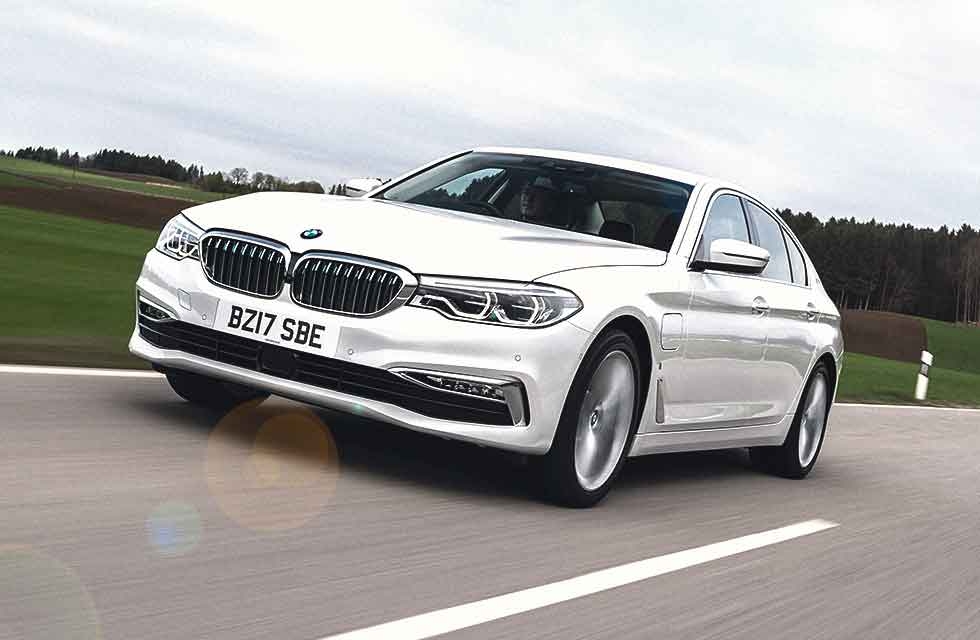 With BMW’s electrification program in full swing, the mid-size executive 5 Series should prove an interesting mix. On the one hand, it’s one of BMW’s more luxurious models, providing much of the opulence of the 7 Series in a more manageable package that will fit better on most people’s drives, let alone their budgets.

So what is it exactly? Using BMW’s now tried and tested plug-in hybrid setup of a 2.0-litre four-cylinder petrol engine accompanied by an electric motor replacing the torque converter in the transmission, the 5 Series’ setup also benefits from additional power with a total of 252hp compared to the smaller 330e, which shares the same hybrid setup (but at the time of writing has been taken off sale). As a car, the 5 Series is built up to a high standard, rather than down to a budget. In many ways, there’s little to differentiate the current G30 generation 5 Series from its big brother, including a gigantic equipment list that would be the envy of Harrods.

Naturally, this is no simple hybrid, however, as crucially owners are given a plug with which to charge the battery via mains supply. Autovolt readers will be well versed with this concept, but what’s not so obvious is certain plug-in hybrids can cost more to run on electricity than petrol. Fortunately, this is not the case of the BMW and a useful electric range of an official 28 miles can be had from a single charge.

That’s not going to set the world alight, but it does make this luxury cruiser capable of driving on electric power alone and consequently achieve an impressive combined 141.2mpg, according to official NEDC figures, while emissions are a business-friendly 46g/km CO2. You’re not likely to get that, because as soon as you travel beyond the real world electric range of 22-miles, the petrol engine takes over. However, in E-Mode, the car can travel at 86mph so it’s not exactly lacking and its perfectly able to remain in electric mode without calling upon its petrol brethren to backup. During my time with the car, a variety of consumption figures depended on journey type: Around town, heading to the local shops and/or train station (maximum of 10 mile return journeys), can be done on electric power alone and consequently ‘infinite’ mpg, in terms of petrol. Beyond that [electric range], the furthest ventured was a 100-mile return trip and the fuel average for the week worked out as around 84mpg. Not at all bad then.

The usual 7-pin Mennekes port is sat on the nearside front wing, allowing simple in the majority of parking situations. More interestingly, the 530e can make use of wireless charging, whereby a pad can be installed on the ground outside or in a garage and will wirelessly charge the battery. As there’s no rapid charging facility, BMW intends for the car to either be charged up at home or work for extended periods or overnight. The battery is a 9.2kWh lithium-ion unit, with 8kWh usable energy, and is mounted under the boot floor which takes up some boot capacity but not so much as you’ll notice.

It’s still plenty large enough to swallow a pair of large-size suitcases, for example. As for charge times, it is reasonably quick, taking just 3.5 hours from a 3.2kW charge port or the wireless charging pad.

The stats appear to deliver the goods with a rapid 0-60 time of 6.2 seconds onto a top speed of a more-than-plentiful 146mph, but the performance never feels particularly rapid due to the muted powertrain and soft suspension setup. This is a similar set of figures to the 525d, although that can’t compete on emissions, of course. That’s not to say the 530e isn’t good to drive, as in typical BMW fashion the driving dynamics are very good. Steering is taught, precise and weighted, offering road feedback without being uncomfortable. Suspension is cosseting not jarring too, impressive considering its 1,770kg weight. And though reading through this paragraph you might be persuaded that the car’s performance is a bit lacklustre, it isn’t. Instead, it’s an interesting if somewhat eerie drive with the powertrain feeling distant despite its immediate response times.

Once electric power runs out, the cars operates like a regular full hybrid – so you never actually run out entirely of electric boost, but on petrol power alone the car certainly feels a lot heavier and more reluctant to shift. Its 252 combined horsepower effectively drops to the 2.0-litre twin turbo petrol unit’s 184hp, but on the plus side it’s much less strained than Volvo’s S90 T8 that puts out 300hp from its petrol engine, for example.

The 530e’s exhaust note is disconcertingly quiet, to the extent it sounds like a pre-recorded computer game. That’s not a criticism but an observation, as this encourages smooth silent progress rather than raucous tyre shredding, which is exactly how a plug-in hybrid should be. If you want a raw performance saloon, BMW will happily sell you something else. The 530e is about economy and efficiency – the iPerformance aspect merely indicates electric power – iPower would be a more appropriate nomenclature (you read it here first).

Like all BMW (not BMW i) plug-in hybrids the 530e is understated. Only a few blue accents here and there accompanied by a couple of badges give a nod towards this car’s electric potential.

There’s the usual muted BMW colour palette of greys, blacks, blues and white, and buyers get a choice of either SE or M Sport trim. The latter doesn’t offer any additional performance and instead adds a few sporty design details like 19” alloys instead of the SE’s default 18s. Buyers can choose a free-of-charge smaller 17” alloy instead of the trim-defaults too, which further accentuates a smooth ride, quieter drive and are likely more economical too (in terms of fuel economy and tyre replacement costs).

Inside, leather is standard across the 5 Series range, but the 530e doesn’t benefit from any plug-in hybrid extras. BMW offers a few useful trim package add-ons, including a technology package that includes a digital key (a bit like a micro tablet to control pre-heating, view electric range and more), as well as head-up display and gesture control. The latter allows control of multimedia systems with gestures in the air. Other packages offer luxuries like powered bootlid and adaptive LED headlamps.

Specific to BMW iPerformance models and included as standard equipment is Connected eDrive Services, which can be accessed in-car or via a smartphone app and aids in searching for open charging stations, as well as keeping the driver up-to-date with charge status and remaining electrical range. It can also be used to analyse and optimise driving style to get the most from the car.

A standout feature that’s well worth ticking the option box for is Parking Assitant Plus, which is so impressive it makes Harry Potter look like a charlatan. It offers a full 360º view around the car using some clever software and from a third person perspective, truly offering an out-of-car experience of the vehicle’s surroundings and makes parking child’s play. What’s more, you can even view this remotely using a smartphone app.

Speaking of apps, one major omission from this BMW is Apple CarPlay integration as standard, while Android Auto isn’t compatible at all. The former is a paid for option, which is a shame on a technological car such as this. That said, BMW’s in-built systems are top notch and there’s rarely, if ever, the feeling that Apple’s finest would be an improvement.

The 530e is perhaps the best all-round BMW. While it’s a series that has grown in dimensions over the year to be greater than that of a couple-generations old 7 Series, it’s a great car with few compromises. It’s powerful, luxurious, sporty and economical, yet without being enormous or massively expensive. With an on the road starting price from £45,810, without the plug-in car grant, it could even be seen as something of a bargain compared to, for example, the likes of the 7 Series iPerformance.

Twin exhausts hint at performance potential; Plug-in port offers conventional charging in around 3.5 hours using a wallbox; Comfortable interior is impressively spacious and well-appointed; Dashboard can be clad in swathes of leather and different trim finishes. Driving modes can be operated from buttons beside the gear selector.

The 530e loves to cruise and is in its element along motorways; Practical wireless charger can be installed in or outside; 2.0-litre four cylinder lies at the heart of the plug-in hybrid system along with an electric motor that replaces the torque converter; Park assist cameras offer full 360º views around the car, as if by magic.