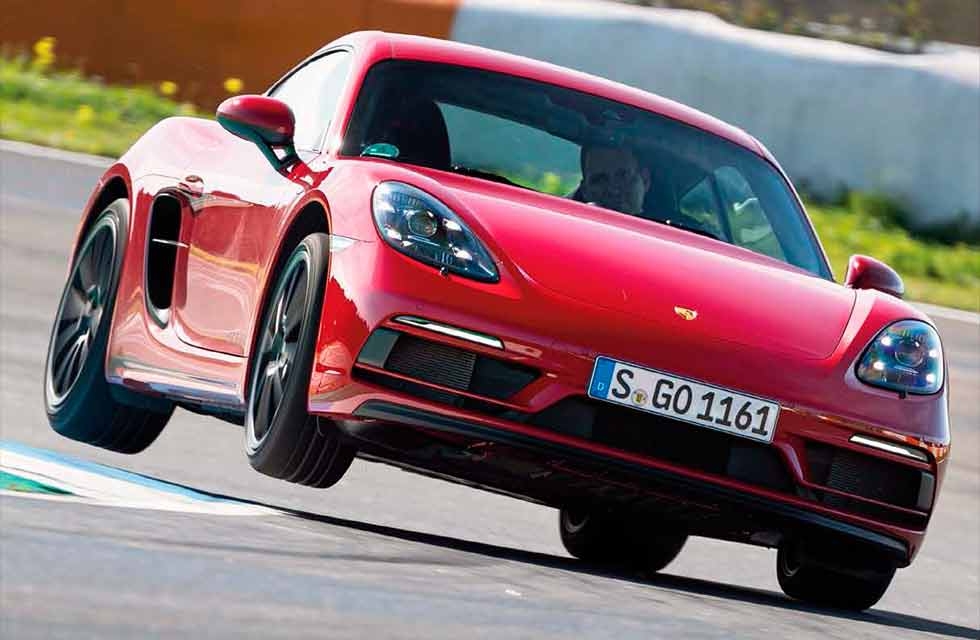 For Porsche the return of the normally aspirated flat-six to the sub-GT 718 982C range is an “emotional’ one, which is another way of saying that the flat-fours have failed to stir anyone’s emotions… Whatever, let’s be thankful for the 400bhp, flat-six, atmo Cayman 982/Boxster 718 GTS 982C. Words: Kyle Fortune Photography: Porsche AG.

First drive in new Cayman GTS 982C, with the not so surprise return of flat-six power.

We listen,” admits Frank- Steffen Walliser, Vice President Product Lines 911/718, and he’s not afraid of confronting the board, repeatedly, to push ideas through.

“We’re in business,” adds Walliser, and while the 718’s sales have dipped in the traditional sports car markets of Europe and the USA, increasing sales in China have offset that. “But we remember too that our business is also emotional,” says Walliser, highlighting that the slow down in sales in those traditional markets can be attributed, in part, to Porsche’s switch of engines from flat-six naturally aspirated to turbocharged four-cylinder boxers.

“Track hero, but we can’t wait to get a Cayman GTS on some proper UK Tarmac”

It was never a case of if the 718 would be fitted with a six-cylinder engine again, then, it was when. At the launch of the range-topping GT4 and Spyder no one was prepared to admit it, publicly at least, but engineering an all-new naturally-aspirated engine for a relatively low volume model in the 718 range seemed like a huge indulgence. What’s perhaps surprising is just how quickly that engine’s been adopted elsewhere in the line-up. Emissions of 246g/km, and the taxes associated with them, means it’ll never reach China, but those other markets, who were so vociferous in their cries for a return to naturally-aspirated six-cylinder power, get it, with the 718 GTS 4.0 982C.

Joy is the emotion, then, unless, perhaps, you’ve not long spent a significant sum on the outgoing 718 GTS at your Porsche Centre. GT4 and Spyder owners might feel a touch aggrieved that the GTS drops ‘their’ engine into a non-GT model so quickly after its launch. Technically it’s identical, too, though as a small concession the power is pegged back to 400hp, that being a scant 20hp less than those range-topping models. There’s been some fiddling to the response at the top end, too, the GT models 4.0 revving to 8000rpm, their 420hp arriving at 7600rpm, while the GTS makes do with a 7800rpm redline, that peak 400bhp output arriving at 7000rpm. Torque remains identical at 420Nm, the cumulative effect of that seeing the GTS trail the GT4 to 62mph by an infinitesimal 0.1 seconds for a time of 4.5 seconds, the top speed slightly back at 182mph.

All are manual, too, for now at least, the PDK, which will gain a ratio as well as paddles, sat in a homologation queue which, along with the similarly two-pedal GT4 and Spyder offerings, won’t see them reach showrooms until the tail-end of this year, if not early into 2021. That’s not an issue from where I’m sitting, Porsche’s six-speed transmission in its mid-engined offering being one of the finest, crispest shifting manual transmissions as any old fashioned traditionalist could ask for, the slick operation of the stick through its gate matched with perfect weighting and positioning of the clutch and brake pedals to enjoy it, properly.

Specifically, I’m sat in the Cayman GTS, in the pitlane at Estoril, Portugal, ready for some fast laps chasing one of Porsche’s hot-shoe professional drivers in a Carrera S. The seat’s just been vacated by a colleague, who commented on exiting: “it feels just like a GT4.” Praise indeed. That’s inevitable, particularly here, when the GTS has been specified perfectly. There’s PCCB brakes, a 10mm lower optional chassis over the already 20mm drop the GTS brings, while the full bucket seats both drop my backside lower into the centre of the car, while holding onto the rest of me in an embracing clutch that benefits not just comfort, but significantly enhances feel.

Throw in the GTS’s usual smattering of Alcantara, and other sporting additions – which doesn’t go as far as adding door straps instead of handles as in the GT4 and Spyder (or optionally in the T 982C) – and that comparison isn’t without merit.

The engine sounds familiar on start-up, too, still stymied slightly by the creep of drive-by noise standards and those necessary particulate filters, but the six-cylinder sound is a welcome one behind you. The standard sports exhaust exits with its two pipes set wider apart from each other, leaving the button inside that activates it wearing a dual pipe symbol that’s not in keeping with the visual outside.

Even rolling down the pitlane, there’s real joy in the first few shifts of the GTS’s manual transmission. It’s beautifully precise in its movement, the weighting so nicely judged, the mechanical nature of it adding some welcome physicality to it without it being in any way obstructive. Yes, that PDK in 2021 will be easier, and, ultimately, quicker, but easy doesn’t always equate to better. A manual transmission in a digital world takes on even greater significance here, as well as appeal. So too does that naturally aspirated engine, it arguably as archaic in its specification as the gearstick I’m using to enjoy it.

The similarities between the GTS and the GT4 are apparent, then, but so too are those between it and the last six-cylinder 981 GTS. It feels like a more polished, faster version of that, which is hardly surprising given the 60hp increase in power, though with that comes a creep in weight, the GTS tipping the scales at 1480kg. That’s masked on the track thanks to the engine’s willing urge, its appetite for revs not denying it low rev flexibility and tractability, it forgiving any laziness with the gearstick should you want to. Not that you would, as even on the track, when rushed, the whole package works with such polish and ease that it’s very quick to get into a rhythm with it.

The Cayman’s chassis has always been one that’s exhibited incredible poise, adjustability and agility, and in the GTS it’s heightened, its faithfulness to input allowing you to take liberties with it, tightening lines with a quick lift, allowing the rear to move around under either weight transfer or simply by using the engine’s ample power to loosen the purchase of the 265 section rear tyres.

It’s such a biddable, playful car to drive, with nicely weighted and detailed steering, fine body and wheel control and sensational brakes. All that feels entirely correct now it’s matched with an engine that’s equally as indulgent and responsive, and so natural in its delivery. If there’s a but it’s that the engine’s not as aurally rich as its 981 GTS predecessor, that one element of the makeup that’s been legislated out of the possibility of re-establishing here.

Elsewhere, the GTS exhibits all the qualities of the best driver’s Porsches, including those wearing GT department badging, yet offering a slightly greater bandwidth. As ever, it’s spec dependent. Jumping into a car without PCCB and 14-way electronically adjusted seats robs it of that ultimate connection, the higher seating position critical here, and enough to have me scouring the specification to check that it’s not riding on a standard chassis. It isn’t, that higher seat only makes it feel like it is, by virtue of heightening your centre of mass, and not holding you so tightly.

On road, in its Boxster relation, that poise and agility remains apparent, the GTS’s ability here arguably more relevant, as if circuits are your thing then the GT4 and Spyder will reward even more. What the GTS is, then, is that bridge between the focus of those above it and the rest of the 718 range, though arguably it’s closer in its feel and precision to the T, rather than the S. Porsche has always been about subtilties, and with the GTS it’s found a perfect balance, and reason for real celebration.

Get one while you can, because there’s an end-of-days feel about the GTS which will inevitably see its demise sooner, rather than later. And forget the GTS badging, too, as correctly specified this feels every bit a GT4 Touring…

It’s such a biddable, playful car to drive, with nicely detailed steering. The Cayman’s exploitable mid-engined chassis can be happily corrupted by 400bhp for this sort of track action In the current bizarre world of Porsche transmissions, the Cayman GTS comes in manual form only, whereas over a year down the line, a manual 992 is still a promise rather than a reality.

Full fun factor comes standard with return of a normally aspirated flat-six to the 718 Cayman/Boxster Range.