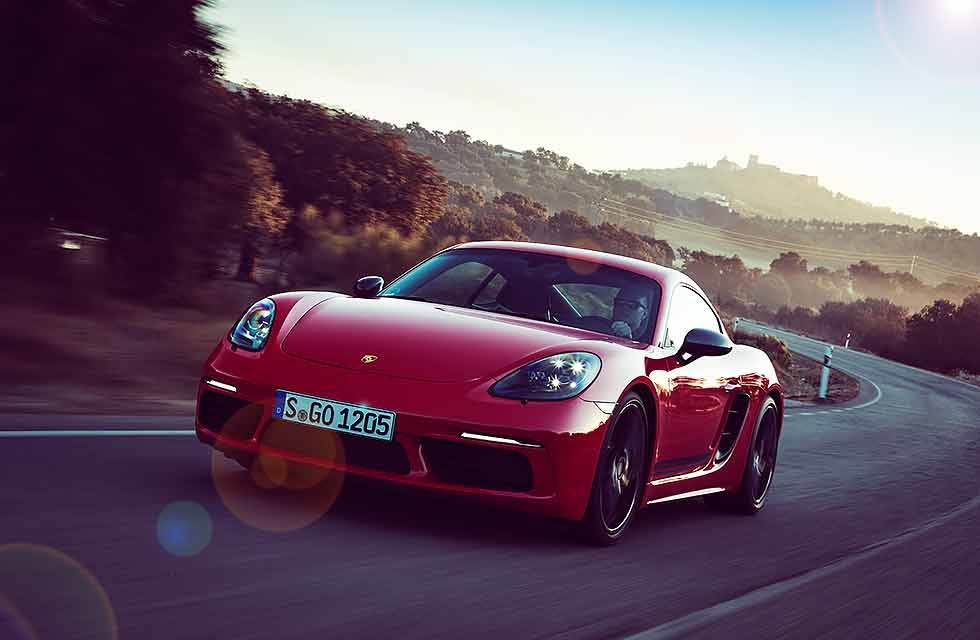 718 T FIRST DRIVE  Driver focused 718 T model brings more spec to the party for Boxster and Cayman than you might imagine for the money.

To enthusiasts of the Porsche marque – like the esteemed readership of this magazine – the history of the ‘T’ honorific is technically a long one. It was back in 1967 that the 911 T was first produced, with its 110hp, 2.0-litre, six-cylinder engine placing it at a level below the more potent 130hp 911 E and rendering the 911 T as what, 50 years ago, might have been termed ‘entry-level’.

Fast forward a few decades, though, and the ‘Touring’ badge had not been used in a long time. But then, towards the end of the 991’s life cycle, it reappeared on a slightly more driver-focused version of the 370hp/450Nm Carrera – one in which you could junk the rear seats and the Porsche Communication Management for a circa-20kg weight saving over a near-equivalent Carrera.

The Porsche 991 Carrera T 991.2 turned out to be something of a masterstroke. Providing the most affordable way into a 911 that had more of an enthusiast bent than even the standard cars possessed, it was still priced a long way shy of the GTS and hugely desirable GT products further up the rear-engined icon’s range. In short, it did precisely what Porsche wanted it to: blessed the Carrera with the sort of customer love that the higher-end 911s enjoyed.

So, having that blueprint for success in the bag, it seems only sensible for Porsche to turn its attentions to the 718 twins and give them with the same sprinkling of magic. As the 718 Boxster S and 718 Cayman S have the GTS models to develop their 2.5-litre, 350hp character further, so now the 2.0-litre, 300hp ‘regular’ 718 have the T models. These bundle in much of the most desirable optional kit for the 718 Boxster/Cayman variants for less of a price walk than specifying said items individually would cost, and then there’s also an upgrade that isn’t even available for the 718, plus an intriguing delete-it choice.

“The 991 Carrera T turned out to be a masterstroke”

Not that Porsche could save that much weight on the two-seat 718 cars, of course; unlike the 911 Carrera T 991.2, there are no rear seats to be removed here. The PCM is, however, as per the 911 T, not fitted as standard, its place in the centre stack taken by a pair of rubberised shelves – but customers can option the PCM back in at no cost. And, apparently, if the take-up of PCM on the 911 T is any yardstick, then almost all 718 T owners will have the satnav and stereo fitted.

Porsche therefore doesn’t cite any official ‘weight saved’ number for the T models, and nor does it offer any more output from the mid-mounted boxer-four than its usual 300hp and 380Nm figures. Both Boxster T and Cayman T come with a six-speed manual gearbox as standard, but the PDK seven-speed transmission is a £2303 option, and one that trims four-tenths of a second from either car’s 0-62mph time, thanks to the Sport Chrono Package. The PDK cars also get the Sport Response button, for maximum overtaking readiness. A variety of eye-catching colours, such as Lava Orange, Miami Blue and Racing Yellow, complement the exterior ‘718 T 982C’ graphics on the doors, while Titanium Grey 20-inch Carrera S wheels and Agate Grey door mirror caps are thrown in to give the 718s more visual attitude.

All very nice, but mainly just aesthetic glitter, so far. The really juicy stuff for the 718 Boxster T and 718 Cayman T, then, comes when you dig further into the mechanical side of the spec sheet. Aside from the aforementioned Sport Chrono and bigger wheels with grippier tyres, the 718 Ts gain Porsche Adaptive Drivetrain Management engine and gearbox mounts, Porsche Torque Vectoring with a mechanical diff-lock on the rear axle, a Sports exhaust system and, the biggie, the Porsche Adaptive Suspension Management chassis that sits 20mm lower to the ground. It’s this last item that makes the T so worthwhile, as it cannot be specified for any money on the regular 718 pairing.

Inside, the anticipation of how the T will drive is ramped up by an Alcantara-clad, 360mm GT Sport steering wheel, plus the use of Sport-Tex upholstery that can feature bright stripes of the exterior colour to lift the ambience. The door pulls are fashioned from fabric loops, which – again – can be finished in lurid shades, as can the contrast stitching around the cabin. The ‘718’ logo is embroidered onto the head restraints of the seats and ‘Boxster T/Cayman T’ graphics adorn various spots of the passenger compartment, most notably in the five-dial instrument cluster.

So, not a transformative package of additions to the 718 twins, but rather one that seeks to subtly massage what was already there. And the resulting car might just be the best road-biased 718 of the lot. Seriously, there are times driving the 718 Cayman T where you’ll be wondering why you’d ever need look at the GTS instead – and this will be most firmly crystallised if all you’re ever going to do with your Porsche is drive it swiftly on the road.

For that purpose, the T is near-faultless. While it’s the least powerful production Porsche sports car in the current range, the sheer strength and reach of that turbocharged 2.0-litre engine cannot be ignored. Through each of the long, first four gears of the sweet-shifting manual gearbox, it can pull from 1500rpm to its 7500rpm redline with a real venom. Perhaps the T’s biggest drawback is the one that has afflicted all 718s since Porsche resurrected that numeric, that drawback being the anodyne soundtrack – the car sounds good as it revs out and there’s a certain appeal to the occasionally heard boxer ‘burble’, but after the zingy wonder of the old flat-six, it’ll never quite hit the same notes.

The chassis, though, is simply delightful. The way the 718 Cayman T switches direction in high flick-flack manoeuvres is quite breathtaking and there’s an extra, nuanced layer of feel to its rich steering, courtesy of the fatter tyres up front. With rock solid body control and yet enough flex in the PASM dampers to allow the car to breathe with the road surface, get the 718 Cayman T hooked up and it will deliver a mid-engined driving experience every bit as thrilling and involving as you might expect of the Stuttgart brand. It is, in short, magnificent in every detail, and hard to believe it is just a mildly breathed-upon regular 718.

As to the Boxster T, it doesn’t seem to lose anything in terms of the scintillating driving experience to its Cayman sibling. If anything, there’s an argument to be made that its open roof manages to alter the most unfavourable noises of the engine and exhaust, as the rear resonance chamber of the Cayman’s cabin has been replaced by a fabric (or open) roof that also introduces additional wind noise to quell the boxer’s exertions. The PDK is excellent, too, with beautifully weighted paddle shifts, but if we’re being honest, our hearts will always be drawn towards the Cayman over the Boxster. And, when it comes to making the perfect T, you need to keep it simple: coupe, manual, no PCM. Be brave and do that come ordering time, and you might just be getting one of the best Cayman driving experiences yet.

20in wheels are standard fitment. PCCB discs and calipers are not, but they certainly add to the stopping power. Is the 718 T Porsche’s best and most focused driver’s car? Yes, we think it probably is. The 718 T in both Cayman and Boxster guise comes standard with a whole bunch of tech goodies like PASM, Torque Vectoring, Active engine mounts and LSD. Superb Sport seats will keep you firmly in place. 718 Cayman T in familiar launch colour and subtle side decal. Looks good offset with black wheels Alcantara interior fittings add a tactile element. Note PCM delete on test car. Manual six-speed ’box the only way to enjoy the driver focused T.