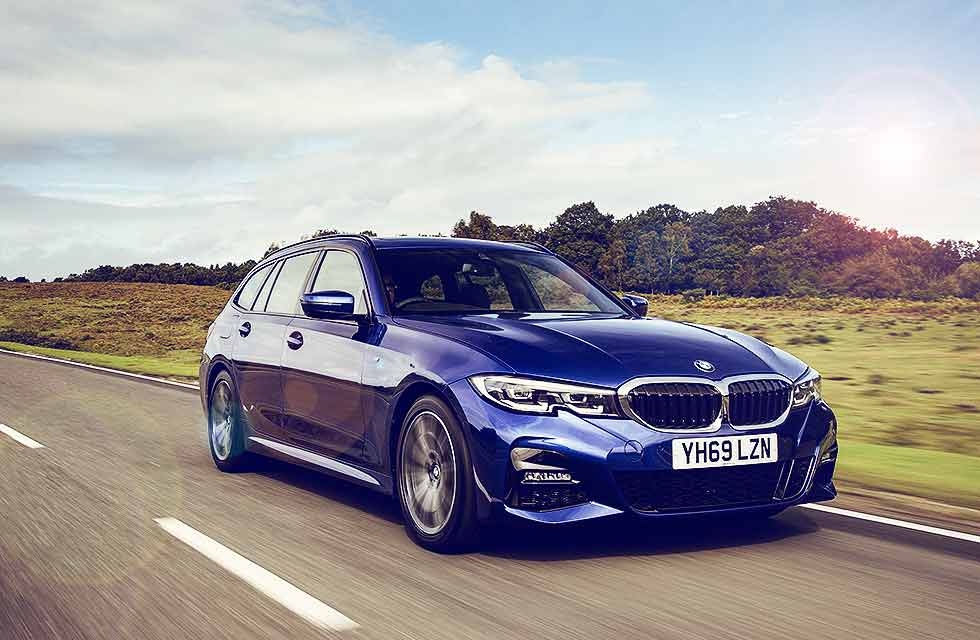 Everything changes, yet everything remains the same: the G21 320d Touring is the only 3 Series anyone needs… Words: Shane O’ Donoghue. Photography: BMW AG.

At the international media launch of the G21 BMW 3 Series Touring earlier this year, we metaphorically drooled over the sole model provided for test, the exceptionally talented 330d xDrive variant. It’s difficult to think about boot space, folding rear seats and the practicalities of fitting child safety chairs into the rear of a car when it has a 265hp straight-six diesel with stump-pulling torque under the bonnet and BMW’s sublime xDrive chassis underneath. Perhaps that’s the point of such a car – offering the family buyer the distraction from the mundanities of family life.

So, now that we’ve had a chance to sample a rather more prosaic version of the 3 Series Touring, the new 320d, you’d expect a better-balanced review that focuses as much on the fact it’s an estate as it is a BMW, right? Apologies in advance but, without wishing to spoil the surprise, the 320d xDrive Touring tested here in right-hand-drive format for the first time, remains exceptionally good to drive and nothing short of desirable to own.

That’s despite being two cylinders down on the 330d G21. However, and something that isn’t immediately obvious (given identical power and torque figures to the previous generation), the 320d uses a new engine. It now has two turbochargers and higher fuel injection pressures than before (among other updates). A small high-pressure turbo with variable geometry and a large low-pressure item work together in a variety of ways to enable higher torque at higher engine speeds than before, while also, crucially, meaning lower fuel consumption at part-load, which is where, let’s face it, most driving is done. On the road, it feels smooth, powerful and effortless, even if the noise it makes can’t compete with the six-cylinder thrum of its bigger brother. Nonetheless, it’s considerably more economical and much cheaper to run.

Anyway, outputs of 190hp and 295lb ft of torque are plenty for the rear wheels to be dealing with, by any measure. And, while the latest 3 Series chassis with its wider track and super-quick electronics has better traction than ever, we think that xDrive four-wheel drive is the way to go here, especially in the Touring estate body style. This, I should add, is coming from a person that adores driving and vehemently hopes BMW sticks with a rear-drive chassis layout for the majority of its cars forever. You see, as brilliant to drive as the 320d Touring is, it’s just not the sort of car that many are going to want to slide around the place. Admittedly, a few keener drivers that need the long-distance frugality of the diesel engine might still want an engaging chassis for when the opportunity to exploit it arrives, so they can still choose not to pay the extra for xDrive. That’s a modest £1500 premium like-for-like (though the manual version of the rear-drive 320d is cheaper again) and I’d suggest that the xDrive car will be easier to sell on and therefore more valuable later in its life, which would feed into finance payments as well.

Sensible hat aside, the xDrive-equipped 320d is hardly a wallowing, understeering mess in the corners. Its steering doesn’t feel notably different to the rear-drive car’s, it’s quick to sniff out an apex and the chassis has the delicious neutrality and balance that has long been a hallmark of the BMW 3 Series. Drive it at normal speeds and it’s a satisfying conveyance, both refined and assured. The damping feels expensive and the car maturely deals with bumps and undulations in the road surface. Sure, it can be a little firm over deep potholes and other imperfections, but the flipside is rock solid body control in all situations. Then, once the kids have been dropped off to school, and you have a chance to test the chassis a little more, it initially feels like an xDrive badge has been stuck on the back in error. That’s because, under provocation, the rear tyres gradually relinquish their grip, easing into controllable oversteer, just for a split second, admittedly, but that’s long enough for you to feel that this is a true 3 Series. Keep the throttle pedal down and you’ll then feel the xDrive system send some power to the front wheels, resulting in a smooth recovery of traction all-round and a slingshot out of the corner toward the next one. It’ll make you smile, which is job done by the chassis engineers for anything with a BMW badge on the tailgate if you ask me.

That tailgate, incidentally, is electrically opened and closed as standard and the glass section may be opened separately, which is always useful. There’s 500-litres of luggage room inside under the luggage cover when the rear seats are in place, or 1510 litres with those folded down and the cover neatly stowed underneath. Yes, there are many estate cars that better these figures, but very few that will have you drooling in anticipation for a drive in them like the 3 Series Touring manages – even in 320d xDrive guise.