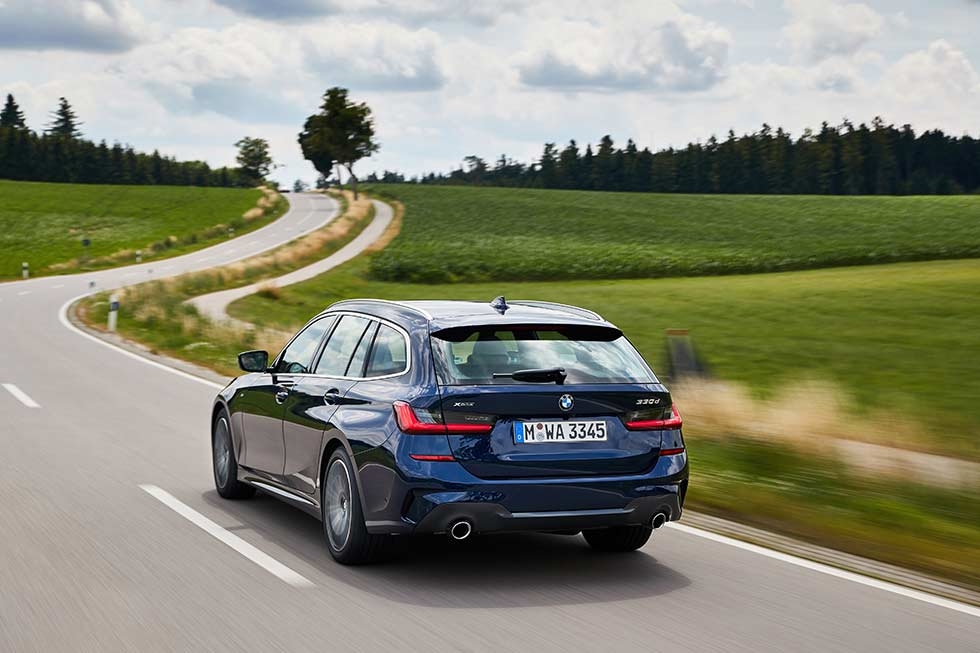 When all around you the world is going mad, it turns out you can still rely on BMW to build an excellent 3-series Touring – especially when equipped with a six-cylinder diesel. And if it’s impossible to gaze upon that chamfered front grille without being reminded of a toast rack, at least its dimensions are in line with the rest of the car, which has a sense of proportion that seems to be rapidly going out of fashion in Munich.

You’ll get a 320d Touring G21 from £35,235, but this all-wheel drive 330d xDrive G21 is £43,065. It’s a superb all-rounder, melding a magnanimous driving experience with a level of practicality that’s enhanced by some delightful details. There’s irritating stuff too, but as a whole this is BMW and this is Estate Car, both done very well.

The BMW part is the way it drives: 261bhp isn’t loads these days but 428lb ft out-thumps everything in the range with buttery sixuality, hitting not so much like a hammer as with the smooth, relentless immediacy of a catapult that chucks jet fighters off a ship. xDrive assures absolute traction in the dry, but is otherwise unobtrusive in its use of the front wheels. It’s self learning now, so the more you drive in a rear-biased manner – especially with DSC off – the more it behaves like a rear-drive car. The optional e-diff helps here.

Outfitted with the also optional adaptive M suspension, it rides badly rippled German asphalt with a poise that only occasionally suggests the UK’s troubled tarmac is going to be a backache. The eight-speed auto is eager to please, the steering twitch-quick but perfectly in sync with the power delivery – in the heftiest Sport setting at least; go lighter than this and it becomes vague around the straight-ahead in a manner that removes a chunk of your confidence in the car. There’s a choice of driving modes (Sport Plus all the way), state-of-the-art driver assistance tech, and a 25 per cent stiffer structure than before. The Touring carries a near 100kg weight penalty over the saloon, but still has 50:50 weight distribution and rips up a wriggling road with great glee. God, it is good.

Estate-car enhancements come in the form of greater usable space for passengers and luggage, and some clever tricks. Though overall boot volume has grown by only five litres (to 500), the area you mostly use is 32 litres larger and the openings are bigger, including the independently- opening rear window. You can also add a set of rails in the floor with rubber sections in the middle that rise up when you close the power- operated tailgate, so your gear slides in easily but is then gripped in place. Theoretically.

Irritations? The interior is as bland as a new-build house, there are some questionable trim finishes, and the ever-expanding screen acreage hasn’t kept down the button count. And what’s with the fat-boy steering wheel? The iDrive OS 7.0 media suite is fine enough, but the ‘Hey BMW’ voice assistant is slow-witted compared with ‘Hey Mercedes’. Though supposedly this was due to poor network coverage. In Germany. Where the car is built.

The ultimate everyday driving machine? In this spec, it’s hard to disagree – but it doesn’t come cheap and there are rivals with bigger backsides ★★★★★

The boot’s vast: bigger in every dimension than its predecessor, with up to 1510 litres of space

3.0-litre diesel goes like the clappers, and the chassis is so well sorted you’ll be making the most of it

Tyres have screamed, luggage has begged for mercy… and we’re still waiting for ‘Hey BMW’ to answer a question properly

PLUS  +  More practical than ever, still great to drive

ON SALE Now, deliveries in September

Only 261bhp. But 428ft lb out-thumps everything else in the range with buttery sixuality