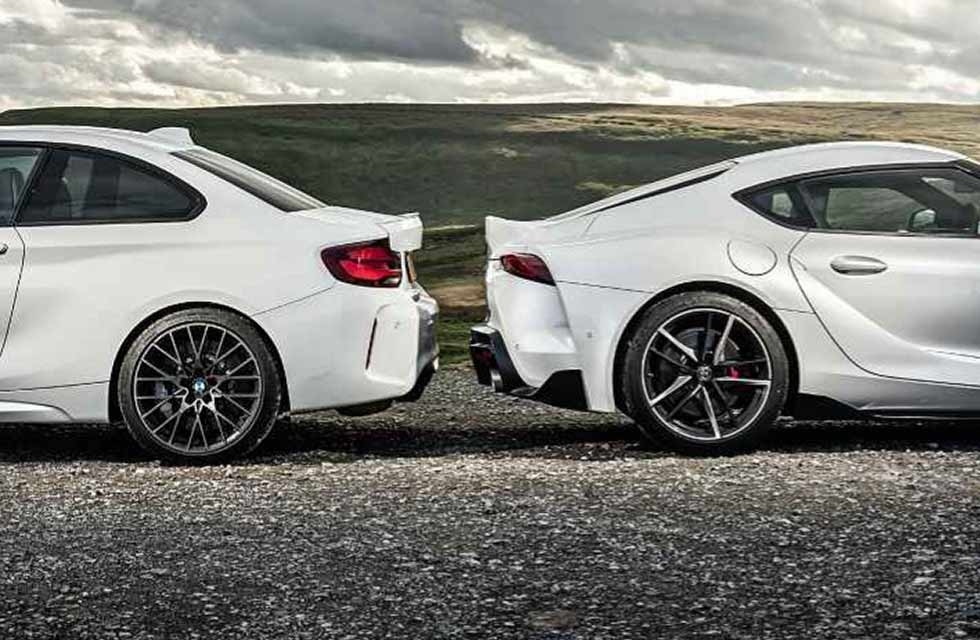 The new Toyota Supra has more than a little BMW beneath its skin, so how will it compare with the real deal – the similarly priced BMW M2 Competition F87? Words by Antony Ingram. Photography by Charlie McGee.

The new Supra packs more than a little BMW hardware, so how does it compare to a similarly priced, 100 per cent BMW offering?

Hump. the familiar sound of four wheels briefly leaving terra firma over a crest. There’s a momentary flare from the BMW in-line six before a four-square, finely damped landing. No shudder, no scuff of low-hanging plastic on asphalt scored by previous, less successful touchdowns.

Guess the car. The engine reference might have given it away in a group test in the past, but today you can’t be so certain. It could apply to either of the cars we have here, or indeed the Morgan on the following pages.

Twenty years ago, if you’d been informed of a new sports car powered by a BMW straight-six, there’d have been few complaints, but in 2019 it’s caused quite some consternation. The car in question is the new Toyota GR Supra, which doesn’t just use a BMW engine but also the matching ZF automatic transmission and a significant number of BMW underpinnings and ancillary parts.

The problem isn’t that there’s too much BMW, rather that there’s too little Toyota for a car whose heritage is so revered by so many. As platform and component sharing become ever more commonplace, identity is a commodity in increasingly rare supply. Previous Supras were rarely world-beating sports cars, but they were undoubtedly Toyotas, for better or worse. The latest is neither a product entirely of Aichi nor Munich. And it’s built by Magna Steyr in Graz, Austria. Some of the old Supra’s identity was thrust upon it by videogames and by Hollywood, of course, but it may take a while for the A90-generation car to develop the same following.

Despite this, parking the Supra alongside BMW’s M2 Competition F87 actually serves to highlight how much the Supra does differently. Granted, these two aren’t platform mates – the Supra’s organs are Z4, not 2-series – but both share an engine layout, power their rear wheels (ironically, something future 2-series won’t be doing) and feature commonality between minor controls. They’re also priced close enough to make things interesting for the newcomer: the Supra starts at £52,695 (this ‘Pro’ model, with leather seats, a head-up display and other toys, costs £54,000), while the M2 Competition is from £51,150.

Yet the Supra feels the more instantly special. It’s very visibly a compact, low-slung sports car, and the M2, even in Competition form, is a chunky, upright two-door saloon. Neither is beautiful, but the Supra probably gets closer to the traditional definition of a sports car, with its long clamshell bonnet, short cabin and pin-up curves.

The M2 is butch. A normal car striving for something more. You’d struggle to call it conventionally attractive, even in context of BMW’s current aesthetic nosedive, but then a Delta Integrale or Clio V6, themselves pumped-up ‘regular’ cars, were no less appealing given similar treatment. Those in the know will admire the M2, but it attracts fewer glances from the less automotively literate.

Under the skin, roles reverse. When the M2 first arrived, it, like the 1-series M Coupe it followed, didn’t use a dedicated M engine but a tweaked unit from the mainstream range. The M2 Competition F87 changed that, swapping its N55 straight-six for the comprehensively uprated S55 from the M3 F80/M4 F82, the stronger block, high- performance components and twin turbos resulting in greater output: 404bhp and 406lb ft of torque.

The Supra, in contrast, uses a single-turbo engine BMW calls the B58, which effectively replaces that old N55. It’s technically more advanced than the unit it supersedes, featuring upgrades such as a closed-deck block, as found on the M engine. But the Toyota’s 335bhp and 369lb ft of torque mean it’s turning up with a significant disadvantage even before you start getting dewy-eyed about the M2’s heart being a ‘proper’ M unit.

And then there’s what you find between the seats, and I don’t mean the detritus from hastily consumed provisions en route to Yorkshire. The Supra is, for the foreseeable future at least, equipped solely with that eight-speed automatic transmission from ZF, as used by seemingly half the industry. If you tick the right (or some might say wrong) box you can get an auto in the M2 Competition too, a seven- speed DCT, but it’s the six-speed manual we have here.

I’ve joylessly played with the Supra’s paddles once or twice on the journey up, so I take the opportunity to become reacquainted with the BMW for the drive to our first photography location. M3s and M4s feel like big machines these days, but sitting behind the Comp’s chunky wheel is like putting on a perfectly tailored suit.

You’re conscious the wheels are jutting out from each corner just a little further than on a regular 2-series, but the M2 still feels relatively narrow and no less wieldy than a hot hatchback. The driving position is conventional – there’s good adjustment in seats and wheel – but with plenty of glass around you and a bonnet disappearing away from view, it’s familiar rather than racy.

There’s a busy feeling too, from the moment you press the starter button to the first few yards once you’re underway. Not harsh in either sense, but purposeful. And thanks in no small part to today’s choice of gearbox, intuitive.

As the national speed limit signs flash past, you’ve got a few options. Third will get you up to speed merely very quickly, while second is a stampede. It’s not an emotive, howling engine, this S55, but the response from low revs, the unending mid-range surge and the strident top end give the twin-turbo six real breadth of ability. Choose second and you’ll soon be swapping into third anyway, at which point the gearshift – short, notchy, ever so slightly sticky – and subsequent reapplication of power is accompanied by a bark from the airbox.

Unleash the Supra in the same way and it’s altogether smoother. Surprisingly, not much slower either. Perhaps that’s because, as the internet is finding out, Toyota’s latest star seems to put more to the rear wheels than the official figures suggest, or perhaps it’s because you sit so much lower and view the world through a letterbox and over a bulbous snout. Like the M2, the Supra feels relatively compact, though limited visibility in all directions means you pick your path a little more carefully, and the world can disappear completely behind the bonnet over some crests.

The driving environment is more inviting than the BMW’s, and while the shared components are clear, there are just – just – enough details to mark it out as something different. Not as a Toyota necessarily, but the digital instruments (attractive, but the needle on the virtual rev counter doesn’t catch the eye), steering wheel, sculpted seats and cosy cabin all feel unique in this company.

Then you clock the parts-bin gear selector and the apologetic plastic paddles, and your heart sinks slightly. There’s little inherently wrong with automatic performance cars, and nothing the ZF eight does particularly badly either, but from the moment you get moving it fails to gel with the Supra’s ethos. Left in auto, changes slur GT-style, and you’re up in fifth or sixth before you’re really rolling. Having to systematically click the Sport button, shift the lever across to manual and click down several gears to summon a lower ratio not only lacks tactility but also feels like a right old faff compared to just making a single gearchange and then booting it in the BMW.

‘PREVIOUS SUPRAS WERE RARELY WORLD-BEATERS, BUT THEY WERE UNDOUBTEDLY TOYOTAS’

The Supra’s sound is more cultured, and while it does hammer through ratios quickly enough with each flip of a paddle, it never stops feeling like a layer of interaction has been removed. A chuff from the turbo plumbing and obligatory crackles from the exhaust each time you back off the throttle are just lip service to what could be a much more engaging drivetrain with three pedals and a stick.

Still, we’re making good progress. The paddles certainly make things easy, and combined with low-effort steering weight and surefooted lateral grip, the Supra breeds confidence up here, where all there is between you and an uncomfortable tumble through the heather is plastic bollards. You can thread it along at quite some speed without worrying that the front may not bite, the suspension might run out of ideas (such as landing after a crest…) or the brakes may wilt under pressure.

Only when corners get tighter and more frequent does the Supra begin to feel its weight, and you start muscling it around rather than flicking it to and fro as you would its smaller GT86 sibling. The tightest turns are an invitation to play around, but most of the time the Supra summons good traction from its 275-section rears. It comes as a surprise to discover that’s more rubber than on the M2 Competition.

If you had to guess, you’d expect the M2 to be running the wider Michelins. The steering has more heft to it, and the grip the M2 extracts from the surface makes it feel like it’s running Can-Am barrels. Understeer clearly wasn’t in the Comp engineers’ lexicon, and everything, from its responses to the way it deals with irregularities underfoot, is a notch tighter than the Supra. Where the Toyota sailed over cattle grids the M2 requires more circumspection, but the trade-off for a busier ride is more immediacy to its reactions, perfectly in tune with its more aggressive drivetrain.

It’s this, plus a confluence of other factors, which gives the M2 the clear edge in this company. The Supra – be in no doubt – is a very good sports car. It’s capable, fast, wieldy, and looks the part. But it also fails to get under your skin. It does everything well, but nothing exceptionally, and while the money is about right for the performance and quality on offer, by comparison the M2 Competition is a conspicuous bargain at its sticker price.

There’s hope for the Supra though. Toyota hasn’t yet broken out the full GRMN badge for its new sports car, and BMW must have a few S55s and manual transmissions cluttering up a room somewhere in Munich…

Top right: BMW influence is hard to miss in the Toyota’s cabin. Right: Supra has the more overtly sporting form, but the M2 has the more focused BMW ingredients underneath