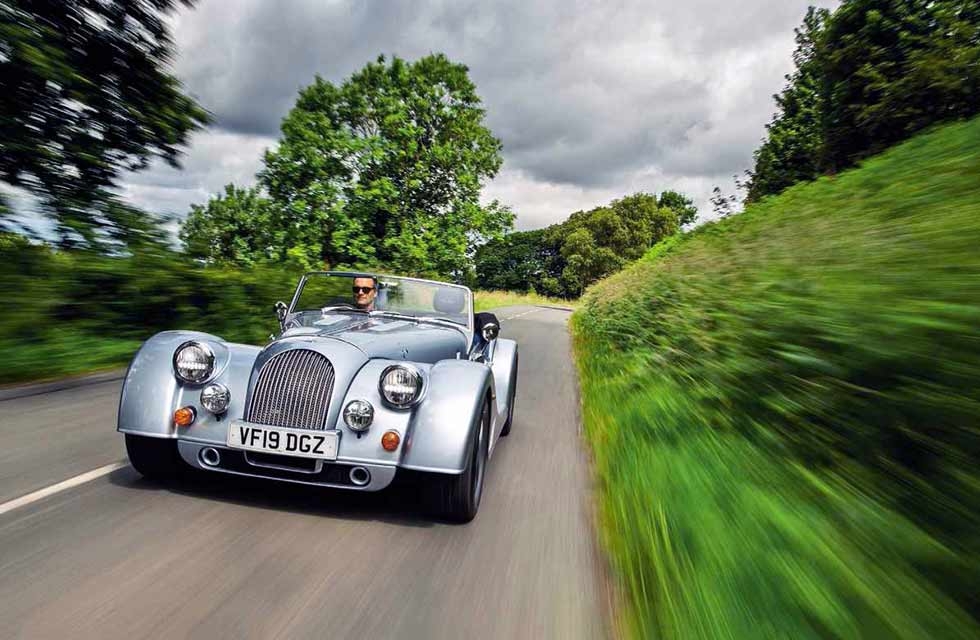 The new Morgan Plus Six is powered by the same BMW engine as the latest Supra, making this the company’s first turbocharged car. But is this melding of modern and traditional still a winning recipe? Words by Adam Towler. Photography by Aston Parrott.

Hit for six – Another BMW borrower, Morgan’s new Plus Six features the same engine as the Supra, which makes it the first turbocharged car in the company’s history. Is it a successful transplant?

Mmm, the rich scent of freshly cut grass. Hot engine smell, too. I can see the thermal haze escaping from the long, fluted bonnet, feel it on my cheeks, and after a particularly heavy stop I can also smell the expulsion of brake dust off the front discs. It’s driving stripped back to its fundamental constituent parts, but experienced in glorious, ultra-sharp 4K HD. To the side, the doors are cut so deeply away that my torso is alarmingly exposed: balmy Worcestershire air laps enthusiastically around my body. So far, so Morgan. And then, KA-CHOO! Excess boost pressure being released, in a manner more like that of a JDM hero cruising the high street on a Friday night…

It may look to most people like just another car from the firm’s 110-year history, but this is the new Plus Six, and for the small Malvern-based company it really is a whole new world. Consider that it’s the first Morgan to exist entirely in CAD, the first turbocharged Morgan, the first to use a straight-six engine, the first to be designed in metric units, the first under new owners no longer related to the Morgan family. And to be fair, while it may look very similar to what has gone before, look again, much more closely, and it’s crisper, more confident, more purposeful: note how the wheels perfectly fill the arches, how the shut lines are more modern.

THE MORGAN PLUS SIX LEAPS FORWARD UNDER EVEN THE SLIGHTEST PROVOCATION’

The new-generation CX platform is once again a bonded and riveted aluminium structure with an English ash frame attached, but technology has come a long way since the original Aero 8. The platform is now twice as torsionally stiff as before, but no heavier at 98kg, and contributes to this car weighing 1075kg ‘dry’. That’s an awful lot less mass than BMW’s B58 single-turbo straight-six is used to pushing around in its other sports car applications, the latest Z4 and, of course, the new Toyota Supra. The engine makes 335bhp and 369lb ft of torque, and also importantly for Morgan emits just 170g/km of CO2 in this application, allowing the company to sell this car in many more markets.

There’s one other key factor I haven’t yet mentioned: it’s automatic only. Just like in the 3-litre versions of the Z4, and the Supra, the eight-speed ZF torque-converter is the only transmission available, although Morgan admits there’s no fundamental reason why a manual ’box wouldn’t fit in the new chassis, or, for that matter, other engines from the BMW family.

In the Supra, not having a more dynamic ’box seemed like a real failing to me, so I’m very nervous that it will prove a real mismatch in the Plus Six. Commercially, it’s unlikely to be an issue, because the majority of buyers chose the auto on the old V8, but even so, does it send the right message when this could be one of Morgan’s USPs?

I needn’t have worried. Right from the off, the powertrain in the Plus Six is hugely impressive. Morgan says BMW engineers were heavily involved in its installation and development – as they were when the first BMW-engined Morgan, the Aero 8, was being developed – and it’s obvious that for them it was a labour of love, not a commercial chore. When you’re just pootling around town or rolling down a country lane, the smooth-shifting and responsive auto makes a lot of sense, but for the most part I drive it in manual mode, activated by the incongruous modern BMW shifter protruding from the centre console being pushed over to the left, and a press of the Sport+ button for the quickest shifts.

You can use the shifter to change gears, but I use the paddles, and here Morgan has played an ace by switching from the horrible little BMW items to much larger ones lifted from the PSA parts bin. Not personalising them with some beautifully milled metal touchpoints from the Malvern Link workshop is an opportunity missed, because the cheap plastic looks very much like it belongs in some leaking Citroen Pluriel with the dreaded single-clutch ’box, but their operation is surprisingly precise and tactile, and it makes changing gears manually much more of a pleasure. It also helps that the gearbox seems to have excellent calibration, but most of all it’s the fact that the Plus Six driving experience is so damn exciting, roof up or down, that not having the interaction of a gearlever and clutch pedal is nothing like the factor it is in the refined and artificial-sounding Supra.

How exciting? The Plus Six rips from 0 to 62mph in just 4.2sec, but trust me, it feels far, far quicker than that. The optional sports exhaust fitted to this car delivers a wonderful and regal straight-six roar, overlaid with all manner of pops and explosions from the rear pipes. It’s so comically urgent and responsive, the motor instantly dumping such a massive amount of torque through the rear tyres (bespoke Avon ZZ5s, soon to have their own Morgan stamp) that the Plus Six simply leaps forward under even the slightest provocation.

Other than the car’s pace, what’s also immediately obvious about the Plus Six is how much more modern it feels from the moment the wheels begin to turn – a hard to define but tangible sense of integrity and togetherness never quite achieved by the previous generation car. There’s no unwanted slack or imprecision with the steering, and as soon as you have more than a few degrees of lock on then the nose begins to dive rapidly in the intended direction of travel, to such an extent that it’s imperative to not be overly aggressive with your inputs otherwise you’ll needlessly upset the car.

The ride is firm at low speeds, a constant jiggle over poor surfaces providing that traditional sports car feel, but the chassis is notably softer under higher loads, particularly on the four-link rear axle, although the exaggerated change in weight distribution makes it a very easy car to read. With no traction control, only ABS, that becomes very important. It also makes the Plus Six a huge amount of fun: even in the dry, oversteer is just a squeeze of the throttle away in most of the lower gears. The Plus Six brings out the real inner hooligan, even if most onlookers would assume you’re more likely to have a picnic hamper strapped to the rear bodywork and a panama hat stored behind the seats in the now larger luggage area.

As for the interior, it’s currently a mix of the good and not-so-good. A 20mm growth in wheelbase has liberated more legroom, but personally I still feel like I sit too high on strange seats with completely flat bases – they offer nothing like the support required in a car of this performance. The instrumentation is a bit basic, and it may just be the spec of this example and the fact it’s a development machine, but for me it lacks the sense of theatre that the rest of the car exudes, particularly given the Plus Six starts from £77,995.

Nevertheless, that shouldn’t take away from the fact the Plus Six feels like a genuine triumph for Morgan. That we should even be thinking about the tiny company’s products in direct comparison with cars from global manufacturers speaks volumes about a terrific sports car with an infectious sense of fun.

Left: 19-inch alloy wheels seen here will be fitted as standard to First Edition models, with 18- and 19-inch options available on subsequent Plus Sixes. Below: paddles are plasticky, but are nevertheless a distinct improvement on the ones that usually accompany BMW’s B58 3-litre (far left)