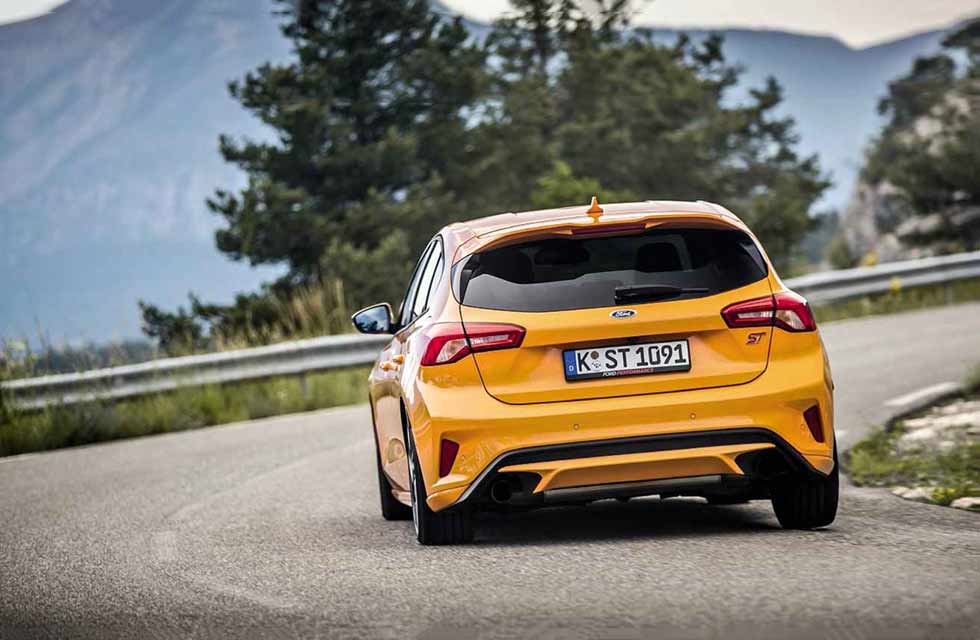 Mojo rediscovered. After too long as a hot hatch also-ran, Ford’s Focus ST is back on form, reinvigorated and ready to take on its class rivals. Words by John Barker.

The new 2020 Focus ST should be the car to get Ford right back into the fast hatch game. The previous version was lacklustre: it struggled for traction due to its lack of a limtt’ed-slip diff, and was outperformed by newer rivals with more tech and more power. One car in particular exposed the old ST’s shortcomings: the Hyundai i30 N Performance, which seemed to land from nowhere but was instantly on the pace, fully equipped and good value too.

An ST is harder to get right than an RS, say Ford engineers, because while there’s a single-minded dynamic focus about an RS that customers understand, expectations of the ST are much broader. It’s expected to be a Swiss army knife of a hatch; a perfectly comfortable family car at one end of the scale and a handy trackday tool at the other… with great B-road ability in-between.

To deliver the required bandwidth, Ford has given its new ST the same key technology as its rivals, namely adaptive damping (Continuously Controlled Damping, or CCD, in Ford speak) and an electronically controlled limited-slip differential. It has also given it a detuned version of the 2.3-litre turbocharged in-line four from the last Focus RS.

In the ST it delivers the class standard 276bhp but with a generous 310lb ft of torque – increases of 29bhp and 45lb ft over the old car – and drive is sent to the front wheels only.

Ford has also developed a unique tyre for the ST with Michelin to give the desired handling characteristics, which are quite distinct from those of other hatches. We were able to experience the ST’s on-limit character at Ford’s Lommel test track in Belgium ahead of the full launch on roads in the south of France. Ford’s feeling is that with modern stability control systems there is no need to build- in understeer; instead, let the car turn, use the tail to help it do that, and catch any tail slide before it develops too far.

To this end, the Michelin Pilot Sport 4 S that has been created for the ST performs very well under pressure on the front axle, helping it turn keenly and keeping the nose on line, while with a lift of the throttle the rear can be provoked into slip, which it does progressively and then recovers neatly, making it an exploitable effect. With the help of torque-managing hydraulic plates in the driveline that can deliver 100 per cent of the drive to whichever front wheel has the most grip, and the support of traction control if needed, the front-end grip of the ST feels almost undefeatable.

It’s quite something; very positive. Turn as hard and fast as you like and the nose of the Focus clings to the steered line. Back off at the apex and the rear swings gently out before being arrested by the stability control. It’s an effect that is heightened as you progress through the drive modes. As standard, the ST comes with Slippery, Normal and Sport modes, and the tail is at its most mobile in Track, a mode that comes as part of the optional £250 Performance Pack. Also included in the pack are launch control, an upshift indicator and rev-matching for the six-speed manual gearbox. In Track mode, stability control is disarmed, hence its name.

That’s fine on the fairground-like looping crests and dips of Lommel, but how do these dynamic traits and the ST’s super-quick steering (just two turns lock-to-lock) make the ST feel on the road? The answer is that it feels just fine. In Normal mode it’s a perfectly habitable hatch with a supple ride and generally great refinement, though the front suspension sounds thumpy over abrupt impacts such as speed humps.

The roads in the Var and Alpes-Maritimes districts near Nice are fabulously twisty and challenging and also generally better surfaced than a typical British A- or B-road, so it feels better to tackle them in Sport. On one of the bumpier roads at Lommel, the contrast between Normal and Sport was instantly obvious, the ride going from comfortable to Arm and jiggly, like a Fiesta ST’s. Here, you only notice harshness when the road is visibly rough, and the upsides are worth having, not just the tauter ride that gives the Focus a more direct, responsive feel, but the crisper throttle response that really brings the car alive.

The 2.3-litre turbocharged four already has the edge over the Hyundai i30’s 2.0-litre, with stronger low- and mid-range push and a Sport mode that enhances initial throttle response, making for a very willing engine. Its turbo is a twin-scroll type with twin entries minimising exhaust pulse interference, and in Sport and Track modes it features anti-lag too – lift oft the throttle and the turbine path remains open for a few seconds to keep it spinning so that there’s less response lag when you get back on the throttle. This feature also allows ‘flat shifts’ by holding the throttle open between upshifts, though if you suspend mechanical sympathy you could do this yourself anyway, of course.

It all makes for a fast and keen hatch on these roads. The ST strings sequences of corners together with a calm precision, ride poised, the chassis well balanced and grippy. Indeed, even though I know there’s a lot more grip and cornering force available, only a couple of times during the day does the rear start to move round, and when it does it feels a bit odd, almost artificial. I suspect it makes more sense on a circuit when your demands are more binary.

The EcoBoost engine is a gem. It may not have the headline power output of some rivals, but as this drive shows, you spend a great deal more time using peak torque than you do at peak power, scoring a full set of upshift lights. Maybe it’s the extra capacity it has over 2-litre rivals. Maybe it’s the twin-scroll turbo or the anti-lag.

It’s probably a combination of all three that means there’s always a solid, potent response when you get on the throttle that hauls the Focus out of the turn. Superb traction helps, of course, though occasionally the front wheels tug and the nose shimmies as a reminder that, even with an electronic LSD, there are powerful forces testing the grip. All the while, the engine sound enhancement delivers a pretty authentic soundtrack, amplified in Sport and Track, that gives the engine a character that hints at homage to a classic twin-cam breathing through throttle bodies if not twin 40s.

To this appealing picture you can add decent Recaros that are improved over the Fiesta ST’s by being that bit wider, and brakes that started the day with a bit of a dead patch in the modulation zone but finish it with great pedal feel all through.

All four discs are bigger than on the previous ST – the fronts now 330mm instead of 320, and the rears 302mm, up by 31mm – and are served by an electronic brake booster that is said to keep the pedal consistent even at the onset of fade.

Downsides? Ford says it’s worked hard to eliminate sources of friction within the steering system, and it feels connected about the straight-ahead and when fully loaded, deep into a corner, but it lacks some feel and feedback in that area in-between. The gearshift is good but not as precise and tactile as the best and occasionally baulks on demanding downshifts, and the pedal spacing means I can’t heel-and-toe on downshifts. As mentioned, rev-matching that automatically does this for you, and does it well, comes as part of the Performance Pack. There is also no way to pick ‘n’ mix the settings from the different dynamic modes. Ford’s argument that most people don’t use custom settings is specious; keen drivers do, and on UK roads I can anticipate wanting Normal damping with Sport engine response and sound.

Although Track mode brings even firmer damping and steering, enhances the tail swing and stands down stability control, I drove for tens of miles in this feistiest mode on these French roads. It felt tough at times but was superbly controlled and at no point on the warm asphalt did the rear show any signs of getting loose, even though I was carrying more and more speed into the corners.

The front end soaked up the pressure, hung on and turned under power and the rear followed, and I got to wondering if the Focus has what it takes to challenge the seemingly unbeatable Honda Civic Type R around a circuit.

The ST costs slightly more than expected at a Aver less than £32k. Other ST models offered are a 187bhp EcoBlue diesel hatch (£29,495), which you can have with CCD and all four drive modes for an extra £800, and petrol and diesel estate versions (from £30,595) that can’t be had with CCD because they have a different rear suspension. There will be a seven-speed torque converter automatic option by the end of the year, too. Why not eight? The STs have so much torque that they don’t need them, says Ford.

The 316bhp Civic starts from £31,550 and the 242bhp Volkswagen Golf GTI Performance is almost £33k, but the 27lbhp Hyundai i30 N Performance, most similar to the Ford, is under £30k and comes with everything as standard apart from special paint. I reckon the Ford would be just as easy to live with and has a bit more character, dynamically and aurally, but it will take a group test on UK roads to determine where it sits in the fast hatch hierarchy. What’s not in doubt is that the Focus ST is back in the game.

+ A return to form and a genuine i30 N rival

– A Civic Type R is cheaper

Above: seats are by Recaro, and benefit from being a size bigger than those in the current Fiesta ST. Top: you’ll find little in the way of understeer to lean against here; instead the ST works front-end grip to the max.

Above: 18-inch alloys wrapped in bespoke Michelin Pilot Sport 4 S rubber are standard; 19s pictured here are an option. Top: steering is just two turns lock-to-lock; ST is manual only for now, but an auto alternative is imminent.