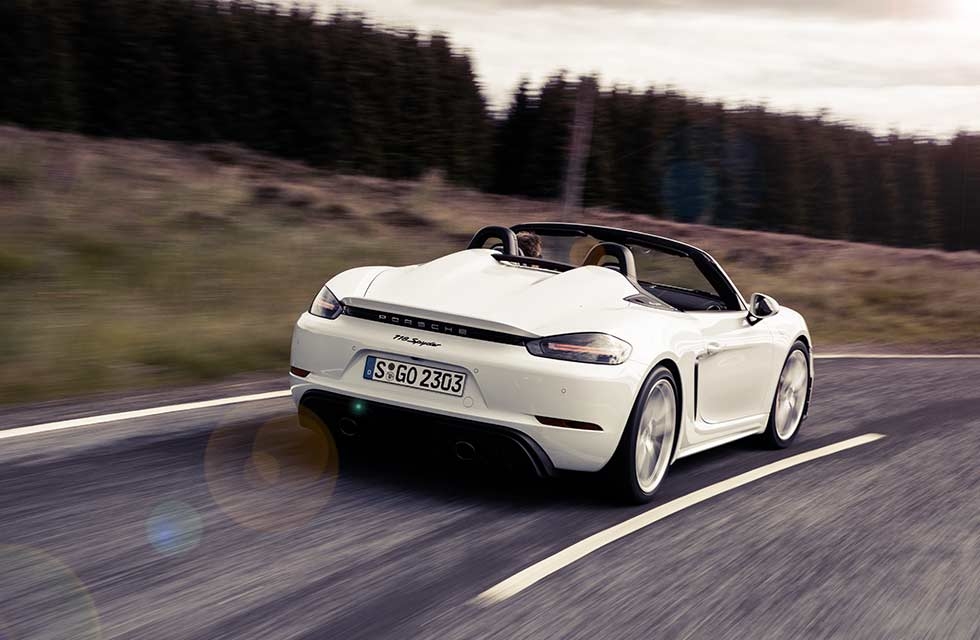 Now that the 2020 Porsche 718 Spyder 982 has been granted full membership to Porsche’s GT family, has it pipped its Cayman GT4 sibling in terms of appeal?

A compelling blend of presence, performance and mid-engined poise, the popularity of the 2020 Porsche 981 Cayman GT4 982, especially among enthusiasts with a back-to-basics (track-focused) mindset, meant the brand would inevitably repeat the exercise following the fourth-generation (718) launch in 2016. The main consideration, however, would be which drivetrain to install in the pinnacle derivative of a range otherwise allocated with turbocharged four-cylinder shove. As impressive a package as our reigning Performance Shootout champion, the 718 Cayman GTS, is, a blight in its comprehensive copy book is the stifled character and soundtrack of its force-fed flat-four engine.

Acknowledged by Porsche as a new entry point to the for mid-able GT family, the GT4 has been handed all the tools necessary to successfully full its mandate as a baby brother to the mighty GT3. While that car’s front suspension and complete braking system have been adopted by the new top-of- the-range Cayman, the GT4’s performance is derived from an all-new, naturally aspirated flat-six engine loosely based on the unit fitted to the rear of the current 992-generation 911. Mated exclusively with a six-speed manual transmission (with a PDK version a year away), this mid-mounted powerplant features piezo injection and delivers 309 kW and 420 N.m of torque (the maximum that the manual ‘box can handle) to the rear wheels via a mechanical limited-slip differential. More compelling than the fact this torque ‑ figure is available over a broader rev band (5,000 to 6,800rpm) than in the previous GT4 is that this drivetrain redlines at 8,000rpm.

I loved my allocated track time exploring the limits of that heady redline, as well as the handling prowess as a result of the GT4 982C offering 50% more downforce than its 981-generation predecessor.

However, I craved more time behind the wheel of the new 718 Spyder, an open-top tribute to the original 550 Spyder that, for the ­first time, is considered a full member of the GT family. While the Spyder makes do with a subtler, electrically operated wing where the Cayman’s adjustable item is mounted, the open-top sibling shares the same GT3-sourced architecture, the same drivetrain and an identical under- floor aerodynamics package.

The ­first Boxster to generate downforce on its rear axle, this impressive new aero package boasts a massive central chamber rising steeply from the mid-mounted engine bay towards the rear bumper. Straddled by a modi­fied exhaust system, this purposeful-looking diffuser works in tandem with a remodelled front fender incorporating an extended lip section, larger intakes and vertically mounted air vents which open to the front wheelarches.

Adopting an all-or-nothing approach to my time with the Spyder, it was with an apprehensive glance at heavy Highlands clouds that I manually stowed the roof below a turreted engine cover ahead of a 220 km scenic test drive. Like the recently launched 911 Speedster, this is a simple task, if not engineered to be completed in a hurry.

My eyes widened somewhat with the ­first blast on the throttle pedal as still-cold bespoke Michelin rubber and damp Scottish asphalt conspired to toss the car into the countryside.

Sited low within must-have optional sports seats, that early wake-up call served as the opening gambit to one of the most intense yet thrilling driving experiences I’ve had. Heightened by the crispness of the air rushing over the open cabin, the appeal of the 718 Spyder is boosted by an impressively well-balanced chassis and heightened performance which – just like with the other members of the GT family – calls for an altogether more measured approach to the getting-to-know-one-another phase of the relationship.

The reward for initial patience and a steady build-up of con­fidence was an increased sense of connection to the car, from its short-throw gearlever to its rather forgiving default stability control setup and inherent dynamic ability. Like the Cayman on track, you quickly learn how much throttle to attach to an impressively linear delivery of torque and, combined with a wonderfully precise steering setup and mighty braking system, you’re able to gradually increase the pace.

From the button-free simplicity of the standard (Alcantara-covered) steering wheel to the fact that there is only one driving mode, you quickly forget whether you optioned an audio system and desperately seek the next appropriate opportunity to listen to the chorus’ crescendo at that 8 000 r/min redline. This is one of few times I wouldn’t upgrade the exhaust system, such is the richness of the standard setup. Those with keen ears will also note a change in tone once this drivetrain deactivates a bank of cylinders to improve overall fuel consumption under light load.

Riding 30 mm lower than the 718 Boxster, on the Spyder the two-stage damper-control system is best left in its softest setting for anything away from a smooth racing circuit. Its default setup is ­ firm enough to be considered sporty while still managing most road imperfections.

Concentrating on each notchy shift, each small throttle adjustment, steering input and grip levels, all while enjoying fresh air rushing overhead, driving the new 718 Spyder was both exhilarating and exhausting; exactly how a car built for purists should be.

I think people are going to be surprised by how potent the range-topping Boxster is. While it’s to be expected the fastest Cayman to date would be impressive in exploiting the inherent levels of balance and composure of its mid-engined packaging, where the Spyder blasts the senses is just how much more aggressive, playful and pure it is compared with other members of the 718 family.

As focused as the modern automotive world is on developing new technologies aimed at ef­ficiency, convenience and autonomy, it’s refreshing that brands like Porsche – itself heavily invested in the future of mobility – remain committed to purity and old-school charm.

03 Snug optional bucket seats are a must have.

04 Woven door pulls in the name of weight saving. 05 Cayman GT4 laps the Nürburgring 12 seconds quicker than its predecessor.

06 Lettering can be customised.

04 Audio system and climate control can be deleted from spec.

–  likely to be superseded in sales by future PDK