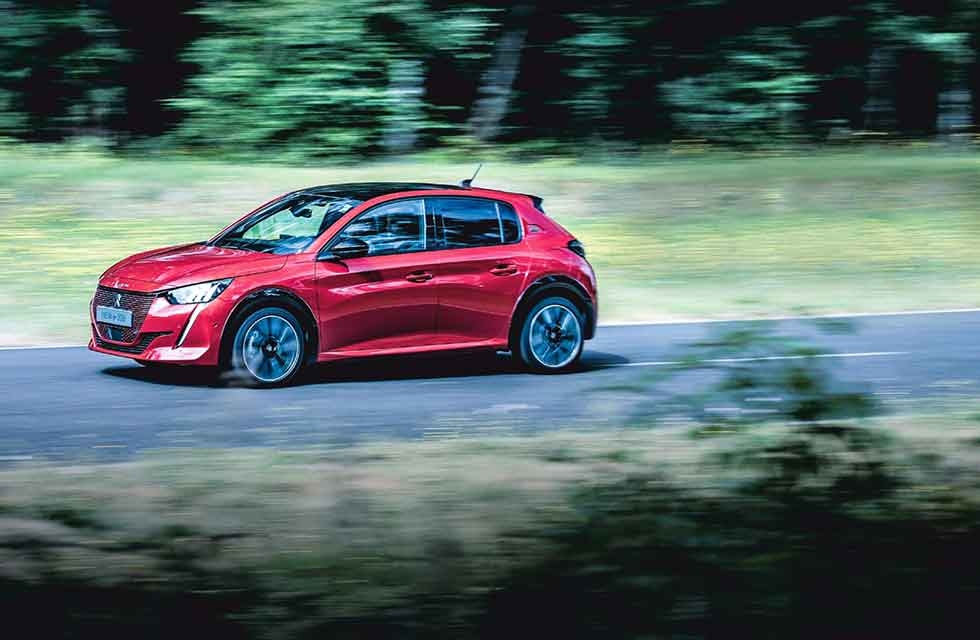 Electric cars are inherently stealthy, gliding quietly along in a bubble of zero-emissions driver satisfaction. Ironic then that most of the established manufacturers’ electric cars are given bespoke designs and branding to stick out like Gary Lineker’s ears: Zoe, Leaf, i-Pace, Ioniq, EQC. Except that’s not Peugeot’s approach.

Everything about 2020 Peugeot’s e-208 is deliberately normal. It’s called a 208 for starters, and the look evokes this magazine’s Car of the ’80s, the 205. Pure electric signifiers are few: an ‘e’ symbol on the side, a colour-shifting bonnet badge and body-coloured grille inserts, endowing the red test car with a mottled red-and-black mouth. It looks like you’ve run over Deadpool.

Thanks to a water-cooled 50kWh battery pack mounted below the floor, cockpit space and boot space (311 litres, more than a Fiesta, less than the new Clio) are – you’ve guessed it – identical to the petrol and diesel 208s. Spinning the front wheels is a 136bhp electric motor.

Step inside and the controls are also familiar. There’s a curved selector you pull back for reverse, neutral or e-drive, and pull again to alter the regenerative braking feel. The steering wheel’s the size of a cotton reel, but can obscure the fancy 3D instrument binnacle despite its tiny stature. You can overcome that by dropping the seat and wheel low. It’s a high-quality environment, with a gloss black centre console, wireless charging pad behind a flap that snaps shut with the crispness of a guardsman’s salute, and a carbon-effect layer that twists its way across the dashboard.

When you drive, this illusion of hatchback normality makes way for a completely ethereal experience (if you haven’t driven an electric car before). Press the throttle and the e-208 accelerates briskly for a compact hatchback, though glacially compared with the warp-speed thrust of a Tesla or Jaguar i-Pace. In Sport mode, the e-208 sails from standstill to 62mph in 8.1sec – that’s half a second quicker than the punchiest 130bhp petrol version. The motor’s operating window limits top speed to 93mph.

All the while there’s no combustion chatter, and on this smooth test track the tyre rumble is well suppressed. It’s a serene experience. There’s also plenty of grip in corners, but the steering feels a little too light and at times inconsistently weighted as you push through a turn.

And then there are the brakes, always a tricky element to integrate in an electric car, particularly the transition from regen to pad-on-disc friction.

The e-208 offers two levels of regen: imperceptible and barely perceptible. Lift off the accelerator and the Peugeot gently slows, as if coasting in a combustion car. In the more assertive setting, deceleration is slightly more pronounced. It’s a contrast to the one-pedal action of the Nissan Leaf, which can feel like smashing into a brick wall when you lift-off. The e-208’s brake pedal feels pretty baggy and buzzy too; clearly an area for fine-tuning.

Energy regeneration is crucial to the battery range, which has been homologated at 211 miles (WLTP). Charging on a single-phase AC wallbox takes 7.5 hours, but the e-208 can handle 100kW DC rapid charging, which loads six miles into the pack every minute.

Peugeot will back its battery pack with an eight-year, 100,000-mile warranty, and certify its capacity when you come to sell your used EV. It’s all part of a broad range of services provided via an app that helps you remotely control charging, pre-heat the car or check its range.

Such features are a normal part of the electric driver’s life. And the e-208 is a conspicuously normal supermini. It doesn’t stand out like the Honda E, or wear its volts on its sleeve like the yellow-accented Mini Electric, which will cost broadly the same as the circa-£28,000 Peugeot (before £3500 EV subsidy). Those cars may find themselves stuck within the city limits, due to their puny, sub-150-mile ranges. The e-208 should feel equally at home in the city, with its compact package, peppy take-off and zero-emissions capability. But with its comfy, civilised air at motorway speeds and 200-odd miles of range, it won’t be stuck there. Just like a normal car.

Aren’t EVs a bit dull to drive? THE BIG QUESTIONS

Instant torque, and lots of it. Phenomenal braking. Low centre of gravity. This does not sound like a recipe for a dull car. And yet, despite the glowing promise of 2000bhp from the new all-electric Lotus Evija, and the extraordinary performance of the VW ID R on record-braking runs around the Nürburgring and up Pikes Peak, there is a suspicion that EVs are short on the sort of excitement that usually fires up car enthusiasts.

For an expert perspective we turned to Katherine Legge, a British racing driver based in the USA, who has raced in everything from DTM to NASCAR, and is currently focused on racing a Honda NSX hybrid in the IMSA sports car series. Along the way she’s also raced more electric cars than most, including Formula E and the i-Pace eTrophy (pictured below), and driven hybrids and EVs on the street.

‘You take away one of your senses with electric cars, in that you don’t have any noise prompting your gearchanges,’ she says.

‘The weight distribution is also different, especially in the i-Pace – it’s two tonnes, so you have that to think about when you’re braking or cornering. But the i-Pace is fun to hustle, and the brakes are phenomenal.

‘And with EV’s it’s 100 per cent torque straight away. So throttle modulation is a factor; how good you are with your right foot, and how good the manufacturer is at delivering you that pedal-to-power curve.

‘In a Tesla or i-Pace, any high-end electric car, you put your foot on the gas and you’re pinned to your seat. You’re like, “Holy moly!” That’s a whole new experience that you just don’t get in a normal car unless it has 1000bhp.’