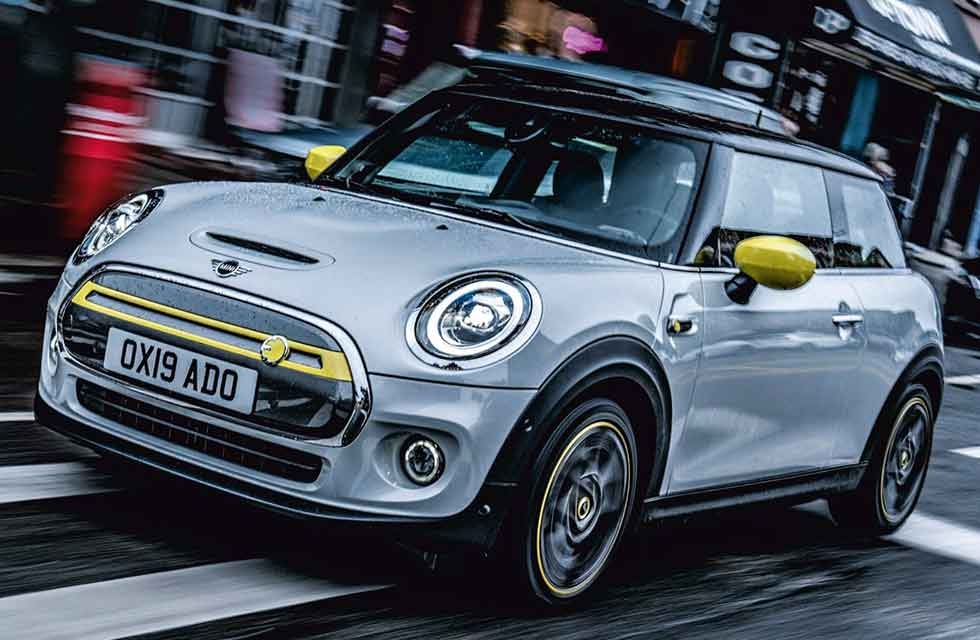 New Yorkers love the Mini Electric. Correction. The few who notice it love it. Except when I honk at them, and then they hate it. I have to honk because they’re so absorbed by their phones that they don’t see me coming. And they can’t hear the low-speed warning chirp that it emits, because they’re wearing earphones. So pedestrians and cyclists take a bit of prompting before they’ll admit to admiring the new EV, on sale early next year.

But it’s a different story at the traffic lights, where not only most cars but also some motorcycles are beaten away by the rapidity of the Mini’s initial acceleration. It may not have headline-grabbing figures like the Lotus Evija’s 2000bhp, but it’s very quick – as quick as a BMW M4 F82 to 37.5mph. The more usual acceleration benchmark, zero to 62mph, takes a less dramatic 7.3 seconds. Top speed is restricted to 93mph.

This is not, strictly speaking, the first electric Mini. There was a prototype that was put into limited production a decade ago, designed to garner feedback that would help BMW create this serious attempt at a mainstream EV. Like the Mini E, the Mini Electric is adapted from the regular Mini, rather than designed from the ground up as an EV. That involves compromises, but also means it looks like the universally popular Mini. If, that is, you’re looking.

The 32.6kWh battery pack is in a T-shape between the front seats and under the rear seats, giving a peak of 181bhp and 199lb ft of torque. Range, according to the WLTP test protocols, is 124-144 miles. Not great, but fine if you’re sticking to the city. And that’s why the Mini Electric uses the regular three-door hatchback body, whereas a hybrid powertrain is the form of electrification offered in the bigger Countryman, the very name of which says it shouldn’t be confined to within 144 miles of a charging point. The strategy should become clearer when the radically downsized MiniMini, developed and built in conjunction with China’s Great Wall Motors, enters the fray in about 2022.

The electric motor – derived from the BMW i3’s – sits under the bonnet and drives the front wheels, and the more compact battery doesn’t intrude on rear passenger or luggage space, unlike the Mini E, so it’s a proper four-seater with a 211-litre boot, or 731 litres with the rear seatbacks folded. The Mini Electric is, however, about 145kg heavier than a comparable petrol version, due to the weight of the battery pack and the underbody metal reinforcement required to protect it. And the inherited structure means it doesn’t have the extra-tight turning circle many EVs enjoy, thanks to their made-to-measure narrow front chassis rails.

The upside is that the Mini Electric’s centre of gravity is about 3cm lower than the petrol car’s, and the front-rear weight distribution improved.

And it shares with the new BMW 1-series F40 super-fast stability and traction control electronics that work brilliantly at turning that instant torque into usable performance, not wheelspin and torque steer. Although insiders claim bigger batteries are not a priority, fitting the more potent 50kWh energy pack would be easy, and it would surely sell well.

At a glance, the Electric remains pure Mini. But then you notice that the front grille is a blank; there’s no engine demanding cooling air, and it improves aerodynamics. The wheel design is also aero-focused. There’s no exhaust pipe. There are new LED lights. The fuel filler cap is replaced by a charging socket. If you need to use a public charger, it will take about five cheeseburgers and two donuts to while away the two-and-a-half-hour nozzle feed required to restore 80 per cent of the maximum energy on a bog-standard 11kW charger. Find a 50kW plug-in opportunity, and the same task can be completed in just 35 minutes.

Inside, the key addition to the cockpit is an oval 5.5-inch display that straddles the steering column. It incorporates the speedometer in digital and pseudo-analogue forms, and other driver-focused data. It does a good job of keeping you informed about the state of charge, your range and your nearby charging options. Real-time traffic information is standard. When you’re parked and hooked up to a charger, the monitor automatically relays the remaining charge time. Green spells full, red indicates that something has gone wrong. And towards the end of your charging session, the cabin temperature can be preset remotely just in time to optimise the in-car environment for the next journey.

Clever, but the important stuff is how it drives. Curving over the hills towards the makeshift waterfront racetrack created for New York’s Formula E round, a carefully chosen selection of side streets, thoroughfares and freeways offers ample opportunity to test the four drive modes. With the temperature gauge reading 32ºC, Green+ mode is no-go because it cuts back or even deactivates the air-con in exchange for a handful of extra miles. Green mode is programmed for enhanced efficiency via a more sedate throttle response, heavier pedal action and a less aggressive rpm delivery. Mid is a good compromise. In Sport mode our consumption soars from 15 to over 25 kWh, but you get plenty of old-school driving pleasure in exchange. In addition to the faster steering and the quicker throttle response, it’s the awesome midrange acceleration that makes the Mini Electric stand out even in this speed-restricted metropolitan environment.

The two-stage battery regen set-up is an acquired taste. It gives the choice of ‘one-pedal’ driving: take your foot off the ‘gas’ and the car slows instantly, while giving the battery a hefty boost; you only need use the brake pedal if the unexpected happens. The problem is that it’s hard to gauge with any precision, so you’re forever reapplying the throttle, making for unhappily jerky progress. It’s ergonomically unfortunate that the regen toggle sits right next to the start-stop button; you really should be able to operate it without looking (like the paddles on Merc’s EQC). The regen options can be deployed independently of the main driving modes.

The Mini Electric hits the streets next March, with a choice of three trim levels. Entry price is £24,400 (once the government grant has been factored in), or add £2000 to get upgrades including heated seats and a reversing camera. The top-spec £30,400 top spec for Harman Kardon audio, head-up display, panoramic sunroof and matrix LED headlights. What you don’t get on any version is autonomous driving capability, or a trick parking aid, or a boost button. Maybe that’s the right approach, and there’s no need to load it up with extra tech. Judging from the reaction in New York, this combination of style, affordability and clean running could make the Mini Electric exactly what the world needs right now.

Is an EV really cheaper to run?

Let’s be clear: five years from now, the cost of buying and running an electric vehicle will be the same as for a comparable petrol or diesel car. Simple. Right now, the picture is less clear. Whether an EV will save you money depends on many variables, including where you live, where you work and how many miles you do.

SO HOW DO I WORK IT OUT?

The government-backed Go Ultra Low site shows some convincing figures. On road tax and fuel costs it spells out the massive benefits of plumping for a Nissan Leaf over a Nissan Juke, for example. But it’s mute on resale values, servicing costs (about 25 per cent cheaper, reckons Renault) or insurance (typically more, in line with higher purchase prices). If your petrol will cost you something like 12p a mile, electricity will cost you a quarter of that. Your annual road tax will be zero as a private driver (business EV drivers pay, but less than normal), although EVs over £40,000 get hit for £320 a year for the first five years. Depreciation used to be a worry for EV owners, with the double anxiety that their car might be completely overtaken by new technology before they can sell it, and their battery might melt. The trade now says there’s growing demand for used EVs, and manufacturers are offering assurances on batteries (seven years on the ID3). The Congestion Charge is the clincher for many. London’s EV exemption will end in December 2025, but until then you get to drive your e-Tron around Hyde Park Corner free of charge.

WHAT ABOUT MAKING THE SWITCH?

Some manufacturers go out of their way to ease the transition; Renault, for instance, installs a wallbox for Zoe customers. Merc has an app called EQ Ready that tells you in some detail whether the journey you’ve just done would have been possible in an EQC without stopping to charge.

Electricity is cheaper than petrol; other costs can be trickier to calculate

‘We do mufflers’? Not for much longer, mate Heavier, but better weight distribution helps handling