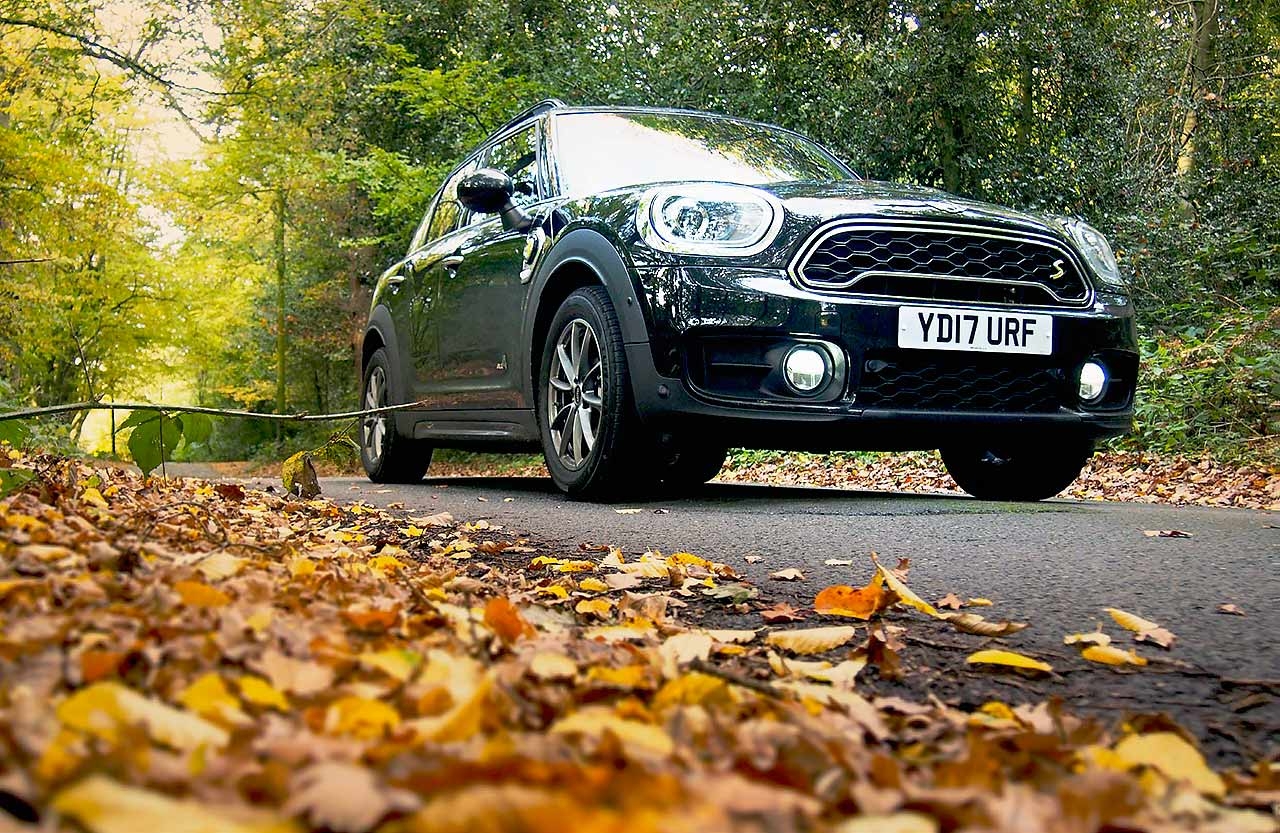 Main driven Mini’s first PHEV. In its element, with all-wheel drive on demand, the Countryman feels at home when out on country roads. Review: mini countryman PHEV. We find out what MINI’s first plug-in hybrid is all about. Photos: Paul Mihotosn. Words: Jonathan Musk.

It isn’t without irony that MINI was the first brand within the the BMW Group to have a proper go at a real-world electric vehicle, with the MINI E trials taking place across three continents in six countries between 2009-2010. Yet, following the MINI E’s success, BMW took over the reins and ultimately we ended up with the BMW i3 electric supermini. No bad thing, but no electric MINI.

We’ve had to wait until 2017 for a MINI equipped with a plug that you can actually go out and buy, but this time the technology under the bonnet has come from its big Bavarian brother.

The Countryman is Mini’s first plug-in hybrid and uses the same drivetrain that can be found in the BMW 225xe. This means it benefits from the same perky three-cylinder petrol engine that powers the BMW i8 (albeit detuned) and has an independently propelled electric rear axle. Therefore, three behavioural modes lie at the heart of the Countryman: Rear- , front- and all-wheel drive. Fortunately, the car isn’t anything like driving an i8 in reverse, fun as that might be, and instead the Mini displays a particularly sharp driving style.

Only a few yellow badges hint at this car being anything other than a ‘normal’ model. Subtlety, as with most of BMW’s iPerformance range (not BMW i), is the name of the game here, which is slightly at odds with MINI’s typical tendency to overdo things with a mix of Union flag designs used to enhance the ‘British product’ feel.

With what seems like a dozen initials in its name, I get the feeling MINI weren’t all too sure what they should call this car and that’s possibly to do with the fact it’s pretty good at most things. “MINI Cooper S E ALL4 PHEV Countryman” can be broken down into ‘Cooper S’ performance, ‘E’conomical, ‘ALL4’-wheel drive and plug-in hybrid. Oh and it’s a Countryman too, by the way. But that’s not a criticism. The MINI is highly capable. The electric range (although too short) offers an enticingly fun experience and the car is especially quick when combined with the petrol engine. It feels firmly planted to the road, with the six-speed automatic gearbox always feeling like it’s in the right gear (unlike many 8 or 9 speed boxes). So it ticks most of the driving boxes off the bat.

The engine is a real gem of a thing – it’s triple cylinder roar can fool you into thinking that it’s something much larger than a mere 1.5-litre, while its performance more than matches the soundtrack, especially with added electric oomph. Paddle shifters on the steering column can be used to insert your own sporty control too, should you so desire. The three driving modes are effectively electric, hybrid and combined, which incrementally add power but decrease economy. In electric mode, the car is at its best – silent, nippy and frugal, while hybrid-drive makes up the majority of anything further than ten miles. Combining both motors turns the car into a hot-hatch beater, but consequently sees the economy take a dive. Over the course of a week and some 500 miles driven over a variety of short journeys on electric and a few motorway jaunts on petrol, the MINI averaged mid-to-high 40’s. That’s not too bad, but it certainly could have been improved with even just a slightly larger battery. I’ve also a suspicion that the electric motor is possibly too powerful, encouraging speedier driving than is really necessary in a mode that’s best suited to urban and therefore slow-speed driving.

There are some things the MINI isn’t good at. The aforementioned electric range is definitely on the low side; despite MINI’s NEDC claim of 26-miles, it’s more like 12-14, if you’re gentle. That’s in part due to the meagre 7.6kWh Li-ion battery, although the flip side is a smallish battery means it is quicker to charge (2.15hrs @ 3.6kW) and offers more interior occupant space and less of a weight-burden to lug about once depleted.

The latter is certainly a plus point, as the Countryman – despite a relatively high driving position – has pinsharp handling and all of the go-kart character MINI’s are famous for. Unfortunately, this has required the engineers to set the suspension to full bone-shatter mode. It won’t put off front-seat passengers, but passengers in the rear may end their journey slightly more shaken than when setting off.

Although I suspect MINI wish for its competitors to be compact SUVs like the Toyota Rav4 Hybrid, in reality it is more likely to be found in the same shopping basket as the Volkswagen Golf GTE, Audi A3 e-tron or even its sibling the BMW 225xe. An SUV, it is not, even if MINI calls it that: Its looks are more a result of bulky styling and long springs, as the Countryman is still a reasonably small hatchback with other compact SUVs visibly taller on the road. As an aside, the 2017 Countryman is in fact larger in every dimension than its 2016 (non-plug-in) predecessor, but it’s still small.

The plug-in hybrid benefits from a near-top spec trim level, with niceties like an 8.8-inch touchscreen included, unlike for the non-plug-in Countryman. Other standard kit includes Bluetooth connectivity, USB audio and charging, sat nav and DAB radio. Additionally, the PHEV is equipped with a comprehensive on-board computer displaying all sorts of efficiency information at the touch of a button or screen. The central display is surrounded by a yellow arc that indicates remaining battery charge too.

Inside, the Countryman immediately struck me as being well-built, but an annoying rattle was to be heard from a loose piece of trim around the rear view mirror (which I only found after hours of hunting). The rear seats can be split in three, making a practical and flexible load space solution. The boot is reasonable considering the car’s overall size, and a handy additional stowage area can be found underneath its floor. However, this is filled with cables so isn’t likely to be useful for carrying eggs from the supermarket. Overall, my impression was that the interior was fussy, but once absorbed everything fell to hand and made sense. It’s a complex and often illogical design, but ultimately quite endearing.

In 2019, MINI has confirmed its first battery electric car will be based on the three-door hatch, which in some ways is a bit of a surprise considering the market trend to churn out as many ‘desirable’ compact SUVs as is humanely possible. The PHEV Countryman, however, offers a glimpse at what that car might be like but is more importantly a car you can go and buy today. It might offer the stars and only reach the moon, but that’s still pretty impressive in my book.

One in ten Countryman sold around the world are the plug-in hybrid model, showing that the market is certainly ready to accept a premium priced plug-in MINI. It’s MINI’s statement of intent and fortunately, it succeeds in delivering the goods.

LEFT & RIGHT Practical compact SUV styling is more like an estate than an SUV, which is a good thing.

CLOCKWISE FROM TOP LEFT Boot loses some space to battery, but not so much as you’ll notice. Charge flap hidden on left side. Rear legroom could be better, but is comfortable. Toggle switches are neat.