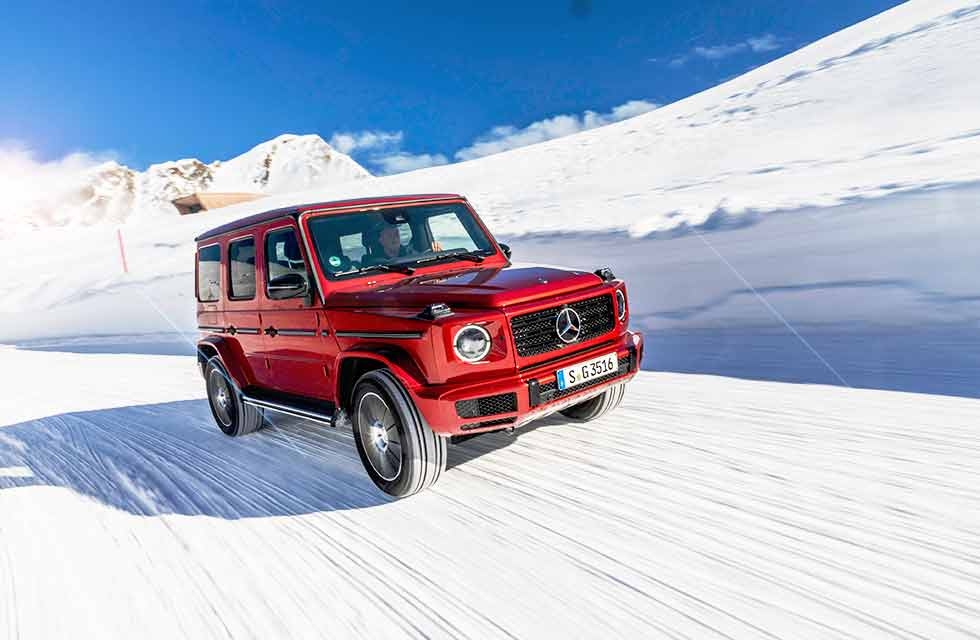 Lock, stock and one smoking barrel The outrageous new G-Class, toned down a bit. By Keith Jones.

Like feasting on a multicourse banquet, but insisting on washing it down with low-calorie Coke, the G350d is the slightly less extravagant version of a very extravagant car. In-between versions are available in other countries, but the UK line-up for the new Mercedes-Benz G-Class W463 consists of the G63 AMG (as Giant Tested this month) and this relatively humble diesel. Relatively. That’s 577bhp vs 282bhp, 627lb ft vs 443lb ft and £143k vs £94k. Not exactly poverty-spec.

Certainly, the prospect of replenishing the G350d’s fuel reserves less often than you’d have to with its V8 sibling has its appeal, but given the G-Class has similar aerodynamic properties to Buckingham Palace, you’ll be fortunate to best 25mpg in the 350d. Ouch.

It’ll still out-drag many nimbler-looking cars, darting to 62mph from standstill in 7.4sec, although its top speed’s blunted at 123mph. Not as thrust-into-your-seat quick as the G63, but respectably and enjoyably quick. Don’t be fooled by the 350 badge’s sleight of hand: engine downsizing hasn’t escaped the G-Class. Nestling under that evocative trapezoidal clamshell bonnet whirrs Mercedes’ new 2.9-litre straight-six mill, producing 40bhp more than the G350d’s predecessor could muster. Of greater consequence is the heap of torque available from little more than idle.

Of primary importance – even for an SUV as dirt-capable as the G-Class – is how effortless and quiet a cruiser the G350d is. At motorway speeds there’s more din from wind rushing around the A-pillars and from the knobbly tyres than from under the bonnet.

When you do venture away from the blacktop, the ease with which the torque’s metered out is especially welcome, although you have the security of 4Matic all-wheel drive and myriad electronic systems to aid your progress. The all-new ladder-frame chassis is longer and wider, and the difference between old and new G-Class is extraordinary.

From the driver’s seat it’s a curious mix of old and new: glossy flat-glass dashboard screens meet a glossy flatglass windscreen. But it’s not the most space-efficient of SUVs, with those in the back ill-served considering the size of the car.

On the road, in some ways the G350d feels like a diesel-engined GLE or GLS: safe, predictable and comfy, something you wouldn’t think twice about using as a daily driver. Its steering in particular is leagues ahead of any previous G.

The strength in depth of Merc’s 4×4 range means you have plenty of choice if function is your priority, generally at a lower price than this. But if you want a G-Class, it’s surely better to go the whole hog and get the full-on G63.

VERDICT Eminently charming, but not inexpensive enough to render the V8 superfluous