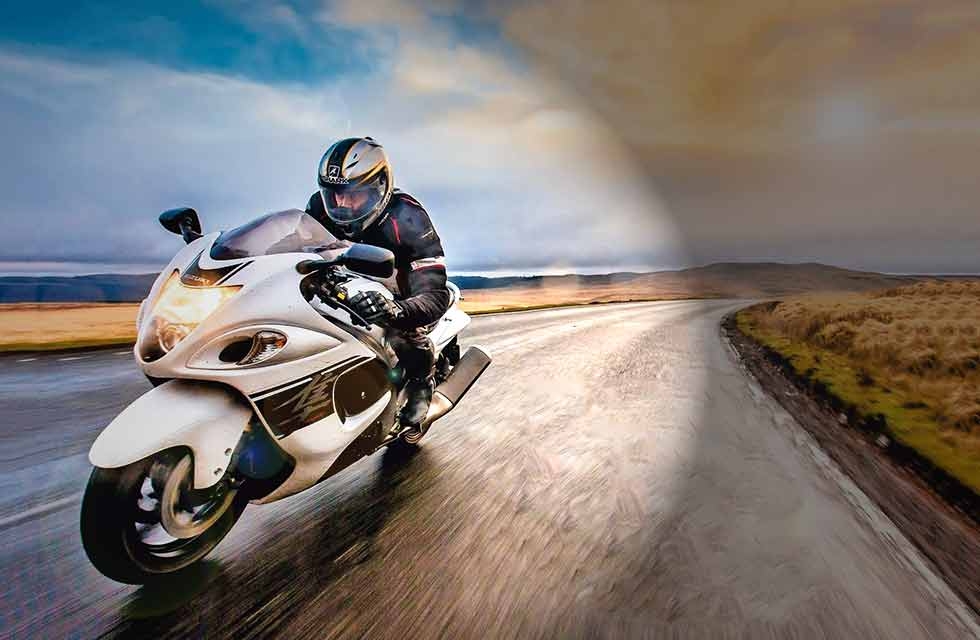 This year is the Suzuki Hayabusa’s 20th anniversary… just in time to be discontinued. RiDE goes for a final high-speed hurrah in SouthWales on the quintessential hypersports tourer. Words Simon Hargreaves. Pictures Jason Critchell.

Thick, oily cloud clings to the Brecon Beacons like a mouldy cloak. The cheerless grey mizzle could persuade a rider to hole-up in a roadside café and wait for summer. But cheer up mate! The pearl-white Suzuki Hayabusa crouches down into the granular tarmac like a ground-hugging streamliner, its snouty bullet-train form so low-level it’s as if I’m cocooned, protected from the elements by sheer velocity. The purring surfeit of performance — 180bhp at the back wheel, as subtle as a lead clog – is almost entirely untapped, yet still propels us with smooth, astonishing speed on tickover alone.

It might be extinct but a GSX1300R is still awesome, whatever the weather. The Busa’s propensity for pace is why we’re in South Wales, to acknowledge 20 years of hypersports touring and visit the place it’s still setting speed records. Pendine Sands, south of Carmarthen, is a seven-mile coastal strip steeped in world-record legend; a Welsh Bonneville Flats where, in 2018, a supercharged Busa topped 200mph. It’s fitting to come here on the last Busa for a final blurring of reality. And an excuse to take the scenic route one more time…

I’ve spent time behind bars on a Busa (handlebars, but so easily could’ve been jail). I had a first-generation bike in late 1999, a year before the informal 186mph production-bike top-speed limit — it made 165bhp and the speedo went to 220mph. The needle did too, even if actual flat stick was just shy of double top. Rode it to the south of France; the one-hit blast back from deep Provence was an overnight, speed-stained blur of lunacy. In 2008 I went to the launch of the second-generation Hayabusa at crazy-fast Salzburgring in Austria, then rode one to the even-faster B500 in Germany. In the last 20 years I’ve ridden Busas tens of thousands of miles, from Cornwall to the Côte d’Azur. Christ, I wish I could have bottled it. Often did, now I come to think of it.

But a few days ago, as I kitted the Busa up for its mid-winter Welsh sojourn, I was surprised to discover it’s become such an anachronism. I looked for a 12v socket. There isn’t one, so I wired the sat nav and heated jacket direct to the battery. Later, as we prowled onto the motorway, I noticed the air temperature had dropped and looked for a temperature gauge. There isn’t one. My hands got cold, so I looked for a heated grip switch. There isn’t one. I watched the fuel gauge creep south and wondered how many miles were in the tank. There’s no miles-to-empty range. As we hit traffic and speed dropped to 60mph, my wrists ached from an impractical sportsbike riding position borrowed from a 1990 GSX-R1100, with low seat, high pegs and bars an arm-stretch away. I looked for a cruise control button. There isn’t one. As I punted the 1340cc inline four away from traffic lights, my left foot instinctively went to short-shift as I held the throttle open… and there’s no quickshifter. No traction control either — its absence reins in some throttle-jockey exuberance, but I can’t pretend I need it. The tri-mode power switch, limiting power by 20% and 40% — is truly redundant. At its launch in 2008, I remember being stumped as to how the Busa could be improved. Ten years later, I have the answer.

But I’m not complaining. Right now the GSX1300R is arcing through the valleys like a burning pulse of light, sci-fi sizzling across the swoops and whoops of the B4560 with an implacable, reassuring, sure-footed calm, like it knows what it’s doing even if I don’t. The Busa might be famous for tyre-torturing grunt and motorway-mangling top end but in the slippery cold of a wet weekend in Wales, there’s so much more to a Busa than mere bucketfuls of speed. It ought also to be celebrated for its agility, ride quality and handling chops — though less so for its dodgy brakes; the radial Brembos lack bite and clarity. They have power but you have to squeeze hard to get at it.

As the sky clears at Talybont-on-Usk, we turn left off the B4558 towards the reservoir, then slither up the steep hairpins back towards Merthyr. I remember how you’re supposed to do old-school hypersports touring: you can’t jump on a Hayabusa and expect it to wipe your bum — it’s engineered to have the opposite effect. It won’t whisk you off in a brainless, post-Christmas, over-indulgent haze of Quality Street and turkey. You have to earn your riding pleasure, old-school style.

There’s a lot of old-school in the Busa. Its design comes from a time when aluminium frames were made with aesthetically pleasing beams of extruded metal welded neatly to cast sections, not ugly, vacuum-packed castings wrapped around a motor. It looks substantial and beefy. And the fairing is a vast, enveloping swathe of plastic held together with poppers and bolts, not flimsy, clip-together panels. The Suzuki’s analogue clocks loom from the dash like a pair of boggly eyes, crammed with numerals and cheesy idiot lights. It might be old fashioned, but it looks durable; like it means it.

At Merthyr we skate north again, back into the now-drying hills, up the A470. Ours is a helter-skelter route, doubling back and forth for the hell of it, but the road is pure Busa territory — intense, indomitable, indefatigable, pounding out an A-road rhythm across windswept moorland hillsides with bloody-minded endurance. The retro riding position makes more sense at speed, wind-blast off the low screen relieving wrist pressure. We double back at the A4059, south again towards Penderyn, then jump on the A465 and A4221 to pick up the A4067, A40 to Llandovery, then back again on the famous A4069 Black Mountain road. The Busa’s focus is exhilarating. The motor’s a dirty beast; you can tell it’s not Euro5-compliant because the throttle is snatch-free and its power delivery hasn’t got the hollow, rough, thin-skinned thirst for fuel of tightly-controlled modern engines. It feels generous with its unleaded, throwing it into the motor on demand. Maybe that’s why the 21-litre tank empties so quickly. Or at least says it does – the light comes on at 150 miles but it’s averaging 46.5mpg and it takes only 15 litres to fill – which means it should do over 200 miles.

‘Imagine the sound of a supercharged Hayabusa at an unimaginable 200mph’

Away from the hills, we pick up the A48 and mainline towards Pendine, then get lost and end up on a back road behind a pair of muck-spreaders. Arriving at Pendine Sands, closed for the off-season with not even a café open for business, I roll the Suzuki down the concrete slipway ramp and onto the beach. I can’t — and don’t want to — ride the bike on the beach; the tide’s in and it looks like the last surface on which to ride flat out. But it’s impossible not to appreciate the history and romance of the place; imagine the sound of Malcolm Campbell’s 22.3-litre W12 Blue Bird as it screams across the sand at 175mph in 1927 or Pendine’s top-speed record holder, Zef Eisenberg, who took his supercharged Hayabusa over an unimaginable 200mph in May 2018. It’s a testament to the abilities of the Hayabusa that it was even possible.

Launched in 1999, the Hayabusa was Suzuki’s Honda Blackbird-eating top-speed sports tourer (literally; a Hayabusa is a Japanese falcon that preys on blackbirds). With obvious nods to GSX-R technology, the 1299cc, 150bhp (measured) inline four and beam frame were all-new. The second-generation Hayabusa is powered by a 1340cc, 180bhp (measured) inline four, with a long bore/stroke ratio giving it huge low-down grunt and midrange — at 5500rpm it’s making 100bhp and 180bhp at less than 10,000rpm. That’s a very condensed power-band and makes for an incredibly flexible motor. The second-gen’s chassis maintains the same geometry and frame as the original bike but gets a beefier swingarm, new brakes (four-pot radial Brembos instead of six-pot Tokicos or, later, 4-pot radial Tokicos), revised suspension and a restyle.

The Brecon Beacons, easily accessed from the M5/ M50, is a great place to ride a bike whatever type it is — there’s something for tourers, adventure bikes, sportsbikes or middleweights. The Beacons are criss-crossed with a network of tarmac; some roads are better than others. This route zig-zags through the hills, with twisty A and Bs (B4560, A4069), scenic undesignated roads (Talybont reservoir) and fast As (A470, A4509). The Beacons are popular with tourists and get busy, like all National Parks, during holidays. Our route then takes us to Pendine Sands along the A40, with an unplanned diversion at the end via the A477 and Summerhill. After Pendine, we burned extra fuel with a loop up to Newcastle Emlyn (B4299), then back down again to Carmarthen (A484).

As the sun sets over Pendine, it sets over the Hayabusa too — now out of production, with no new bikes in showrooms. It’s a real shame. It’s Suzuki, not the upcoming Euro5 emissions regs, that killed the Busa — the factory could adapt the engine to comply if it wanted to (after all, Kawasaki managed it with the ZZR1400). So Suzuki chose not to update the Busa — and with unsubstantiated rumours of a replacement not appearing until 2021, if at all (which is more likely), don’t hold your breath.

Instead, go and find a good secondhand one.

You get no modern gimmicks or gizmos: instead there’s 180bhp of romping, streamlined power. A crude missile. But effective.

Original top-speed hypersports tourer with a 173bhp 1299cc inline four (tested 150bhp at the rear wheel). Was the only bike to hit 194mph prior to top-speed limits introduced in 2000.

Suzuki introduced a top-speed limiter, which cut ignition above 300kph (186mph), though measured power remained the same. Subframe swapped from aluminium to stronger steel in 2001. Minor ECU upgrades in 2003.

Overhauled model with 1340cc engine, uprated chassis, new styling and numerous cosmetic and practical upgrades. Claimed power up to 197bhp (180bhp at the wheel) but speed still limited to 186mph.

As per previous model but with addition of Brembo (instead of Tokico) front brake calipers, plus Suzuki’s first ABS system on a sportsbike.