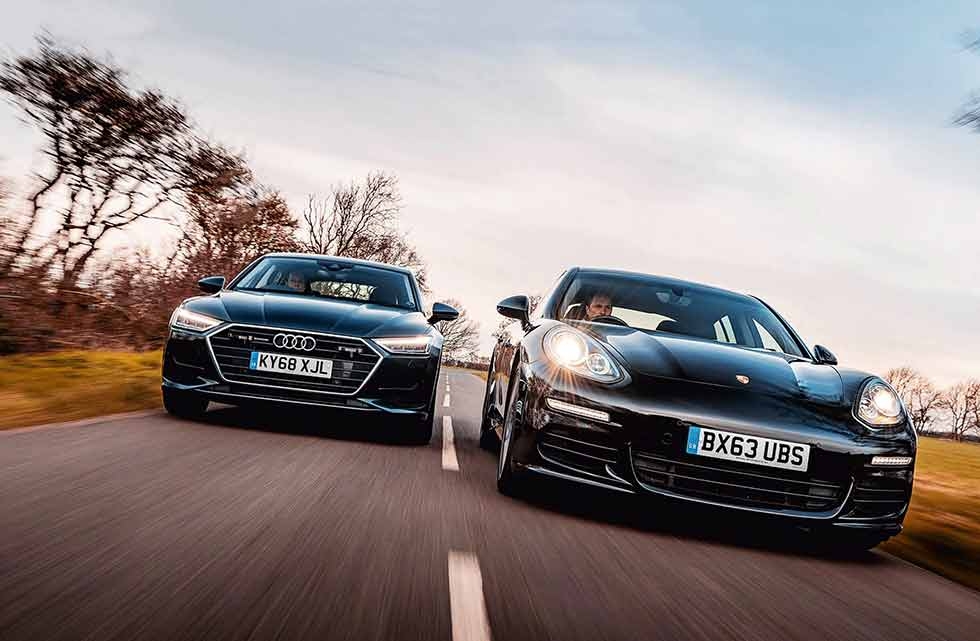 Icon Buyer Used Porsche Panamera or new Audi A7? Take the smooth with the smooth £50k gets you a sleek new Audi, but for less than that you could get a low-mileage used Porsche. You coupes your money, you takes your choice… Words Ben Barry. Photography Alex Tapley.

The Audi A7 Sportback is an A6 saloon in a smarter five-door coupe body. In the vast VW Group product masterplan, it’s positioned above the dowdier A6, but below the Porsche Panamera, which does a similar job – A7 prices span £47k to £57k, where the latest Panamera won’t get out of bed for less than £68k. Go secondhand, however, and the maths equalise, and in some cases tip very favourably towards the car from Stuttgart. We’ve brought both together to see which is best.

The Audi’s price range and powertrains narrow our used buying focus to facelifted first-generation Panameras from late 2013 to 2016, with hybrids and diesels most comparable to the A7’s currently diesel-only line-up, though pokey petrols are coming.

Porsche has now discontinued diesels, but used supply is plentiful, and first-gen facelifts make a healthy 295bhp with 44mpg. They start from under £30k with fewer than 50,000 miles. Stretch beyond £40k and you’ll unlock warrantied 15/16-plate models from main dealers with as little as 20,000 miles on the clock. Right now, dealers probably want them off their forecourts as swiftly as possible.

Porsche launched a hybrid Panamera earlier, but it saved the plug-in model for the 2013 facelift. Known as the S E-Hybrid, it upgraded to a lithium-ion battery with up to five times more juice than the old nickel-metal hydride lump. Add in a supercharged 3.0-litre V6 petrol engine with 329bhp and 324lb ft torque, plus a 94bhp/229lb ft electric motor and there’s plenty for the rear wheels to deal with. It was a useful warm-up for Porsche before its petrol-electric hybrid 918 won Le Mans three times on the bounce from 2015.

Very early S E-Hybrids with 70,000-100,000 miles are available from £30,000, while new A7 Sportback money typically buys 10,000-40,000-mile examples on 64-66 plates with a couple of years’ main-dealer warranty still to run. Road tax is free, as is entry to London’s Congestion Charge zone thanks to its 71g/km CO2 output. The plug-in takes around four hours to charge from zero on a domestic socket.

Despite Porsche’s claims of 23 miles of e-motoring and speeds up to 84mph, owner Simon Page reveals he typically covers 16 miles in e-mode in summer, falling to around nine in winter. Much of his 10-mile round-trip commute can be driven without petrol, but even so his trip-computer average is around 36mpg, way short of Porsche’s official 91mpg.

I jump in the A7 first, and it quickly impresses. It has a stately presence and the reassuring thunk of good build quality, and high-tech touchscreen infotainment that puts too many essential functions too far down in the centre console.

We’re driving the 50 TDI in entry-level Sport trim, which decodes as a 3.0-litre 282bhp TDI with quattro, adaptive dampers and coil springs, and an eight-speed auto. It costs £54k. A 50 TDI does wafting very well – even a librarian might comment on the hush. The ride is nicely cushioned, and it deploys an ample 457lb ft torque fuss-free from junctions then surges for overtakes without breaking sweat.

You’d forgive such a comfy car for dropping the ball when you crack on, but the A7 more than copes with B-road mischief. Most notable is the combination of muscular acceleration, purposeful noise, composed suspension and the quattro drivetrain’s rear bias with unflappable traction – you’ll probably run out of nerve before the A7 flails for answers.

It’s a tough benchmark for the Panamera, but it too impresses. This car’s interior shrugs off 22k miles of family life, and still looks special with its confident lines and high-quality materials – the leather seats are particularly supple, and it’s really only the tiny infotainment screen that dates this car. There are two individual rear seats to the Audi’s rear bench, but both cars have ample legroom and just enough headroom for four large adults.

The driving position and visual cues quickly establish the Panamera as the 911 of saloons – those seats blend comfort and support, and can be dropped far down for maximum sportiness. The steering wheel is purposefully small, and the iconic five-dial instrument binnacle is still dominated by a large central rev counter. Lime-green needles hint that something’s radically different, however.

This Panamera starts without troubling the V6 petrol, and moves away with only a whir from its electric motor. That it continues to use only electricity at good speed and under some pretty determined acceleration is impressive. There’s a familiar precision and consistency to the steering and pedal weights, with even the brakes having a mostly natural feel, despite having to transition between regenerative and conventional braking, depending how hard you’re driving.

Riding on standard air suspension, this car also soaks up bumps nicely in its default setting, but it’s extremely wallowy for a Porsche. Sport mode significantly tightens things up, allowing you to carve far more convincingly cross-country, and also provides full access to the performance. It’s a rapid enough car, but the V6 isn’t the most tuneful or willing petrol engine in this guise – no flat-six zing here – and the Audi feels quicker and more together when pushed hard through corners, where the Porsche’s extra mass starts to work against it – it weighs 2095kg to the Audi’s hardly svelte 1880kg. But as a refined, quick and prestigious alternative to the Audi, the Panamera makes a lot of sense, so long as you can find a deal that works for you.

Servicing for both hybrid and diesel Panamera models rotates between a minor and major service every two years or 20,000 miles. Porsche Reading charges £460 for a minor service and £567 for a major service for the Hybrid, including VAT. Diesel models are £469 and £625 respectively. However, the owner of our featured Panamera S E-Hybrid has paid just £112 for an oil-change service at a main dealer since buying his car in July 2017. Specialists such as RPM Technik and Autofarm are also worth a look.

Audi offers fixed-price servicing over an 18-month period for models up to three years old. It includes two services and costs £468 for cars of 2.0 litres and under, and £594 for those over 2.0 litres. You can split costs monthly too. This could be a good option for drivers covering high mileages, but it might not be best for you. Why? Because Audi models can be programmed for either fixed or flexible servicing – fixed servicing means the car is serviced every 9000 miles or annually, while flexible is up to 19,000 miles or two years. So you might only need one service during that timeframe.

The A7 Sportback comes with a three-year, 60,000-mile warranty in the UK, which can be extended at extra cost – the price depends on the car’s specification and mileage. Porsche specialists RPM Technik say using a main dealer or specialist with PIWIS diagnostic equipment is essential, as it’s the only way to correctly diagnose many faults. ‘Generally Panameras are tough cars with plenty out there pushing past 150,000 miles,’ says RPM’s Greig Daly.

Typical gremlins include creaking rear suspension due to rear spring failure (on cars without air suspension, which is standard on Hybrids), central locking issues and the PCM infotainment crashing (usually requiring a new PCM). The 3.0-litre turbodiesel can suffer from oil leaks. ‘This is a very expensive fix, which requires the engine out and partial – or even full – engine rebuilds on occasion.’

However, Porsche offers warranty cover for all Panameras, so long as they’re no older than 14 years old at the start of the warranty (and no Panamera is yet that old) and have covered fewer than 125,000 miles. But you do need an 111-point check (£252), and the car needs to have been serviced to Porsche guidelines, if not at the main dealer. A one-year warranty costs £1140, increasing to £1990 for two years. We’d take a very good look at that if we were buying.

The Panamera is a long car with compromised rear visibility, so the optional reversing camera is a worthwhile upgrade. The Hybrid came as standard on air suspension, but the diesel didn’t – Stephen Chapman of Porsche Club GB cautions that the ride on optional 19- or 20-inch alloys can fidget when combined with steel springs, but the standard 18s look weedy. Big wheels on air suspension is the win-win combination.

The Audi A7 comes as standard in Sport trim, with S-line spec a £2900 premium. It upgrades from 19- to 20-inch alloys, Matrix LED headlamps and dynamic rear indicators, S-line interior and exterior upgrades, sports suspension and front sports seats in leather/alcantara. The Comfort and Sound Pack is £1895 and includes 360º cameras, Bang & Olufsen 16-speaker audio, extra LED lights for the interior, plus keyless entry/go. Metallic paint is £685 (only plain black and white are free), a panoramic sunroof £1750, privacy glass £475 and acoustic glazing £525. Extended leather brings nappa leather to bits you don’t sit on for £1000. Adaptive air suspension is £2050 and you can splash thousands on driver-assistance systems, including night vision for £2200.

Both Audi and Porsche put in a good showing here. Priced from just £30k, the S E-Hybrid now represents fantastic value for money, and still looks and feels like a much more expensive model. It drives well, it’s refined and beautifully built, and its e-power party piece remains a useful novelty. However, it does lack the sparkle and precision we expect from Porsche when driven like a sports car, and real-world mid-30s mpg is much more likely than Porsche’s claimed 91mpg.

You’ll need to do the maths for your own personal Duo are different in every mechanical detail, but very similar in spirit circumstances and likely driving, and that may make the Panamera an extremely attractive proposition – there’s no tax, you can glide freely into London, used deals are tempting, the availability of a factory warranty gives comparable peace of mind to a new model, and you may be doing such small trips that never burning a drop of petrol is possible, if highly improbable.

But I don’t think the Panamera is the better car to drive. That distinction falls to the Audi. Its ride, handling and performance all trump the Porsche, particularly when you really turn up the wick, and it’s then that you notice the Audi is over 200kg lighter. That its infotainment is so much more advanced and its rear quarters can seat three rather than two only helps push it over the line first.

Decent car, that Porsche, but if the sums stack up put your cash in the Audi.

Panamera wallows more than you expect in a Porsche, but both ride well. One’s new, one’s used, but both are built to last; quality in every detail.

Too many switches, not enough screen, but last-generation cabin is still classy A7 uses same tech as A6 and A8 but with more driver-orientated layout.

Audi’s hardly twinkle-toed but it out-corners a Porsche hampered by its extra weight.

Both combine coupe curves with rear doors and hatchback boots. Duo are different in every mechanical detail, but very similar in spirit.

The E-Hybrid now represents fantastic value for money, and still looks and feels like a much more expensive model.