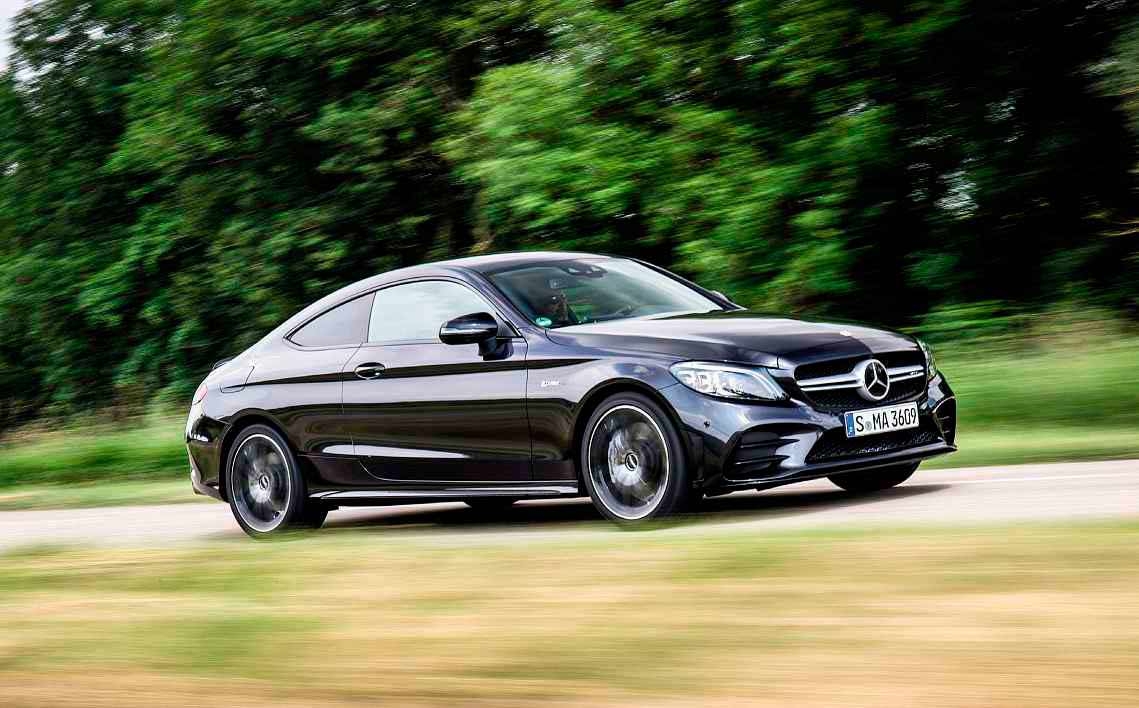 Flying under the radar is a speciality of the Mercedes-AMG C43 C205, a car that seamlessly blends stealth and speed. Slotting in below the bombastic C63 C205, the C43 is a more measured machine that falls into the increasingly rare category of Q-car, its impressive blend of pace, agility and everyday usability only really obvious to those in the know. So it’s somewhat fitting that its mid-life refresh is just a little low-key.

As before, you can choose from saloon, estate, coupe and cabriolet versions (priced from £47,720, £48,920, £50,010 and £53,829 respectively) and on all of them the changes are of the blink-and-you’ll-miss-them variety. True aficionados may notice the subtly different LED headlamps and tail lights, plus the reprofiled bumpers. Oh, and the quad-exit exhausts are now round, not rectangular.

The more obvious changes are inside, where the adoption of the S-class’s electrical architecture helps bring the C43 bang up to date, with the option of a 12.3-inch configurable TFT display in place of analogue dials, and a larger 10.25-inch infotainment screen as standard. There’s also a new steering wheel, which feels great in the hands and now boasts touchpad multifunction controls. It all adds to the feel-good factor of the classy cabin, but it hardly gets the heart racing.

And what about under the skin? Again, it’s all very subtle. There are fractionally larger turbos for the 3-litre V6 engine that run a maximum of 1.1bar of boost – an increase of 0.1bar. The result is a useful 385bhp (up 23bhp), while torque remains the same at a muscular 383lb ft. There have been some software tweaks to the nine-speed DCT Speedshift transmission, too, but by and large the oily bits are carried over. That means AMG’s Ride Control steel suspension with adaptive dampers, plus the AMG-tuned 4Matic all-wheel drive that delivers a 31:69 torque split front to rear.

This reluctance to mess with the C43 is a reason to be cheerful, because there wasn’t a lot wrong with the original. Leave the car to its own devices in Comfort mode and it’ll glide along in the same supple and serene manner, only a distant exhaust burble hinting at its true potential. Select Sport or Sport+, however, and the C43’s character quickly changes. Not least the exhaust note, which gains a howling tenor timbre that’s more cultured and less ear-splitting than the C63’s baritone blare. Crucially, the throttle also sharpens and the V6 is kept simmering on the boil.

The Sport modes also add some tension to the chassis, heft to the quick steering and quicken the gearshifts. Configured like this, the C43 will simply monster most twisting secondaries, its strong turn-in bite, tenacious grip and unflappable body control allowing you to cover ground at an astounding rate.

It doesn’t make the Mercedes humourless, though – far from it. The 4Matic’s rearbiased set-up delivers just enough throttle adjustability, and even the occasional step sideways out of slower stuff. It’s certainly more entertaining than the slightly straightlaced Audi S4 and S5 twins. The gearbox isn’t perfect, however – usually smooth and quick, it sometimes sends home a jerky, slow-witted downchange and can stutter on maximum-rev manual upshifts.

Knock the C43 C205 back into Comfort, though, and it reverts to being a discreet and selfeffacing Mercedes that’s no harder to live with than a C220d C205, and it’s this duality of character that continues to make the C43 such a compelling proposition.