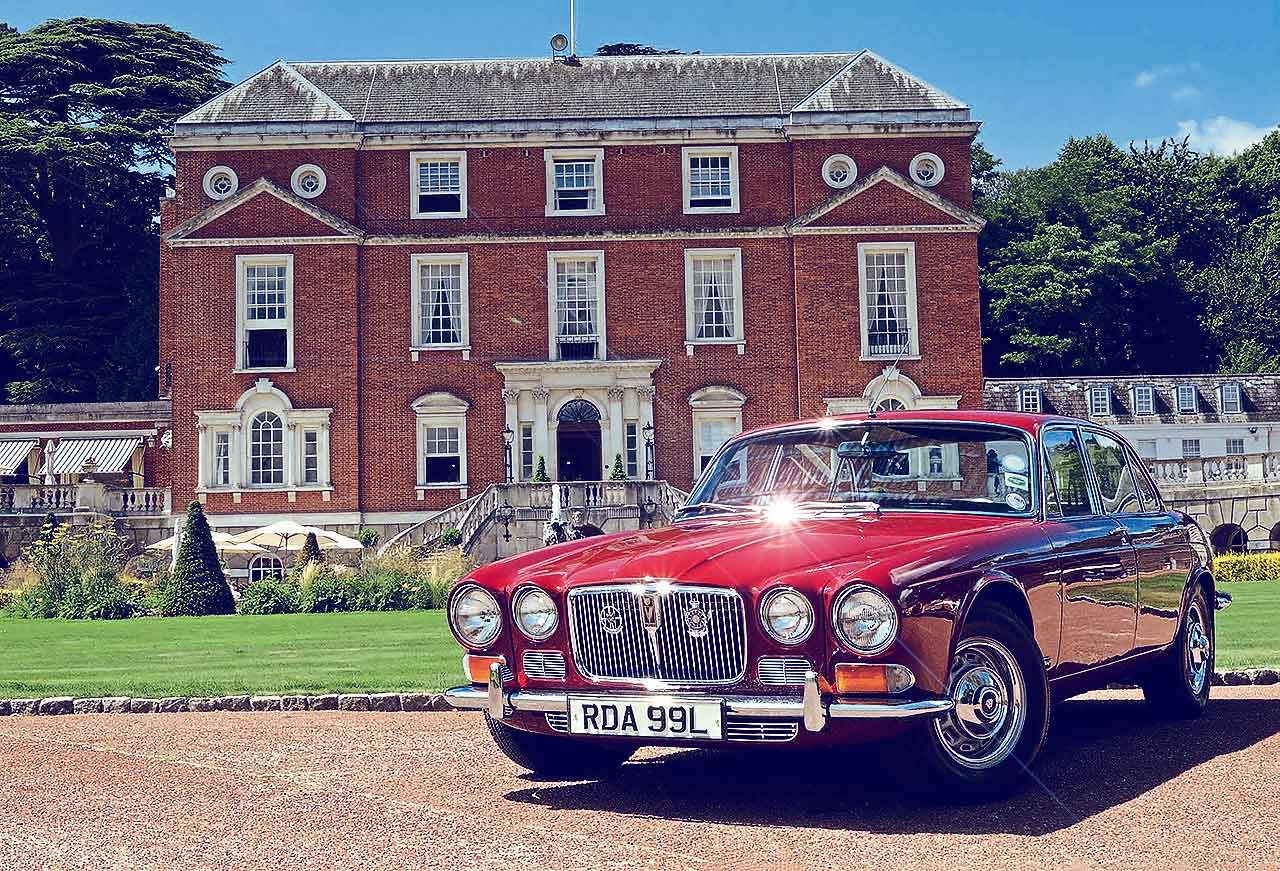 Not only is this long wheelbase XJ12 Series 1 in almost original condition and the earliest known example, it is also suspected to have appeared at the 1972 British Motor Show at Earls Court . Words & Photography by Paul Walton.

EARLIEST XJ12  For the XJ12’s 45th anniversary, we delve into the history of the earliest known Series 1 long wheelbase and drive this majestic car.

Best Car in the world, proclaimed the cover on the August 1972 issue of Car magazine about the then-new Jaguar XJ12. It was a huge statement, but Car wasn’t the only publication to lavish such grandiose praise on the saloon.

“It is a marvellous achievement, deservedly the envy of the world,” said Autocar in March 1973, while Bill Boddy wrote in the June 1973 edition of Motorsport, “The 12-cylinder saloon from Coventry is quite outstanding and most certainly in the best Sir William Lyons’ tradition of offering such stupendous value-for-money as to drive the opposition out of the market place.”

It’s easy to understand this acclaim, starting with the car’s design. Although the XJ had been on sale for four years by the time the V12 became available in 1972, it hadn’t dated: it remained one of the best looking cars on the market, with perfect proportions and exquisite detailing. Plus, although the 4.2 version of the XJ6 remained a fine performer, Jaguar’s new V12 put the car into a different league altogether.

Developed from the same 5.0 V12 that appeared in the one-off XJ13 and designed to keep Jaguar competitive with European manufacturers such as Ferrari and Mercedes-Benz as well as those in North America, the production version was as powerful as it was majestic. Producing 253bhp, it gave the XJ12 a top speed of 150mph – huge figures for a British four-door saloon and more akin to that of an exotic Italian supercar. And it wasn’t only its speed that was impressive, so was its refinement. Being quiet and smooth, when matched with the XJ’s already famous sublime ride and handling, there is little wonder that journalists of the time waxed lyrical about the car.

The XJ12’s reputation was further strengthened when the long wheelbase version was unveiled at the 1972 Earls Court Motor Show. By being 10cm (4in) longer, it answered criticisms that the standard saloon did not have enough rear legroom. At a little over £4k in 1972 (around £50,000 today), it was the most expensive Jaguar-badged car the company produced at the time, with only the Daimler Double- Six and top-spec Vanden Plas costing more. With a better level of standard equipment (including air conditioning) and the powerful, smooth engine, the XJ12 LWB was the perfect limousine for heads of state, film stars and Somerset farmers.

One of the first to buy an XJ12 LWB was Donald Saunders, a Glastonbury farmer who took delivery of chassis number 2C 1088 BW, the 87th example built, in November 1972. It was painted in Regency Red with a beige interior, but wing mirrors and headrests weren’t fitted. As Saunders’ car arrived on the farm just a month after the long wheelbase’s unveiling at the Earls Court Show, there is a suggestion that it was the same XJ12 LWB as displayed on Jaguar’s stand. But we’ll come back to that.

The farmer owned his red example for almost 40 years, until he sold it in 2009 with just 30,000 miles on the clock. According to the XJ12’s second owner, Donald Morgan, Saunders used to buy a new car, use it for two or three years, and then store it in a barn. He says that when he bought the XJ12 there were around 20 other dusty and unused cars, including several Jaguars and Mercedes-Benz saloons, alongside it in a farm shed.

Although Morgan had recommissioned the XJ12 to put it back on the road, he put the car into an auction six months later because he found he was not driving it enough. That was when current owner Marc Hanson saw the car.

Marc wanted a classic Jaguar saloon that was practical enough for his young family, and was initially looking for a Mk 1 or Mk 2. “I hadn’t really considered an early XJ since I don’t like the Series 2,” he admits. “But when I saw a Series 1, I thought, ‘Blimey, that’s lovely’. This car came up for auction in the West Country in 2010 and it sounded good. It had low mileage and one owner for most of its life, plus the current owner had spent £6,000, so I bought the car unseen.”

As is often the way with cars bought at auction, it wasn’t that easy. Following its 30-year hibernation, the car’s red paint was covered in tiny micro blisters, so Marc had the shell taken back to bare metal and resprayed. Guildford-based Jaguar specialist Winspeed Motorsport then worked hard to set up the huge engine correctly, and it now runs perfectly.

It was Marc who first suggested that his car was the one that appeared at the 1972 Earls Court Motor Show. “The picture I’ve seen of Jaguar’s stand shows a Regency Red XJ12 long wheelbase exactly like this one. It has the same style of ventilated wheels in silver with chrome surrounds, and it lacks headrests and wing mirrors. Sir William Lyons preferred cars not to have wing mirrors since the car’s lines were better shown off without them. Consequently, his own cars, plus those displayed on Jaguar’s show stands and photographed for brochures, never had them.” The biggest argument in Marc’s case, though, is the car’s first owner. The Browns Lane factory suffered from a rare strike in July 1972, a few weeks after the XJ12 had been announced, meaning cars were in short supply. Plus, the long wheelbase was revealed at the Earls Court Motor Show in October 1972, only a month before Saunders took delivery of his car. “How could Donald Saunders, a farmer, get hold of one just a month after it had been revealed when XJ12s were in short supply? I reckon he bought this car there and then at the show,” says Marc.

Strengthening his argument, according to the car’s heritage certificate, while the original distributor is listed as Hewitts Garages Ltd, in Wolverhampton, there is no mention of a local dealer. Being close to the Browns Lane factory, did the garage prepare and register the car before Saunders took delivery of it directly from Jaguar?

As the company never recorded the show car’s chassis number, we’ll never know for certain, but it’s a tangible story that adds a little mystery.

Show car or not, it’s still very special. Not only is it the earliest XJ12 Series 1 long wheelbase known to have survived out of 754 examples built, but it’s also in incredibly original condition. Other than the respray, the car has never been restored and, after covering only 32,000 miles, it remains almost as it was the day it left Jaguar’s assembly line, 45 years ago. The original chrome still shines brightly, too – the result of being hidden in a Somerset barn, away from the elements, for over three decades. The original tool roll, dirty and grubby from use, remains in the boot, and the worn beige interior is also original, other than later, black plastic speaker covers in the front door cards. The lacquer on the wood dashboard is peeling in places and a little plastic plaque on the glovebox lid proclaims, ‘Rothwell and Milbourne Ltd, Malvern.’ Was this Saunders’ local garage?

Other than the vertical V TWELVE badge on the front grille (which features vertical bars instead of the XJ6’s mesh, egg-crate-style of radiator), there is little to hint at what this car is capable of. There might be a monstrous engine below the bonnet, but thanks to the lack of brash aero aids available to today’s super saloons, the car is as discreet as a gentleman’s butler. It’s only when behind the wheel and able to see the gold V12 badge on the central console and the gorgeous white-on-black Smiths speedo that goes all the way to 160mph, that I can believe its true capabilities. That’s a high speed for today’s cars, never mind from 45 years ago when most family saloons would struggle to reach 100mph. The big V12 churns into life the moment I turn the key and settles down to an almost silent thrum. Jaguar used to say the 5.3 engine was so quiet you could hear the clock ticking. I’m not sure about that, but I do check the rev counter to make sure the engine is running.

Pulling the thin T-bar-handled gear selector down to drive, and with a little pressure on the accelerator, the car glides forward. With light steering, manoeuvring the car is easy, although with the wheelbase being 10cm longer than the standard car’s, I’m always aware of its size, and rear visibility is poor on account of the lack of wing mirrors.

With a clear road ahead of me, the big engine responds instantly. The three-speed BorgWarner automatic gearbox (standard on all Series 1 XJ12s) kicks down, rewarding me with a sudden rush of acceleration. It’s not eye-wateringly fast, but this engine is certainly strong, and I’m certain that if I keep my foot down it will keep accelerating until I reach 150mph. Perfectly set up, there is no hesitation from the V12, and its power delivery is smooth and linear.

One of the reasons so much praise was given to the XJ Series 1 is its ride, which hasn’t changed in the 45 years since this car was built. Comfortably absorbing bumps in the road, the cabin is calm and quiet. Yet with the same independent rear suspension as the E-type, the big car remains remarkably composed through fast bends, feeling more like a nimble sports saloon than a cumbersome luxury limousine. However, drive the car too fast and body lean becomes more pronounced, a reminder of its hefty weight: 1,879kg. Of course, the XJ12 isn’t about such vagaries as speed. It’s about wafting along in comfort and style, but still safe in the knowledge that it can out-run anything on the road.

While we can’t know whether Marc’s XJ12 is the 1972 show car, due to its originality and current condition we can appreciate that the XJ12 Series 1 really was the best car in the world.

OPPOSITE: Jaguar’s 1972 Earls Court Showstand; was this car part of it? CLOCKWISE FROM TOP LEFT: The original veneer on dash is peeling; the Smiths speedo goes to 190mph; was this Saunders’ garage?; all XJ12s had the three-speed automatic gearbox.

BELOW: The XJ12 LWB Series 1 has perfect proportions LEFT TO RIGHT: Double headlights are anXJ tradition; discreet badging shows this is an XJ12; ventilated steel wheels, the same as the 1972 show car’s.