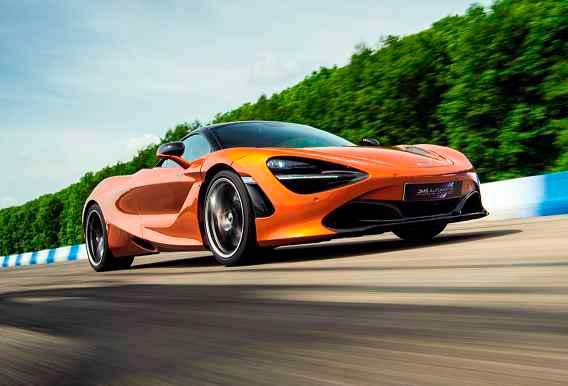 2019 DMS McLaren 720S. Our eCoty 2017 winner gets a significant power boost, making it even quicker and more rewarding too. Photography by Aston Parrott.

The last thing you think when driving a McLaren 720S is ‘this car needs more power’. So why on earth would anyone bother to tune one? Well, DMS has been developing packages for McLarens since the 12C, remapping the turbocharged V8 to increase power and improve driveability. So when the 710bhp 720S was released, DMS set about extracting more power from it too, because, for whatever reason, that’s what its customers will expect.

Without the strict confines of OEM tolerances, DMS’s software changes alone increase the engine’s outputs by 100bhp and 74lb ft, but you don’t have to stop there. The standard catalytic converters can be replaced with higher-flow units, which, combined with the remap, allow the engine to produce a massive 819bhp and 657lb ft of torque – 109bhp more than the standard 720S, and 30bhp more than the lightened, stronger version of the same engine in the Senna. The full package costs £9000, but you can have the ECU upgrade on its own for £4800.

It’s impossible to experience the full performance of the DMS car on the road, not least because your driving licence could be whisked away from you before you’ve even tried full throttle. An open, quiet, two-milelong runway, however, is the perfect place.

Normally, the scenery at the Bruntingthorpe Proving Ground is too far away for a car to really feel that fast here – but that’s not the case with the DMS 720S. It accelerates up to big three-figure speeds with such unbelievable ease that, no matter what the environment, you can’t help but be amazed by its raw pace; 150mph is as easily achievable as 50mph is in a ‘normal’ car. Acceleration figures aren’t necessary to know that this 720S is insanely fast, but with a Vbox and a runway at our disposal, it would be rude not to…

Getting a clean run isn’t easy with so much performance and only rear-wheel drive to harness it: the initial take-off is good when using launch control, but at the top of second and third gears the rear wheels start to spin as the turbos boost even harder. And that’s with the traction control on. The additional 109bhp clearly has the better of the driver aids, but rather than intervening furiously, they allow the car a bit of freedom. Once it’s built some momentum, this 720S feels unstoppable – only at around 190mph does the digital dash stop scrolling through numbers at an alarming rate.

We record a 0-60mph time of 2.96sec, which is 0.23sec slower than a standard 720S we timed on a different day (although admittedly this was with the help of some McLaren engineers). After 60mph, however, the DMS car starts to catch up. By 100mph it T has just edged ahead, and it reaches 150mph in 10.15sec – 1.4sec faster. The runway isn’t long enough to reach (or pass) the regular car’s top speed of 212mph, but even when leaving a generous distance to slow down, it isn’t difficult for the 720S to hit 200mph.

Because you can’t do such speeds on UK roads, for DMS’s upgrades to be worthwhile they need to bring benefits on the sort of tight, twisting tarmac that makes up a typical just-for-fun blast. And, although it seems ludicrous to write this, the extra power actually makes the 720S easier to drive. When you’re in the mindset to enjoy every corner and relish every straight, the car responds more keenly to throttle inputs. Every touch of the accelerator has the 720S up on its toes, straining at its electronic leash.

With the revs high you have exceptional control over the engine, and now the relaxed traction-control system that eroded the car’s acceleration times can be used to your advantage, as it’s you who decides how much power the rear tyres can handle, not the electronics. Deploying and managing such a magnitude of performance on the road is an exhilarating feeling, but one with a heavy weight of responsibility attached.

As you’d expect from an 819bhp rear-wheel-drive turbocharged car, it can be scary at times. When you’re relaxed, driving at a decent pace but perhaps not considering each braking point and apex in scrupulous detail, the engine frequently operates just off-boost. Then occasionally, say in a straight line when pulling (relatively) gently away from a corner, you’ll breach 5000rpm and then all hell breaks loose to make things really interesting. The transition from off to on boost is more pronounced with the DMS upgrades, and the tyres will spin as the turbos start to whoosh and whistle. It’s here where you can be caught out, as the overburdened ESP system pretty much holds its hands up in surrender, leaving it up to the driver to manage the situation. Fun… at least some of the time.

This is a car that not only deserves your full attention, but requires it; you cannot become complacent and relax. But how many 720Ss are going to be used on daily commutes or to carry out mundane tasks? Very few indeed. So why not have a supercar that’s a little bit more frightening – especially as it’s also quantifiably faster and even more enjoyable when you’re switched-on and ready.

+  Even more exciting when you’re in the mood

–  Scarier the rest of the time

Above: DMS 720S is an exhilarating drive, but with 819bhp and 657lb ft of torque on tap it requires your full attention.