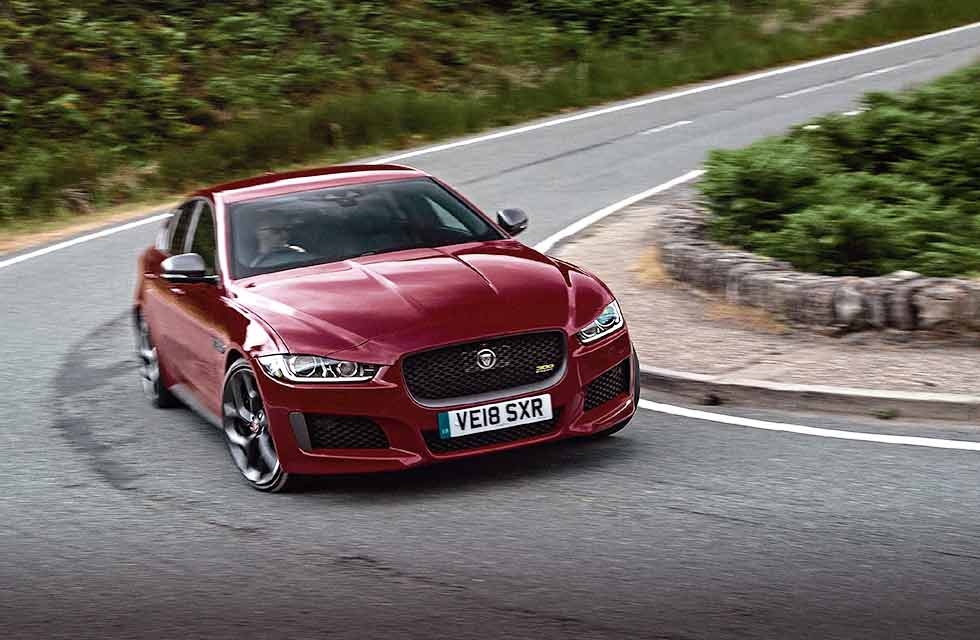 Coming Together. With its 300PS 2.0-litre engine, composed chassis and good looks, the 300 Sport is the best XE to date. We take one for a drive to explain why. Words Paul Walton. Photography Jaguar.

FIRST DRIVE XE 300 Sport  Is this Jaguar’s best-handling saloon? We took the new XE Sport 300 with the 300PS 2.0-litre turbo for a test drive, and now believe it to be the best-handling car in Jaguar’s current range. Find out why.

We just started playing and it came together as if by magic,” said Robby Krieger, guitarist for the legendary band The Doors, during a 1994 interview about the group’s seminal 1971 album, LA Woman. With the introduction of the 300 Sport, the XE has also come together recently, although it probably wasn’t by magic–more logical thinking and some sensible engineering. The new spec level transforms the car into one of the best-performing saloons anywhere and is arguably the best-handling car Jaguar produces right now.

Central to this change is the XE having the option of the 300PS (296bhp) 2.0-litre turbo petrol engine, the same one that’s available with the F-TYPE and E-PACE. Refined, responsive and rapid, adding it to the XE’s range is a stroke of genius. Although the XE already had a sports version – the now-defunct V6-engined S, which the 300 Sport directly replaces – the 2.0-litre is a better match for the car. It turns the XE into a genuine sports saloon rather than the softer GT the S had been. Plus, on paper, it delivers a slightly better fuel economy: 36.2mpg compared to the V6’s 34.9mpg, although in the real world you’d be hard pressed to notice the difference.

The engine is available with other XE trim levels, but it’s the top-of-the-range 300 Sport I’d go for due to its good looks and sportier image. It doesn’t differ from the cheaper models by much, but the dark satin grey finish to the exterior trim, five-spoke alloys and the subtle yellow badging on the grille and bootlid turn an already good-looking car into a striking one.

The interior was probably always the XE’s weakest area. The cheap appearance of the black plastic used throughout lacked the panache of rivals’ creations, such as the Alfa Romeo Giulia – its tan leather cabin could be straight out of a Maserati. Thankfully, the 300 Sport changes this. While the basic architecture and design remains the same, the standard yellow stitching across the dash and sports seating, plus the 300 Sport logo embossed on the front headrests, steering wheel and carpet mats, do much to lift a dowdy atmosphere.

With a clear and straight road ahead of me, it’s time to give it the beans, and I’m immediately surprised by the 300 Sport’s mid-range punch. Even when accelerating from 50mph, there is no hesitation in its power delivery and, as the eight-speed ’box clicks down a couple of gears, the car pushes forward with an urgency usually associated with the V6. The engine delivers its power effortlessly and (unlike the lower-powered 2.0s in the XE range, such as the 180PS – 177bhp – diesel), it doesn’t need to be worked hard. The 300’s 295lb ft of torque is always there, bubbling away beneath the surface waiting to be unleashed by my right foot. Part of this is due to the car’s weight. Coming in at a mere 1,620kg, it’s 35kg less than the V6 S, so despite having 80PS (79bhp) fewer, the 2.0’s official 0-60mph time (5.7 seconds) is just half-a-second off the 3.0’s. And with 300PS, I don’t need to be a driving god to contain it. I always know what to expect when I squeeze the throttle, how it will respond and, more importantly, that there won’t be a ditch-inducing surprise as the torque arrives in an uncontrollable dollop. I often find that the ZF 8HP eight-speed gearbox – standard with the 300 Sport and across the current Jaguar range – can be easily confused when mated to the lower-powered versions of the Ingenium 2.0 engine; with comparatively little power through so many gears, it can’t always decide which one to choose. But not here.

In this application, the eight-speeder works in perfect harmony with the 300PS engine. The changes, both up and down, are always to the correct gear and always right when I need them. I can, of course, override the ’box using the steering-wheel-mounted paddles, which allows me to balance the throttle in readiness for a fast corner.

The XE’s lightweight aluminium construction and clever integral-link rear suspension (which delivers both lateral and longitudinal stiffness) means the car has one of the best chassis of any compact saloon. But, unlike the 3.0 – which often felt nose heavy – or the other 2.0 models that don’t have enough power to make the most of it, I’ll put my neck out and say that this is the engine the car has been waiting for. The addition of all-wheel drive as standard allows the 300 Sport to change direction with the immediacy of a hunting cheetah, suffering from only minuscule amounts of body roll. With 90 percent of the power sent to the rear wheels under normal conditions, the 300 Sport retains the same lithe characteristics as a standard rear-wheel-drive saloon.

But, with torque sent to the front axle the millisecond the AWD’s Intelligent Driveline Dynamics system detects any slip, the car remains composed no matter how hard I push through a corner, which the fast electric steering and its sniper-levels of accuracy enable me to do with swift efficiency. Yet the 300 Sport doesn’t have to be driven like a loon. The ride is reasonably supple and the exhaust bark not so loud or as fruity as the F-TYPE 2.0’s (which the ten-year- old inside me misses), so the 300 Sport can be used as per any other 2.0-litre saloon.

I genuinely love this car. It returns something that’s often missing from driving in the modern age: fun. As the road falls away to reveal some enticing fast bends and long straights, I feel the same tingle of anticipation as a surfer seeing the huge waves off Bondi Beach, and I reckon it’s as good on a twisty B-road as the F-TYPE.

However, with its cramped rear seat and smallish boot, the XE has never been the most practical of models. If there were a more lifestyle-friendly estate version it would be my ideal car. But then, there is an XF Sportbrake 300 Sport, which, although I’ve yet to test, shares many of the same components, including the chassis and drivetrain, so I’m guessing it will be as entertaining as the XE. The 300 Sport model isn’t only making the XE come together, but all of Jaguar.

“I genuinely love this car. It returns something that’s often missing from driving in the modern age: fun”