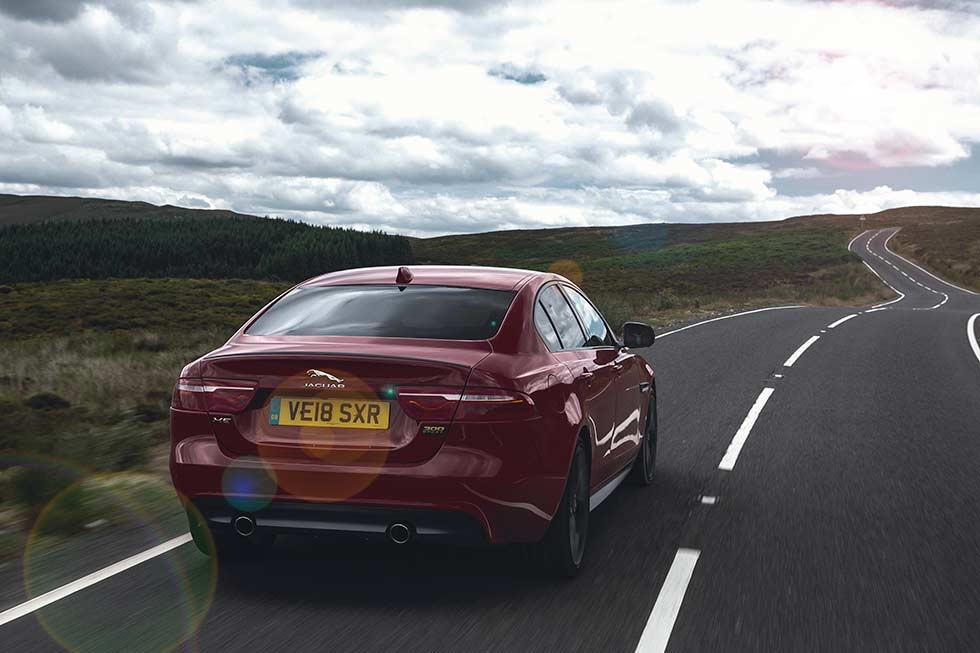 Jaguar has long needed a HALO model to give the XE a push from the top; a model to sprinkle some sex appeal across the rest of the XE range, which, let’s face it, has so far failed to take it to the Germans that dominate this sector, both commercially and/or dynamically.

The £150k, 592bhp 2019 XE SV Project 8 is too far removed, too unattainable to really do the job. And while the 375bhp V6-powered XE S, which this new turbocharged, four-pot 300 Sport effectively replaces due to emissions issues, tried reasonably hard to perform the role, truth is it never quite pulled it off. Cars like the Audi S4, BMW 340i M Sport F30 and Mercedes-AMG C43 C205 were, to be blunt, all well beyond the reach of the refined but by no means rabid XE S.

Enter the new XE 300 Sport, which although still not a fully committed attempt to solve this issue, at least seeks to undercut its German rivals by entering the space just below the S4 and Co, with styling and dynamic upgrades that should, reckons Jaguar, connect more clearly with the enthusiast audience. Question is, does it go far enough?

Well, in its quest to engage with the keener driver, the 300 Sport is powered by the pokiest version yet of Jaguar’s – thus far – ever-so-slightly underwhelming four-cylinder turbocharged ‘Ingenium’ engine. In this case it produces 296bhp at 5500rpm and 295lb ft between 1500 and 4500rpm – outputs that are still only so-so beside its aforementioned Teutonic opponents.

Jaguar says the Ingenium has been tickled internally to improve its refinement, and to deliver smoother but more sporting responses via new mapping for the throttle, exhaust and transmission – which is inevitably the ubiquitous eight-speed auto from ZF.

The chassis has also been fettled, although to be fair the four-wheel-drive 300 Sport is little more than a collection of parts that were previously optional on the V6 S. Adaptive dampers become standard, as do slightly bigger brakes, while the wheels and tyres also grow to 19 inches, with 20-inchers available as an option (fitted to the car we tried).

Visually, the 300 Sport has the likeable, if typically restrained, air of a Q-car. Despite its 300 Sport badging on the nose, tail and sides, plus a subtle black tail spoiler and those big wheels and tyres, it doesn’t shout about itself too loudly. Inside there are numerous bits and bobs to distinguish it above and beyond any other XE (more 300 Sport badging on the seat headrests and door casings, etc), yet it still feels quantifiably like a regular XE from behind the wheel. Again, the Germans all go a touch further and feel more bespoke in this respect.

Yet on the road the 300 Sport does feel perkier and more sporting than any other XE, even if its overall dynamic personality remains that of the calm, collected, composed character, rather than that of the true road-burner. It is deceptively rapid across the ground, however, and the highlights are the steering – which has a lovely smooth accuracy to it and suffers from seemingly zero kickback, even over the roughest surfaces – and the way the adaptive suspension breathes so cleanly with the road, which is a delightful thing to experience. As is the almost magical absence of tyre and road noise generally.

Jaguar really has nailed the refinement of the 300 Sport, and it feels quietly majestic on the move as a result, even if it never quite manages to make the hairs on your neck stand to attention. Maybe it’s a touch too chilled for its own good, given the brief to spread some bravura across the rest ofthe range?

Because on the one hand it’s hard, if not impossible, to objectively criticise what the 300 Sport does in any particular area. It covers the ground with supreme ease and speed, while providing enough entertainment in the process to engage most keen drivers, most of the time. In this instance it achieves exactly what Jaguar wanted it to because it is clearly more entertaining to drive than any other XE on sale. But on the other hand, subjectively the 300 Sport could do with a bit more drama from its near-silent engine and exhaust, plus a touch more edge to its dynamics in general, if only to take it a bit closer to what the S4, C43 and 340i M Sport all deliver in their own different ways.

Then again, the 300 Sport really is a lovely thing to drive in many respects, with a fine chassis, a tasteful and roomy interior, great steering and deceptively strong cross-country pace. If that’s exactly what you’re looking for from your sports saloon, the Jaguar might just be worth the extra outlay.

Above: dark accents and discreet badging mark out the 300 Sport; optional 20-inch wheels will set you back an extra £840.