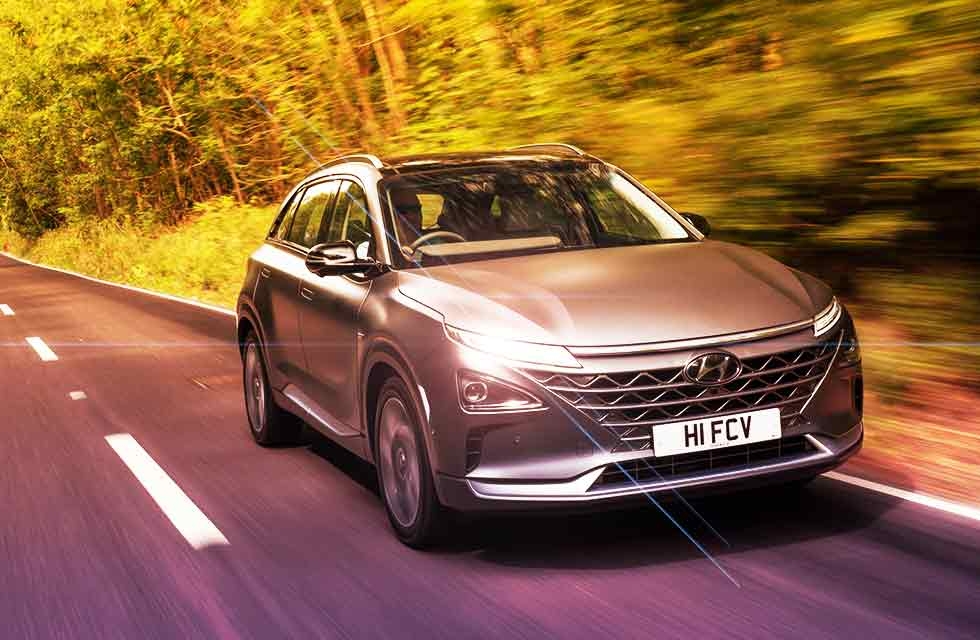 Carmakers including Hyundai – which also produces battery electric cars, by the way – reckon hydrogen is still the future fuel of choice, thanks to the convenience it offers with respect to ease and speed of refuelling a vehicle, as well as the relative energy density that ensures a relatively small package enables an electric car to have a long driving range.

Replacing the ageing ix35 FCEV, Nexo is Hyundai’s latest generation of hydrogen fuel cell powered electric car. It’s a luxury electric SUV that just happens to have three tanks of hydrogen, in place of a battery, to provide power to the motors.

The setup is familiar, with much of the electric components having been borrowed from the Kona Electric, including the motor and regenerative braking system.

From the outside, Nexo looks surprisingly ordinary. That’s on purpose, because the Hyundai Motor Group (including Kia) hopes to build half a million hydrogen vehicles by 2030. The Nexo therefore is aiming to pave the way in more way than one. Firstly, it looks striking yet conventional, with the now-typical aggressive front ‘face’ and a SUV silhouette. Inside there’s room for five comfortably, though it’s not as big as it looks, fitting in-between the Tucson and Santa Fe in length. Due to the triplet of gas storage tanks, the boot size isn’t exactly voluminous, but it’s ample for shopping, buggies or the family dog (but not all at the same time).

Our car was draped in grey leather, which felt fittingly high-tech for the car. Materials are typical for Hyundai; a decent blend of practical meets quality. There’s plenty of detail and excellent fit and finish yet ultimately it doesn’t feel top end.

Though electric cars are known to be super-fast, the Nexo isn’t but it’s certainly no slouch either. With 0-62mph taking fewer than ten seconds, its plenty quick enough and especially thanks to the ample torque available from the off. Only when at speed does it really start to struggle, so don’t expect any Tesla-eque overtaking manoeuvres in split seconds. It is, however, sublimely refined on the road which makes the performance pale into insignificance as it is able to cruise along like the finest silk chemise.

This is where the Nexo gets interesting. Serving as Hyundai’s flagship model, the South Korean company has thrown the book at it (or should that be tablet nowadays) packing it to the rafters with the latest innovations.

First up is the fuel cell itself-the latest generation that’s more powerful and more compact than the ix35 FCEV that came before it.

There’s an vast array of buttons on the floating centre consoie for starters – enough to make Steve Jobs turn in his grave – though in practice this isn’t an issue. The top row takes care of infotainment, the second row climate control and the third row is a mix of manual screen and gear controls.

The on-screen menu is surprisingly simple and logically laid out, and hides a wealth of vehicle information, much of it the same as other Hyundai while there’s a special section dedicated to the inner hydrogen workings. Here you can find out all about the state of the gas tanks, consumption, range estimations and so on. You can spend a full hour on it and only scratch the surface. For those opposed to carmakers’ demanding screen time, Android Auto and Apple CarPlay come as standard.

The most remarkable aspect of driving the Nexo is how unremarkable it is. The technology and powertrains are expertly kept behind a veil, while the simplicity of vehicle operation is immediately apparent. Stab the ‘D’ button to move forward, ‘R’ for reverse and that’s as complex as it gets. Steering is particularly light and easy, while the car’s soft suspension setup amplifies the mobile living room nature of the car. Driving is child’s play – pure and simple. However, this does translate into an often remote sensation, with little by way of road feel through the steering or chassis. That’s not a criticism, as it’s very fitting for the car.

Undoubtedly, Nexo is streaks ahead of the ix35 FCEV that it replaces, and a cut above the less practical but older Toyota Mirai too. As good as the car is, it may well be the lack of supporting infrastructure and runaway success of Hyundai’s own battery electric vehicles that ultimately spells the beginning of the end for hydrogen cars. Or it might just be the start. The company is playing the long game and at this present time it’s anyone’s guess as to whether hydrogen will continue to survive or be overtaken by battery power. It might be the ‘right’ fuel, but it might have already missed the boat.