IF THIS CAR launched just over a decade ago we’d be asking Volkswagen why it has mistakenly put Polo badges on a Golf GTI. That’s because this ‘little’ GTI now puts out figures that would match a Mk V Golf with the same legendary moniker. Its turbocharged four-cylinder develops an identical 147kW but 40Nm more than its forebear. 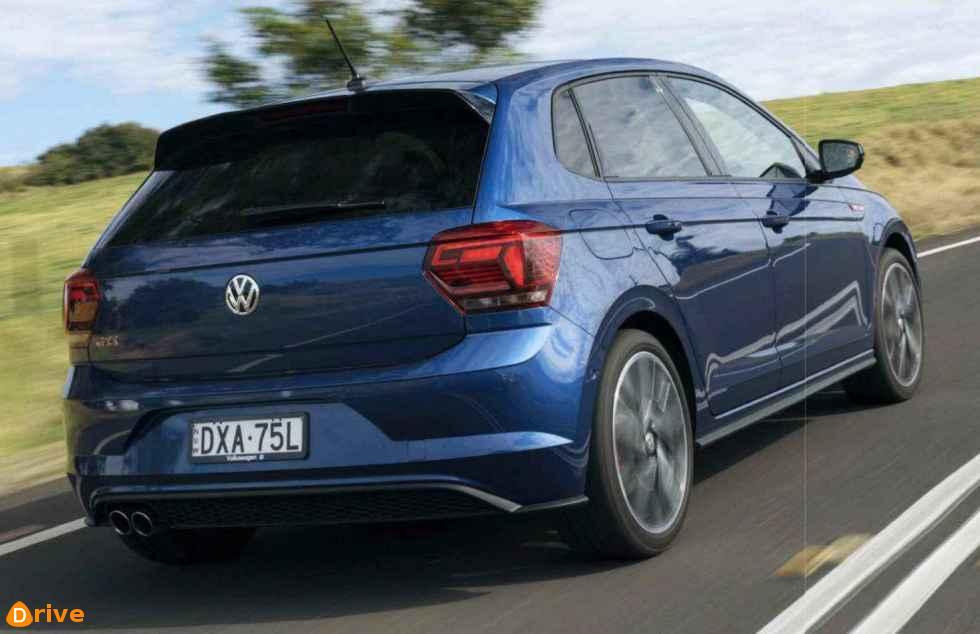 The outputs are pumped from the turbo 2.0-litre four-cylinder more commonly found in, as you might guess, a Golf GTI. When Renault Sport has shrunk the Megane’s engine to 1.8 litres, Ford has deleted a cylinder from the Fiesta ST, Wolfsburg’s decision to upsize from the turbo 1.8-litre seems as surprising as swapping in a V8.

But the power injection seems less dramatic when you run a measuring tape over the new Polo’s sharp lines and stretched surfaces. It’s grown in width by 49mm, wheelbase by 90mm, and length by 84mm. Given these increases unlock more interior space, VW compares the room inside to cars a whole segment larger.

In fact, engineers have broadened its performance envelope without diluting its small-car feel. A six-speed manual is available overseas, yet VW Oz believes buyers won’t crave it like the old one as the six-speed dual-clutch DSG variant now gets every one of the 320Nm that the manual does. That’s no bad thing. The DSG handles the car’s muscly outputs with ease.

It smoothly dispatches shifts mid-corner with its wheel-mounted paddles and matches wide ratios to the car’s thick power band. It also adds a blurt during upshifts to the Polo’s slightly anodyne growl. The turbo wastegate even sneezes out a choof, too. Admittedly, it lacks the true control of a manual ’box, as it upshifts at its 6000rpm redline no matter what mode you’re in and the kick-down switch is too easy to hit under full throttle.

It’s a bit lost on what gear to serve you at low speeds under part throttle in Drive, as well. Nor does it feel much faster than before. The new Polo GTI, despite gaining 15kW and 40Nm, hasn’t lowered its claimed 0-100km/h time. The EA888 is dialled down from the viciousness delivered in a Golf R,yet still starts pulling hard at 2750rpm and doesn’t relent until redline.

The speed delivered during the powerband’s linear climb up its rev range also makes light work of overtaking manoeuvres. And there’s plenty of grunt to overpower the front-axle from a standstill, traction control on or off. Surprisingly, this front-drive hooliganism disappears in the bends. The car’s brake-activated ‘LSD’ quells wheelspin with smooth, but noticeable, operation, to help it dig in under traction, rather than scrabble from corners.

With unique suspension geometry, links, and a stiffer setup for adaptive dampers, the Polo responds well when driven hard. That outside front tyre doesn’t relent as you barrel into decreasing radius turns. This poise improves the Polo’s spread of grip by tenaciously holding the road. Astonishingly, it does this with Michelin Primacy 3s, instead of Europe’s Pilot Sport 4s, and thinner tracks than the model before.

Combine this with a crisp steering rack that’s been injected with the same precision, and insulation, as the current Mk VII Golf GTI’s electric system, and the Polo emerges as truly confidence inspiring. And at least across terribly kept public roads, it backs its talents with an unflappable ride in both its Normal and Sport adaptive suspension modes. Its torsion beam-based MQB platform at first feels firm, fidgeting over most imperfections.

Press on, though, and the dampers always have some travel up their sleeves. The only thing we can tell you about the optional 18-inch wheels, with smaller 40-aspect ratio Bridgestone Turanza T001s, is they are a bit busier over really rotten roads. But unless you commute over multiple cattle grids then there is not much in it. Nor can we tell you if the brakes are up to retarding the extra energy the Polo throws around since we didn’t use a racetrack.

It’s also why we can’t comment on whether the Polo GTI can cut loose with its ESP switched to Sport. Despite the Polo’s innate friendliness and accessibility, the stability system remains undefeatable. At least on ride, handling, and comfort, the Polo GTI is more resolved. The new cabin drops the seat height to a lower level, for a better driving position, and feels roomier.

The amount of cost-saving plastic seems appropriate, the high resolution 8.0 inch touchscreen is nicely integrated into the centre stack, and the standard tartan-themed seats support you well. At $30,990, or $1000 more than the old DSG variant, it seems like a very reasonable ask. That value diminishes the pricier it gets, and that’s easly done with its options list adopting Audi’s package-focused mentality.

We find the standard fit Apple CarPlay system, adaptive dampers, and analogue dash more than acceptable. But if you’re particularly imageconscious, 18s and fake-suede seats comprise the pricey $3900 Luxury pack. The safety-minded will zero in on the radar cruise in the Driver Assistance package for $1400, while a crisp 300watt audio system, digital instruments and sat-nav await in the $1900 Sound and Vision pack.

Fully optioned this new Polo GTI can reach $38,190. While that’s not a first for the mini hot-hatch class, that’s more than the $37,990 Volkswagen Golf GTI Original three-door. It also breathes down the neck of the Hyundai i30 N, Renault Megane GT, or Ford Focus ST. Stick to the basics, we say, and the Polo GTI will be a blast. Even if on paper it’s a little bit like one from the past.