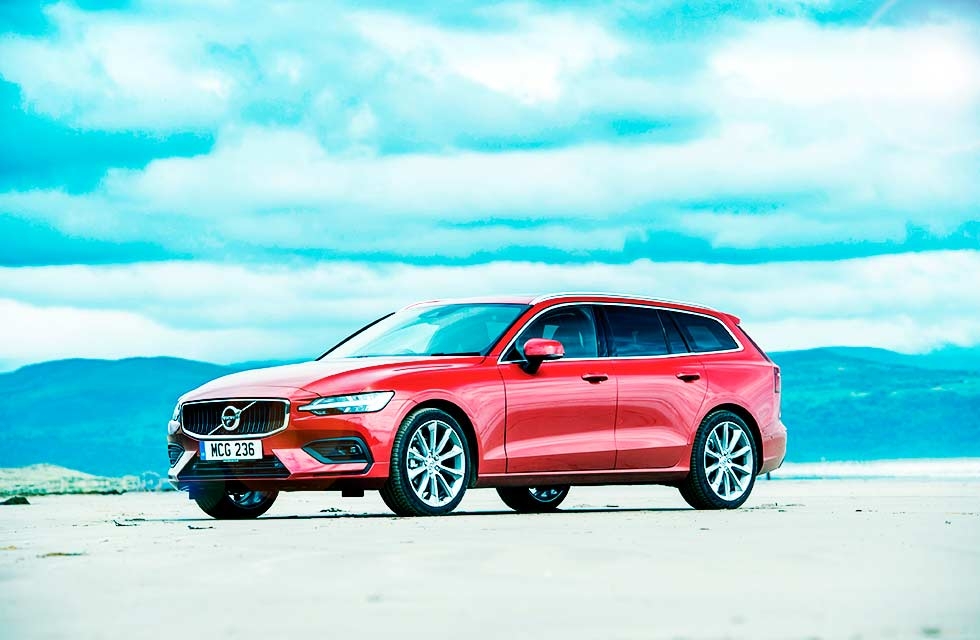 Volvo has long been known for its estate cars, one of the twin pillars of its early reputation, along with the strong emphasis on safety, long before that became such a focus across the motor industry. Early Volvo estates were solidly brick-like, and a far cry visually from the new V60. This is the eighteenth estate model in Volvo’s history, and by far the most handsome, with its sculpted muscular body lines. It is launched with a choice between two diesel engines, both 2.0-litre units, with power outputs of 148bhp (called D3) or 188bhp (D4). Plug-in hybrid versions of the V60 will join the range next year. Volvo has committed to phasing out diesel power in favour of electric and hybrid models, but it’s not happening just yet. Demand is strong here in Britain for both estates and diesel engines.

The driving experience is smooth and civilised. The V60 steers informatively and accurately, and has a good absorbent ride quality that doesn’t seem unduly fazed by a lumpy road surface. It feels nimble through the bends, and is impressively calm and level on a twisty route. You’re not really aware of having a long estate car cavern back there, and the cornering stance is nicely free of body roll.

On start-up you can detect the sound of a diesel engine up front, but the muted rumble settles quickly and the car is notable for its refinement. Noise is generally well suppressed. There is an eager feel to the way the car accelerates, with the D4’s 0-62 time a whisker below eight seconds, and the D3 two seconds slower. The six-speed manual gearbox has a decently slick action and the ratios are sensibly spaced. There is also an eight-speed automatic edition, which feels a bit prioritised to optimise economy, but makes for a more relaxing drive.

Volvo does beautiful cabin design really well, with a cool Scandinavian elegance, and the V60 is a good example of that. It has very well shaped and supportive seats, a general absence of clutter, distinctive air vents and one of the largest navigation and infotainment screens at over 12 inches, in a portrait fashion. Quality-wise it’s up there with the major German brands it aspires to challenge.

As you’d expect of a Volvo, safety is high on the agenda, and the V60 has a world-first feature in its automatic braking system that helps to avoid a potential collision with an oncoming vehicle. All versions have City Safety autonomous emergency braking that reacts to any pedestrians, cyclists or large animals straying into the car’s path. Standard kit across the range includes a powered tailgate, rear parking sensors, LED headlights, dual-zone climate control and Volvo’s On Call connected services to let you control various car functions via your mobile phone or smartwatch.

Volvo has done a very decent job of making the V60 a desirable estate car capable of wooing some buyers away from rival BMW, Audi and Mercedes-Benz. How many it can lure away from the tidal wave of SUVs that increasingly flood the roads is a tougher question, though.

“The V60 steers informatively and accurately, and has a good absorbent ride quality…”

Verdict Roomy, practical and well-mannered, the V60 is the best estate car yet produced by Volvo, the company renowned for them.