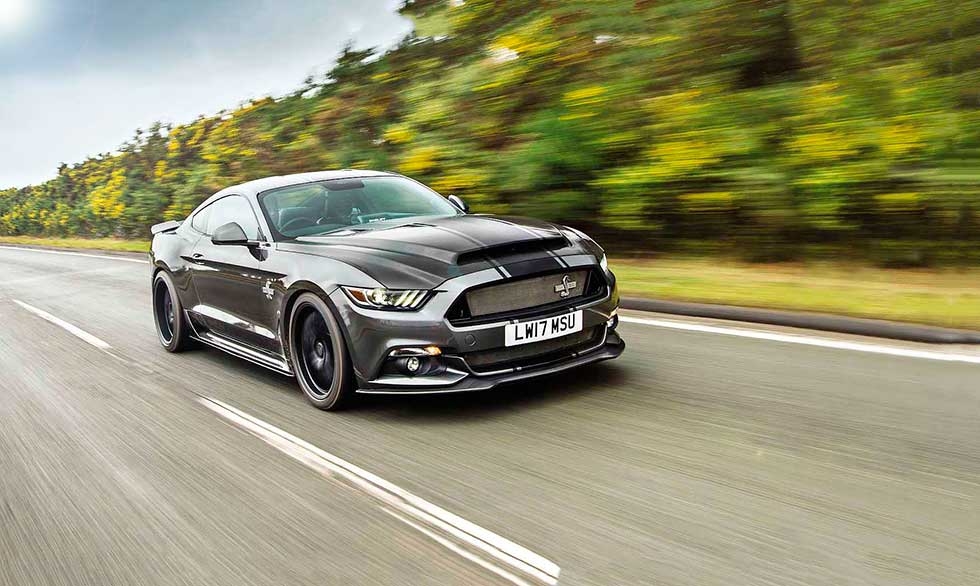 Shelby Mustang Super Snake. Yep, with 800bhp this supercharged monster can bite bad, yet it’s not all about horsepower. Text and photos by Will Beaumont.

Let’s be clear – 800bhp in a muscle car is an extremely silly idea. Especially if that car is being driven on UK roads. So if you’re going to almost double the power output of a Mustang, it’s best if the work is carried out by someone who knows what they’re doing. Someone like Shelby.

Carroll Shelby created his first fettled Mustang, the GT350, in 1965. Since then numerous high-performance variants have borne his name, and following his death in 2012, the firm he founded – Shelby American – has continued to build cars and develop new models worthy of that name. The scale of the business has grown significantly in recent years thanks to Shelby’s reputation as the company to tune V8 Fords and now there are franchises across the world.

The only official Shelby ‘mod shop’ in the UK, and one of only three in Europe, is Bill Shepherd Mustang. Thanks to Shepherd’s background in racing old Fords, Cobras and Mustangs, he got to know Carroll Shelby personally and his Surrey-based outfit was chosen as the US firm’s UK representitive.

Today Bill Shepherd Mustang can turn a brand-new Mustang, or convert your existing car, into a Shelby, complete with a Shelby VIN and an entry in the Shelby American World Registry. There are a couple of Shelby models that Bill Shepherd can build for you, the 670bhp GT or this, the 800bhp Super Snake. To turn a standard 5-litre V8 Mustang into a Super Snake, Shepherd adds a Whipple supercharger and upgrades the engine cooling to suit the increased output. A new exhaust system then helps bump peak power to a nice round 800bhp and torque to 640lb ft.

To match the engine’s performance a set of six-piston front and four-piston rear Wilwood calipers with ventilated discs replace the standard brakes, the rear driveshafts are swapped for Ford Racing items, and 20-inch forged wheels wearing Michelin Pilot Super Sport tyres are added. Thankfully, the Mustang’s rolly and robust chassis is given a thorough going over, too: the springs, dampers and anti-roll bars are all replaced with Shelby components and Shepherd puts the car through a thorough alignment session and adjusts caster and toe at all four corners.

There are also some lighter body parts that help offset the added weight of the supercharger, and these are joined by a few cosmetic changes. Together they include a new bonnet, spoiler, splitter, side skirts and diffuser, all in carbonfibre, plus Super Snakespecific grilles and stripes.

Inside there’s a trio of new dials on the top of the dash – for oil pressure, fuel pressure and boost pressure – plus Shelby embroidered headrests and floor mats. These additions hardly transform the Mustang’s cabin and certainly don’t make it feel like a £107,000 car inside – that’s the cost of a new Mustang plus £69,000 for the conversion, and a sum that could buy some pretty tasty alternatives.

The mechanical changes are far more obvious, right from the moment you start that V8. It is loud, and the idle is busy and offbeat, but unlike the traditional muscle-car burble, it’s crisper and more aggressive. That same harshness is then amplified as the revs increase and it sounds like there’s thunder hitting the back of the car. The cacophony from the exhaust pipes seems to attract attention for miles around, so may not be appreciated by your neighbours.

Some supercharged Mustangs with similarly massive power figures don’t feel as fit as the numbers they promise. However, the Super Snake’s engine feels good for every one of its 800bhp and on cold but dry winter tarmac the car struggles to find traction in the first four of its gears: it’s an unruly and wild thing. On the rare occasions when you manage to find enough grip to use more than half throttle, the car’s back end hunkers down and the rear axle twists and squirms, feeling like it’s trying to make a break for freedom. But rather than detaching itself, it instead fires the Super Snake forward like it’s a barely tamed Funny Car. Accordingly, every straight line feels like a drag strip and every set of traffic lights like a Christmas tree counting you down for a full-bore start. Of course, on the road you can’t really indulge those fantasies, but still the Super Snake has the exact effect that you’d want a highly tuned muscle car to have on you.

The only element of the powertrain that doesn’t quite live up to your expectations is the supercharger noise. Once you’ve gazed under the bonnet and seen the massive, polished compressor, you expect there to be an ever-present supercharger whine as its two screws bully and crush air into the engine’s cylinders, hypnotising you like you’re Mad Max staring into the ’charger atop ‘one of the last V8s’. And as the revs rise you want that whine to tear through the entire car. Yet sadly the muted sound of the supercharger is only ever really audible on the infrequent occasions when you can use full throttle.

Straight lines may be the Super Snake’s forte, but the Shelby upgrades allow it to shed some of the Mustang’s muscle car handling traits. The ride is undoubtedly firmer than the standard car’s, but there’s a sense that you’re riding on a lot of rubber, the wide tyres absorbing the harshest imperfections of the road beneath them.

Body roll is significantly reduced, but there’s still enough movement to help you judge how much grip there is to play with – which is essential, as the steering offers no help in this department. The Mustang’s size and weight is well hidden for the most part, but crests and big undulations highlight that the dampers can’t quite keep its full 1700kg-plus heft in check all of the time.

In standard form, the multi-link rear suspension adopted by the current Mustang does a very good job of simulating the lateral movement of the live axles of its predecessors. The work that Shepherd does to the Super Snake’s chassis – that full alignment and an appropriate ride-height change, rather than simply replacing the springs and dampers and leaving it at that – makes the car feel far more solid and grants you greater influence over the rear tyres.

If the Super Snake’s front does slip into understeer, which it can do even at reasonable road speeds, you now have the faculties and confidence to use the engine to get the rear end moving and neutralise the car. And because of the motor’s potency, only the lightest tickle of the throttle is ever needed.

While the Super Snake is far from a precision tool, its chassis does a good job of stopping it being completely incongruous on UK roads. Yet it’s still as unhinged and as outrageous as you’d want an 800bhp muscle car to be.

But because it’s a Shelby, and comes with that provenance, I can’t think of a more sensible way to create something as totally insane as this.

‘It struggles to find traction in the first four of its gears: it’s unruly and wild’

‘Because of the motor’s potency, only the lightest tickle of throttle is ever needed’

+  More power than you’ll ever need

–    More power than you’ll ever be able to use