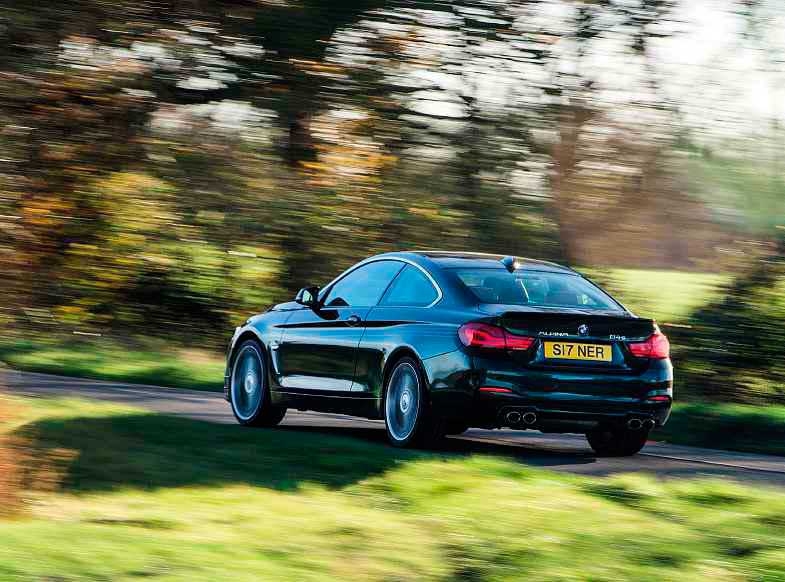 Alpina B4 S Biturbo. Now with more power and further honed suspension, Alpina’s 4-series is better than ever, yet it remains a different proposition to the BMW M4 F82. Photography by Aston Parrott. Text James Disdale.

The BMW 4-series has recently been treated to a bit of a midlife nip and tuck, so it’s no surprise to find that Alpina has followed suit with its B4. Yet while the main changes to the BMW donor car are largely cosmetic, Alpina has taken the opportunity to give its coupe a more thorough going over, so there’s now more power and some subtly tweaked suspension settings. Oh, and to make sure nobody confuses it with the old model, its name has gained an ‘S’.

The B4 S Birturbo starts life as a standard BMW 440i F32 before it’s shipped to Alpina’s Buchloe factory, where it’s effectively rebuilt from the ground up and emerges as a car with the performance to have an M4 breaking out in a cold sweat. The biggest change is reserved for the engine, which is based on BMW’s N55 twin-turbocharged 3-litre straight-six. This is no simple remap job either, as Alpina uses its own cast-aluminium block, a strengthened crankshaft and its own turbochargers – although it retains the sequential layout of a small blower for low-speed response and a larger one for higher revs. Also included is a bespoke inlet manifold, a larger intercooler and a totally revised cooling system, while an Akrapovic exhaust delivers better gas flow and an 8kg weight saving.

All in, these changes deliver 434bhp and a tarmac rippling 487lb ft of torque, which represent improvements of 30bhp and 45lb ft respectively over the outgoing car.

For reference, the M4 has 425bhp (444 in Competition Package trim) with 406lb ft. On the move the B4 S feels every bit as quick as its 0-62mph in 4.2sec and 190mph top speed claims would have you believe. Yet while its M-badged rival relishes hard work, the Alpina goes about its extremely rapid business in a more subtle way. A hefty 442lb ft is available from just 2000rpm, meaning you don’t have to stretch the six-pot to experience startling results; squeezing the throttle only a couple of centimetres is enough to pin you firmly into the B4’s hand-stitched leather seat.

You can chase the revs if you want – the unit will happily spin around to the 7000rpm red line – but the torque curve is so flat, and there’s so much performance at low and medium engine rotations, that it’s all too easy to surf the tidal wave of torque to make fast yet unfussed progress. That said, it’s worth pushing a little because the engine sounds great, the subtle baritone burble at idle replaced by a creamy-smooth and cultured howl as it’s extended towards its peak.

Gearchanges are handled by a heavily revised version of BMW’s eight-speed automatic transmission. It shifts ratios cleanly and smoothly when left to its own devices, and switching to Sport or Sport+ mode encourages it to hold on to gears for longer. You can also manage the changes yourself, although the usual tiny shift buttons on the back of the steering wheel spokes are a tad fiddly.

For the S the suspension gets springs with a 40 per cent stiffer rate, new anti-roll bars, bespoke bushes and recalibrated adaptive dampers. However, it’s not the increased agility or stronger body control that you notice first – although they are there – it’s the impressive ride. Despite Alpina’s trademark 20-inch wheels, the B4 S flows down the road with a rare suppleness. You can tauten things with the Sport modes, but it gets a bit fidgety and there’s no discernable increase in poise. Instead it’s best to leave the dampers to their own devices and revel in the Alpina’s ability to shrug off the worst of Britain’s scarred and torn tarmac. Factor in the strong grip, surprisingly good traction from the standard mechanical limited-slip differential and the progressive, powerful brakes, and it’s possible to make indecently rapid progress.

Of course, with so much torque your line through a corner can be altered with a simple prod of the throttle, but the breakaway characteristics are so smooth that there are very rarely any heart-in-mouth moments. So it’s a shame that the steering undermines Alpina’s good work: it’s surprisingly slow and lacks crucial feedback. There’s also less frontend bite than you get from an M4, meaning you can’t muscle the B4 along in quite the same manner – it prefers a slow-in, ridiculously-fast-out cornering method. Still, get into a rhythm with the B4 S and it proves to be a fast, agile and entertaining companion.

The rest of the car is pure Alpina, which means you get a gorgeously finished interior complete with blue-backed dials and lovely green and blue stitching for the steering wheel, while outside you’ll find the trademark chin spoiler and body graphics.

It’s a very likeable thing, the B4 S, even if it can’t match the ultimate sharpness of the best sporting coupes. Yet as an effortless GT with a surprisingly steely side when the mood takes, it’s up there with the Audi RS5. Factor in the Alpina’s rarity and handbuilt pedigree, and it’s hard not to be swayed by its charms.

Below: Alpina beautifully re-upholsters the 4-series’ interior in its own distinctive style; 3-litre straight-six is heavily re-engineered, with Alpina’s own aluminium block and brace of turbos, and a strengthened crank…

–   Steering is slow and lacks feel