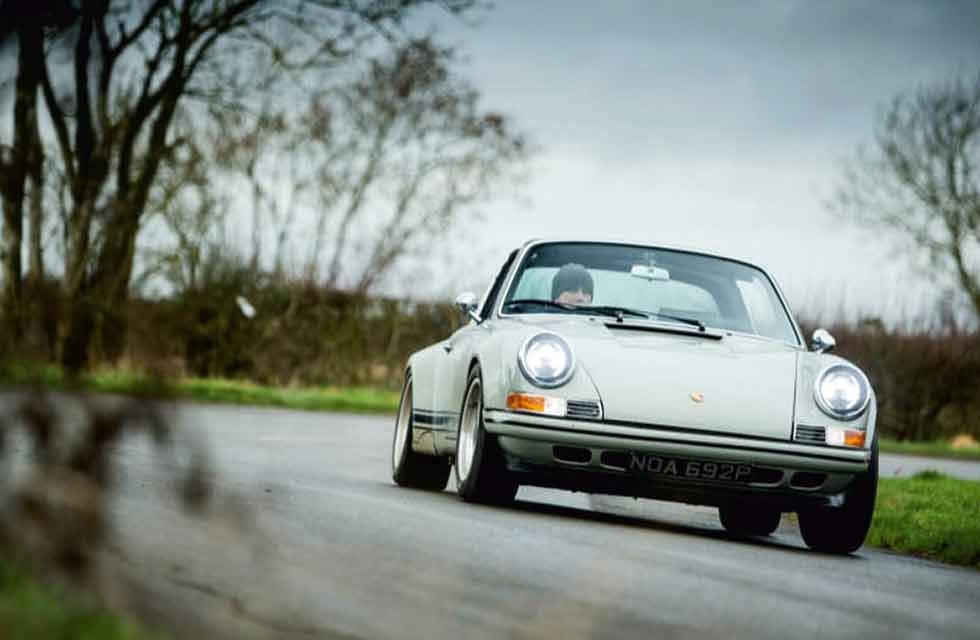 Winter shouldn’t stop you enjoying your 911, so we borrow a modified 911 Targa and head off for a big loop of Britain’s Cotswolds. Written by Kyle Fortune. Photography by Ali Cusick.

“Go for a drive,” said the Editor, not that I needed any encouragement to take a tour of the beautiful Cotswolds. It’s late January though, where darkness shrouds the early morning and returns again by the afternoon, the roads are filthy and, depending if there’s snow or ice expected, salty. It might not seem like the most sensible of ideas on paper, but since when has sensible been fun?

“The open top allows us to better enjoy the passing scenery”

I might be a Scotsman, but home’s Stratford-upon- Avon. Colloquially known as Shakespeare’s town, it’s slap bang in the middle of the country and, somewhat usefully for someone who tests cars and calls it work, rather well located for some fine driving roads. Equally useful is the location of the builders of bespoke-spec 911s, 911 Rennsport, situated just 18 miles from home. It’s close enough that last time I borrowed a car from them for these pages I cycled down. There’s no two-wheeled nonsense today though: it’s a bit too damp and cold, even if, it being January, there are a few turkey dinners that need shifting.

If you happen to be up near Moreton-in-Marsh then pop into 911 Rennsport. Located in a smart industrial area on the outskirts of this pretty Cotswolds market town, Rennsport is owned and run by Paul and Keith Cockell. You can’t miss it on the estate, their smart premises teasing with its second-floor window, within which you’ll spot all manner of interesting Porsche. Not just 911s either. There’s a Porsche tractor and a few transaxle cars, mixing it up with the other interesting exotic, as well as the Audi Cabriolet that was once owned by a certain Princess Diana no less.

The Cockells are a welcoming bunch, their workshops visible from the upstairs viewing area where you can see all manner of builds and restorations being undertaken. One of their cars is outside, and Paul is kind enough to give us the keys. It’s just been built for a customer and is based on a late galvanised shell, running a 3.2 Carrera engine and G50 transmission. To that there are wider steel arches, the running gear a Rennsport-derived set-up that uses a fully uprated 930 torsion bar set up with anti-roll bars, with short anti-squat RSR aluminium rear trailing arms and 930 brakes.

It’s finished in Fashion grey, the colour working well with the contrasting graphics and the chrome trim, as well as the brushed-metal finish on the Targa’s roll-over hoop. Paul’s insistent that we take the roof off and, as we’ve packed hats, who are we to argue? After all, Britain is evidently benefitting from a rather mild start to 2019. Being local I know the roads around here rather well, Cusick having to tune out the drone from my mutterings about passing where I take my kids swimming, or pointing out where the in-laws live. There’s the rushing of the wind passing by to help here, the rather pleasing sound from the stainless-steel exhaust another distraction, the Targa proving to be rather well suited to this winter drive.

We’ve a few destinations in mind, key among them being the A422 linking Stratford-upon-Avon with Banbury, it running all the way to Silverstone and beyond. We’ll not be going as far as that today, but it’s a bit of a hidden gem. Just a short hop off the M40 if you’re coming from the north or south, it’s punctuated by pretty villages. We’re heading straight there from Moreton, the drive up taking some of the Fosse Way, which is essentially the Roman’s idea of a motorway. It’s a fast road, but the interesting ones are those off it, it spearing across the A422 just outside Ettington before continuing north.

We take a right through Pillerton Priors, the next section of road after the village being a chassis engineer’s dream… or nightmare. I know this because it’s part of Jaguar Land Rover and Aston Martin’s chassis development route. Drive here and more often than not you’ll see a partially disguised car or mule out doing testing, the thought being if the suspension can cope with the roads around here, then it should work well anywhere.

The undulations here are incredible – not the road itself, though for a mile or so it does see some rolling crests and drops – but the tarmac’s unique topography itself. It’s one of the most interesting pieces of road I’ve ever driven. I know the surface so well I could tell you exactly where I am on the road if I were blindfolded, it so challenging to the suspension that when Porsche lent us the keys to a GT2 RS for the day prior to official launch, this is exactly where I headed to see just how sophisticated its suspension control was.

The Targa copes admirably here, though I’ll admit that the speeds in it are a little bit slower than they were in the GT2 RS, being mindful that Rennsport has a customer in waiting for this very car. We keep following the A422 where the long, well-sighted, sweeping road is briefly punctuated by Sun Rising Hill, as good an approximation of an alpine hairpin as you’ll get in this part of the world. It’s a 16 per cent gradient, a test for any car, it wide and sighted enough to be enjoyed responsibly. Cresting that you’ve a number of options: stop at Upton House for a National Trust fix, or head back via Rately and through Kineton, where if you want a sports car fix with a British twist, pop into McGurks, an Aston Martin specialist. From there you can loop back to rejoin the A422 in the opposite direction back through Ettington, as we did en route to lunch.

If you’ve even a modicum of petrol addiction flowing through your veins you’ll have heard of Caffeine and Machine. Once a quiet country pub that nobody visited, the vision of owner Phil McGovern has seen it become a hub of automotive curiosity, a haven for the mechanically afflicted and engine addicted. There’s fine coffee or, if you’re done with driving, beers. The food is excellent too, the surroundings a mix of art and engineering conceived on any number of mediums. The car park meanwhile always has something of interest to cater for every automotive perversion, be it bikes, Beetles, hot rods, customs, super, sports, stanced, modern and old cars. More often than not McGovern’s 912 or 993 RS make up some of the interesting machinery parked outside, or, like the beautiful 356 today, parked by the fireplace. Grabbing a bite there is an unusual indulgence for Cusick and I. Lunch on a drive or shoot more often than not results in some petrol station-sourced terribleness, though not today. It also makes for a great opportunity to admire the Targa, looking good through the window as we enjoy our pitstop before heading off to explore some more.

We head back towards Moreton-in-Marsh via a non-prescribed route, taking spurs off when the mood takes us, heading through familiar tourist draws like Chipping Norton, Broadway and Stow-on-the-Wold, each busier than the next, denying Cusick his desired clean Cotswold image with the typical yellow-stone buildings in the background.

We hit pay dirt for that in one of the many small villages we pass through on our photographic meandering. The buildings here are picture postcard pretty, thatch and hedges trimmed to perfection, the Rennsport Targa looking just right in such a setting, its open top allowing us to better enjoy the passing scenery at the same time.

While it’s warm for January there’s still a fair bit of filth on the road, the decision to leave the Targa dirty for the photographs one as much described by convenience and authenticity as it is to prevent our digits perishing by having to undertake icy roadside washes before Cusick gets his lighting rigs out. Even with the roof off it’s warm enough inside, though the temptation to increase the pace a bit is quickly dampened when it’s apparent doing so pulls all the heater’s efforts out into the Cotswolds rather than warming us.

With the weather closing and no roof we call it a day, the light fading too, and we’d rather keep the neat hand-weaved lamb’s leather seats from getting wet. Cockell’s decent enough to let us off with returning the Targa with a layer of winter grime on it, leaving cleaning it to someone with a decent pressure washer and a detailing bay.

There’s real fun to be had driving without a plan, and the Cotswolds is the perfect environment to do exactly that. It’s a bit of a hidden jewel right in the heart of the Midlands. Just don’t tell everyone we told you so. We don’t want it getting too busy, especially with summer not so far away now…

The Targa is a divisive model among the 911 fraternity – you either admire them, or you don’t. However, the Rennsport Evolution Targa RSR here managed to weave its way into our affections during our drive through the Cotswolds.

Paul Cockell explains that it’s built from a fully galvanised, late-G50 shell, into which a 3.2-litre Carrera engine and G50 five-speed transmission are fitted. It’s the suspension that’s most interesting though, it largely 930 Turbo based, housed under steel-formed widened arches. The brakes, too, are borrowed from the 930.

The effect of that is noticeable: the brakes are strong, the handling sure-footed and traction excellent, even with 225/50/R16 Pirelli P7s having to deal with roads greasy with cold winter grime. The steering is similarly reassuring, turning in quickly, though I’d change the steering wheel – not least because the wood and metal finish is cold to the touch with the roof open in January. It’ll be with its new owner after it’s been washed, and so a big thanks to them for letting us enjoy it as it should be on some hugely enjoyable roads.

RIGHT Kyle explores his own ‘Targa Warwickshire’ loop in the steelarched RSR Targa backdate. ABOVE 911 Rennsport’s Targa RSR makes use of 930-spec suspension, a popular choice among G-series cars. ABOVE The 911 Targa got its name from Porsche’s exploits on Sicily’s Targa Florio. A classic edition of the race takes place every October. BELOW Fashion grey: an interpretation of Porsche’s own Crayon hue seen on 991 and 992s? ABOVE Long bonnet, brushed roll bar and chrome brightwork add to the Targa RSR’s backdate flavor.