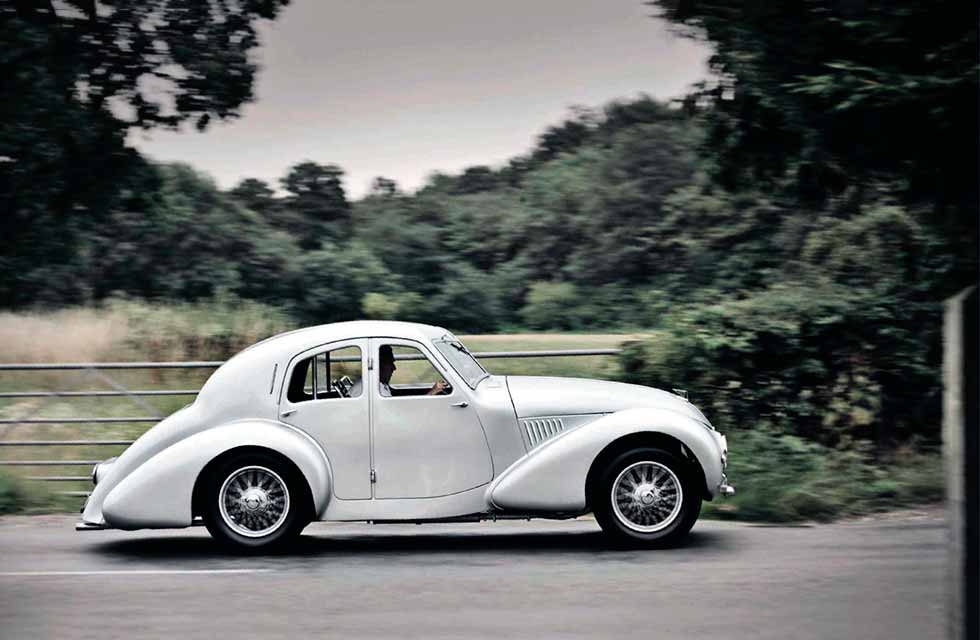 Physical Presence. In Aston’s 100th year, we celebrate its ’30s scientific breakthrough. The futuristic Atom is one of the most significant cars in the history of Aston Martin, yet it is rarely seen in public. Octane drives it. Words Martin Van Der Zeeuw. Photography Simon Clay.

It’s hard to believe that this is an Aston Martin. Streamlined bodywork aside, it doesn’t scream ‘sports car’, and its stocky appearance doesn’t exactly set the pulse racing. It’s almost like a creature from outer space. You tend to tiptoe around the car cautiously lest you’re caught in a tractor beam and transported to a distant, alien planet.

There is a strangely triangular theme to it, too. That starts with the grille and bonnet, of course, but look at it long enough and you’ll see more and more triangular shapes; sometimes they are even subliminal. There is not a single right-angle in the design.

My initial impressions were shared by the general public when the car was unveiled in 1939, shortly before the outbreak of World War Two. Few cars as overtly modernist as this had ever been seen before, and as for the name… Five years later, the world would be all too familiar with the atom, but in the late 1930s nuclear physics was very much the preserve of an intellectual elite.

Gordon Sutherland, at that time boss of Aston Martin, belonged to that elite. He understood social change, and philosophised about the future of the car market. People would start making longer journeys, he was sure. The rapid development of air and rail travel was certain to continue, with services such as the Orient Express and Le Train Bleu giving a hint of what was to come.

So Sutherland planned to bring to market a comfortable saloon with a sporty character, in line with Aston Martin’s philosophy. It needed a streamlined shape, similar to the more innovative Bugattis and Bentleys of the time, and in 1939 he began work on his prototype, which he named after something incredibly small, incredibly fast and incredibly powerful.

Small is the operative word. You may not notice straight away, but the rear doors are almost ridiculously diminutive. They make climbing into or out of the back seats something of an adventure. One theory is that Sutherland wanted to drive the car at Le Mans, where the regulations insisted upon four doors; another is that the reason was a shortage of materials. A third is that Sutherland simply constructed the car around his own proportions.

The Aston boss watched his development team closely, constantly peering over the shoulder of chief designer Claude Hill. The concept owed much to the cars of continental Europe: Sutherland admired European technology. He had personally owned 90 cars, many of them European, and was determined to combine their best features in his prototype. The body is aluminium over a tubular steel frame, and originally housed a front-mounted 1950cc four-cylinder single overhead-camshaft engine with two Zenith carburettors. Power is transmitted to the rear wheels via a four-speed Cotal electromagnetic semi-automatic gearbox and Salisbury hypoid bevel back axle; the independent front suspension is to Sutherland’s own patented design.

‘David Brown was sure of its potential. After taking it for a drive, he made a historic decision and bought the company’

The interior speaks of Sutherland’s fascination with aircraft, sporting aeroplane- type hammock seats – during the early stages of development it was fitted with speed sensors borrowed from a plane. Sutherland had followed the first tests of the delta wing in Germany in the early 1930s, hence perhaps his fascination with triangular design themes; the hood ornament, which doubles as the bonnet release, was specially designed for the Atom in the shape of a delta wing. Side-on, it’s the Aston Martin logo cut in half.

Sutherland did not wrap his creation in cotton wool. Even though it was a one-off – later to be labelled one of the first fully functional concept cars – it was still an experimental car, and clocked up around 150,000km during and immediately after the war. In 1941 it was entered into the Chessington Rally, a race organised by a few wealthy businessmen to keep morale high at a time when racing was not exactly top priority. Petrol was rationed but the ultra-modern Atom represented the promise of better times.

Although the war kept him from taking the Atom to production, Sutherland confidently presented his car to the automotive press, and it was well-received. In 1941 The Autocar wrote: ‘The saloon body breaks with British car convention as universally understood in 1939… see it as the comfortable, convenient sports-type car of the future.’ Motor Sport, in 1942, said: ‘On the road this is a machine which convinces you it is all the way a winner.’ The same year, Laurence Pomeroy of The Motor claimed boldly: ‘In this car, we can see the new order of motoring before our eyes.’

It is said that those who suffer with back problems are miraculously cured after a long journey in the bucket seats of the Atom, and as I am no stranger to lower back pain, I climb into the driver’s seat with a mixture of curiosity and scepticism. The seat is not too hard, and fairly supportive. We can thank the aircraft inspiration for that.

The engine emits a growl at odds with the car’s appearance, but it sounds promising. There’s a large lever protruding from the floor, used to select forward or reverse, while switching between gears is accomplished with a smaller stick on the adjustable steering column. First is right and fourth is left, but the Cotal semi-automatic transmission doesn’t take much getting used to, and saves you the trouble of double-declutching. The gearbox was really too heavy for the four-cylinder engine, but hey… it was an experimental car.

The original engine was replaced in 1944 by a slightly stronger 1970cc four-cylinder with two SU carburettors, developed by Claude Hill and which it still retains. Sutherland’s log shows that in addition to replacing the divided rear window and extending the wheelbase, he planned to fit an overdrive unit. He was probably aware of the fact that the Atom was still slightly underpowered.

And so it remains. Its 82bhp output is quite insufficient for a car that, despite its aluminium skin, weighs 1200kg. The Atom is only as fast as a normal saloon of the period, managing 0-60mph in a very pedestrian 19 seconds. So forget ‘sports’. And Le Mans, for that matter.

Even so, on country roads the car feels eager and agile, and it tries gamely on the straights. The Aston Martin Atom cannot be called a GT in a practical sense, but as a concept it definitely is. Whatever you may think about the Atom, Sutherland’s successor David Brown (he took over Aston Martin in 1946) was sure enough of its potential. Shortly after taking it for a drive, he made a historic decision.

After the war, the company had found itself in financial difficulty and was offered for sale in a small classified advertisement taken in The Times: ‘For sale: sports car company.’ Brown was surprised and delighted when he discovered its identity and paid a visit to the factory, where he met Gordon Sutherland and was handed the keys to the Atom.

He said later: ‘I tried the car and found it had very good road handling but was very much underpowered. Nevertheless, I thought it would be fun to have and play around with, so I bought Aston Martin myself for £20,000. That was a lot of money in those days and for it I got the prototype, a few rusty old machine tools and the services of the Atom’s designer, Claude Hill, who was very good.’ It is quite something that the Atom persuaded Brown to fork out not just for the car but for the entire business – particularly when you consider that the Atom ran out of petrol during the test drive.

Its chassis and engine configuration were adopted by Brown for the first model to emerge under his leadership: a racer that claimed victory in the 1948 24 Hours of Spa and formed the basis of the DB1. By ‘1948 the Atom was outdated and in ‘1949 the car was sold, changing hands a number of times. One of WO Bentley’s godsons once owned it and rumour has it that during his military service he drove it backwards in fourth gear on the parade grounds. The Cotal gearbox made this technically possible.

During the 1980s the Atom was kept in the motor museum at Le Mans, from where it moved to the Musee de l’Automobile in Chatellerault, remaining there for two years before being returned to England by the current owner, Aston Martin enthusiast Dr Tom Rollason, in July 1985. Amazingly, Rollason bought the car sight unseen: he was in hospital when he placed his bid and had to wait two months to see what he’d bought.

With the help of Gordon Sutherland (who passed away in 2004, aged 96) he then began a research and restoration project that would last ten years. The car was blue when he recovered it from France, but he discovered that it had also been painted red, grey, silver and black at various times. After deliberation, he decided to restore the car to its 1946 finish of silver.

Rollason’s eye for detail is obviously superb, and when the car arrived in the UK he was immediately suspicious that its headlights were not original. The bolt holes in the chassis were the giveaway, and he soon reinstalled the correct lamps, which are mounted to the chassis with brackets behind the one-piece nose, rather than within it. The Atom was also the first Aston to use self-tapping screws, and Rollason spent two years searching for the correct period replacements – only to lose points at a concours because the jury mistakenly assumed them to be modem.

Opinions on the attractiveness of the car vary widely, but what is certain is that the unique Atom (and contrary to what some may think, there is only one) is one of the most important cars in Aston Martin’s history. It was advanced for its time and, remarkably, did not look out of place when it appeared at the recent unveiling of the four-door Rapide Coupe. Some even claim that the ‘squashed triangle’ shape of the modem Aston Martin grille can be attributed to the Atom.

Since the car was put back on the road in 1995 it has won several awards, including Best in Show at last year’s Classic Motor Show in Birmingham, where the competition was exceptionally strong. Yet the Atom sometimes remains hidden from the public eye for years at a time. The amiable Tom Rollason, who considers himself the custodian of the car rather than its owner, has stated that he prefers it to retain an air of exclusivity, so you won’t see it at just any old event.

Which strikes me as entirely proper – some things ought to be reserved for the elite.