Lexus – it’s a bit of an odd one. For the best part of three decades it has been turning out sybaritic saloons and heart rate-lowering hybrids that are beautifully built but as entertaining as chartered accountancy exams. Yet every now and again Lexus takes leave of its senses and rolls out cars such as the M3-rivalling IS F, the unhinged LFA, the LC and this, the GS F, which has been treated to a mid-life refresh.

The changes are very modest and in a line-up you’d struggle to pick out the latest GS F from its predecessor. The updates have been made under the skin, where you’ll now find adaptive dampers, or Adaptive Variable Suspension in Lexus speak. This set-up delivers up to 30 levels of damping force across four pre-set modes (Eco, Normal, Sport and Sport+) to provide greater suspension compliance for the daily drive, but tauter responses when you’re hustling. 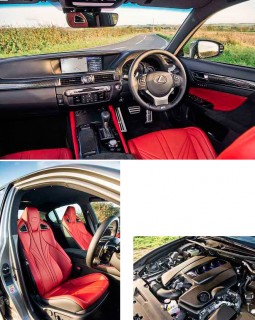 The rest of the GS F remains largely the same, which means it bucks the current supersaloon trend for downsized turbocharged engines, four-wheel drive and twin-clutch gearboxes. The Lexus’s combination of big-capacity naturally aspirated V8, rear-wheel drive and torque-converter auto is refreshingly old school. It’s an impression that’s reinforced once you’re on the move.

In an age of instant turbocharged torque, the GS F’s 5-litre takes a little getting used to.

Its headline figures of 471bhp and 391lb ft seem weak-kneed against the German opposition, particularly when you consider the latter figure peaks from 4800rpm, while the claimed 4.7sec 0-62mph time seems lazy when a Mercedes-AMG E63 S dusts the benchmark sprint in under four seconds.

Yet while the Lexus lacks the outright performance of direct rivals, accessing what it does have is a satisfying experience. There’s no instant whizz-bang shove in the first millimetre of throttle travel, instead you have to work hard for your rewards because the 32-valve quad-cam unit doesn’t really get into its stride until around 4500rpm, at which point it pulls with real vigour. It sounds the part too, with the ever-so subtle burble at idle transitioning to a glorious metallic howl as the rev counter homes in on its heady 7100rpm peak.

Top: red leather is an option, you may be pleased to learn; infotainment system is fiddly and frustrating. Above: who needs turbos when you’ve got a big capacity V8?

What of those suspension changes? The first thing you notice is the improvement in comfort. Gone is the stiff-legged low-speed ride that marred the old car and instead you’re treated to plusher, more supple progress over bumps. There’s still some firmness there, but it’s now easier to live with on the daily grind. Twist the Drive Mode Select controller on the transmission tunnel to Sport or Sport+ and you can feel the Lexus tensing up as the dampers prime themselves for some spirited driving. The steering is still quick and accurate but bereft of feel, yet once you discover that there’s plenty of front-end bite, the Lexus covers ground at a prodigious rate. Yes it’s big, and quick direction changes betray the hefty 1790kg kerb weight, but most of the time the GS F is planted and poised, with strong body control.

Delve further into the driver modes and you can tweak the torque-vectoring differential with Standard, Slalom or Track settings. The middle of the three aims to boost agility by delivering more torque to the outside wheel to help drive the nose toward the apex of a corner. Neat in theory, but it feels contrived and artificial in practice. Better to stick to Standard or Track, slacken off the stability control and revel in the chassis’ balance.

Again, that magnificent engine plays its part here, with the natural throttle response allowing you to alter the car’s trajectory through a corner at will. The GS F is big, so you’ll need plenty of space if you really want to play the hooligan, but it’s just as satisfying trimming your line by mere millimetres using the combination of throttle and quick steering. 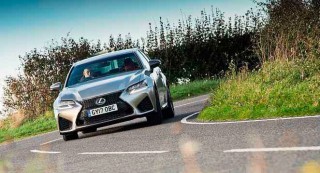 Elsewhere, the Lexus remains brilliant and baffling in equal measure. Though understated, it looks muscular and purposeful, it’s beautifully built and the interior is roomy and well equipped. But its thirst for fuel is alarming and the eight-speed auto feels slow-witted compared with the best twin-clutch units. Yet even these flaws fail to take the shine off the characterful, quirky and engaging GS F. It’s not the fastest or most technically accomplished supersaloon, but it’s a car that gets under your skin and makes a fine alternative to the default choices.