Bentley is taking the Continental GT to the track in 2018

Ok, I’ll come clean. I wasn’t the biggest fan of the original Continental GT of 2003, the first all-new car Bentley produced under VW ownership. I thought it was too big, heavy and clumsy to be considered a proper sporting GT. And it was neither smooth nor comfortable enough to be a genuine luxury car. A good first effort, but far from a world-beater. Over the years the Conti got much better, benefitting from several minor tweaks along the way and one major revamp in 2011. Yet it remained fundamentally the same car launched near the start of the millennium, so basically a Volkswagen with lots of nice bits attached. Now, though, the Continental GT has been completely re-engineered to the point where it’s claimed to be all brand new. It certainly looks very different to before, and this pre-production example – which Bentley says is 99 per cent finished – drives very differently, too. 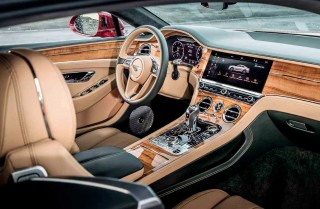 The big news is that the GT shares its underpinnings not with a humble VW Phaeton but with the Porsche Panamera. And rather than having to work with hand-me- down parts from the VW empire, Bentley’s engineers were involved from day one with Porsche during the platform’s development, so could dictate exactly what they were going to end up with. And that, explains Bentley’s director of chassis engineering, Keith Sharp, has made a massive difference to the end product.

‘It’s fair to say that we [Porsche and Bentley engineers] worked together on the project right from the word go, at the beginning of the concept stage,’ says Sharp. ‘And that’s made a big difference all the way down the line. It basically means we got what we wanted, not merely what was available.’ Which is why Sharp and his team are so confident in the way the new GT drives, even if it does still weigh considerably more than two tons. ‘The car is 76kg lighter than before,’ counters Sharp. ‘But now that we can control everything it does so much more precisely – control its dynamic behaviour – the fact that it weighs what it does doesn’t really matter. Because as you’ll see when you drive it on the track especially, the level of control we’ve managed to instil in the car is in a completely different league from the last model.’

Above: the GT’s highly sculpted aluminium body panels are created by heating the metal to 500 degrees Celsius and using high pressure air to shape them. Left: opulent cabin blends traditional craftsmanship with the latest ‘connected’ tech and touchscreens: it’s a truly special place. 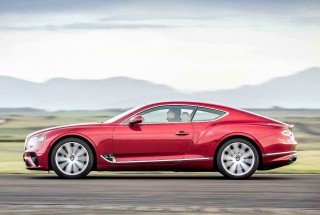 Power still comes from a 6-litre twin-turbo W12 (a V8 will follow, after a hybrid), but the familiar capacity belies the fact that the unit is all-new. Even the firing order is different from the old W12’s, because Bentley found that by altering it, and tuning the exhaust valving amongst many other aspects, it could make the engine smoother yet more sporting in feel. And more powerful and economical at the same time. The dual-clutch gearbox to which it’s mated is new too, being essentially Bentley’s interpretation of the Panamera’s eight-speed dual-clutch transmission. The outputs are impressive. Maximum power is 626bhp at 6000rpm, while maximum torque is 664lb ft, developed between 1350rpm and 4500rpm. These peaks are increases of 59bhp and 148lb ft respectively over the outgoing car, and coupled to a launch-control system are sufficient to fire the 2169kg GT to 62mph in a faintly ridiculous 3.7sec, then on to a top speed of 207mph. The combined fuel consumption figure of 23.2mpg doesn’t seem that horrendous, all things considered; nor does the 278g/km emissions output. Although, as we know, the real-world results can differ somewhat from the lab tests…

The new chassis and suspension are where things really get interesting, though, and represent the biggest departure in philosophy from the original GT. For a start the engine is set around 150mm further back in the chassis, which makes a huge difference to the car’s fundamental balance. At the front there are double wishbones, at the rear a multi-link arrangement, but at both ends there is a threechamber air suspension system teamed with active anti-roll bars, aka Bentley Dynamic Ride. 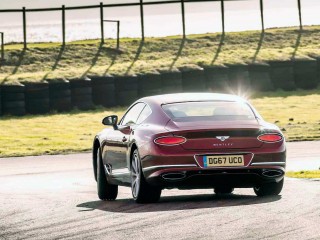 It’s these elements, claims Sharp, that provide the most important increase in control. The brakes are the biggest fitted to any production road car to date, with 420mm cast-iron ventilated discs at the front (up from 405mm, and matching the size of the optional carbon-ceramics on the old car) and 380mm items at the back (up from 335mm). The GT remains four-wheel drive – and needs to be with that much torque available from such low revs. But the way in which the power and torque are deployed has been radically enhanced, and varies as you switch between the three different drive modes.

In Comfort mode up to 38 per cent of torque can reach the front axle (the Conti is essentially rear-wheel drive, only shifting drive to the front when it detects slip). At the same time the maps for the dampers, throttle and gearbox all settle into their most relaxed settings, and the exhaust into its least intrusive, and as such the GT goes properly into waft mode, essentially feeling like a cosseting four-wheel-drive limo. Interestingly, the steering remains the same across all modes, unless you go deep into the menus and select Custom mode, in which you can alter everything to your own tastes.

One up from Comfort is ‘Bentley’ mode. It’s the one the engineers at Crewe believe allows the Conti to give its best on the road. It’s a touch more sporting everywhere than in Comfort, yet retains a sizeable dose of soothing, Bentley-like refinement.

There is a delicious, deep-rooted sense of serenity about the way the GT glides across the landscape of our Welsh test route in Bentley mode. It purrs. It floats across uneven ground with a genuine feeling of majesty.

And it’s also quiet, whisperingly so if you sit back and really think about it. And then you realise the cabin quality is quite exquisite. It feels more like a million-dollar car inside than one that costs in the region of £160k. The craftsmanship of everything you see and touch and even smell is second to none. An Aston Martin DB11 has a nice enough cabin, but compared with the Conti GT’s it seems almost pauper spec.

‘You can harness the weight of the car to put it in places on the circuit, at subtle angles, that benefit the lap time’

‘It somehow manages to disguise its vast weight to a point where, if you were guessing, you might think it weighed 500kg less’

On the road in Bentley mode the GT feels properly sorted. It somehow manages to disguise its vast weight so well that, if you were guessing, you might think it weighed only 1700kg or so, not nearly 500kg more. That’s how crisp its responses are, how nimble it feels, despite the silly numbers on the scales. 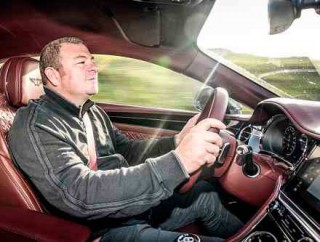 And blimey does it feel blisteringly quick in a straight line. The way it summons its energy with such effortless efficiency and simply propels you towards the horizon – as if you’ve been released from a giant bungee cord at the very extreme of its tension – reminds me of the first time I drove a Bugatti Veyron. The sense of acceleration is total, yet the sense of control – as if everything is going to be just fine, despite the fact you appear to be travelling at Mach 2 much of the time – is also all-encompassing. Combined with a gearbox that picks off ratios as quickly and calmly as a pickpocket plundering his victims all the way along Oxford Street, it makes the GT a deeply impressive car to drive, or simply be driven in. But it’s not until you select Sport mode and drive it on a track that you can fully appreciate how far Bentley has gone with the new GT. Its abilities are way beyond anything you might expect of it; so far beyond the previous version of the car that you’d have a job to associate one with the other.

In Sport mode a maximum of only 17 per cent of drive goes to the front axle, and all the various dynamic systems, including the electronic air suspension, are set to deliver maximum sporting thrills, especially the exhaust and throttle maps. Now the new GT feels, well, not quite like a full-blown sports car, but at the very least you could describe it as an extremely sporting GT car.

And if you turn the ESC and traction control systems off, as Bentley insisted I did at Anglesey Circuit, it will do things and reach angles of slide that a previous GT owner would never, ever believe possible. And it’ll slither around with complete and rather beautiful control – you can actually harness the weight of the car to put it in places on the circuit, at subtle angles, that benefit the lap time. That’s how adjustable and fundamentally well behaved the new GT is when you take it by the scruff of the neck and throw it around.

Yet at the other end of the scale the Continental GT is more comfortable and more refined on the road than ever before, and its cabin is oh-so opulent. And while looks will be forever a subjective topic, I happen to think that the new styling represents a huge leap forward in allure.

Quite a car is the new Bentley Continental GT. And for around £156,000, you could even consider it something of a bargain.

– Thirst, but then at this level, who cares?