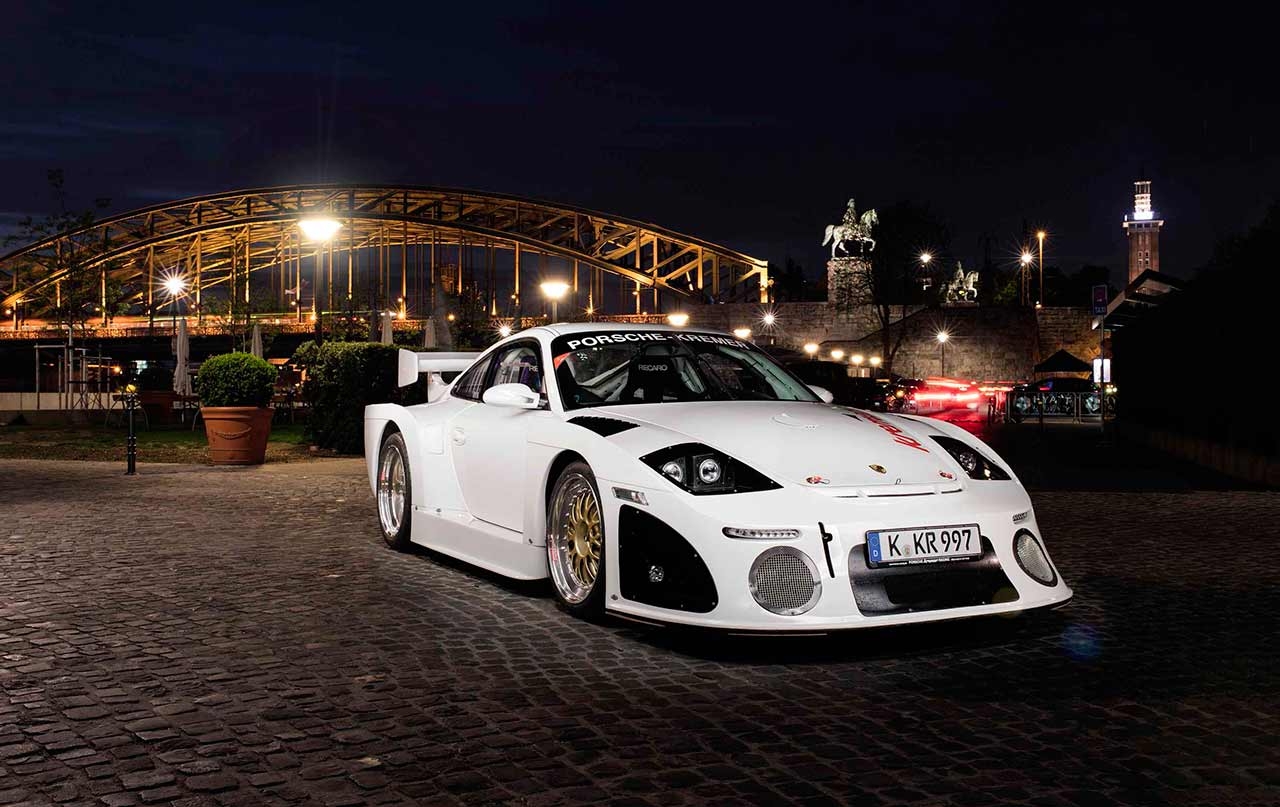 It looks out of place amid the crowd it has attracted by the River Rhine in Cologne. This city is where Manfred and Erwin Kremer started tuning and racing Porsches in 1962, winning Le Mans in 1979 with their 911 K3 ‘flatnose’ – the only flatnose 911 ever to score outright victory there, a feat not even the factory could replicate. Kremer became the specialist to beat in that wild turbo era, with its home-developed K1 through to the K4, the latter a 911-shaped aluminium spaceframe brute wielding at least 635bhp and as much as 810bhp.

Erwin Kremer’s death in 2006 heralded a difficult period for the racing team, which spiralled down to becoming ‘just another workshop working on old Porsches’. In 2010, Cologne businessman and Kremer enthusiast Eberhard Baunach bought the company. ‘We were specialising in air-cooled Porsches, which gave us little potential for developing the business. It was always my ambition to do something with the Kremer heritage.’

That ‘something’ had not long ago materialised in front of us at the Kremer Racing workshop on the outskirts of Cologne. It is jawdropping. The modern K3 is alive, and even better news is that you can drive it on the street… if you are mad enough. ‘We call it the 997 K3 R, with R standing for road,’ smiles Baunach. The numberplates on this car look like a mistake, but no: the TÜV office has granted this monster approval for road use. They are a special kind of crazy, these Germans.

The car we have in front of us is actually number 002, number 001 being used strictly as a racing car in the VLN races on the old Nürburgring. ‘We were working on different ideas around the K-series. But as soon as I saw the sketches for a modern K3, I just knew: this is the one we have to do.’ It was the start of a story that is distinctly reminiscent of the old Kremer tradition, relying very much upon in-house expertise.

The modern K3 is developed as a bodykit around a 997-generation Porsche 911 Turbo. ‘We think of it as a car for horsepower junkies who consider 480bhp to be on the low side. As well as the bodykit, we will offer a total engine rebuild, replacing the turbos and fitting other new parts in the engine.

We will be able to offer anything between 700bhp and 850bhp reliably. More? Sure, it would be possible, but not reliable. Kremer has always been successful because we opted for reliable solutions, such as air-to-air intercooling for the turbos instead of water-to- air, which caused the Porsche factory team some problems in their time.’

Baunach often references the past, and he’s proud of his links to the original Kremer outfit. ‘I am so happy we worked with Holger Zimmerman from Zimspeed in building the kit,’ he says. ‘Holger is the son of Ekkehard Zimmerman, who developed the original K3 at Kremer.’

The bodykit is made of carbon-reinforced plastics, bringing a hungry look that no present-day 911 can muster. Next to this, the new GT3 looks, well, tame. But there are differences between old and new. At the front, Kremer was forced to leave the headlights in their original positions thanks to homologation rules. In the original K3, which was only ever a race car, the headlights were placed low in the front bumper, where now we find circular intakes instead. But Kremer gave the xenon headlights a new plastic cover. ‘We tried different designs, including a round version as well. In the end, the square headlights looked best.’

What hasn’t been mentioned so far is that the car you see here is not merely a 911 Turbo. Look at the details and you might recognise the plastic windows with louvres and an aperture for ventilation, or the centrelock wheels. Yes, this is actually a 997 GT3 Cup car, which Kremer happened to have languishing in the workshop. Porsche has road homologation for the GT3 Cup racer in Germany, which suited Kremer’s plans. ‘The real development will be around the 911 Turbo, which will be more usable in traffic. It also has a nose-lift system, which comes in handy in town,’ explains Baunach.

‘The car you see now already uses the daytime LED running lights of the 911 Turbo, a TÜV requirement. And if you look closely, you will see in the rear wheelarches the cut-out we need to direct cooling air towards the turbochargers. At the back, we still have to put on the definitive tail lights. What you see now is not the final design.’

What we love most about this K3 R is the rear spoiler, a genuine replica of the 1970s spoiler on the original K3. ‘Again, we tested out different shapes,’ says Baunach. ‘But this one fits the regulations that are used in Group H for the VLN races. They also specify a maximum car width of 2 metres, which is the same that was allowed for the Group 5 races the K3 took part in. So our car is now just as wide as the original K3.’

It also opens up new opportunities for Kremer. ‘As you can see, you can put the H3 R-kit on a 997 GT3 Cup as well. So anyone with one of those standing around can give it new life. It can run in Group H in the VLN races, and we are trying to negotiate an entry in the Nürburgring 24 Hours for 2018.’

Perhaps surprisingly, that is actually the cheaper of the available options. An old GT3 Cup can be yours for around £50,000 or €60,000; a decent 997 Turbo is more like £85,000 (€100,000). ‘Sure, you can find cheaper Turbos. But we will have to replace many components, so you might as well go for a decent car,’ says Baunach. Add to that the €200,000 (around £170,000) for the conversion and bodykit – glued or bolted into place, as you prefer – and you are looking at a bill that is just as impressive as the car itself. In the end, it is your appetite for horsepower that will define the final figure.

‘I would be very happy with annual production of 11 or 12 cars. Finishing one car a month would be a realistic ambition for us. This year, I hope we can sell three.’

It shows a careful approach to business. ‘We have the workshop working on clients’ cars, we have the racing, and now I hope we can let Kremer grow further with the K3 R,’ says Baunach, over the table at Café 477, the hangout for Kremer’s fanbase. Here they will even dish up a Kremer sandwich for you. The Kremer legacy is very much alive, and news of the company’s plans has been greeted with enthusiasm, and hours of smartphone footage.   But enough of lunch. It’s time for a drive.

Let us remember that this Cup car is not quite what Kremer has in mind for most of the K3 Rs it will build. ‘It will be much easier to drive in Turbo form. You can bring us a manual or even a double-clutch PDK. But please, no Tiptronic automatic gearbox. Not that it doesn’t physically fit, it’s just that it doesn’t fit with the character of the car.’

Actually, I am not sure whether I would prefer a standard Turbo over this GT3 Cup version. The whole racing ethos is a perfect match. Push-button to start, flappy paddles to change gears. A racing clutch with very little tolerance of clumsy driving… Difficult it may be, but it is a genuinely unique experience to pilot this racebred machine through town. Naturally it is a traffic stopper, with its racing exhaust and automatic blips on downshift that make for a spectacular approach to the city centre. The six-point harness and the bucket seats, the low seating position, the whine of the transmission… it all makes you believe you are ready to race – only, for now, the upshifts are not performed at full bore. No, you dip the clutch, listen to the loud thunk of the gearbox and then gently feed in the power. Once the K3 R is on the move it dishes up a surprisingly comfortable ride, though it’s worth steering clear of any potholes.

This monster is beguiling, and so much more exclusive than any 911 Turbo. It is proof that, here in Cologne, there are still people who can look at a Weissach product and think: maybe we can improve things. And that’s the kind of spirit we like.

‘THE TÜV OFFICE HAS GRANTED THIS MONSTER APPROVAL FOR ROAD USE. THEY ARE A SPECIAL KIND OF CRAZY, THESE GERMANS’