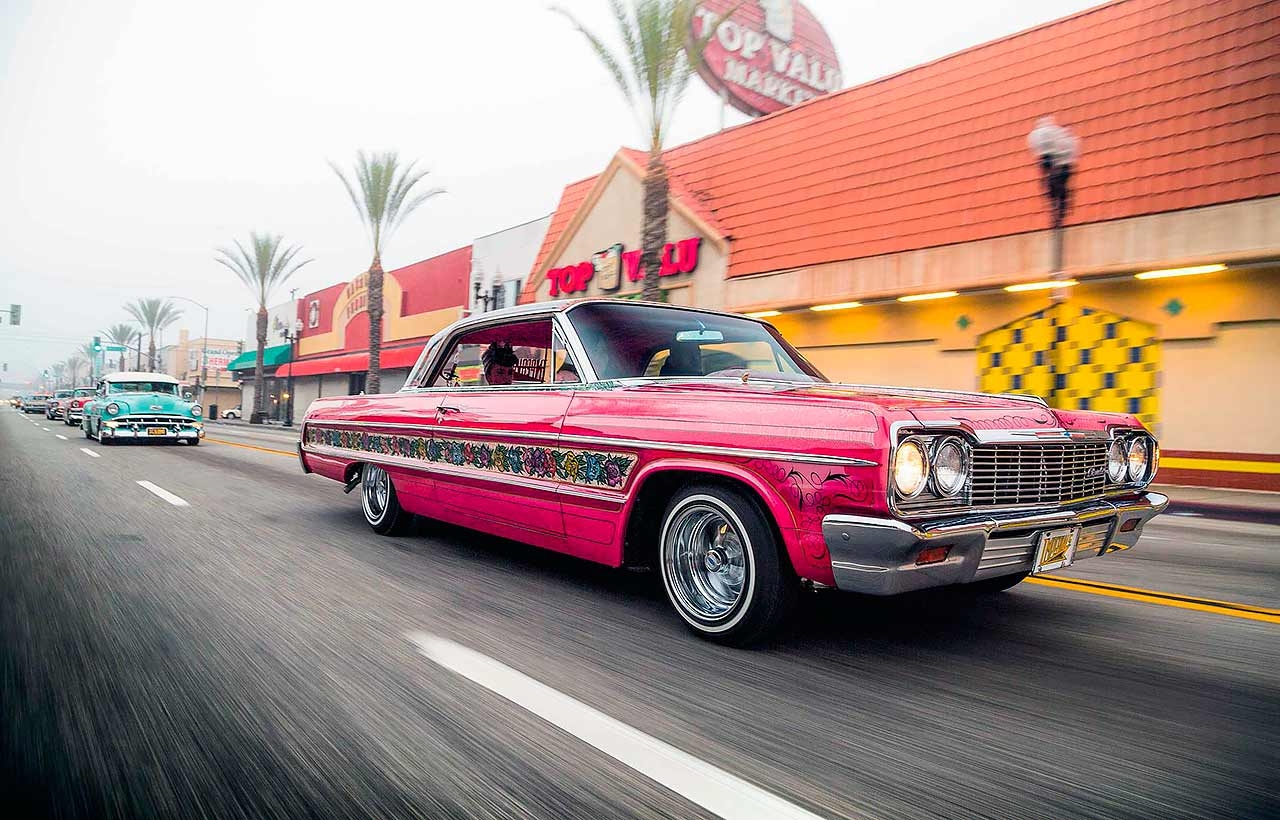 Low Riding is fundamentally an Hispanic movement and automotive lifestyle that likely grew out of the original ‘lead sled’ and ‘dreamboat custom’ car movements in America during the 1950s. The Barris brothers, Dean Jeffries, Gene Winfield and those other early ‘Kings of Kustoms’ were not Latin, but they set the tone for ground-scraping customs that were chopped, channelled, painted, chromed, lowered, shaved, frenched, and polished to within a millimetre of their lives during that post-war decade.

The modern Low Rider phenomenon came a little later, much more a product of the 1960s and ’70s, born in Whittier, Pico Rivera and other primarily Latino East Los Angeles area suburbs, although Caucasian and African American offshoots have since sprouted. ‘Low rider don’t use no gas now. The low rider don’t drive too fast.’

Many misunderstand and under-appreciate Low Riding, as it is so much more than an automotive style. It is, to say the least, a culture, and for many it’s a lifestyle. Most old-school, old-time Low Riders will tell you it’s ‘about cars, yes, but family, friends, car clubs, being together, art, style, music, food, and passion’. The cars run from mild (some) to wild (many) in terms of artistically flamboyant customising, with miles-deep metalflake ‘candy’ paintjobs, elaborate pinstriping, lettering, illustrations, ‘fade and shade’ effects, and the like.

Engines, wheels, trim, and nearly anything you can remove from a car and dip into a tank are usually chrome-plated. What is not chrome tends to be gold. In the days before computer-controlled hydraulic suspensions, cars were lowered the old-fashioned ways: by channelling bodies down over frames, by ‘heating and sagging’ springs, or simply by removing spring coils or leaves. Aftermarket custom or wire wheels are a must, usually wrapped in skinny whitewall tyres. Speed and handling are of no meaningful concern. If an engine wears multiple carburettors, it’s merely for style, but you can count on plated air-cleaner housings, valve covers and bracketry.

Success often has many fathers, but the undisputed padre major of Low Riding is the late Jesse Valadez (1946-2011), and his definitive expression of Low Riding essence and perfection is named Gypsy Rose.

Undisputed? Just check out the photography. The name was inspired by the equally definitive female burlesque entertainer and actress Gypsy Rose Lee, as well as the car’s primarily pink/ rose-coloured paint scheme. Valadez was a quietly intense, hard-working family man who was completely crazy about customising cars, and, with a small group of friends, unknowingly defined the Latin Low Rider style and ethos.

Over time there were three Gypsy Roses, the first two being ’1963-model Chevrolets, and finally the ultimate and current Gypsy, a ’1964 – all Impalas, of course. Although it wasn’t long before Low Riders began building their cars strictly for show – ‘trailer babies’, as many call them – Valadez and his friends used their cars as everyday, weekend, and family transport, cruising Whittier Boulevard and other East LA haunts with their pals.

Their missions were pure, strictly to enjoy their cars, as friends trolling around town on warm spring and summer evenings. Make no mistake, these groups were not and are not to be confused with drug culture or crime gangs. Although there were undoubtedly a few bad apples here and there, Low Riding is about cars, family, fraternity, and what everyone now calls ‘just hanging out’. Valadez’s club is called The Imperials, still active today in Los Angeles.

Gypsy Rose’s bodywork is far from radical; the top hasn’t been chopped or chopped off, and the panels are real Chevy steel. Gypsy is a ‘hardtop’ body-style with no centre-post, the most popular low-riding style, because with the windows all lowered it made the cabin airy and cool. As you can see from these photos, Gypsy’s primary colour theme is a rich, metallic, deeply pink ‘dusty rose’ hue, with a variety of handpainted, mostly floral-inspired graphics down the side and on the roof and horizontal panels. Valadez and his friends built this car and many others by hand at home from the ground (not very far) up. The chrome glimmers so brilliantly it can surely be seen from space.

The car has been shown running a variety of wheels over time, but its original and seminal look is riding on show-chromed Cragar SS fivespoke wheels; still called ‘mags’ even though they are made of steel, not magnesium. Like the outside theme, the interior is all rosy pink, trimmed in velour, with a small chandelier and cocktail bar inside. Chevrolets are the baseline brand choice for Low Riders – although various Buicks, Cadillacs and certain Lincoln models are popular – and the most iconic are like Valadez’s ’64 Impala, the ones with long, clean lines and huge, flat body panels, particularly hoods, trunk lids and roofs, that act as canvasses for the painter’s art.

Words and photos barely describe the artistry, presence and immaculate finish of Gypsy Rose until you see her in the metal. She’s been dubbed the Mona Lisa of Low Riders. Even dissenters admit she embodies undeniable personality and design harmony, and it’s easy to see how and why she defined the culture. She remains virtually as built, and has lived a somewhat pampered later life as the world’s most famous Low Rider, although she’s since gained the aforementioned hydraulic suspension to raise her ride height up for movement, minimal driving and transport, or drop her right down to the ground on her frame rails, for show or low-and-slow cruising.

Low Rider magazine, the printed voice for the movement, dubbed her ‘the most famous custom car in the world’ – a bold statement that could be as true of other seminal customs such as the Bob Hirohata 1951 Mercury lead sled or the original Batmobile. World’s most famous Low Rider? Without question.

Gypsy has enjoyed many great moments in the California sun, including countless photo spreads and magazine covers – along with a brief cameo in the theme song and opening credits roll for popular American television series Chico and the Man, starring the late Freddy Prinz. And, most recently, Gypsy has earned a new and particularly high honour and distinction in its 2017 induction into the Historic Vehicle Association’s (HVA) National Historic Vehicle Register.

HVA has developed the National Historic Vehicle Register to document carefully and accurately the world’s most historically significant automobiles, motorcycles, trucks and commercial vehicles. In March 2013, the HVA entered into a collaboration with the US Department of the Interior to explore how vehicles important in American and automotive history could be documented and recognised.

This documentation is more than the mere snapping of a few photos; one element of induction requires the vehicle to spend considerable time at HVA’s highly sophisticated lab facility, being extensively photographed, DNA sampled for originality, and fully scanned and digitised. This project is the first of its type to create a permanent archive of significant historic automobiles within the Library of Congress.

The more celebratory aspect of this process is that each car inducted is honoured with a display at the National Mall in Washington, DC, in a large, lit glass case, visible to the world at no cost to visit – lots and lots of selfies are taken here. The cars sit minutes away from the Smithsonian Institute Museums, and are in sight of DC’s iconic reflecting pool, and the Washington Monument.

Other famous vehicles in the Register include the first Shelby Cobra Daytona Coupe, the Marmon Wasp racer (winner of the first Indianapolis 500 in 1911), the prototype of the original Tucker 48, the first and original Meyers Manx dune buggy, a military Jeep, and a Mercedes-Benz 300SL Gullwing coupé, so Gypsy Rose keeps exalted company. Only a handful of vehicles are added to the Register each year, so in time it will become the ultimate historic recognition and preservation of the world’s greatest and most significant cars.

Thousands of Low Riders (cars and people) visited Gypsy Rose on the National Mall in April 2017, to see (some for the first time), honour and remember this groundbreaking machine and its much beloved and deeply missed owner and creator. Both the car and the memory of Jesse Valadez have certainly come a long way from Whittier Boulevard.

Jesse Valadez passed away in 2011, at the age of 65; his family, Imperials car club mates and the Low Rider community put on a grand funeral procession for him. His coffin was, of course, hand-painted to match his legendary car, in a variety of pinks, draped in pink and red (Gypsy) roses. His family still and will forever own this car. Jesse Valadez rode in style, and he went out in style too.

THANKS TO the HVA, www.historicvehicle.org.

‘GYPSY HAS ENJOYED MANY GREAT MOMENTS IN THE CALIFORNIA SUN, INCLUDING COUNTLESS PHOTO SPREADS AND MAGAZINE COVERS’

‘GYPSY ROSE’S BODYWORK IS FAR FROM RADICAL; THE TOP HASN’T BEEN CHOPPED OR CHOPPED OFF, AND THE PANELS ARE REAL CHEVY STEEL’

Above and top This is no ordinary 1964 Chevrolet Impala. Its status as the icon of Low Rider culture secured its inclusion in the HVA hall of fame. Both pages Deep, buttoned pink velvet adorns every interior surface, while the body panels earned the epithet ‘the Mona Lisa of Low Riders’. Lots of chrome and in-the-weeds stance are archetypes of Low Rider culture.