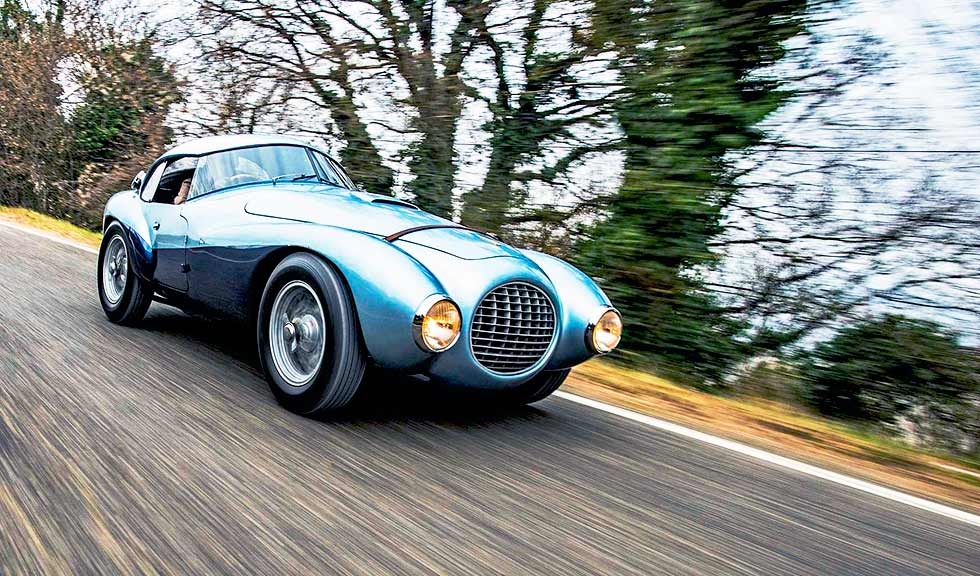 The EGG Factor Ferrari 166 MM ‘UOVO’. Driving a unique and prescient 1950 racer. The Marzotto brothers rebodied their 1950 Ferrari 166 MM in such radical style that it presaged racing car practice by a decade. Massimo Delbò delves into the history of l’Uovo. Photography Rémi Dargegen.

STRANGEST EVER FERRARI Cracking-on in the egg-shaped 1950 ‘Uovo’

In 1950 Italy was recovering from World War Two and, to many, the hardest years seemed over. With characteristic spirit, Italians saw a future full of opportunities. The economic flywheel was spinning again, and young entrepreneurs, such as Enzo Ferrari with his fledgling company, knew the market was ready to buy their products – even more so if they could stimulate the fantasies of their potential customers.

And there were hyper-wealthy people ready to spend money on the life that would soon become known as La Dolce Vita. Racing was the dream of every young speed merchant, and the Marzotto brothers were among them. The Marzotto family controlled a textile empire going back more than a century, and they wielded more than simply economic power: they were the unofficial kings of their vast land.

Enzo Ferrari knew that very well, and also that ‘gentleman drivers’ of this sort were the lifeblood of his company. As it happened, of the four Marzottos (each of them a Ferrari customer), Giannino and Umberto were talented drivers, as fast as some of Enzo’s own. Their ambition would also go way beyond that of Enzo’s other early customers.

Giannino Marzotto and Enzo Ferrari met in 1948, when Giannino was a 20-year-old looking for a 2.0-litre GT car. He became the owner of what is believed to be the fourth car built by the Maranello firm, and this may explain why Enzo Ferrari, who was anything but an easy man to handle, allowed the young Marzottos a freedom not often granted to others. Between them, the Marzottos owned around 20 Ferraris in a very short period of time and they loved to juggle with number plates and registration documents, which creates a headache for today’s historians when trying to trace the history of every car they owned.

The car was invoiced as 166 MM/50 and delivered on 13 February to Umberto Marzotto at the Scuderia Marzotto in Valdagno, Italy. Its debut on 2 April in the Targa Florio, as car number 445, was not as successful as had been hoped for: a clutch problem called a halt to proceedings. So the car was sent back to Maranello and repaired straightaway – just in time for the Mille Miglia, which started on 23 April. As number 650, it was driven by Umberto Marzotto and Franco Cristaldi – and crashed heavily in Peschiera del Garda. So heavily, in fact, that it split in two.

A few months elapsed before invoice number 231/50, dated 21 July 1950, was issued by Ferrari and detailed the cost for repairs to the chassis – or, more likely, total replacement, certainly a better solution considering the condition of the car after the crash. It was still in the Maranello workshop in August, when electrical work was carried out. And, crucially, it was still missing a body – so the Marzottos decided to use what was left of their car to create something absolutely unconventional.

Giannino, winner of the 1950 Mille Miglia in his Ferrari 195 S, was convinced that the Ferrari’s aerodynamics and weight could be improved, but Enzo’s reaction to his suggestion was not what he wanted. So Giannino asked Franco Reggiani, a trained artist and industrial designer, to create a body that would fulfil his wishes, one that opened a window into the future of racing cars. The results were astonishing: not only was the new body, manufactured by Carrozzeria Fontana, absolutely unique, but it was more than 100kg lighter than a Carrozzeria Touring open car, itself considered the benchmark of its type.

The car was finished in March 1951 and its radical ovoid shape earned it the epithet Uovo – Italian for ‘egg’. It had no A-pillars, the windscreen instead being supported by steel cables. Every effort was made to save each possible gram, though the finish was less than perfect, with evident asymmetry in the front ’screen area and around the bonnet-mounted air intake – not a big issue for a prototype created for racing rather than as a show car.

Before the end of that month the car made a visit to Maranello, where it was shown to Enzo Ferrari, who seemed unusually keen to accept this transformation of one of his own creations. On 1 April it returned to racing, in the Giro di Sicilia with Giannino Marzotto at the helm, as car number 435, but it was again forced to retire, this time because of a broken pinion – though it had been leading by two minutes over Piero Taruffi’s Ferrari 212 M, and showed excellent potential.

The body panels, handmade in Paraluman, were still unpainted, while the front grille had been manufactured by Fontana/Reggiani at the very last minute because Ferrari did not supply the requested lower-profile radiator. Marzotto reported after the race that the tail did not cover enough of the rear wheels, and that it would be modified, and that two air intakes would be opened in the roof to improve ventilation.

At the end of the month the car was in Brescia for the start of the 1951 Mille Miglia: by then it had been painted in dual-tone colours, rode on Pirelli 5.90 x 15in tyres, was fitted with a new front grille and featured louvres in the rear Plexiglass. The car performed very well until just before Pescara, when again it had to retire – this time because of those new tyres.

Subsequently a bubble – ironically, known as an ‘egg’ – was discovered on the right rear. L’Uovo went back to Ferrari in May 1951, where its engine was replaced with number 0086E, equipped with three carburettors, and racing success finally followed. In June, Giannino Marzotto and Marco Crosara won the Coppa di Toscana, and Marzotto finished second at the Circuito Internacional do Porto.

In July the car was back again at Maranello to receive engine number 0012 I, before going back to racing in events that included, among others, the 1952 Mille Miglia and the 12 Hours of Pescara with different drivers, though the results there were both DNFs.

During the winter months early in 1953 the car returned again to Maranello, where the engine was completely overhauled, and in April it was supposed to compete in the Mille Miglia. However, at the very last minute, Ferrari gave Giannino Marzotto a 4.1-litre works car – in which he won the race, his second victory, despite handing the lead early on to Juan Manuel Fangio after missing an oil change, and two subsequent minor accidents.

L’Uovo’s European career was over. In October 1953 the car was shipped to Mexico, most likely to take part in the Carrera, though it was instead sold on by a trader to Ignacio Lozano, from Newport Beach, California. Lozano was the publisher of the Spanishlanguage magazine La Opinion in Los Angeles, and would compete in the 1954 season, including the Pebble Beach race.

Later that same year the car was back in Maranello for a general overhaul and, just after, sold without its engine to the American Dave Andrews who, in November 1956, installed the 212 Inter engine (number 0107 ES) from the Stabilimenti Farina Coupé shown at the 1951 Turin motor show. And during the 1970s and 1980s, L’Uovo passed through the hands of several owners, undergoing restoration, before being entered in the 1986 Mille Miglia retrospective. Two years later, it finally went back into Italian ownership.

It’s certainly a well-travelled car, and all this history weighs heavily on my shoulders when Augustin Sebatié-Garat of RM Sotheby’s, which will offer the car for sale at its Monterey auction in August, hands me the key.

The car looks compact, more so than it does in pictures, and it’s more attractive in the metal too. When I clamber in, I find that its cockpit is more spacious than expected, but the real pleasure comes in discovering all the welding marks and the scars that reveal the history of the car, such as the air intake on the roof and modifications required over the years by drivers in different races.

Ignition on, button pressed, and a fantastic roar envelopes the cockpit that, with its naked alloy panelling, acts as a perfect sounding board. While the engine warms up a little, I check the pedals: the clutch feel surprisingly soft and, as I start to move, the impression is confirmed: the smoothness of the clutch and gearbox is among is the best of any Ferrari I have ever experienced. The engine revs quickly and easily, and the more throttle you apply, the happier it seems, singing melodically and changing to a deeper tone above 4000rpm.

The brakes are a little erratic, which is typical of many cars from this period, but some adjustment could well improve them and, after a few miles, I relax a little and begin to appreciate how well the car responds to the driver’s inputs. Lightness is the key: the car reacts like a Ferrari ten years its junior, although, of course, the driving experience is intensely physical. The steering wheel needs two hands and your arms have to work; concentration is required and you soon realise that, whatever you do, you have to act without hesitation.

Goodness knows how Marzotto could have endured 1000 miles at the wheel because the heat, under that Plexiglass dome, means my shirt is soon sticking to me, and I wonder whether the double-breasted jacket famously sported by Giannino while racing could ever have been worn again.

Yet the car behaves in exemplary fashion, maintaining its cool in the face of some heavy traffic, while the engine remains tractable at low speeds despite its designated intention of being driven flat-out.

All too soon it’s time to head back, so I take the long route as much as possible, just to prolong the pleasure of driving. When I switch off, the sudden silence is broken only by the clicks of cooling metal. Driving this car is an addictive experience, and I reluctantly return the key, thinking that if I could afford to buy this machine, I’d keep it as is.

L’Uovo is not a perfectly restored show car; it wears its history proudly. I’d get behind the wheel as often as I could. If the new owner ever needs a co-driver, I’m ready and waiting.

THANKS TO RM Sotheby’s, www.rmsothebys.com. The Uovo will be offered at its Monterey Week sale.

‘The car reacts like a Ferrari ten years its junior though, of course, the driving experience is intensely physical’

‘It’s certainly a well-travelled car, and all this history weighs heavily on my shoulders when I’m handed the key’

Below Giannino Marzotto takes the flag in the 166 MM ‘Uovo’ at the 1951 Coppa della Toscana.