Fans of BMW’s iconic M5 should be used to change by now. The first two generations – the E28 and E34 – were powered by six-cylinder engines, but then BMW moved to a V8 for the E39, in 1999. Perhaps more radically still, the E60 M5 of 2005 housed a 5.0-litre V10 engine under its bonnet. Nonetheless, high-revving, natural aspiration linked these four cars together, as did traditional, real-wheel-drive.

Purists weren’t best pleased when BMW M replaced the sonorous (if far from troublefree) V10 with a twin-turbocharged V8 for the F10 model, six years later, and now there’s more to grumble about; the brand new M5, due for launch at the end of 2017, will send its power to all four wheels. But wait one second. Even if you’re a diehard enthusiast of rear-drive BMW M cars, it’s worth reading to the end here, instead of storming off and dismissing the new G30 model as little more than a lightly-modified BMW M550i xDrive. I promise you, this new car has some interesting tricks up its sleeve! 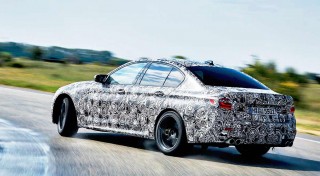 Let’s start with that xDrive system, shall we? In the M5, unsurprisingly, it’s called M xDrive, but it’s more than just a badge, as it’s a completely different set-up to that used elsewhere in the new 5 Series line-up. For a start, the rear axle features the tried and tested (and further improved) Active M Differential, which can distribute up to 100% of the torque it receives to either of the rear wheels, depending on conditions.

In the middle, divvying up the engine output (‘about 600hp’ is quoted, from a lightly upgraded, twin-turbocharged 4.4-litre V8) between the front and rear – in an infinitely variable split, up to 100% to either end if needs be), is a transfer case with an electromechanically-activated, multi-plate clutch. Up front there’s an open differential. Elsewhere, there’s the usual three-mode DSC, and the new M5 ditches the previous car’s dual-clutch auto for an update of the eight-speed torque converter transmission.

Just as important as all that impressive hardware, is the control and integration of it, and this is where BMW M reckons it’s made up the most ground, by grouping control of the driving systems in a new control unit, programmed in-house. It operates on a ‘feed-forward’ strategy, meaning the torque split between axles and wheels is varied to meet the current demands and driving mode, rather than utilising a fixed split. And those modes are key to the new M5’s appeal. 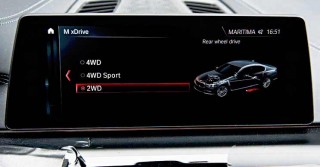 By default, the new car runs in 4WD mode, though, as this is an M car, you’ll be pleased to note that, at normal speeds, it still feels much like any rear-driven 5 Series. Push harder and you can detect power being directed to the front wheels on the exit of a corner, for a largely neutral stance. You have to be pretty ham-fisted with your steering inputs to make it understeer, even in the wet.

Press the DSC button once and M Dynamic Mode is selected, while the xDrive system is switched into 4WD Sport mode. This strategy sends more of the engine’s output rearwards more of the time and really is brilliantly judged, allowing satisfying yet safe rear-end slip for confident road drivers to exploit the M5 to the full. Nonetheless, the new M5 is at its most impressive when you hold down that DSC button for longer, to turn it off. This then allows the driver to select 4WD, 4WD Sport or 2WD – yes, that’s rear-wheel drive!

We had the opportunity to experiment with all this on a fast and damp test track, in dry conditions, and finally, on a soaking wet handling circuit. Regardless of mode, what immediately shines through is how much more the new M5 communicates with the driver, clearly indicating when the limits of adhesion are being approached. This was the case even on streaming wet tarmac and it meant we were soon pushing the car beyond its limits, even in 2WD mode.

While this feature offers purists the opportunity to have rear-wheel drive in their new M5, they shouldn’t discount the fantastic 4WD Sport mode out of hand. We managed several, lurid tail slides in this setting, and the system cleverly adjusts the torque split so the transition is smooth and almost undetectable. All this bodes well for the new M5’s on-road performance, which we’ll test in November. BMW M will reveal more then, but we don’t expect there will be too many more surprises in store.

Despite the headline M xDrive four-wheel-drive system, it’s still perfectly possible to drive the new M5 with appropriate gusto! This then allows the driver to select 4WD, 4WD Sport or 2WD – yes, that’s rear-wheel drive! Don’t imagine for one minute that this new M5 is nothing more than a lightly-modified BMW M550i xDrive; there’s so much more to it than that. Purists rejoice; electronically selectable selectable RWD!