I may as well come right out and admit it now – I really, really dislike folding hardtop cabriolets. I know, I know; people feel more secure sitting under a hard roof than a fabric one, but I just hate the way they eat into boot space, how they ruin the styling by adding an extra-long boot lid and an odd roofline, and the way they put on pounds like a lapsed weight-watcher set loose in a chocolate factory!

Now BMW has updated the 4 Series Convertible to keep it fresh. It receives the same additions as the rest of the 4 Series range, so you get new all-LED headlights (with octagonal ‘Angel Eyes’ highlights), all- LED tail lights, new bumpers and re-profiled air intakes, optional extra chrome and new colour options, including the Sunset Orange of our test car – and Snapper Rocks Blue. 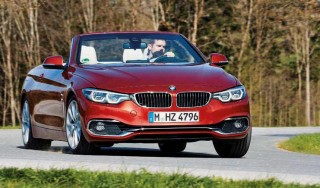 Inside, the updates are equally minimal, but effective. The overall sense of quality is definitely higher than in the outgoing version, and little touches like electroplating the switches with slivers of chrome, and the extra heft of the soft-touch plastic sections, really help. The instruments are (optionally) new, too – the same all-digital pack from the 5 Series that looks great in its normal layout, but too cartoon-y when you switch on Sport mode, in my opinion.

But the biggest drawback inside, of course, is the rear seats, which are more upright and much more cramped than in the (relatively practical) 4 Series Coupé – all to make room for the roof. Boot space suffers too, falling from 475 litres in the Coupé to just 370 litres in the Convertible with the roof up. Fold it down, though, and it’s worse still, at a storage-cramping 220 litres.

On the road, the 430i we sampled here is actually pretty good. The steering is sharp and fulsome, the body well balanced and the ride surprisingly comfortable (although the smooth, Bavarian roads and winter tyres may have contributed). Keep the roof up and, as long as you don’t try to go too quickly, you’d hardly know you were in a convertible.

But corner with some brio, or try to overtake a truck at short notice, and you’ll soon notice the extra 200kg, relative to the Coupé. Even the 252hp, 2.0-litre turbo four-cylinder engine struggles, often left roaring and straining at high rpm, trying to overcome the 430i’s avoirdupois.

It’s all a bit of a shame. The updated 4 Series Coupé is a terrific car, a classic BMW with its analogue (in spite of all its digital tech) feel. Yet the Convertible feels as it ever did – too heavy and not half fun enough. Maybe if the sun had come out, I’d have cheered up a bit…

Spirited cornering will soon start to reveal the 430i Convertible’s extra pounds, which is a shame. A mechanical masterpiece it may well be, but a retractable hard top can compromise the looks, interior space and overall weight.

“they put on pounds like a lapsed weight-watcher set loose in a chocolate factory!”