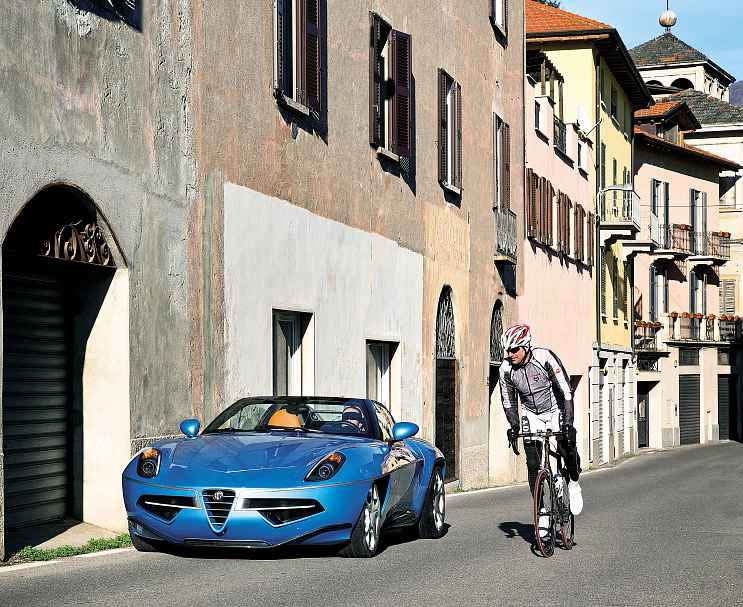 Insolent waves of V8 grumble are surging up the side windows and lapping into the open cockpit and I pause on half-throttle, fingers teasing the upshift paddle. Not yet. Not quite yet; let’s hold those revs for a bit and let the grumble mix with warm wind and glittering Italian sunlight. Then, as the corner unwinds, romp the power, and the waves detonate into full primal scream. And just short of sensory overload, acceleration still squeezing eyeballs ever flatter, I tap the next gear – and lift off completely, for the sheer blood-rush pleasure of the spitting, crackling over-run.

Yeah, fair enough, you’re right; the prose is not only turning distinctly purple here, this might even sound like déjà vu. I have indeed already gushed wantonly on these very pages about Touring’s fabulous Alfa 8C-derived Disco Volante, back in 2013 when I wrote Drive-my ’s exclusive first drive of the coupé version. Which was itself inspired by the C52 Disco Volante racers bodied by Touring for Alfa Romeo in the 1950s. From some media reviews based solely on press releases and web-chatter, too, you could also interpret the brand new Disco Volante Spyder as merely a fresh-air sequel to the 2013 car.

But in all smirking, totally disingenuous modesty, speaking as the only hack actually to drive the Spyder before the Geneva Motor Show, where its debut marks the 90th anniversary of Carrozzeria Touring Superleggera, don’t dare think of this as simply a re-make. Think of it instead as another movement in a symphony, an evolution on a central, timeless theme, individual in its own right while recognisable as part of a larger whole, and well worth some additional gushing. The closed Disco is a forceful but refined GT; the Disco Spyder is pure sportster, and the transition involved far more than simply omitting the roof.

Like most of Touring’s minuscule, handmade output, however, the decision to create the Spyder was essentially market-driven (and yes, they’re spelling it ‘Spyder’).

The commissioning buyer, who requests that we don’t publish his name, is an avid classic collector and a client of Touring’s restoration services, and, as he tells it, was chatting with company CEO Piero Mancardi beside the Disco coupé during a trip to its workshops. ‘I told Piero I like this car,’ he says, ‘but why don’t you build some open ones, like they made in the ’50s? And Piero said to me, why don’t you order the first?’ So, well, he did exactly that.

Fortunately, the Alfa-Romeo 8C Competizione that provides the Disco mechanicals was produced as both fixed-head and convertible. Not as fortunately, when Touring’s head of design Louis de Fabribeckers did preliminary studies of a Disco treatment on the convertible model, the outlook was less than favourable. ‘The proportions and balance were terrible,’ Louis tells me. Or rather, he shows me. A visual thinker, Louis sketches a lot, and always with pen, not pencil (‘if you can’t erase a mistake, you are forced to deal with it’), and on sheets nicked from my pocket notepad he gives me chapter and verse on the design progression. ‘With the wide front quarters of the Disco Volante,’ he says, pushing aside plates (an awfully nice veal Milanese, by the way) and grabbing more sheets, ‘the nose would look very, very heavy without corresponding volume in the rear.’ Sure enough, the first few renderings using something like the original Alfa Romeo rear and upper architecture resemble a vehicle someone started and forgot to finish. Then he begins to massage and adapt the contours, adding and shaping headrest fairings and working the blend between those, the sweeping hips and the rear deck areas.

The windscreen and side windows come next, lowering, altering the arch and rake, and again, merging every line into a clean sweep rearward with the flow of the overall bodywork. ‘We also wanted to have not so much a windscreen and windows as a wraparound visor, like a racing helmet, or the glass on a Stratos or the Jaguar F-type concept.’ Finally, he strikes a pair of matching curves, one above the other: ‘Looking down from an overhead view, you can see the glass curvature repeats the nose profile.’

These changes to the ’screen and its frame were among the major technical challenges. They are critical to the safety certifications, and without Alfa Romeo’s cooperation the process would have been unfeasible; both elements were replaced outright, not modified, and the carbonfibre A-pillars were widened to increase that helmet visor effect at the junction between the front and side glasses. Watching the entire process on paper, as a lesson in aesthetics, the end result is so logical and perfectly formed you’d swear the aforementioned symphony must be by Mozart, surely.

In person, as a real, working automobile, it’s a helluva lot more AC/DC. With a bunch of Barry White thrown in. Or maybe Prince. Crafted in hammered and wheeled aluminium and carbonfibre, it looks muscular and aggressive, especially in comparison to the coupé, while also being voluptuous, rounded, sensual. You might use the old Yiddish word ‘zoftig’, in its best, most exciting definition, and that’s particularly striking from the rear three-quarter perspective.

Detail items shared with the coupé somehow look bolder in this context, too, such as the splitter and exhaust tips, to the point that I had to check the 2013 photos to confirm they weren’t different, and that brassy attitude carries through onto the road.

Although the underpinnings haven’t changed significantly, wrapping them in topless coachwork naturally makes the driving experience more visceral. The Ferrari-Maserati V8 tingles your spine even inside the civilised Quattroporte; enjoyed with nothing but fresh air between ears and tailpipes and those bulging rear wings in your mirrors, it is glorious. Thanks to the revised glass, the Disco Spyder also gives a noticeably more panoramic aspect of the sky than the average convertible, and because the A-pillars were widened only at the top, not the bottom, driving visibility hasn’t suffered greatly.

As for raw performance numbers, let’s just say that with 450bhp it will rarely be found lacking. The open-top 8C furthermore includes improved Brembo carbon-ceramic brakes, plus extra chassis and suspension stiffening to compensate for the missing roof; more useful still in the real world, you can hydraulically raise the car by 35mm on rough stuff and it automatically lowers above 50mph. On the downside, engine start is via the nowubiquitous big silly button, right above the equally modern and ridiculous electronic parking brake, and I suppose manual-shift Italian exotics are now as extinct as personal privacy and cursive writing.

Contemporary technology is admittedly ideal for this car’s mission statement. The buyer drives his cars often and far, and while he wanted this one to be striking and special, with the lines and mood of a traditional barebones Italian barchetta, he also wanted a modern performance car (this will be his first non-classic, excluding everyday saloons) that he and his wife could take on touring holidays ‘with a decent roof that fits properly, and doesn’t need an hour to assemble’.

Louis consequently binned the notion of anything remotely like a conventional fabric hood; that solution offended his principles anyway. ‘Most companies design a top that either looks good up or down, but never both,’ he explains. ‘For this car, the aim was a top that looked so natural when up you would never believe it could come down, and so natural when down you could never believe a top on the car was possible.’ His answer was a pair of wafer-thin carbonfibre panels, slightly overlapping along a centre corrugation to increase rigidity, weighing about 3.5kg each. There’s even some usable boot space left with the panels stowed away, if you pack small, and with the panels installed, the boot seems positively huge by supercar standards, thereby addressing another of the buyer’s priorities. Cockpit wind turbulence while uncovered isn’t really intrusive at normal, legal speeds, either; nor are engine and road noise, provided you can keep control of your right foot (granted, that’s a lot to ask). Long-distance travel should be no hardship at all.

The full complement of Alfa 8C convenience and comfort equipment is obviously part of the Disco package: power windows, air-con, a very welcome reversing camera, scads of electro-readouts, the whole toy store. Seating, meanwhile, is in proper, serious, manualadjust carbonfibre buckets, with excellent lateral support. As you’d expect from a bespoke coachbuilder, covering and colour options are infinite, and the buyer’s choice of bright saddle-ish Connolly interior leather works quite tastefully with the sky blue exterior that satisfied his blue-car passion. Translated directly, it’s Blu Ceruleo, but he likes to joke: ‘Louis told me I should really call it “Heavenly Blue”.’

As per Touring’s established practice, production will be excruciatingly limited, seven units all told, and they’ll only discuss prices directly with customers. Considering the £175,000 you’ll spend on a donor Alfa and the 4000 hours allocated to stripping and re-dressing it in traditional Italian handcraftsmanship (and having seen it happening, I’m surprised the teardown alone isn’t 4000 hours), better bring a fairly healthy chequebook. Better step lively as well; Touring says ‘more than half’ of the seven planned are already spoken for, and that’s before the official launch. After all, this is one symphony that likely won’t have an encore.

Despite a legacy extending to the original Alfa Disco Volante of 1952, a renowned Touring masterpiece of a different bloodline altogether played an important part in realising the new Disco Spyder. The Spyder’s commissioning buyer also owns the 1950 ex-Gianni Agnelli, ex-Olivier Gendebien Ferrari Tipo 166 MM (left). Bodied by Touring and using its pioneering lightweight Superleggera technology, the 166 MM is among the truly great barchetta designs, a minimalist triumph with effortless, graceful lines, competition-proven mechanicals, and only the barest of road equipment. For many a post-war enthusiast, it’s the absolute definition of the term ‘sports car’.

This is the car the buyer was visiting in the Touring restoration shop, undergoing correction to repairs completed elsewhere for a previous keeper, when he was taken with the Disco coupé – a car inspired by yet another legendary Touring work of the same period, first shown in a similar, stripped-down open barchetta style.

A modern interpretation, however, for genuine highway use, would certainly require modern measures of weather protection, a real windscreen, perhaps a boot… and, as you can see, it does. And the refurbished 166 MM won the 2015 Entrant’s Award for Best of Show at the illustrious Villa d’Este concours.

‘As for raw performance, let’s just say that with 450bhp it will rarely be found lacking’