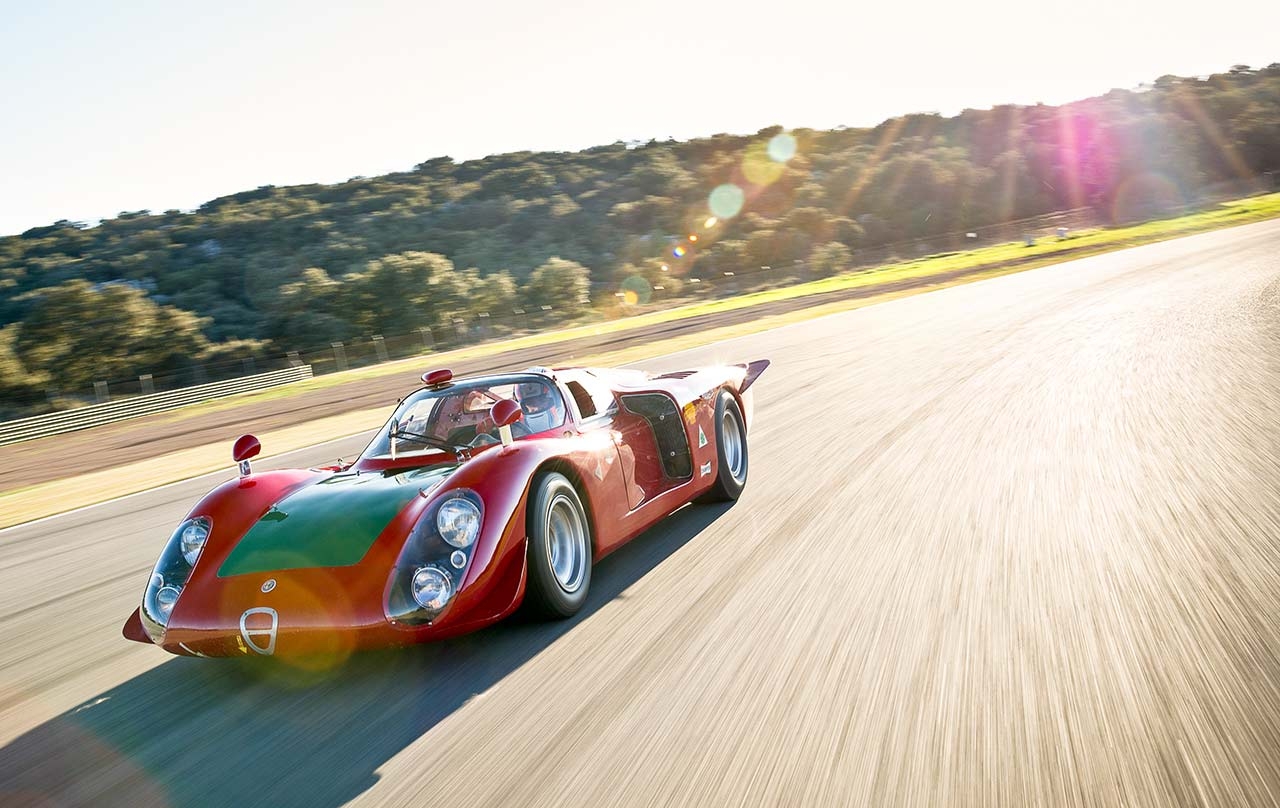 Poll the younger generations today and most would probably assume Ferrari to be the most illustrious of automotive marques. They may well be correct, but it wasn’t always so. In the first half of the 20th Century, Alfa Romeo best advertised Italy’s automotive prowess, with a level of competition success envied by all at the time except, perhaps, Mercedes-Benz.

The P2, the Tipo B, 8C 2300 and Alfetta Grand Prix cars all contributed to the burgeoning Milanese trophy cabinet until the brand shockingly retired from competition in 1953, by when it was under government control. So when Alfa Romeo announced its return – not only to motor sport, but to top-flight international sports car racing – some 14 years later, it generated a level of excitement comparable, for example, to that of Porsche’s return more recently to LMP1.

The unveiling, in March 1967, of the Tipo 33/2 sports racing prototype marked the company’s first bespoke competition car since the Disco Volante of 1953, and the preceding Type 159 Grand Prix car that carried Juan Manuel Fangio to his first championship. That the Tipo 33 would also form the basis of the achingly beautiful, limited-edition Stradale road car, only added to the sparkle.

Conceived with a high-revving 2.0-litre (hence the number ‘2’ in the type name) V8, the racing programme’s commercial justification was never in doubt. The brief? Wrestle the 2.0-litre championship from Porsche and develop engines for the production line.

Motor sport legend Carlo Chiti was the man charged with the task; the rotund Italian racing car designer and architect of Alfa’s earlier motor sport success returned to the marque from Ferrari after a hugely successful stint when he oversaw, among other things, Phil Hill’s world title in the shark-nosed 156. Back in Milan and placed at the helm of Alfa’s works motor sport department, Autodelta, Chiti worked with designers Orazio Satta Puliga and Giuseppe Busso to devise a radical, aeronautically inspired chassis that informed so much of the Tipo’s impending legacy.

An enormous and strangely asymmetrical ‘H’ forms the bones of the car in three giant tubes of aluminium. Some 8in or so in diameter and 5ft long, the two identical side-members run flat along the sides of the car, underneath the doors, while the smaller third tube is riveted laterally behind the seats, ahead of the mid-mounted engine. All are rubber-lined internally and double as fuel tanks.

Plinth-like in scale, the left side-member intrudes oafishly into the driver’s space, helpfully shoving the seat further towards the centre. The right side-member sits symmetrically opposite and, in the deep, open space between the two, the genius of the design is revealed: an airy, voluminous interior cavity that provides ample space for its occupant, despite a comically low roofline. In fact, so unusually flat was this chassis that it thrilled concept car designers of the time, who used it as the basis for some of the most exciting styling projects in automotive history. Pininfarina’s 33 Speciale Prototype and Roadster, Giugario’s Iguana and Bertone’s gorgeous Carabo all house the AR75033 chassis.

Chiti too took full advantage, lowering the car so much that, even if I sit next to it on the ground in a reclined driving position, my head is higher than the roof! Fortunately, chassis 019 is an open-top ‘Daytona’ coupé and, with some swift handiwork by preparer Tim Samways and his crew to modify the seatframe and pedals, it’s not long before I am genuinely comfortable and safely ensconced, despite being 6ft 2in tall.

The Daytona moniker was officially adopted after the 33/2 finished first and second in the 2.0-litre class at the 1968 running of the Floridian 24-hour race. That year the car went on to net 21 victories in total, comprising 15 overall triumphs and six class wins. Crucially, 33/2s entirely filled the 2.0-litre podium at Le Mans. A resounding success, then, at the longest of endurance races – and yet, a few laps into my first run at the spectacular Race Resort Ascari in southern Spain, it sure doesn’t feel like a long-distance racer. More like a sprint-focused kart.

The V8 screams high up to 10,000rpm and demands you exhaust the six-speed dog-box to keep the revs at least above 7000 because what lies below that is a recalcitrant muddle. Stay in the power band, however, and the motor pulls so sweetly that terminal velocity on even the longest straight remains a distant consideration, thanks to the extremely low drag afforded by the slippery body.

An output of 270bhp might not sound much but, with only 580kg to propel, it feels at least half that again. Drifting into – let alone out of – corners, however, isn’t exactly what I’d call an endurance racing set-up, but it sure as hell is fun. The short wheelbase and narrow track make the car so responsive that even a hint of turn-in while braking pitches the rear out and the front in, necessitating a deft touch of throttle to repurpose the wagging tail and a touch of opposite-lock to maintain trajectory.

In the medium and fast corners, where the curvature of the turn is quite shallow, this works well; the glassfibre-bodied chassis feels light and nimble, if not a little nervy. But in the tighter hairpins and ‘piff-paff’ chicanes where you create more of a pendulum effect, the need for bigger steering inputs is met with resistance. Induce any excessive roll and punishment comes in the form of a mid-corner snap of oversteer – on one occasion, while I am trying a stiffer anti-roll bar setting to provide more support, it leaves me pointing the wrong way. Later, while at Monza to race the car, I talk directly to fabled former works driver Nanni Galli, who explains that they never quite managed to iron out that characteristic, that it was inherent in the chassis design, and that I should try to work with it, rather than fight against it.

I know what he means. Pushing on through the Autodromo’s two 90º Lesmos and the long-radius Parabolica, I learn that the platform of the car prefers to remain flat. Killing the speed sooner than I would like, while the car is still straight, helps me to achieve this. It allows me to bleed off the brakes earlier, releasing the nose more from its ‘dive’ before turning in. Asubtle adjustment but, combined with more precise, patient inputs, the car feels stable thanks to the load now being better shared by all four tyres. Certainly the slower corner entry style costs me lap time, but I can compensate by getting on the throttle sooner to carry more speed through the exits. No bad thing, considering the importance of getting back into that power band.

So far so good then, yet I can’t help but feel the technological limitations of the car’s era inhibiting some aspects of performance, while others are comparable even with today’s machinery. The braking, for example, is exceptional. With vented discs all-round, the 33/2 stops on a sixpence, but that’s no good if the notoriously crunchy dog-box refuses to be rushed down its six ratios and the treaded Dunlop Post-Historic tyres object to any form of trail-braking. Design revisions to the gearbox internals and set-up improvements by the preparer go a long way to alleviate the frustrations, but I’m still losing lap time to compromises.

The funny thing is that it seems I’m the problem! In discussion with the amateur (or ‘gentleman’ drivers, as they may or may not wish to be described) who have raced the car in recent years, they have nothing but praise for Alfa’s famed creation. They report little of the oversteer that has bothered me and, while they might have fluffed the odd gearchange, they positively revelled in the kart-like sensations of the car. Naturally (they won’t mind me saying) these chaps are a second or two away from the pace of us pros, and I wonder if therein lies the key? Wring the 33/2’s neck in search of every last tenth and prepare to pay the consequences. Ease up a little, though, and drive with the end of the race in mind rather than simply maximising every corner, and be repaid in spades with a sweet and dynamically balanced car that is both fast and manageable. How convenient, then, that this is exactly how long-distance races needed to be driven at a time when minimising the prospect of component failure was priority number one. Turns out the 33/2 is a great little endurance machine after all.

‘DRIFTING INTO – LET ALONE OUT OF – CORNERS ISN’T EX ACTLY WHAT I’D CALL AN ENDURANCE RACING SET-UP, BUT IT SURE AS HELL IS FUN’

Left, below and right Sit 6ft 2in Hancock next to the car and his head rises above, yet the open cockpit means he fits; Tipo 33/2 offers dart-like responses out on the track. Far left and above Alfa’s V8 is only 2.0 litres in capacity, so it could take the class fight to Porsche – 270bhp is a mighty output for natural aspiration in the 1960s; cockpit is raw, businesslike and focused.