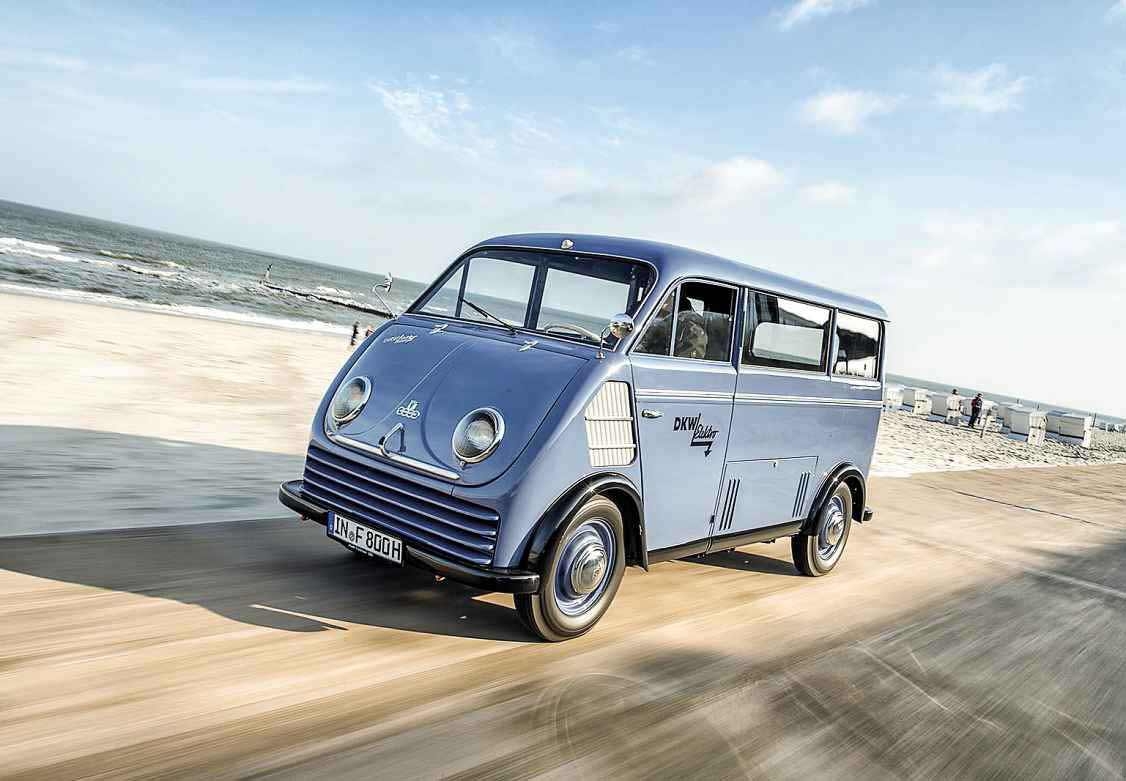 There’s a slogan on a sign by the harbour that translates as: ‘God created time, but he never mentioned haste.’ An annual beach volleyball tournament is a major attraction; the most popular place to eat is called Pudding Café; the island’s oldest building, known as the Western Tower, was built in 1597 – and started life at the eastern end of the island, but ended up so-named thanks to the North Sea current and the island’s shifting sands. Welcome to Wangerooge.

There’s a village-size population living here, numbering just under 1300, yet that figure easily broaches 7000 during the holiday season. Those people come to relax. They come to ‘get away from it all’. And that includes their cars. There is no internal combustion allowed in Wangerooge. If it moves along the road under its own power, then it’s electric. Even then, it’s likely to be ferrying passengers from the narrow-gauge railway station, the airport or the harbour to their hotels. And today, one of those vehicles has special historic importance. It is a DKW Elektro-Laster, freshly restored for Audi Tradition’s collection, and back here as a reminder of the days when four Elektro-Lasters were the only powered road vehicles to hand.

Wangerooge is the easternmost of 32 islands in the Frisian archipelago, which fans along just a few miles off the North Sea coast of Germany and The Netherands. Wicker chairs dot the beaches and shelter sunbathers from the sea breeze; windsurfing attracts those who would rather be active. The place advertises itself as a spa resort and, in German tourism terms, it is as far removed as you could possibly get from a track-day at the Nürburgring Nordschleife. The island is barely five miles from one end to the other and covers an area just over three square miles, so even the 25mph top speed of the Elektro-laster means you’ll make it from Western Tower to Pudding Café before they stop taking orders. Well, probably.

Ralf hornung is the man in charge of buying and restoring historic vehicles at Audi Tradition. Those works Quattros that spat fire for Mikkola and Röhrl? He looks after those. As well as a multi-coloured multitude of road cars from massive Wanderers and Horchs via tiny two-stroke DKWs and Auto Unions to those ‘Mercedes-Benz for schoolteachers’ Audi 100s of the 1970s. Dotted about in the storage facility at Ingolstadt is the odd petrol-powered DKW Schnellaster too.

‘They were a familiar sight to so many people in Germany,’ Ralf says. The name translates as ‘rapid transporter’, thoughschnell is probably stretching things a bit when the power – all 20bhp of it – comes from a front-mounted, pre-war-engineered 684cc two-stroke driving the front wheels via a three-speed manual ’box with column shift.

Yet the Schnellaster is a highly significant vehicle, being the first produced at Ingolstadt – home of the modern Audi empire – when Auto Union relocated there after World War Two from Zwickau via Düsseldorf (moving from east to west, rather like that tower). It was hugely successful, evolving into a range of commercial vehicles, gaining the three-cylinder 896cc engine of the DKW 3=6, and remaining in production until 1962. It was a cheeky-looking little van, with those appealingly expressive headlamps fronting a functional, boxy body.

‘The design of the Schnellaster was important because the vehicle was very practical, not only for business but also for family use,’ says Ralf. ‘It was much smaller than the sort of truck you could buy before the war. For example, if you ran a bakery, you could collect your ingredients in the Schnellaster and also use it to deliver bread to the customers. But in the evenings or at weekends, you could fit your family into the back. Many of them had a removable bench, even glass in the side panels, and the front passenger seat would swing up to allow access into the back.’ It was simple, basic, well-made and inexpensive.

Beginning in 1955, around 100 electric-powered versions of the Schnellaster were built and called, perhaps inevitably, Elektro-Laster. They were intended for use by the postal service, local authorities and electric companies such as RWE (Reinische Westfällisches Elektrizitätswerk) – perfect for short journeys during which quietness and lack of exhaust pollution were more important than speed or range. Four were in service in Wangerooge until the 1980s, with minibus bodywork. At DM8000, the Elektro-Laster cost much the same as the equivalent Schnellaster – though you had to stump up another DM4000 for the batteries, plus a further DM1500 for the charger! Which sounds familiar.

In place of the engine and gearbox went a 4.8kW motor with chain-drive to the front wheels. The column-shifter became a four-position regulator (off, slow, bit faster, flat-out) for the electric motor, so there was no accelerator, merely a brake pedal protruding through the floor. Battery packs were fitted into sliding trays aft of the cab in the vehicle sides; they contributed greatly to the not-insignificant 1800kg kerb-weight.

‘Audi Tradition wanted us to have more alternative-powered vehicles in the collection,’ says Ralf. ‘I remembered this one but there are so few left. In fact, the only other we know is a flatbed version in Museum Strom und Leben at Recklinghausen.’

The chassis and bodywork were sourced from an RWE vehicle, while the drivetrain was all that was left from the Wangerooge fleet. It took three years to restore, all the work being carried out by Torsten Bach and Timo Räppel of Chemnitz, who have long specialised in pre-war DKW cars and motorcycles – Chemnitz was home to Wanderer, and also the Auto Union head office in the 1930s.

While the bodywork was stripped and repaired as necessary, strict German road vehicle legislation mean that changes had to be made to the powertrain. Gone is the tram-style regulator (only its shifter remains), in its place a dash-mounted lever to select forwards or reverse, while an accelerator (of the type normally fitted to a Schnellaster) pokes out next to the brake pedal – and the latter now operates a very modern regenerative braking system, so that electricity is recouped when you slow down, as happens in today’s electric cars and hybrids. Naturally, there is still no clutch. The batteries are again fitted in those slide-out trays, though they are modern sealed units, in place of the old wet lead-acid cells.

Ralf suggests that there’s a realistic prospect of driving 50 miles on a full charge, so we don’t have to worry about running out of power today: strange to think that range anxiety is nothing new, even if green guilt is far greater now than when the Elektro-Laster was created.

I swing the rear-hinged driver’s door open and clamber up. There’s very little trim to speak of, simply painted surfaces throughout and rudimentary vinyl-padded perches – two up front and a pair of longitudinal benches over the battery carriers behind.

Operating the little minibus is very simple: there’s an umbrella-style handbrake under the dash and that two-position lever to the left of the wheel to select direction of travel. I click it firmly forward and ease my foot down on the accelerator pedal. There’s a washing machinelike whirr as the electric motor gathers its wits and we shoot forwards. Just like modern electric vehicles, the Elektro-Laster produces peak torque potential at a standstill and the thrust is largely linear thereafter. Right up to the lofty environs of 25mph. Yep, in seconds we’re flat-out at rather less than the typical British urban speed limit.

Yet fun isn’t all about speed and the Elektro-Laster is an absolute hoot. What’s not to like about zinging around in a tiny bus with looks straight out of Disney? And it whines in a way that would instantly bring back memories to many of the days when milk was delivered every morning to British homes from the backs of electric floats.

Dynamically there is little to say: on-limit handling isn’t really relevant to such a slow vehicle yet the steering is direct and devoid of the vagueness you might expect. Sure, it crashes over bumps, and those seats would soon become tiresome – but, then, I’m pretty sure I could put up with it for 50 miles, then find something else to do while it recharges. Such as windsurfing. Or maybe a snooze on one of those wicker chairs. We might be adrift in the North Sea on an island whose east end has rotated west, but there’s not much that’s mad about the DKW Elektro-Laster.

Top, above and right At full chat along the seafront – well, 25mph, anyway; Wangerooge’s own fleet of Elektro-Lasters was in service until the 1980s, and each featured a canvas tilt.