Saab 900 Turbo 8-valve Series-1/fase II road test. A decade ago Saab led the turbo revolution, but is its cheapest turbo keeping pace with technology? The 1989 two-door turbo stands as testimony to Saab’s remarkable skills in designing, developing and marketing cars. For 18 years it concocted all new models from the 99 with its four-cylinder ex-Triumph engine. In spite of such a humble starting point the company forged a path upmarket, a cause taken up only recently by the 9000, Saab’s offspring from the Type Four collaboration with Fiat, Lancia and Alfa Romeo.

Pivotal in this image transformation was the 99 Turbo, the first turbocharged car to go into series production. The 1989 Turbo hatchback and the cheapest blown version in the current line-up, the £13,650 two-door 900, are very similar cars.

Surprisingly, the new car retains more of the original 99’s looks. The 900 snout and reworked rear lights blend with its upright, wrap-around screen and pinched tail to produce a distinctive shape, a functionally elegant blend of straight lines and curves.

Beneath the skin is the familiar, but now unusual, suspension; coil-sprung double wishbones at the front and a beam rear axle located by Watts linkage and a Panhard rod at the rear. Not an anti-roll bar insight. Braking’s by discs all round and steering by power assisted rack and pinion. Drive is taken via a three row chain to a five-speed manual gearbox and on to the front wheels. There is no automatic option. 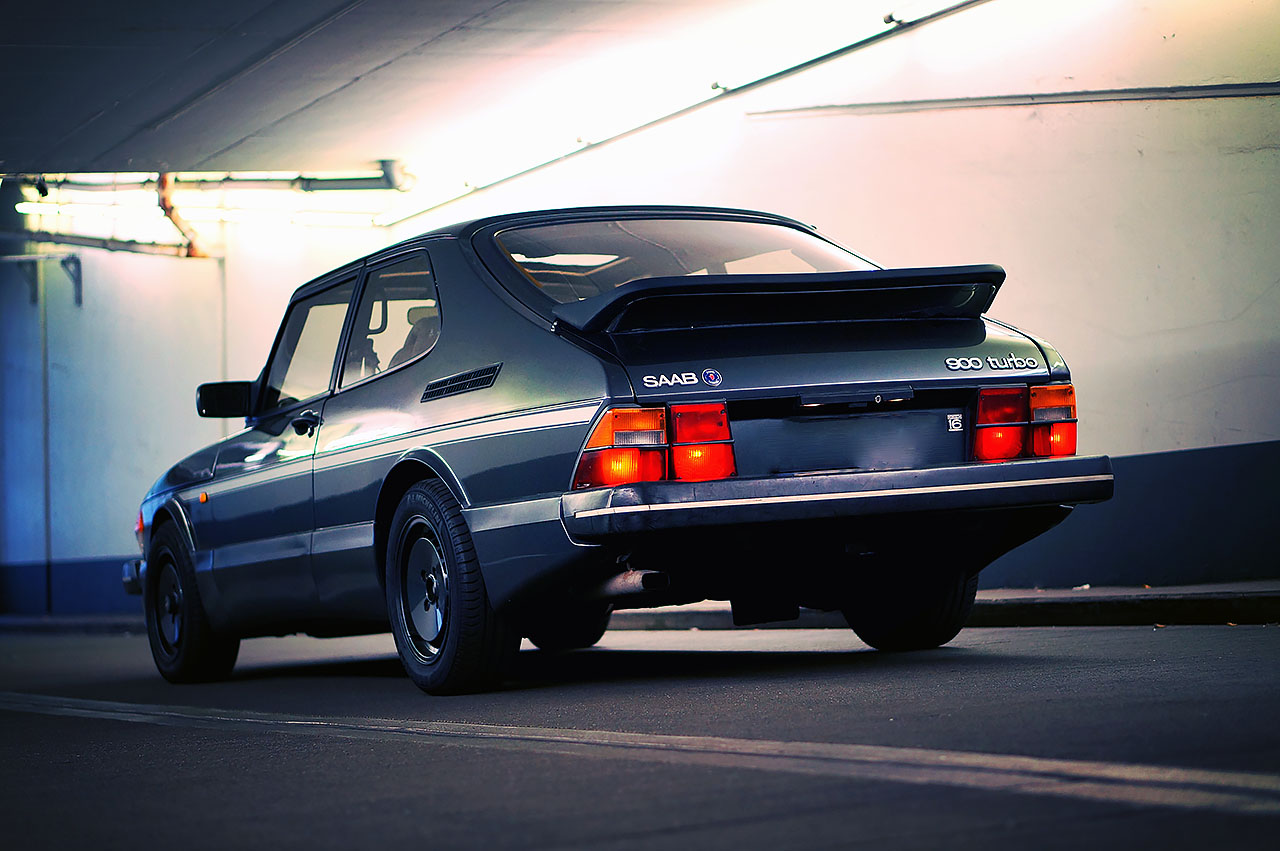 The longitudinally-mounted 1985cc engine has changed a little; in 1986 it gained an intercooler which raised power from 145 to 155bhp, and since 1982 it has been able to run on low octane fuels, including unleaded, thanks to Saab’s Automatic Performance Control. APC senses knock and stops it by opening the turbo wastegate and reducing boost pressure.

On top of its cast iron cylinder block is an aluminium alloy head with a single chain driven camshaft operating two valves per cylinder. Fuel is administered by Bosch K-Jetronic mechanical injection and the turbo boosts to a maximum of 0.7bar to produce 155bhp at 5000rpm and 177lb ft of torque at 3000rpm. 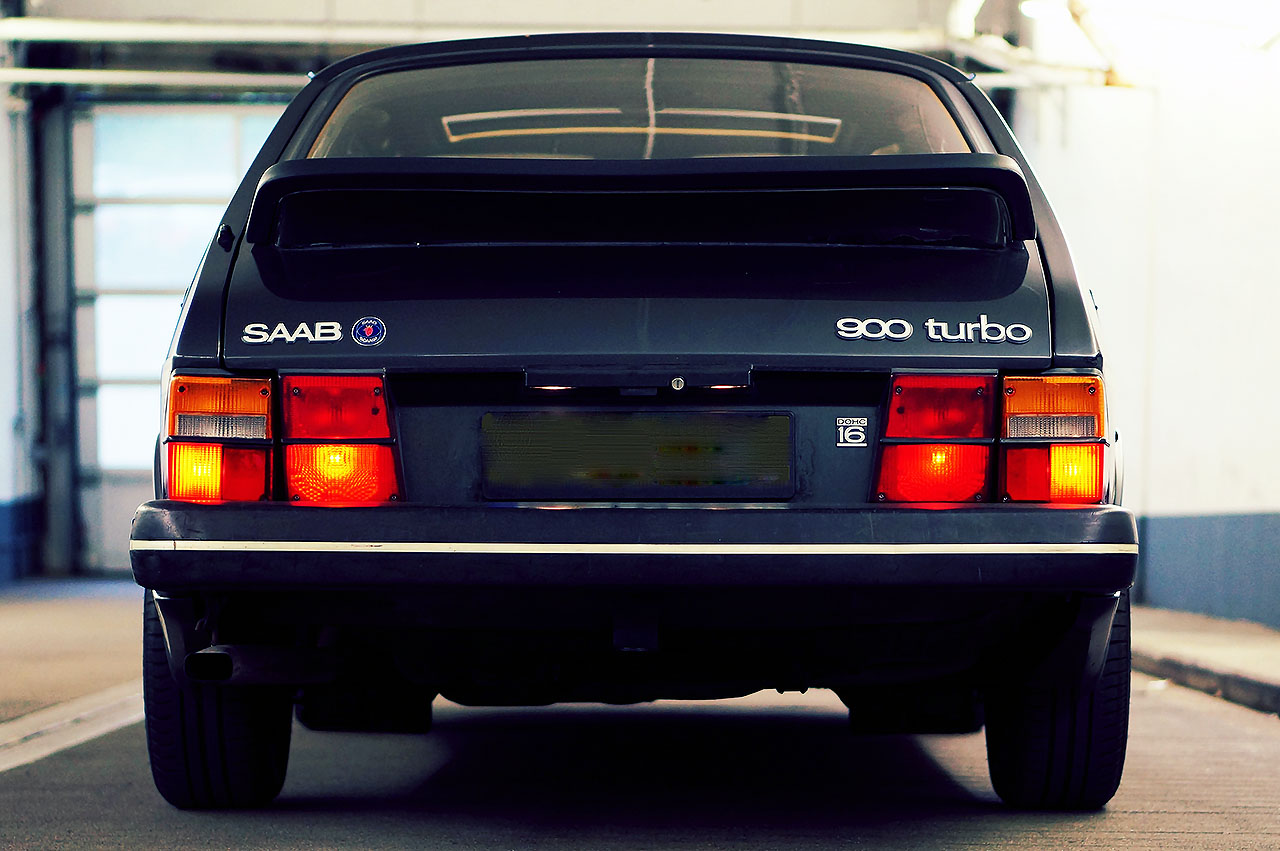 The 900 is not sparsely equipped; it comes with heated seats, central locking and headlamp wash/wipe. But the £ 1275 option pack, as fitted to the test car, brings its specification on to a more even footing with the Japanese cars, adding electric windows, mirrors and sunroof and alloy wheels.

It might appear a touch prim but the Saab gives its rivals a good scrap. To 60mph it has the measure of all but the Montego, dipping to the tape in 8.9secs. And not even the MG can match its scintillating 7secs for 30-50mph in fourth. Slot up a gear and 50-70mph is covered barely slower, at 7.3secs. Its head-up profile hinders top speed, though; 120mph is no mean achievement but its sleeker rivals press on towards 130.

With such an eager-sounding set of figures you would expect the Saab to be a tremendous point to point car, and it can be. Sweeping A roads, where the boost doesn’t have a chance to subside, reveal its best nature. The way it surges powerfully up inclines on part throttle is one of the delights of a turbocharged engine.

But the spectre of turbo lag looms large when the going gets twisty. Coming out of sharp turns the car seems forever caught in the wrong gear. And just when boost has built up again the next corner has arrived. Overtaking needs to be planned.

Despite the large step in power to full boost the transition is reasonably progressive. The early whistle of the turbo and the steady climb of the boost gauge needle inform the driver that boost is on its way from just over 2000rpm and it arrives in a controlled wave. For a four-cylinder engine the powerplant is exceptionally smooth and becomes hoarse only as the 6000rpm red line approaches.

Swift changes up require a firm, precise hand because the lever moves starchily across its gate and displays an inability to slot home crisply. Even when unhurried it is a reluctant change and finding fifth requires particular deliberation.

Generous use of the performance can force consumption as low as our 19.1 mpg which is unimpressive alongside rivals that typically turn in around 25mpg. The calculated touring consumption of 27.6 suggests that the figure is unlikely to better 30. At the touring rate the 900 has a useful range of around 400 miles between fill-ups of its 13.9 gallon tank.

There is a decisively sporting edge to the Saab’s handling and ride. The steering is beautifully weighted and geared, turn in crisp —almost too keen on first acquaintance. In the dry, understeer is well contained and when the surface is greasy the nose still tucks in readily, the 185/65 Michelin MXV tyres biting through. Ill-judged applications of power bring the expected widening of line but the chassis reacts swiftly to a closed throttle, helpfully balancing the situation with a little slip at the rear.

The penalty for such agility is a resilient ride. At town speeds the suspension picks up most irregularities but rounds them off effectively so that no harshness enters the cabin. At higher speeds the same is true, the chassis acknowledges hollows and bumps. But they can cause the car to fidget, and over long wave undulations the 900 bounces gently from peak to trough. It’s a solidly sporting performance. 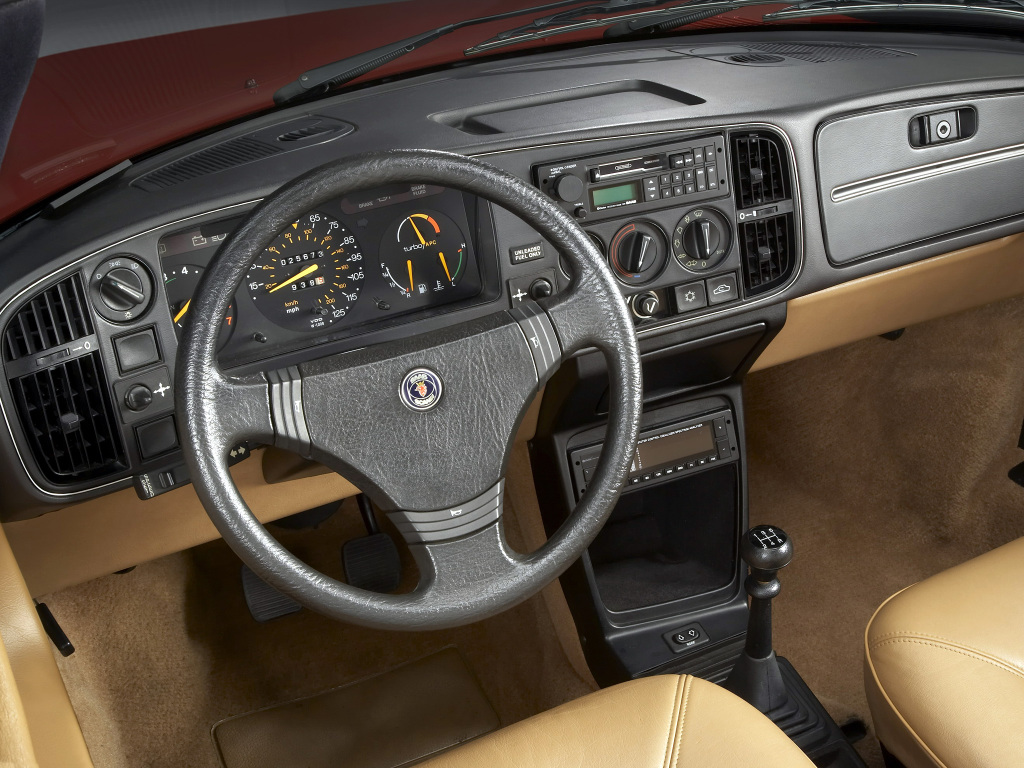 Dash looks cluttered but ergonomics are good. At night only essential controls are illuminated. 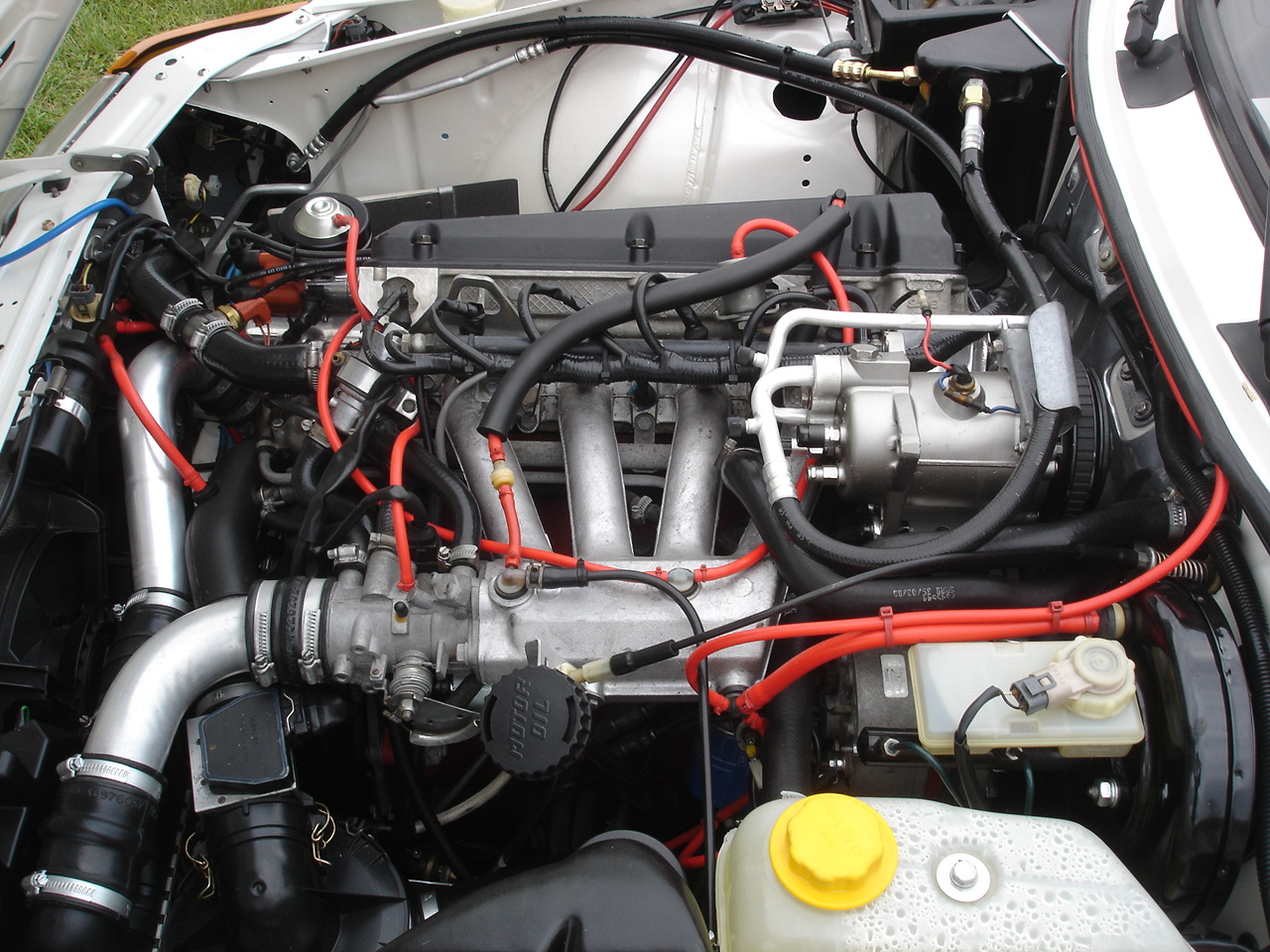 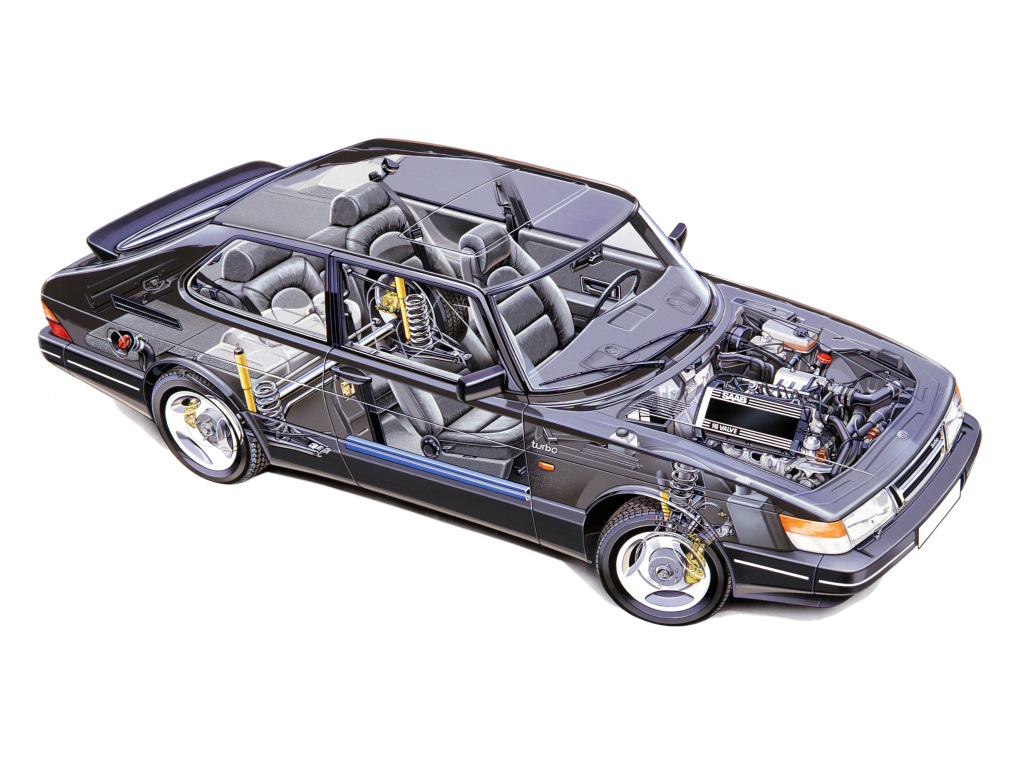 Brake pedal weighting is good and its superb progression is marred only slightly by a fractionally soft feel. Even so, the all-disc system is reassuringly powerful, and the very best performance can be extracted precisely. Curiously, anti-lock is available as an option only on 16-valve 900s.

The 900 is not a quiet car but most intrusions are subtle. At modest speeds it is, by turns, transmission whine, tyre rumble or turbo whine that filters through. At cruising speeds there is a rustle of wind noise but it is the heterodyning engine sound that dominates. Only the latter becomes irksome.

From the inside the Saab shows its age but in this case the remark is not demeaning. The 900 is different but undeniably effective. The wrap-around screen, slim pillars and upright driving position give excellent all-round visibility and the instruments are of a bold, no nonsense design. The dashboard, cluttered at first glance, is ergonomically better than most.

Although there are few tailoring opportunities the driving position is good. Space front and rear is reasonable if not generous and the boot is large, though the shallow opening will resist some long, bulky loads which could otherwise exploit the folding rear seat.

The heating and ventilation system, operated by quietly wheezing pneumatic valves, is versatile and powerful, and the stalks act with a rare, smooth precision. Finish is very good; doors shut with a reassuring clunk and trim is free of rattles.

The 900 series-1 has its drawbacks; the ride is too lively, lag can become tiresome and the engine thrums at cruising speeds. Space efficiency standards have improved since its cabin was designed, too.

But in a market dominated by the efficient and faceless, the characterful 900 stands out. Quirky looks are part of its lure, but its main draw is solid quality and stimulating performance — an uncommon blend.