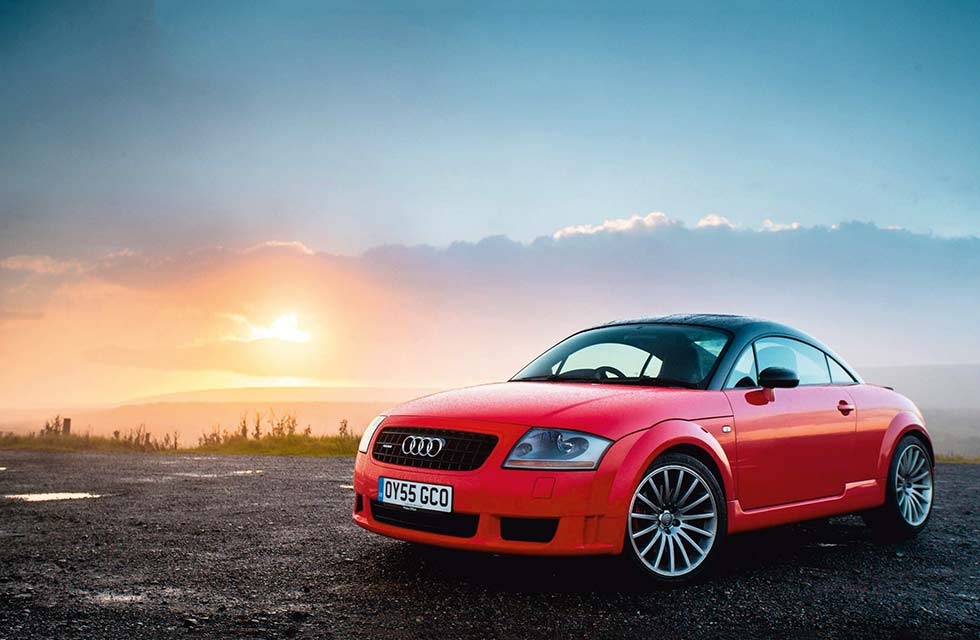 It’s every bit as good to drive as it looks – trust us If Yorkshire is God’s Own County, then the moorland roads between Manchester and Huddersfield are His Holy Test Track. In the 1920s a young tearaway named David Brown used to race motorbikes and his own homebuilt special cars on these roads. He went on to buy Aston Martin and create the legendary DB-series. In more recent times, before it was confined to Wales, the Lombard RAC Rally ran through these parts, the windswept moorland echoing to the sound of Group B monsters scattering stinging gravel and firing long, fat flames into the night.

There’s fast flowing tarmac up here on the Woodhead Pass. There’s slippery, frozen asphalt on the fir-shadowed apexes of the A6024. Beneath the lunar-looking Holme Moss Transmitter Station the going gets serious: it’s rutted and uneven. Perfect territory, then, for the Audi TT Quattro Sport, one of just 800 built, to prove its worth.

With the pressure of the Quattro rallying dynasty bearing down on its Bauhaus-curved shoulders, it promises grip aplenty in a compact, nimble wheel-at-each-corner package. And it’s a coupé too, which is just as well, because it’s bloody freezing up here…

Two distinctly old-school sounds pierce the early spring-morning quiet of suburban South Manchester. The first is one of those trusty T-shaped plastic ice-scrapers chiselling its way across a windscreen, and the second is the barely-silenced boom and crackle of a high-performance turbocharged four-cylinder. No whispering fuel saver this, but rather the kind of whirling, scudding turbine that catapulted Porsche 911s and Lotus Esprits into the supercar league and rally cars sideways through forests. It’s a deep baritone tearing noise that means blunt, punchy business. I’m more worried about being able to see out of the windscreen than waking up the locals, but I bet a few curtains are being twitched. Heading for the deserted M62 at dawn, slinking past the darkened shop windows of sleeping Cheadle Hulme, I’ve got time to reflect on the TT’s journey to classic status. It’s ironic really, because Back when I was walking these very streets en route to school, I loathed the Audi TT 8N.

It arrived hen the sports-car renaissance was in full swing. Provoked by the success of the Mazda MX-5, almost every car company was building small two-seaters as a cheap way of plugging the gap left by a departed generation of power-crazed 1980s bruisers killed off by uninsurability, recession and emissions legislation. Deep down, most carmakers knew that a fair few MGFs, Alfa Romeo Spiders 916 and BMW Z3’s E36/7 were being bought on looks, but no engineer would dare let them reach market without ensuring Tiff Needell could joyfully drift them round a test-track on Top Gear first. With that in mind, the early TT seemed a rather cynical thing that treated the sports car buyer with contempt. Its 1930s-streamliner looks were much praised, bringing a uniquely German contribution to a predominantly British, Italian and Japanese sports car scene. But lurking underneath was the leaden floorplan of a MkIV Golf. Steering feedback was virtually non-existent, the convertible version had the side-profile of the Tellytubbies’ house, and worst of all, it turned out that its aerodynamic efficiency was mainly visual. Before a rear spoiler was added in a high-profile product recall, the shape of its rounded buttocks had a nasty habit of failing to keep the rear tyres planted at autobahn speeds. Still, people bought lots of them, and for a moment it seemed like the TT might actually kill the sports-car boom through an overdose of superficiality.

But as we roar around the empty M62, I find myself repenting. Quattro GmbH’s persistence in developing the TT ultimately paid off with the Sport. An ice warning flashes repeatedly on the orange dashboard screen, but grip is limpet-like, even as I twitch between lanes to join the M67 that’ll take me out to the A628 and the Moors. The grip helps to make best use of the Quattro Sport’s 237bhp thrust too, an incredible trick for a compact 1.8-litre four-cylinder engine brought about by using a Ferrari-style five valves per pot. This most potent of four-wheel-drive TTs sat between the Porsche Boxster S 986 and 911 Carrera II 996 in terms of power, but with a chassis balance far closer to 50:50 compared to the 911, it promises greater real-world speed.

There’s an opportunity to test that theory as another early riser looking to exercise his 996 hoves into view on the M67. I slow, let himrocket past, then drop a gear on this slick-shifting six-speeder and flatten the throttle against the thin, lightweight carpet. There’s no rear-end squat or nose rise, no squirming or scrabbling. Just a sucker punch of torque that forces me deeper into this back-clamping one-piece bucket seat as the engine screams, snarls, and snapples on the overrun.

As I hurtle past the surprised-looking Porsche pilot, I catch sight of the reflection of the TT in the 996’s windows and I’m struck by how overtly purposeful it looks. That black roof – standard on the Sport – visually lowers the whole thing, and that plastic extension to the rear spoiler reminds me of a 1970s Porsche 911 930 Turbo.

Then there are the seats. Harsh and unyielding, yes, but with a visible body-coloured glassfibre shell and provision made for harnesses, plus the removal of the TT’s pointless plus-two rear seats, it’s more Lotus Exige than VW Golf. The high bolsters and low roof make it as difficult to get in and out of as a fully caged-up racer. Bare aluminiumis on show everywhere, Alcantara replaces the usual leather, and anything relating to luggage-toting has been trimmed back to the point where I’m surprised it still has a glovebox lid. If the accusation that the original TT was a poser’s car was valid, then this hardcore version is almost a self conscious overreaction – and is all the better for it.

‘AN ICE WARNING FLASHES ORANGE ON THE DASH, BUT GRIP IS LIMPET-LIKE AS I JOIN THE MOORS’

But how will it cope on some of the toughest roads England has to throw at it? I turn off the A628, past a sign warning HGVs not to bother, and onto gravelly, rutted tarmac frequented by farmers in pickup trucks. Away from the slick A-roads, the TT Quattro Sport starts to get uncomfortable, the stiff suspension joggling the little coupé constantly to the point where the steering wheel starts to feel like a pneumatic drill.

And yet there’s nuance. Rather than being the victim of Max Power-style short-travel-damper lowering, the Sport fizzes with information overload. The pleasantly heavy steering is telling me which way the front wheels are being nudged. The hard shell of a seat jabs chassis messages through as the stiff suspension skitters the rear wheels over ripples in the road clinging to the slopes of Holme Moss Hill. There’s an unexpected sense of confidence.

It’s that Haldex four-wheel drive system. No matter what scrapes the TT gets itself into, you respond to it physically, your body reacting to its various vibrations in order to point it in the right direction. Plant your right foot, release the turbocharger and burst the engine’s torque above 3000rpm, safe in the knowledge that at least one of the TT’s wheels will be in full contact with the road, which is enough to force it where you want to go.

This is how we’ve always wanted Audis to drive. Ever since the original ’80s quattro, the all-wheel grip of the sportier Audis has been scuppered by dodgy weight distribution due to longitudinal engines mounted so far forward, the radiators have had to be skewed in alongside them. People taken in by the Quattro system’s reputation are often surprised by the reality of leaden understeer and unmanageably laggy turbo response.

But this TT doesn’t just solve these issues with the more compact Haldex four-wheel-drive system and a transverse engine which minimises weight overhangs. It also has charm. Stripped of sound-deadening, the engine has a harsh, rorty edge. Alcantara everywhere gives it the cabin texture of an ’80s Group B car. As it conquers Holme Moss and eyes Wessenden Head through the gathering mist, it’s convinced me, and it’s done so on the kind of roads the fêted Ur quattro once made its own en route to WRC glory.

237bhp from the 20-valve 1.8 turbo. Not bad for a 21-year old design, no? Recaro seats ready for racing. Spoiler extension an exotic nod. This TT means business. Window down for full rort value.

As the sun sets on our epic day in the Yorkshire skyline, it’s hard not be won over by the TT QS. From unpromising beginnings, Audi managed to distil its sporting essence into this taut, ultra-concentrated package. If you’re not in the mood, it’ll punish you with its uncompromising nature. But that’s the whole point of the Audi TT Quattro Sport 8N: unlike any previous TT, it’s a car for special drives.

It’s also an absolute bargain when you bear in mind what you’re getting. The last time Audi made a short wheelbase, motorsport-inspired, four-wheel-drive sports car, it was a Group B homologation special that will now set you back a quarter of a million. The Quattro Sport might not be a Group B monster, but it finally makes good on the TT’s promise and offers a snarling, popping, full-body-workout Group B-style drive for between £6k and £10k. It’s a proper sports car all right.

THANKS Audi UK for the loan of the TT.

I bought one David Clarke

‘Once I discovered the QS, it proved irresistible,’ says David Clarke of his Misano Red example. ‘The optional Recaro seats are a must for lateral support while blasting twisty coastal B-roads. During four years of ownership I’ve had no reliability issues, apart from some sporadic ESP and ABS fault codes. It’s best suited to A and B roads, and no more than the available performance is required for that!’

Leaving Cheadle, there’s a good dollop of motorway driving on The M60, M62 and M67 before the going gets greener near Mottramin Longendale. From there we head east on the A628. This is often a busy road, and at any other time than ’three-shot coffee o’clock’ you’ll be staring at the back of many an articulated lorry. Time it just right, however, and you’ll be blessed with great views and wonderfully flowing corners. As you get to the Woodhead Resevoir, head north on the A6024, which tightens and becomes pleasantly wriggly. Go through Austonley, and then turn left on to the A635. Then head on to The wide open Wessendon Head Road, pointing towards Meltham. Then aimfor Marsden and the Bleak Hey Nook. After that join the A670 and motor on past Uppermill, turning left when you reconnect with the A635, then the A6018, and then rejoin the M57 for the run back to Cheadle. If you’re a sucker for a motoring museum, the Museum of Transport in Greater Manchester is well worth a look (gmts.co.uk)