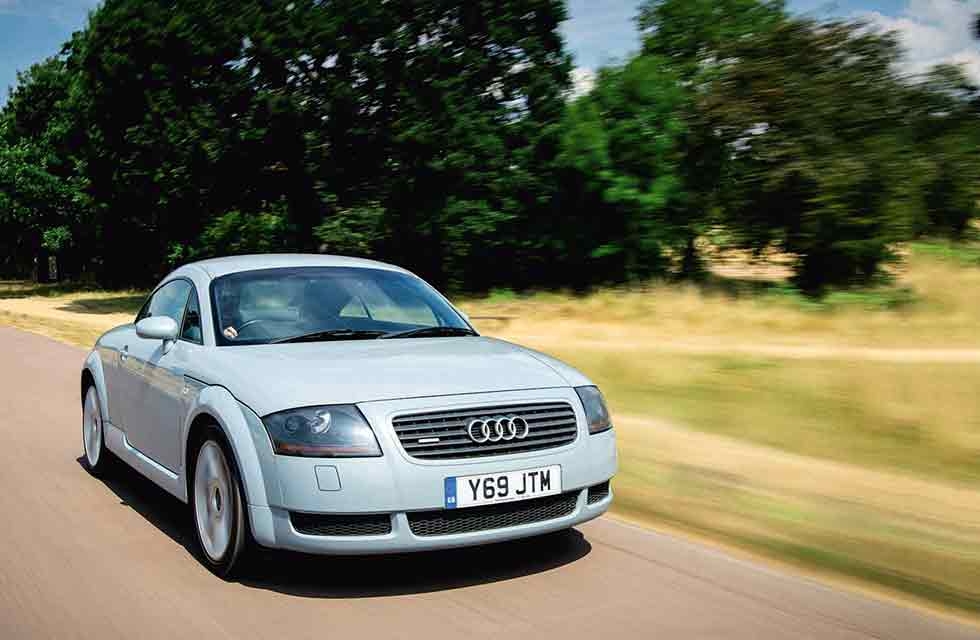 Style on trial. Stephen Bayley on Audi’s TT Golf in drag – or Bauhaus on wheels? Is the ‘Golf in drag’ Audi TT 8N really the ‘greatest expression of the Bauhaus aesthetic’? Well, it doesn’t usually pay to argue with Stephen Bayley on matters of style. Photography Paul Harmer.

Bauhaus beauty or modernist monstrosity? The car, that is

According to the poet and artist Jean Cocteau (always very sound on these matters), it is ‘for most people… a complicated way of saying very simple things. To us, it’s a very simple way of saying complicated things.’ And that is an appropriately neat description of the extremely neat Audi TT that, now 21, has come of age. For us, it is a simple proposition, but one with many layers of meaning.

Some cars transcend their original humble condition. They actually become more than a sum of their simple parts, acquiring en route the courage of their own restrictions. The Audi TT is exactly that. It could have been merely an aggregate of upcycled Golf componentry. With great ingenuity, that’s how Volkswagen created the Skoda Octavia, over which we will solemnly draw a veil.

In fact, purists originally complained that the TT was merely a Golf in high-concept drag, but this was neither more nor less than a half-truth. In 1948, car-spotters could have made the case that the Gmünd Porsche 356 was a KdF-Wagen in drag as well.

True, the weight distribution inherited from the Golf led to compromised handling, only partially alleviated by Quattro four-wheel drive. But enhanced traction led to some nasty moments on the Autobahn for the overambitious entering bends at injudicious speeds: even Audi Quattros must obey the laws of physics. And those laws led to accidents. ‘Alles Mund und keine Hose,’ they said. All mouth and no trousers. Embarrassingly, there was a recall and that fanatically neat shape was compromised by a mandatory retrofitted rear spoiler.

And then the TT evolved in that typically systematic German way with ever more commitment to ever more technology. In the current third-generation TT, the dynamic faults have been rectified. So much so that the RS version can take on an equivalently priced Porsche. But the third generation has lost the revelatory aesthetic purity of the original. Of it, J Mays, whose involvement in the design we will consider, said: ‘I respect it, but I don’t love it.’ The first-generation TT is the purest expression of the idea: to my eye, the highest expression of the car designer’s art. A masterpiece of Cocteau’s style.

It was going to be called ‘Edelweiss’, an Alpine flower that inspired a nauseatingly cloying song in Rodgers and Hammerstein’s 1959 The Sound of Music. But someone in the comms dept panicked, pressed an alarm button, and TT was chosen instead. No-one seems quite sure, but the reference seems to be to the Tourist Trophy races. And there is certainly family history here: in the 1960s, Audi’s relation NSU used ‘TT’ on fast versions of its Prinz. And an NSU motorbike had first won on the Isle of Man circuit in 1911.

In the year of the TT’s 21st birthday we mark the centenary of the Bauhaus, the most influential modern art school. And there is a connection here. ‘Art and Technology: a new unity!’ the 1919 Bauhaus manifesto declared, although in practice its workshops achieved not a lot more than a useless geometrical teapot. But the Bauhaus teaching method was radical and its influence profound.

The famous tubular steel ‘Bauhaus’ chairs by Marcel Breuer were inspired by bicycle handlebars: the school encouraged veneration of the machine and of technology. And the Bauhaus revered geometry: the school’s symbol was a cone, a sphere and a cube. Bauhaus teachers were inspired by ideas about Hauptformen going back to 19th Century pedagogy: a belief, almost religious in character, that every object has a significant form.

The last Bauhaus director was Mies van der Rohe, who tried to sell the school’s modernism to Hitler as the authentic German style: mechanical, geometrical, formal, undecorated. But the Fuhrer (who thought ‘brown is a very German colour’ and liked cuckoo clocks) was having none of it, so in 1933 Mies took off with his colleagues for America. Here he built The Illinois Institute of Technology in Chicago and The Seagram Building on Manhattan’s Park Avenue. These were the greatest expression of the Bauhaus aesthetic. At least until the 1998 Audi TT.

Success has many fathers, but failure is a bastard. And the successful TT has in the past 21 years been variously attributed to more than one designer. To achieve some clarity in the confusion, I asked car culture polymath Jurgen Lewandowski to give me a definitive ruling on the car’s author.

Jurgen told me: ‘I have asked Stefan Sielaff [now at Bentley] who was working 21 years ago at the Audi Designcenter. And Stefan explained: “When the TT was a concept and a show car, the head of design was J Mays. The exterior was done by Freeman Thomas, the interior was done by Romulus Rost [also now at Bentley]. When the decision was made that the TT would go into production, the project was handed over to Peter Schreyer [now at Kia]. He is responsible for the TT Coupé and Roadster as we know it.”’

Freeman Thomas had spent four years at Porsche before joining J Mays in Simi Valley, deeply inhaling Californian air and perhaps other vapours too, where the two of them created the 1994 Volkswagen Concept 1. This anticipated the TT concept with its pure geometry, confident, bold, clean surfaces and the number of resting ghosts it awoke. With great subtlety, Concept 1 evoked the original Beetle without, if we are serious, actually looking anything like it. Similarly, the TT is a clever and haunting reminiscence of the 1936 Auto Union Type C while, objectively, having nothing in common besides a badge comprised of four perfect circles.

We photographed the TT at The Alton Estate in Roehampton, London County Council’s post-war hommage to Le Corbusier. We did this because the TT is such an emphatically architectural proposition. At least, that is, if you find ‘architecture’ and ‘modernism’ to be synonymous. Which is to say: clarity, structural logic, that same refusal of decoration, an affection for austere effects, a narrative that speaks of purpose.

Le Corbusier is the monstre sacré of modernism, although – being a megalomaniac rather than a collectivist – he had only tangential relations with the Bauhaus. He never actually taught at the school and, in that maddening French way, dismissed it as a frivolous école d’art decoratif, weedy decorators lacking his inflexibly stern purpose. Corb, however, shared the Bauhaus reverence for machinery. A house, he once declared, is simply a machine for living in. And he was devoted to cars: handsome automobiles, mostly Voisins, were always artfully placed in the publicity photographs of his buildings. He was photographed on the pista above Fiat’s Lingotto factory. His voiture minimum project (which, he boastfully claimed, anticipated the 2CV) was, like the TT, a composition of uncompromisingly pure geometrical shapes.

Step into a 1998 TT and it feels vintage. It is tiny and cramped, especially laterally, and the driving position feels hunched and not at all contemporary. And the austerity of the interior astonishes : there are very few controls, reminding us, perhaps, of how wilfully complicated car interiors have become since 1998.

The restraint is artful: knobs and buttons and binnacles describe geometry and through half-closed eyes it is easy to imagine the grid upon which it was all designed. There is no fear of leaving a surface undecorated. Weniger aber besser. Less but better! It is impossible not to think the designer(s) thoroughly enjoyed themselves here: it is indulgent, but disciplined too. If they were asked to back off from an extreme vision, it is not obvious.

The same indulgent disciplines apply to the exterior. The wheelarches are bold semi-circles. There is no reason for this except that it looks marvellous. The reversing light, a modest circle, is beautifully integrated into the larger lens. And, as with the original 2CV, this light is assymmetrically deployed, with emphatic understatement. Cutlines are a lesson in formal composition. You imagine early proposals might have been composed not with clay, but with Froebel blocks. The sole concession to decoration is an ever-so-slightly camp fillercap, apparently sourced from a military ’plane.

I remember introducing the flamboyant socialite and interior designer Nicky Haslam to an early TT. He marvelled at the gaiter around the gearlever, concentric circles of neatly pressed rubber. He ran his fingers admiringly along the rear haunches, commenting on their purity. You cannot call this form-follows-function because that has always been a bit of a nonsense. Form, if it follows anything, follows fiction. And the fiction here concerns a design that describes the romance of driving.

One of the most significant TT owners was the architect Philip Johnson, Mies van der Rohe’s assistant on the design of The Seagram Building. It was Johnson who curated the influential 1932 exhibition at New York’s Museum of Modern Art which gave us the term ‘International Style’ to describe the architecture of Le Corbusier and Gropius. And in his pioneering MoMA car design exhibition of 1951, Johnson gave us the term ‘rolling sculpture’. He used his Audi TT to commute between his Seagram office and his famous glass house in Connecticut. Perhaps he meant ‘rolling architecture’.

Above and right You can still see the original’s proportions in the current TT, but the first generation is the purest piece of design; aircraft-style filler flap has endured, as has the name. Left and above It’s just a Golf in drag, right? Essentially, yes, but as an exercise in design, the TT 8N draws on the Teutonic spirit of the Bauhaus, which celebrates its centenary this year; it makes Bayley happy, too. Clockwise from left Audi TT in Roehampton’s appropriately Corbusian surroundings; artful interior is minimally decorated; Bayley chats with the TT’s owner, Octane’s Delwyn Mallett.