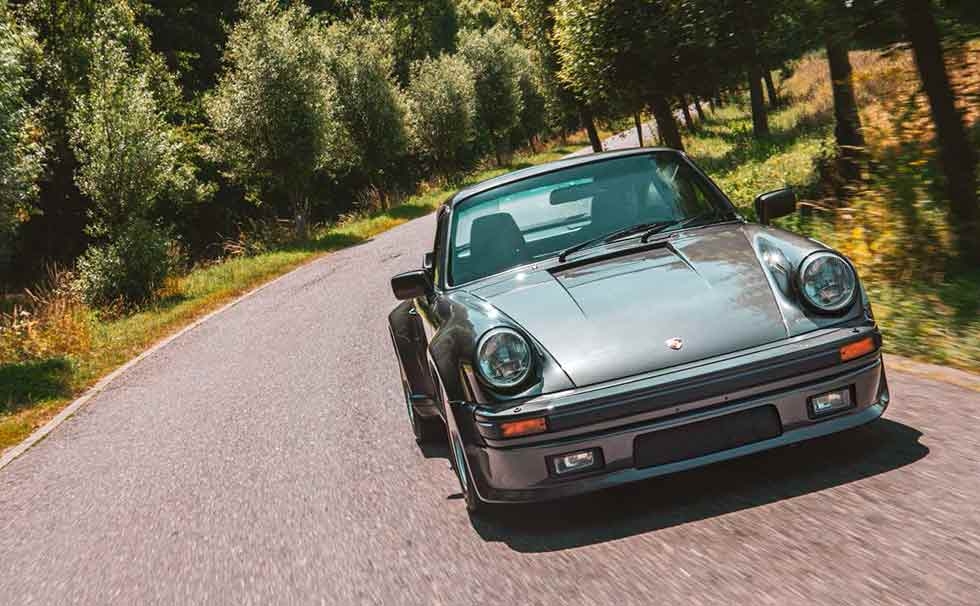 930 S: best of the early Turbo What do you know of the rare 930 S? Drive-My reveals its fascinating history. Not heard of the 930 S? It’s as rare as it is glorious, as Drive-My finds out… Written by Joe Williams. Photography by Rich Pearce.

There’s no other car quite like Porsche’s 911 Turbo. Admired for being the only true everyday supercar, the Turbo builds on the 911’s mantra for seamlessly blending practicality and performance and takes it to a whole new level, adding explosive power, striking features and cutting-edge technology into the mix. The ultimate do-it-all 911 with style and elegance in droves, the Turbo has simply always sat at the top of the tree, right from its debut in 1975.

Much like the 911 itself, the Porsche Turbo has enjoyed consistent evolution rather than all-out revolution throughout its 43-year production run, as highlighted by our ‘golden’ 930 v 991 cover feature. This is particularly so for the Turbo’s early years when it was more commonly referred to by its Typ 930 internal model designation from 1975 through to 1989. In those 14 years Porsche’s 930 evolved from a rapid if agricultural performance weapon to a rather more sophisticated supercar. It got faster, sure, but the Turbo also became more efficient and easier to drive, too.

From its more humble beginnings as a 3.0-litre, four-speed and whaletailed machine putting out 260hp in the 1970s, by the mid-1980s the 930 had morphed into a 3.3-litre, intercooled car with 300hp and, by 1989, five forward gears. The last year of 930 production is thus considered the most desirable, that five-speed ‘box making better use of the Turbo’s eruptive power.

However, evolution of the original Porsche 911 Turbo didn’t end there. For those who craved a little extra exclusivity, a touch more exuberance from their Turbo experience (and let’s face it, in the late 1980s there were many who did), Porsche had its 930 S ready to offer.

Never heard of the 930 S? Don’t worry, you’re forgiven. Few people have ever really heard of the model, and information from a host of resources, including books, is scant at best. Here’s what we know.

In the British market this was badged the 930 SE, colloquially referred to as a ‘slantnose’, aptly named and suitably appointed with the M505/506 steel front end evocative of the Motorsport department’s spectacular 935 race car. Other appointments to the SE included a Powerkit, front spoiler, sill extensions and rear intakes which fed air to the brakes. A substantial revision of the 911 Turbo, this was all the work of Porsche’s Sonderwunsch or ‘Special Wishes’ department. It offered the slantnose as an option for the 930 until 1986, when a slantnose was christened as a model in its own right to coincide with the department’s renaming to Exclusive. The SE was badged 930 S for the United States market, sold in Cabriolet, Coupe and Targa body styles from 1987.

But there’s more. As you can see, the example in our pictures doesn’t come with that famed 935-esque front end made famous by the likes of Moby Dick, retaining instead the more customary fenders with traditional, permanently upright headlights at its fore. Retaining pretty well everything else from the SE’s spec sheet, these cars were badged either LE for ‘Limited Edition’, or S, as the ultimate sign-of to Porsche’s illustrious 930 Turbo. Just 50 were made, one for each Porsche Centre of the time, with 14 right-hand-drive examples bound for the United Kingdom badged as LEs, while for the US market the car remained a 930 S. Needless to say, it is considerably rarer than the M505 flatnose 930 S iterations it shares its Stateside name with.

The current custodian of the car in our pictures is Johan Dirickx, owner of the JFD Collection. Rather more famous for his complete line-up of every RS and RSR, it takes a special 911 with forced induction to wind up in Johan’s garage, and this its the bill perfectly. Finished in PTS Slate grey, this 930 S displays many of the design hallmarks of the Turbo which UK buyers will recognise as an LE. Take note of the car’s aggressive front chin spoiler worked into a revised PU which houses that additional oil cooler, while at the rear four tailpipes are deployed instead of the 930’s standard dual side exits. A revised intercooler and tailpipes form part of the make-up of Porsche Exclusive’s Powerkit, which also consisted of a larger KKK turbocharger. The result was a hike in power output from 300 to 330hp.

You’ll notice those tri-slat rear air intakes are missing, but this is Porsche’s Special Wishes at its best: hand-made to order according to the wealth and wondrous thinking of its well-heeled customers, the original owner in this instance opted against them. Bearing in mind the understated effect Slate grey has on this Porsche 911, we think it’s a good move. That ‘McQueen’ PTS colour was what attracted Johan to this 930 S in the first place, it adding an additional layer of rarity to a car that, as a hand-built Porsche Turbo, already has its place as a very special 911 assured. Not that you’d really know it: the beauty of this car is that to the uninitiated, this could well be another normal 930 – only those in the know will be acutely aware of its extraordinary significance as the car which gloriously crowned 930 production.

Taking a seat inside the car reveals some other key deviations from stock. Lavished in fine black leather with electrically assisted seats, the later 930’s customary centre console mounted in front of the five-speed shifter has been modified, the switchgear for climate control now sitting in each corner of a much wider panel. The space left in the middle is slightly bizarre to look at, though again it forms another cornerstone of the Sonderwunsch mantra: ‘what the customer asks for, he or she will have.’ A leather Momo Cobra steering wheel sits in front of the 930’s customary VDO dials, its rim thicker than the four-spoke item usually found inside the 930 Turbo. Incidentally, the UK-bound LE cars featured a three-spoke item similar to the 1974 Carrera, albeit with a gold-plated crest at its centre.

Johan twists the key in its ignition and the 930 S flat six rumbles into life, its tone deep and gruff on idle. Doors closing with that trademark early 911 ‘clink’, we fasten our seatbelts and prepare to unleash 330hp on the countryside roads outside Antwerp. Heading out of town gives the Turbo a chance to warm up and its occupants to take stock of the car’s set-up. Its ride is brilliantly polished, riding over imperfections in the road as if they weren’t there, this without the unwanted vagueness at higher speeds which usually comes as a caveat. Glancing out either side mirror, those beautiful, bulging hips of the 930 take up most of the view, the tea tray spoiler’s rubber lip poised perfectly behind it. It’s a visually arresting sight, but backwards is not really where our vision needs to be in an early 911 Turbo.

Clear from the skyline of Belgium’s most populous city, there’s nothing but an open road ahead of us as we cruise in third gear at 2,500rpm. With little need for prompt Johan buries the accelerator pedal to the floor in third gear, and we’re of. For a split second nothing really happens of course: the rev needle merely strolls past 3,000 and then 3,500rpm, before all hell lets loose at fully four grand.

It’s as if the Turbo has been given a shock from a heart defibrillator, the Turbo’s vital signs transforming in front of us. The rev needle now rips around the last third of the tacho while the smaller boost gauge beneath it shoots from its left-leaning slumber to maximum attack at just under 1.0-bar of boost. Behind us a crescendo of noise has built into a rip-roaring whoosh as the flat six approaches maximum engine revolutions, while the release in inertia has transcended to a glowing warmth right in the pit of our stomachs. Johan reaches for fourth gear and we’re of again, repeat to fade, the sensation of the Turbo’s delivery no less alluring.

It’s not as Jekyll and Hyde as the early 3.0-litre 930, but the S is still utterly explosive and full of character in the way it serves up its power. The extra 30hp provided by the S’s Powerkit is noticeable too, it delivering a real hammer blow right up to the redline. That five-speed gearbox is better matched to the car too, its shorter ratios giving a more polished drive. Johan makes good use of second, third and fourth gears on the public road when in a four-speed 930 he’d only really need second gear, though his gear selection and throttle inputs remain considered so as not to let the early Turbo’s inherent ability to boostup mid corner rear its head.

There’s enough body roll in the corners to make this 930 very playful, and Johan is adept at dancing the car along the country roads, the brakes doing enough to bring the nose of the car down before tucking in for a turn. Eventually coming to a standstill at a set of trafic lights en route back into town, the Turbo’s quad-exit exhaust system is popping away behind us and we’re afforded a moment to take stock of the machine here making us grin so unreservedly.

An enigma to many, the 930 S marks an interesting line in the sand both as an epic swansong for the Type 930 programme, defunct for 30 years as of next year, but also as a stellar near-beginning for the Exclusive department, which still forms an integral if exuberant corner of Porsche’s VIP business today. Retaining the lines of the original some 15 years previous, the 930 S is the rarest and most glorious early Porsche 911 Turbo on the planet.

Thanks Thanks to Johan Dirickx of the JFD Collection for access to the 930 S.

“Those beautiful, bulging hips of the 930 take up most of the view”

ABOVE AND TOP Front PU houses Powerkit’s additional oil cooler, while inside, layout of climate control switchgear is unique if bizarre.  ABOVE LEFT Omission of LE-spec side air intakes means this 930 S retains its clean lines from the side. TOP 930 S features two twin exhaust outlets, rather than the one found on a standard 930.