The chaps at AMG may have struggled to find their feet when it came to developing the definitive big-power W210 following the model’s launch in the mid-1990s, but after the low-volume production six-cylinder E36 AMG in 1996 and the left-hand drive, V8-propelled E50 AMG in 1997, the arrival of the E55 AMG in 1998 signalled the availability of ballistic power and executive comfort in equal measure, not to mention tasteful styling which has weathered exceptionally well over the years. 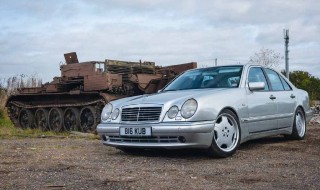 “I’m a big fan,” explains Richard Moore, owner of the super-low mileage minter we’ve come to paw over in rural Cambridgeshire. “I bought my E55 following time spent in a W210 E320 I bought as a mile-muncher back in 2008. The car was rough around the edges, but mechanically sound and remarkably comfortable. I run a business dealing in the acquisition and restoration of military hardware. The work takes me to cities in far-flung corners of eastern Europe. At least twice a month, I’d hop into the E320 at half past three in the morning before driving across the continent, arriving at my destination at dusk feeling as fresh as I did when the journey started.”

As is the case with many Mercs of the era, the dreaded tinworm took hold of the tireless workhorse. “I retired it from the road for fear of MOT failure,” sighs Richard. His concern was premature. “I ended up giving the car to a friend in need of a cheap runabout. He took great pleasure in telling me he was presented with a fresh test certificate without the need for any required remedial work. That superb E320 was subsequently put into service as a daily for a further two years!” he gasps. 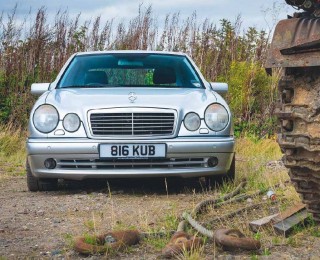 The tough six-shooter had proven its mechanical durability, but its high mileage and tatty bodywork meant it was hardly a contender for show and shine silverware. “I know the joy of owning and caring for a special car, not least of all due to my past career restoring and dealing in Jensen Interceptors,” continues Richard. “I wanted to buy a vehicle I could cherish, which is why I decided to attend a sale of classics at Anglia Car Auctions in King’s Lynn a year after parting with the E320. I hadn’t seen the list of what was being offered, and I certainly didn’t intend to return home as the owner of an E55 AMG, but that’s exactly what happened after the car I’m in possession of today rolled into view, taking its place as the very last lot of the auction.”

Offered from the director of the auction house’s personal collection, the car registered a smidge over 59k miles and was in first-class cosmetic condition. Already wowed by the W210 range from time spent driving the E320, Richard knew the three-owner, AMG-badged beauty he was looking at was a well-built car and one of the very best executive saloons money could buy when new to market as the turn of the century drew near. In contrast, he was unaware of the car’s extraordinary performance.

“I was impressed with the way the car looked and its high specification, but at the time of my purchase, I didn’t realise how much power AMG had given the E55!” he laughs, acknowledging instant access to 354bhp and 391lb/ft torque from the model’s naturally aspirated 5.4-litre V8, plus the ability to complete a dash to 62mph from rest in 5.4 seconds. These figures might not sound earth-shattering when compared to the poke of today’s performance Mercedes offerings, but at the time of its release into the wild, the E55 AMG was viewed as an exceptionally potent machine, especially when its huge size was taken into consideration. “I remember driving along stretches of dual carriageway leading from the auction house to my home. I was struck by how quick the car is, how responsive the steering and handling is and, of course, what an amazingly comfortable ride the chassis delivers.” Eat your heart out, E320! 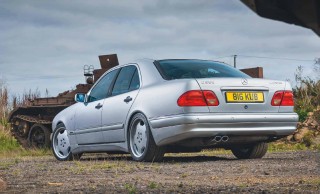 Loaded with a smooth five-speed automatic transmission and rolling on staggered AMG eighteens, Richard’s car is a late pre-facelift E55. Black leather, automatic electronic climate control, heated electrically adjustable seats and a Becker Audio 30 head unit make for a cosy cabin well-suited to long journeys, although the car’s proud owner is quick to point out this particular piece of heavy artillery hasn’t picked up where his six-cylinder W210 left off. “I’ve covered fewer than 2,500 miles in my E55 since buying it eight years ago. I’ve ensured the car’s maintenance schedule and servicing is carried out in accordance with the manufacturer’s instruction, commissioning Mercedes-Benz of Peterborough to undertake all work when required, but other than the occasional leisurely drive to Wales and outings for summer car shows, I’m the custodian of an AMG which doesn’t cover a lot of ground.” 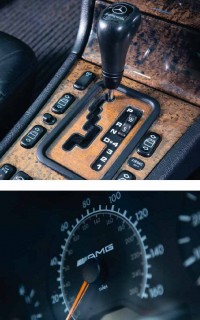 Suppressed mileage explains the maintained blemish-free condition of the car’s bodywork. Well, almost. “It’s not quite that straightforward,” says Richard. “Just like my E320, the W210 range in general suffers corrosion for fun, especially around wheel arches, wing bottoms, doors, the boot lid and spring mounts. The E55 AMG is no exception, which is why I keep mine in a temperature-controlled garage. I don’t mind admitting I wouldn’t dream of intentionally driving the car in the rain. I even think twice about hitting the road in damp conditions! My advice to anyone thinking of buying, keeping and caring for an E-Class of this age is to thoroughly inspect all known problem areas around bodywork and to make sure you have a garage or somewhere similar to keep the car dry. It won’t forgive you for being left in the open where it’s exposed to the elements.”

Despite owning his E55 AMG for almost a decade, Richard’s advice comes at the right time. After all, twenty years have passed since the launch of the W210 E55 AMG, and nothing renews interest in a model quite like a significant anniversary. The importance of the E55 in the Mercedes story is one today’s buyers – many who grew up in the late 1990s with a poster of the big V8 pinned to their bedroom wall – are rightly appreciating, a sentiment encouraging asking prices to rocket skyward, with large bags of cash being thrown at low-mileage, low owner examples.

Is Richard considering satisfying demand for clean E55s by parting with his pride and joy? “I’m undecided,” he admits. “I love the car, partly because I bought it with money I inherited after my father passed away, but also because it’s an exceptional example of an important piece of AMG history. Of course, the sensible voice inside my head tells me to sell up and buy a vehicle I’ll put to better use, but those noises are silenced as soon as I hop inside the E55 and take it for a spin. I’m instantly reminded of the car’s effortless performance!”

Close to twelve thousand W210 E55 AMGs were built during five years of production, allowing purchasers in the present to pick and choose specification and styling (pre-facelift or facelift cars) thanks to a high number of surviving examples being offered for sale at any one time. As Richard suggests, however, the W210’s enthusiasm for rust means you should approach any E55 you’re thinking about buying with caution. Don’t be afraid to pay more for an example in excellent condition with low miles, but also don’t spend too long deciding when might be the right time to buy. Top-notch E55 AMGs won’t be available at an attractive price point forever. Now, where did I put my cheque book…?! 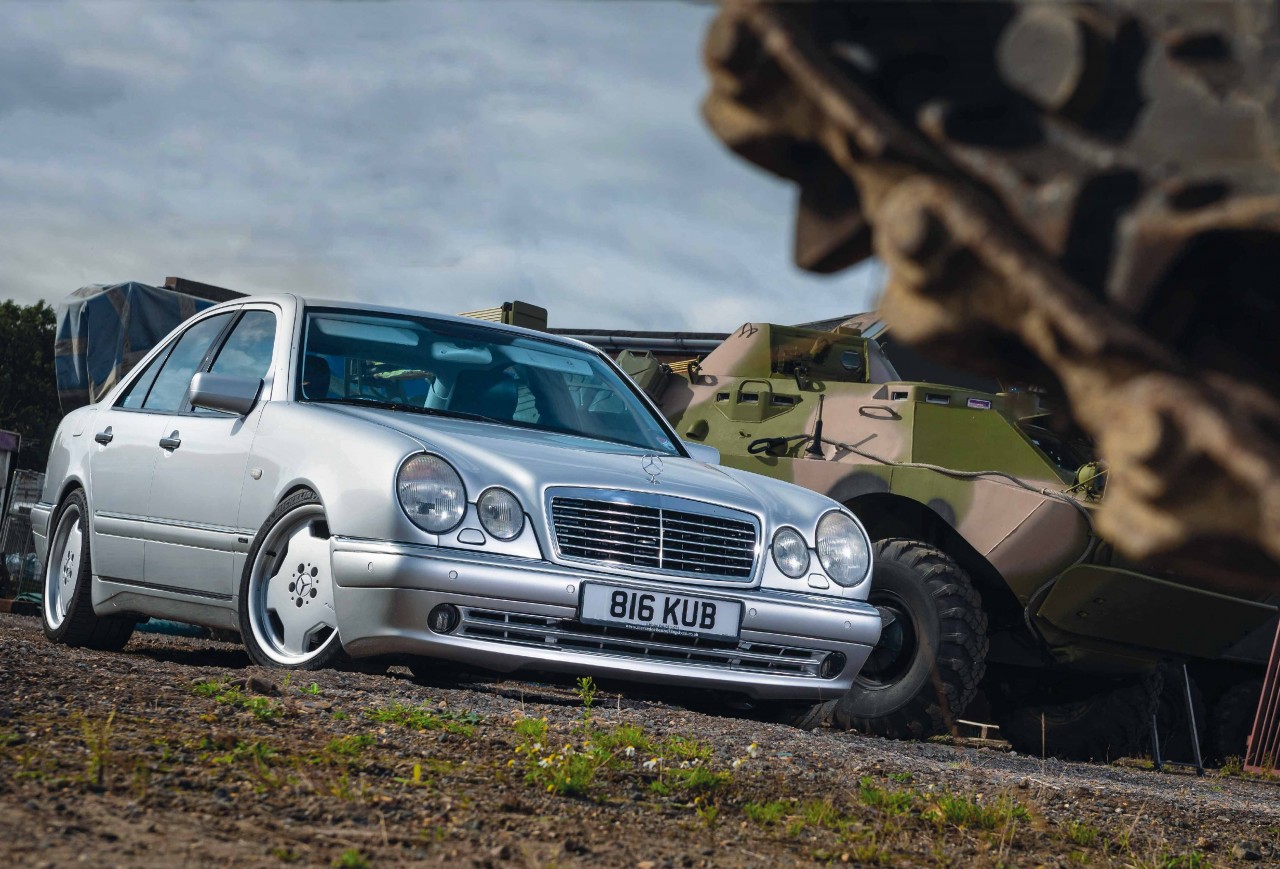 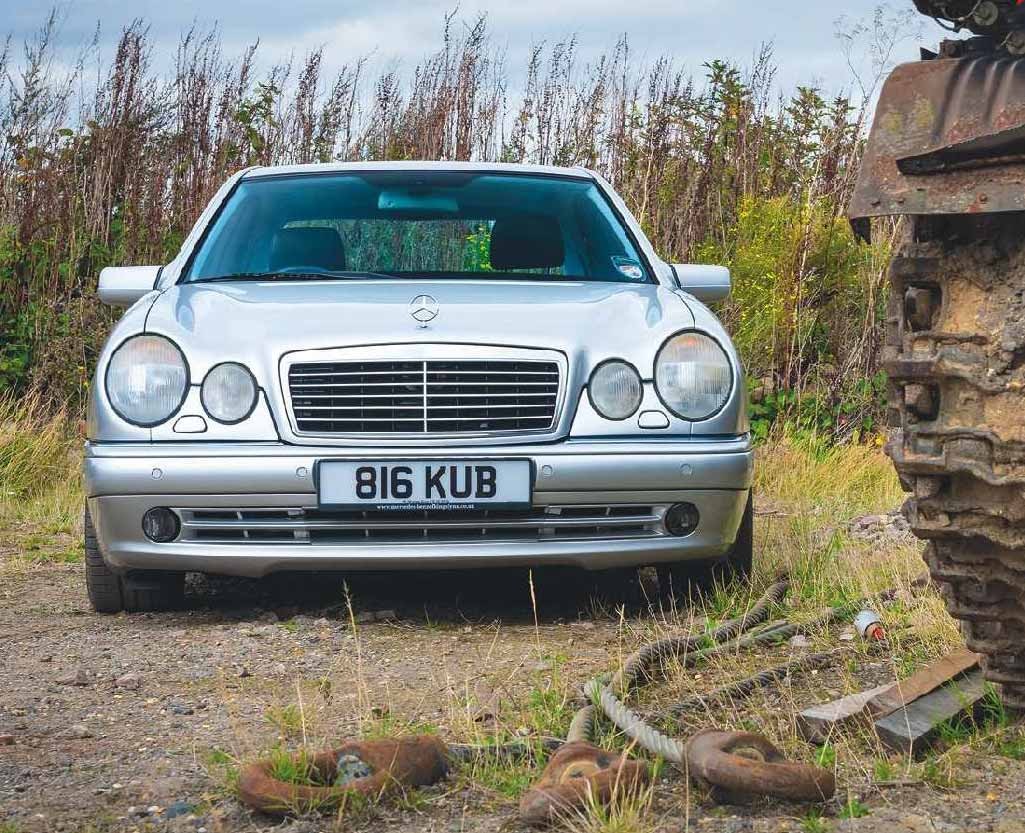 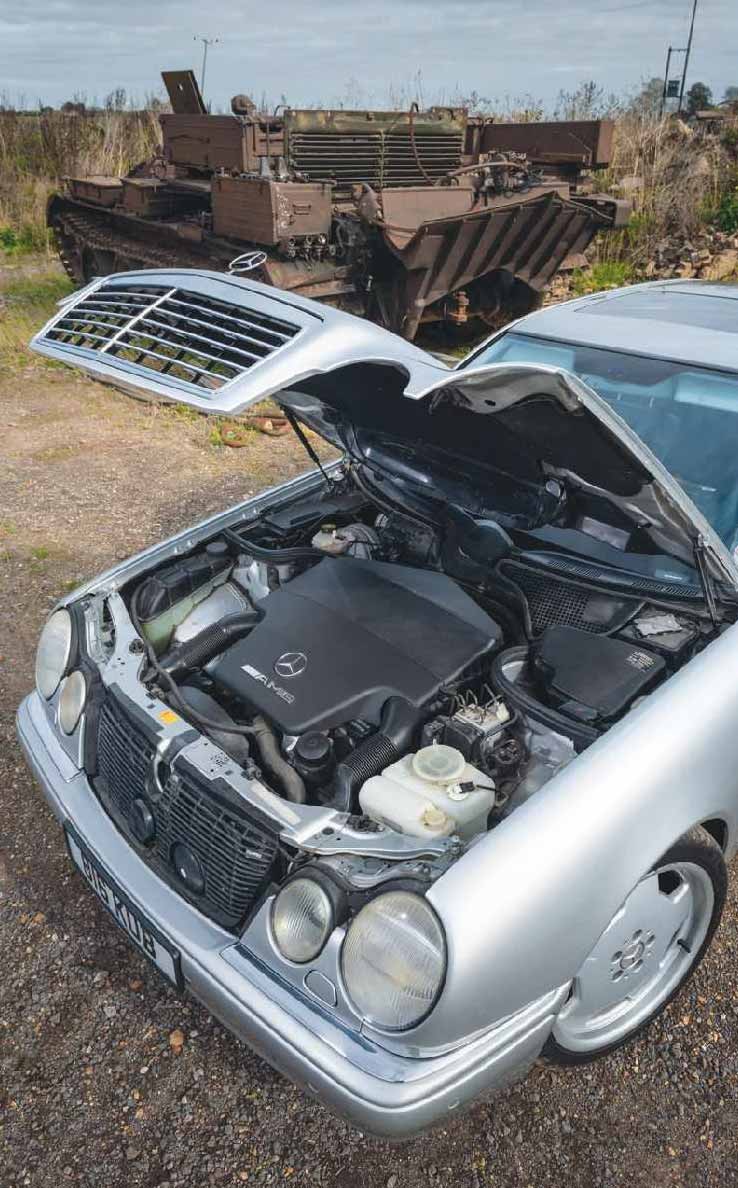 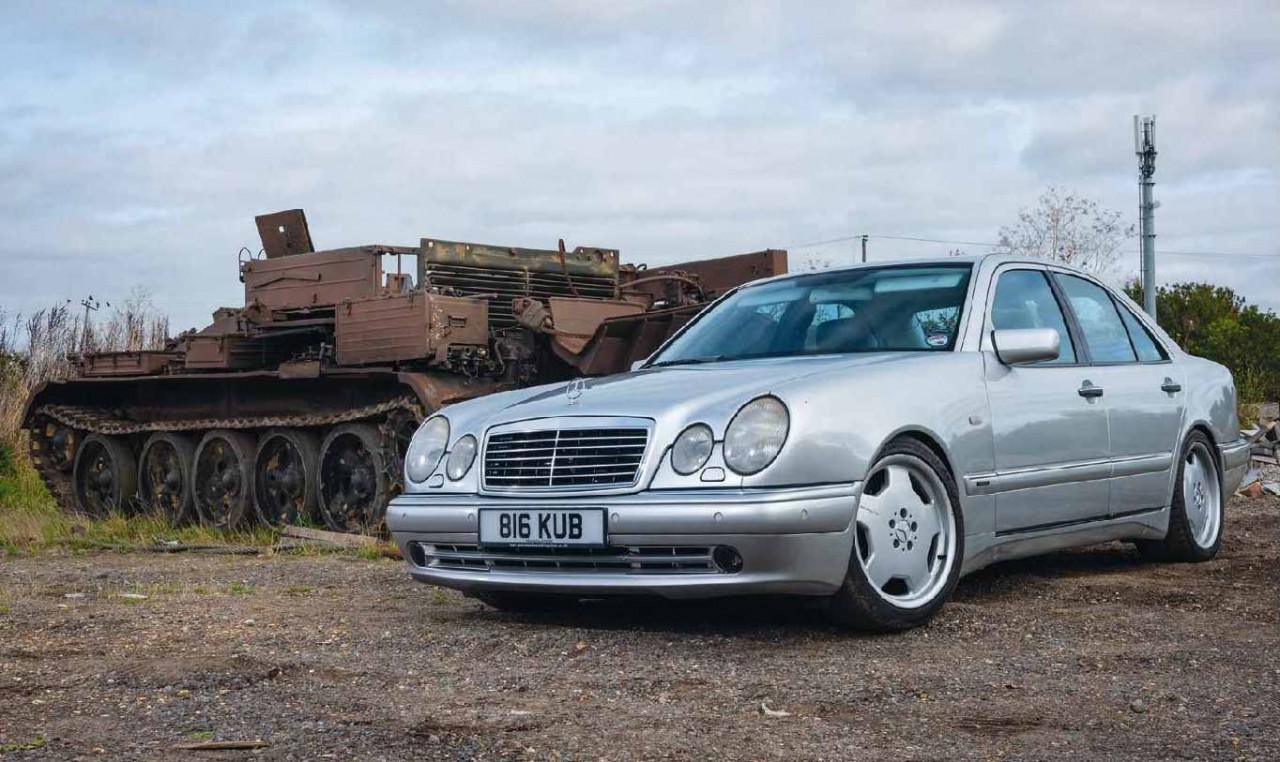 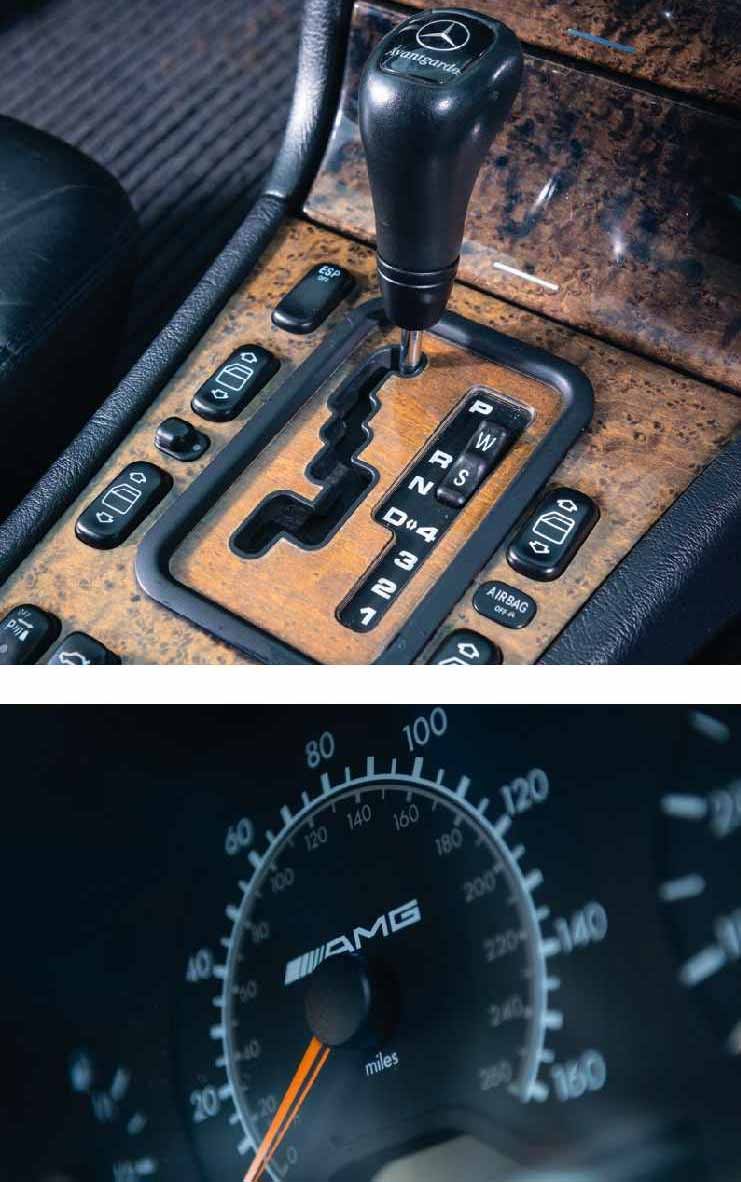 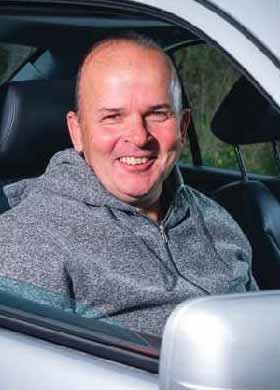 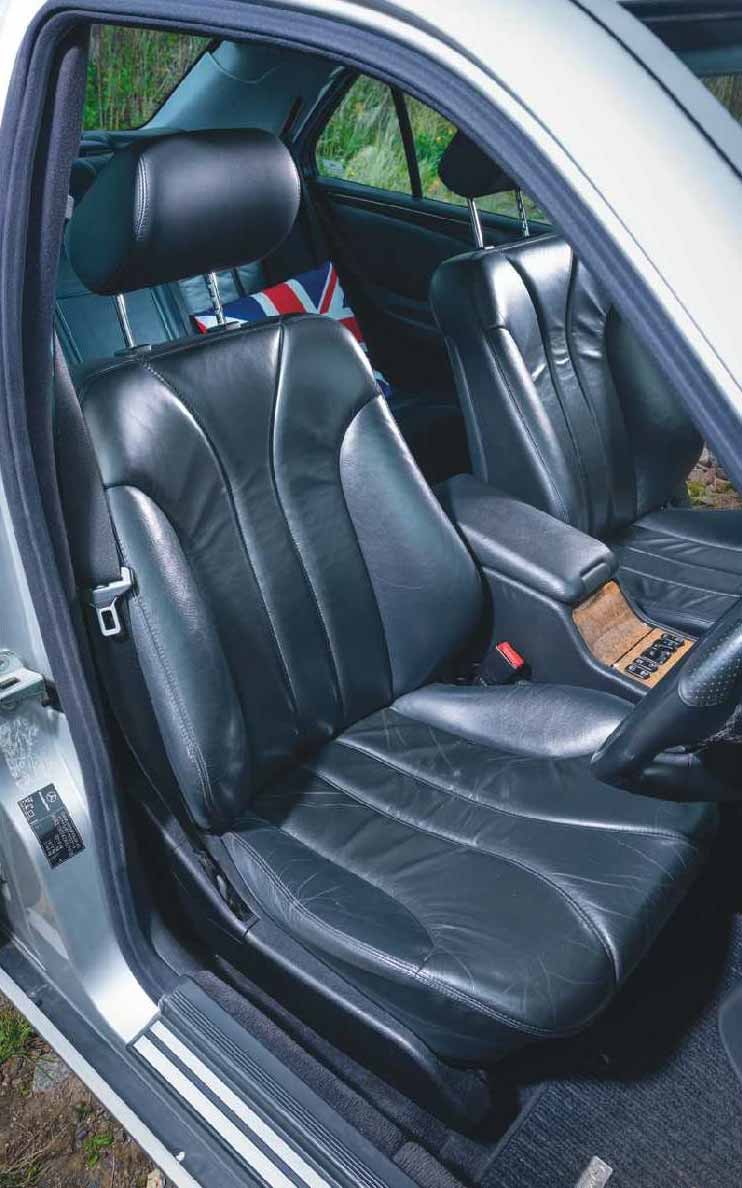 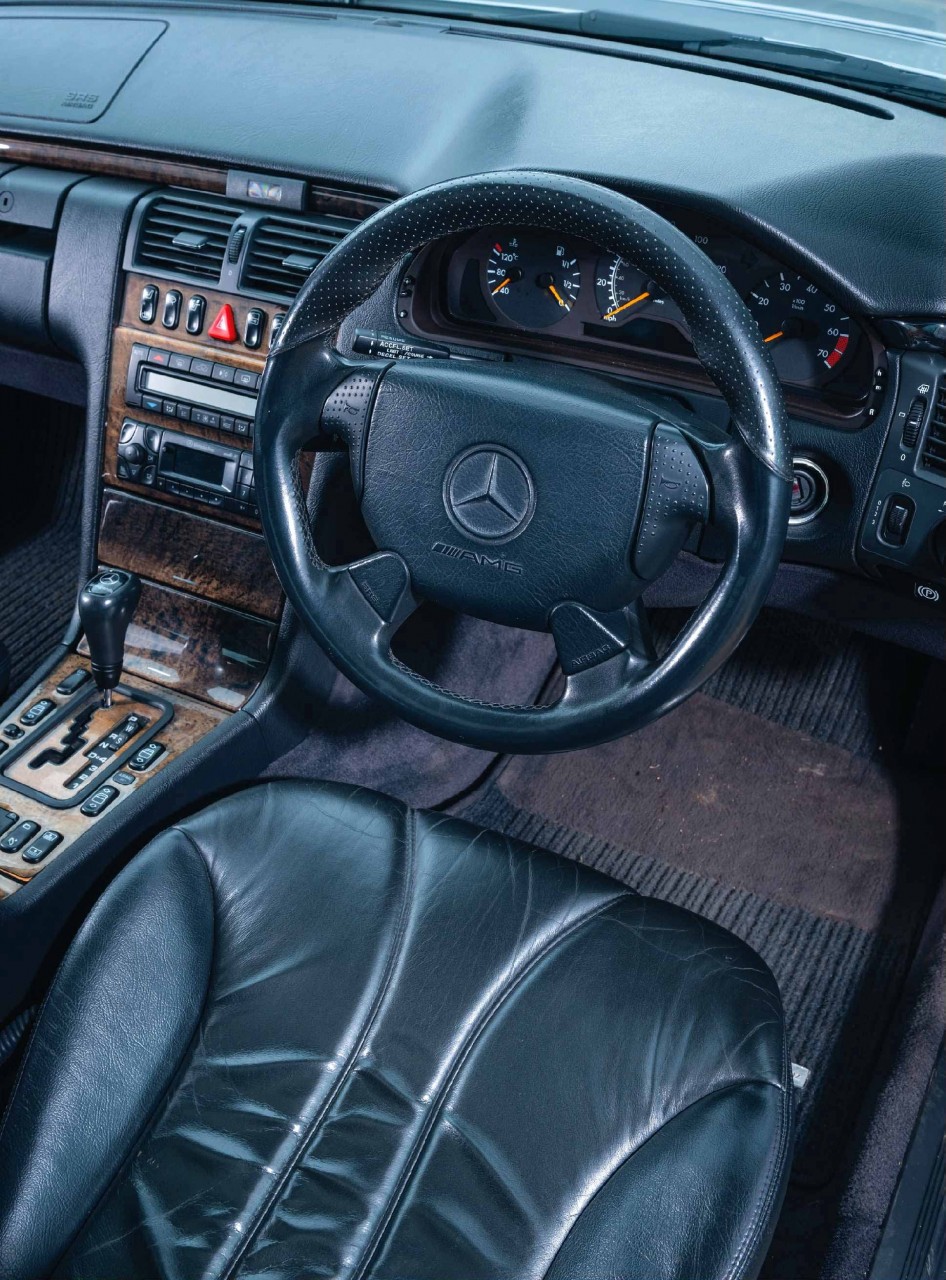 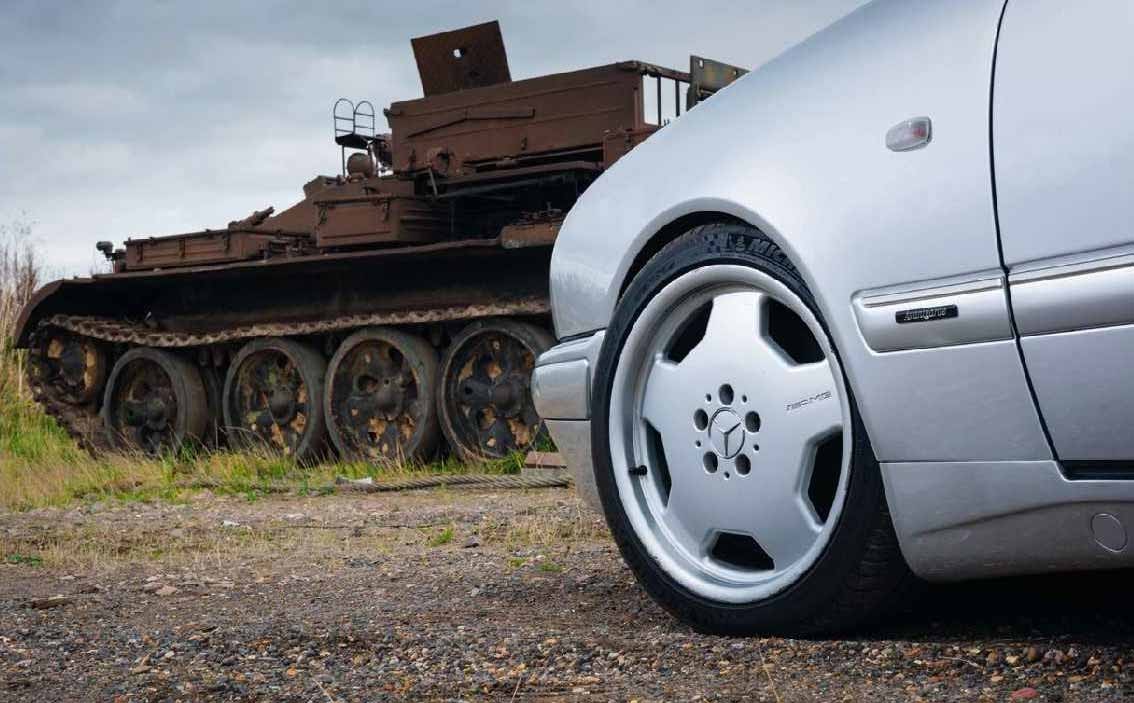 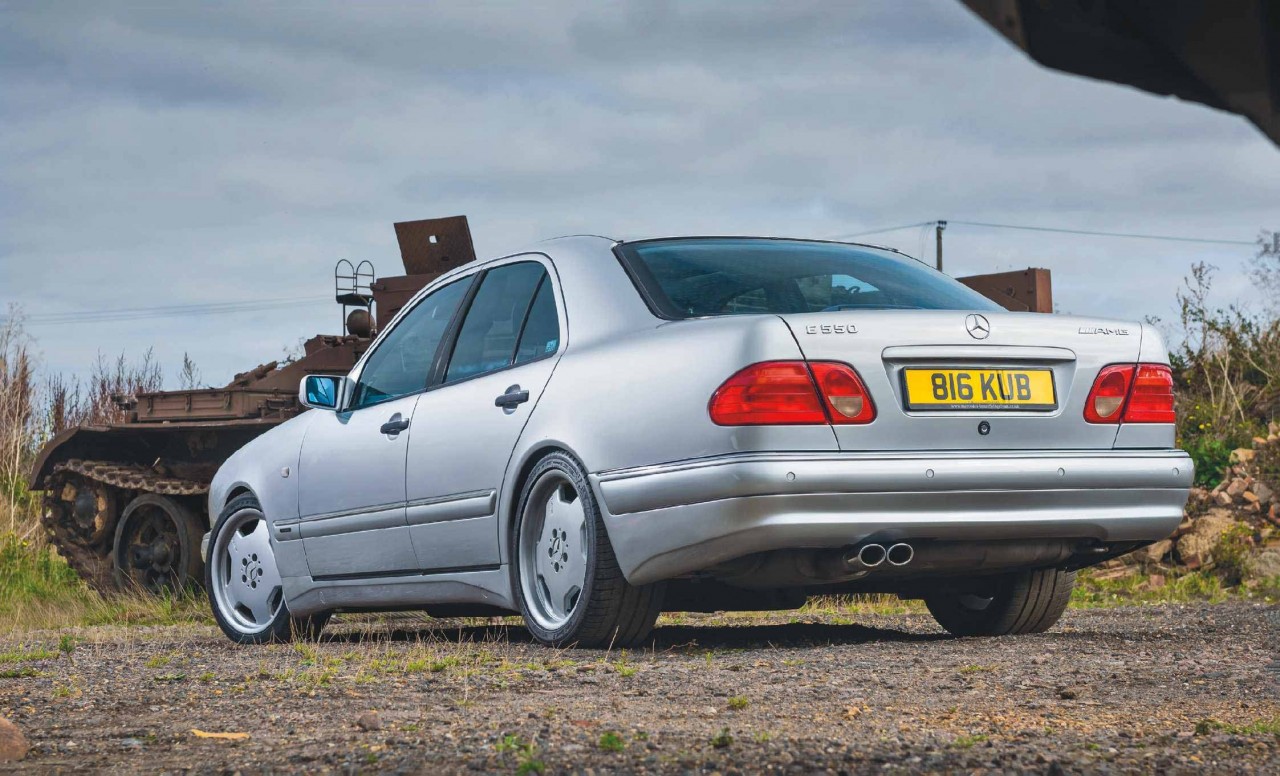 Above Despite being two decades old, the E55 AMG’s bonkers-for-the-time power ensures the mighty Merc can hold its own against modern big-power executive saloons. Facing page Pre-facelift rear end gives away the age of this particular W210 E55 AMG Below Travelling at high speed has rarely been so comfortable!

NOTHING RENEWS INTEREST IN A MODEL QUITE LIKE A SIGNIFICANT ANNIVERSARY

Worst thing about your W210 E55 AMG At first glance, the pre-facelift boot lid makes the car look like something your grandad might drive

AT THE TIME OF ITS RELEASE INTO THE WILD, THE E55 AMG WAS VIEWED AS AN EXCEPTIONALLY POTENT MACHINE

Everyone knows AMG as the high performance arm of Mercedes, but not all enthusiasts are aware of the fact AMG was founded in 1967 as an independent tuning firm. DamilerChrysler took a controlling interest in AMG shortly after the launch of the E55 AMG, becoming sole owner of the business in 2005. In 2013, it was announced Aston Martin had agreed to a technical partnership with AMG, affording the British brand access to significant Mercedes resources, thereby enabling the development of bespoke eight-cylinder powerplants and use of Mercedes electronic engine management systems in new Astons.