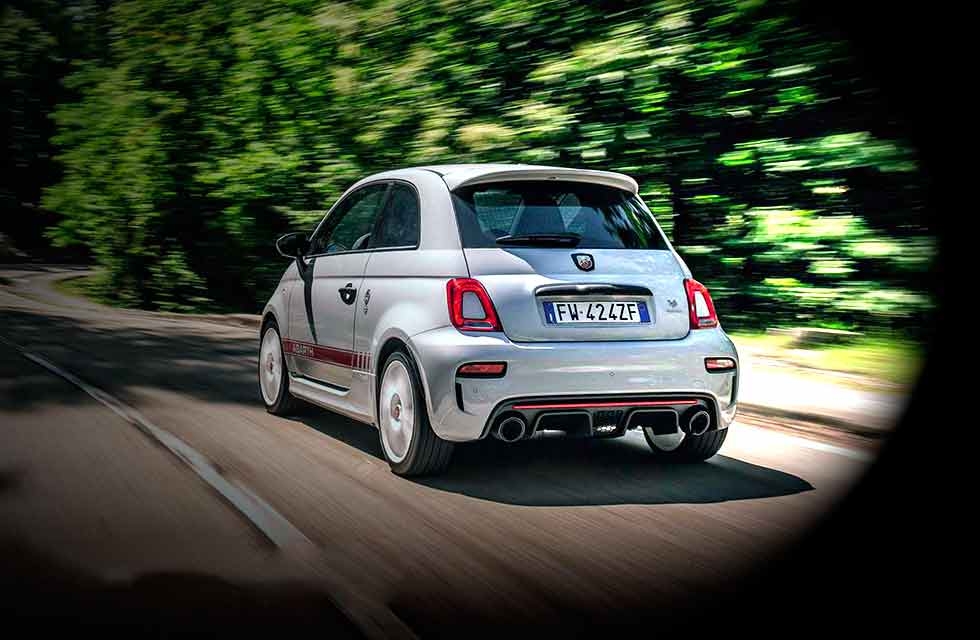 If you can forgive its shortcoming, Abarth’s pocket rocket is still riotous fun.

Tere’s something slightly lawless about driving in Turin. Wheel-spinning getaways from traffic lights? Creating your own lanes? Diving out to braaaaaap past dawdlers? Eez fine. If you don’t do it yourself then the swarthy bloke in the battered Punto behind you will, and if he’s not already coming past then the teenage girl in a decade-old Lancia Ypsilon will soon make mincemeat of both of you. Everyone just gets on with their lives, usually rapidly, in Italy’s Motown, where cars are ingrained in the culture and city cars are just that. Driving and parking an SUV here would be hellish and, you suspect, seen as a bit uncool in a place where well-worn classic 500s still roam.

This environment also makes the new 2020 Abarth 595 Esseesse – successor to the 500 Esseesse of 2009 – one of the most exotic cars on the roads, and gives you an extra few milliseconds of tolerance before the obligatory horn-lean from nearby traffic. Clad in go-faster stripes and wearing white-painted 17-inch alloy wheels, it’s an aesthetic we’re familiar with after a decade of Abarth 500 sales, but one that’s still pugnaciously appealing.

Justifying the Esseesse’s place atop the 595 range (above the basic 595, the Turismo and the Competizione) are other novelties such as Brembo front brakes, a limited-slip differential for the five-speed transmission, and a devilish Akrapovic exhaust system that now runs just a little quieter when you’re not in Sport mode, so your neighbours won t get a dose of Turinese traffic every morning.

Inside you get Sabelt ‘70’ carbonfibre-backed buckets, along with a part-leather, part-Alcantara steering wheel, a set of metal pedals and an oversized metal knob for the high-mounted shifter.

Most of the Esseesse’s parts have been seen in one form or another on other 595s, but theres no doubt they give the car a special feel and help to hide the fact the basic design is getting on a bit these days.

Some things do betray the 595 s age, though. The slightly tinny feel to the doors is just the right side of charming, but being unable to adjust the Sabelts’ backrests with the doors closed is a different matter, and adjusting the seat in such a way that results in a decent driving position is even harder.

It’ll suit some shapes better than others – as an ex-Panda 100HP owner it doesn’t bother me – but lack of adjustment in the wheel, along with pendulous pedals and the ultra-firm padding in the seats all contribute to the Venn diagram of discomfort.

You start the 178bhp turbocharged 1.4 (good for 62mph in 6.7sec and a 140mph top speed) by twisting something called a ‘key’ in an ‘ignition barrel’ but the exhaust growl that results from this archaic act goes some way to mitigating any posterial discomfort. Distracting you with brief moments of brilliance is something of a 595 speciality in fact, and objective failings can easily get swept aside by subjective silliness.

So in the interests of being thorough: The ride quality is unyieldingly firm, despite the best efforts of Koni and its frequency-selective dampers, if the 500’s roof wasn’t so tall you’d brain yourself the first time you hit a speed bump, and with a short wheelbase and torsion beam rear, every bump, dip and expansion joint affects the whole car. The steering is unlikely to please many people, being light and remote in normal mode and feeling like those old Sega Rally arcade machines in Sport, with chunky weighting and strong self-centring but no additional feedback. Road and wind noise is significant. It’s easy to catch the engine off-boost. And front-end grip is limited by the physics of a narrow track and relatively tall body.

Here’s what’s good: the Esseesse is a bundle of low-effort, high-reward fun. It’s the American Pie or The Hangover of cars, perfect for when you’re not in the mood for more cerebral entertainment.

So don’t overthink it. Brake late. Drop a gear as you blip the well-spaced throttle. Point the steering vaguely where you want the car to go and give it a nice early boot. You’ll slither around and wash wide and possibly pogo off the odd bump, but the car is narrow enough that you can take a few liberties with its dynamics. The set-up is on the safe side, with little chance of the rear end rotating if you have to back off or brake mid-turn, but this just encourages you to drive even harder. Certain UK roads would probably be the 595’s undoing, but some of Turin’s are even worse, and while the ride is rarely comfortable, the structure seems up to absorbing sustained punishment. The sticker shock is harder to absorb: £25,295 is optioned-up Fiesta ST money, so you’d have to really buy into the Abarth’s character to send your money Italy’s way.

Subtle evolution means it’s definitely a better car than the Abarth 500 launched a decade ago, but as the industry around it has become more po-faced, the 595’s brand of noisy, in-your-face thrills feels like a breath of fresh air. If you buy one, just make sure you drive it as the Italians intended…

Above left: 595’s Akrapovic exhaust previously only available on the Abarth 695 range. Left: 17-inch wheels the only size choice; matt biack is an option, though. Top: carbonfibre dash panel is an option, too