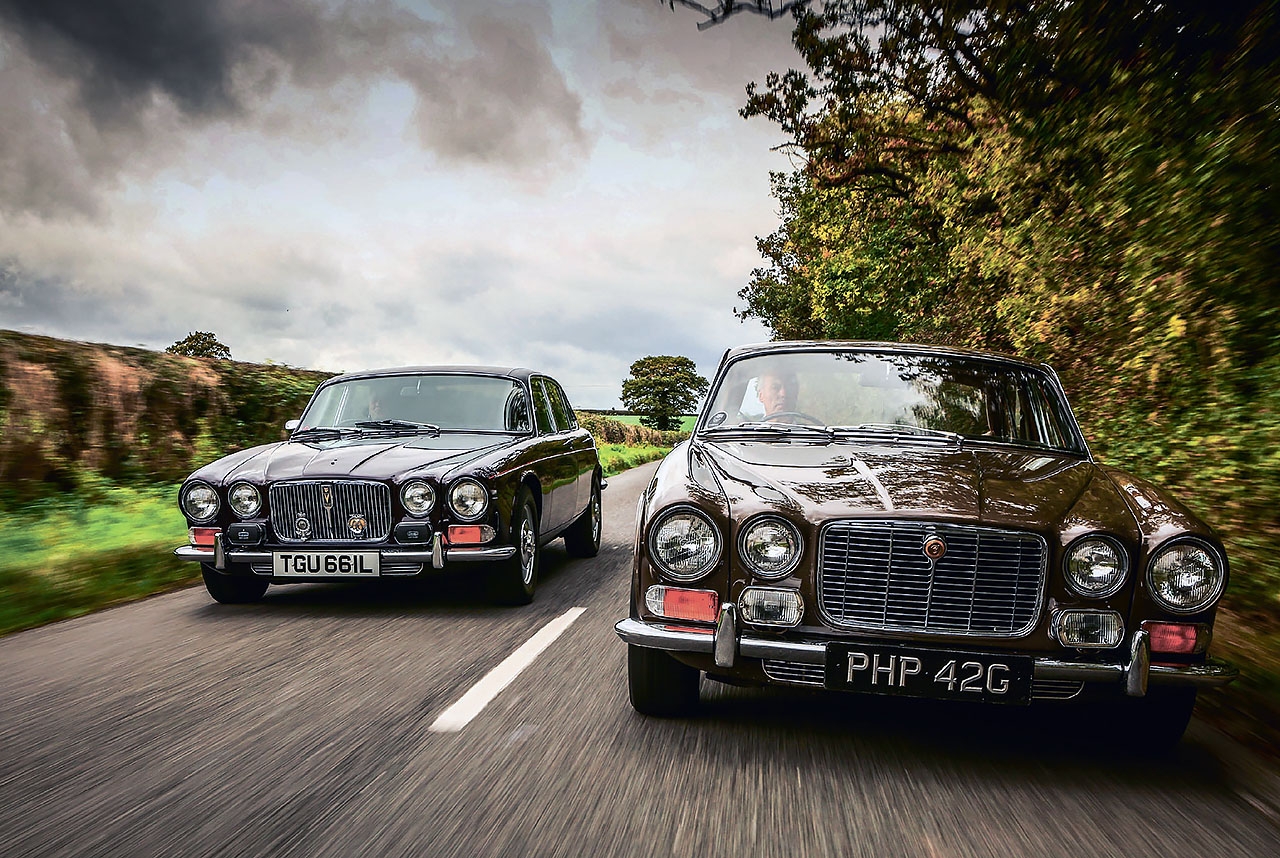 Everyone who loves saloons has a little place in their heart for the original Jaguar XJ, particularly the Series 1. These cars, the bestlooking and most refined luxury saloons you could buy when they were announced in 1968, became part of the British landscape. They were almost as evident as the luxury car of choice across society (when German opposition was largely irrelevant on Jaguar’s home ground) as the Mini and Cortina were in the family runabout classes.

At £2333 in 1968, here was an affordable aspirational status symbol for the middle classes that appealed to successful publicans and local businessmen alike, as well as national captains of industry – especially when it finally received the V12 engine that it had been designed around. You could pay twice or three times the money and not get something so supremely capable, for the XJ in its prime was a miracle of noisesupressing, cotton-wool refinement that also reconciled the conflicting requirements of ride and handling more successfully than any other car in the world. It was no wonder that, to the great frustration of Sir William Lyons, demand for the XJ far outstripped Pressed Steel’s ability to supply bodyshells for years. Ironically, it was to secure the supply of bodies for his longawaited XJ6 from BMC-controlled Pressed Steel that Lyons reluctantly gave up Jaguar’s independence in 1966.

‘BOTH OF THESE CARS JUST FLOW OVER THE ROAD, NEVER GETTING FLUSTERED OR RATTLED’

Conceived in the early 1960s as a four-door E-type ‘sports saloon’, the XJ rationalised an unwieldy range of Jaguar saloons (Mk2, S-type 420 and MkX), rendered down to a single elegant product with which to face the 1970s. This was also the most complicated and sophisticated Jaguar yet. It had absorbed four years of Browns Lane’s absurdly small development department’s time and £6 million of its budget. 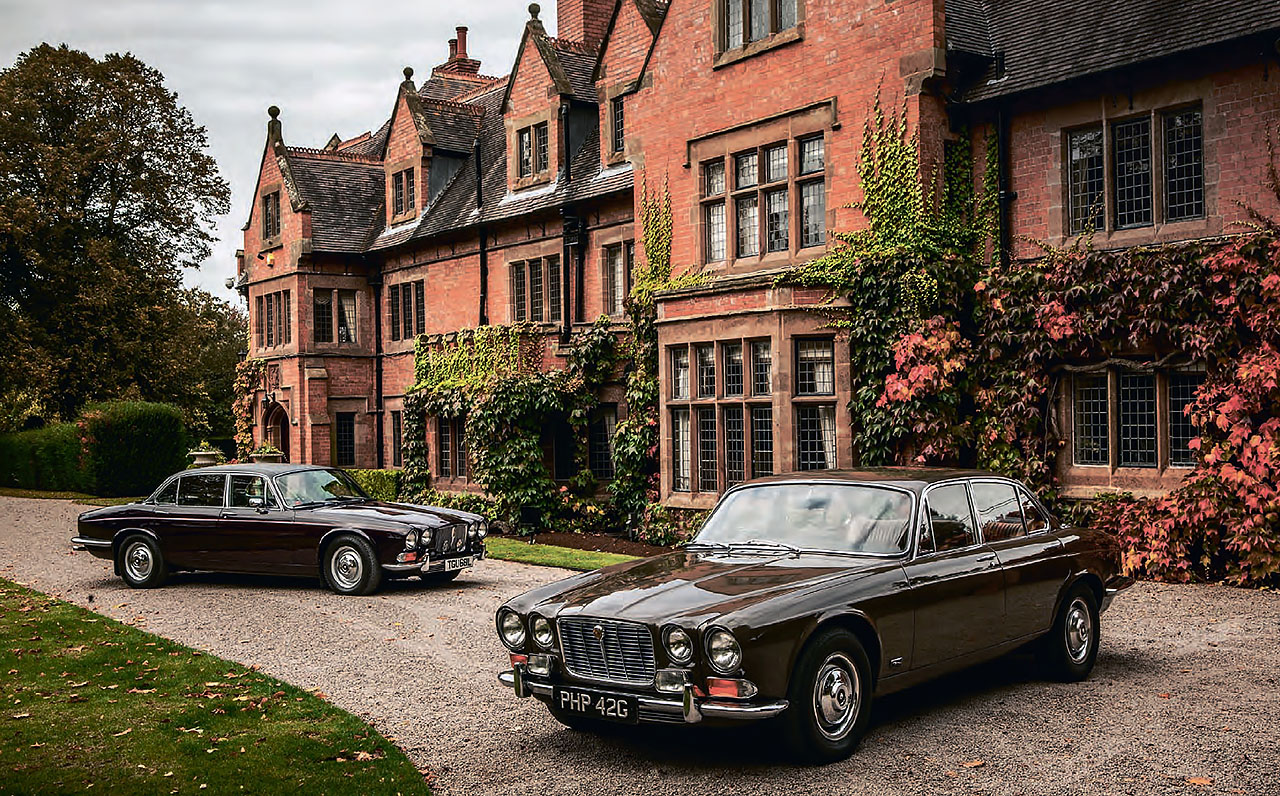 With its familiar XK powerplant, fully independent suspension and traditional furnishing, there didn’t appear to be anything especially radical or new about the XJ as a cold specification or a marketing proposal – at first glance, anyway. The magic was wrought in the way that Jaguar refined and developed all the systems that it knew worked into a new, svelte and more crash-worthy four-door saloon body that was both lighter and stronger than before.

It was also better looking, an important consideration given the mixed reception that was accorded the MkX plus the ageing style and flagging sales of the Mk2/S-type/420. The XJ was possessed of a lithe, squat look that had never been seen in a four-door production car and yet was so instantly recognisable as a Jaguar that there was no manufacturer’s name on the front. For the first time on a saloon, there was no leaper either, a victim of American safety rules.

The shape of the Jaguar XJs was in part evolved here on the gravel drive of Wappenbury Hall, William Lyon’s family home from 1937 until his death in 1985: he is buried next to his wife Greta in the local churchyard. Lyons would review full-sized styling mock-ups, invariably painted black, in the real-life environment of this imposing Victorian pile located 20 minutes from the factory. It was also the setting for many familiar press and brochure shots. Lyons farmed here as an antidote to the burdens of running a rapidly expanding business empire where even the most minor decisions were usually his alone.

Although many words have been written about this great industrialist and stylist, he still seems quite a remote figure who tended to shun personal publicity. I can picture him – tall and silver-haired in one of his immaculate blue serge suits – standing in front of his latest car in a motor show or press-launch shot. He was known to be stern but fair, a strict time-keeper but also surprisingly compassionate. Only those closest to him could probably have told you what this Blackpool lad made good was really like as a human being, but as the autocratic chairman of Britain’s most famous producer of highperformance cars he probably was a kind of genius. He was certainly a supreme businessman and final arbiter of taste who controlled every aspect of his business and was thus able to offer cars that were the best value in their class.

The featured Sable Brown automatic XJ 4.2 – with its ‘PHP’ Warwickshire numberplate – offers a direct link to the man and could certainly tell a few stories. In 1969, Lyons, given to appearing anywhere in the factory at any time to keep his workers on their toes, walked down the production line at Browns Lane and picked chassis number 1L 1370 BW at random, with specific instructions that it was not to be specially prepared in any way.

The car, the 370th right-hand-drive XJ6 produced, was handed over to Sir William that April and he used it for two years, sometimes driving it himself or using the company chauffeur. The car stayed on the Jaguar fleet until 1976 (well after the Series 2 XJ had been introduced) and was restored by the Jaguar Enthusiasts’ Club in 1994. It is now part of the Jaguar Heritage Collection.

It was the V12 engine that gave the XJ the total refinement it deserved when the model was launched in 1972 to supplement the 2.8 and 4.2 models. This was the first mass-produced 12-cylinder passenger car since the days of the American Lincoln Zephyr and was, in many ways, ludicrously over-qualified for the prevailing conditions of the early ’70s, with its 140mph top speed and 11mpg fuel consumption. It effortlessly trumped the eight-cylinder opposition in terms of smoothness and power, yet cost only £300 more than the XJ 4.2 – although neither of these facts could havebeen of much interest to the Queen Mother when Her Majesty took delivery of the featured Series 1 XJ12 in 1973.

In theory, it should have been a Daimler Double-Six given the long-term Royal links with the marque and the Queen Mother’s particular fondness for Daimlers. But this car was actually a direct replacement for her 1955 Jaguar MkVII, which she had regularly sent back to the factory for updating. Finished in her favourite Royal Claret with dark rear screen, this XJ12 was the Queen Mother’s personal car that she drove herself. It is a long-wheelbase model, and – uniquely for a Series 1 V12 Jaguar – it has the Vanden Plas interior that was normally reserved for the Sovereigns and Double-Sixes. It is a rare car anyway, because Jaguar built the Series 1 V12 for only 13 months.

Originally registered NLT 7 (the Queen Mother had a whole batch of ‘NLT’ plates on her various Rolls-Royces and Daimlers but nobody seems to know the significance of them), the Series 1 V12 lived at Clarence House until she died and was donated to the Jaguar Heritage Collection in 2002. In fact, she had expressly requested that the car should be returned to Jaguar on her death.

Chrome-rimmed instrument dials and a lack of provision for head restraints in the front seats mark out the William Lyons car as a very early XJ. It has never had a radio fitted, whereas the Queen Mother’s car sports an impressive 8-Track player. Perhaps it was on one of his trips occupying the rear seat that Lyons realised a long-wheelbase XJ was going to be essential if the car was to have true plutocrat appeal to compare with the huge Mk X/420G that would be killed off in 1970. His previous company car had, after all, been one of the rare limousine MkXs with a division.

Lyons can only have been delighted with the levels of smoothness and refinement that his engineers had achieved, outclassing even the £10,000 Mercedes 600 and Rolls-Royce Silver Shadow thanks to strong yet soft subframe mountings to tune out harshness and vibration, combined with double-skinned bulkheads to insulate the cabin from engine noise. The XJ6 and the XJ12L remain impressive even when measured by modern standards. They just flow over the road on those big tyres that were specially developed for them by Dunlop, never getting flustered or rattled. Both cars feel compact – not a word you would have used to describe them 40 years ago – a sense that is enhanced by the clear, slim-pillared views in every direction, and boast a surprisingly handy turning circle plus thrusting acceleration to get you up hills and past slower cars.

The 4.2 feels slightly lumpy only in direct comparison with the V12, which just keeps pulling in one long, velvety breath as it musters its 265bhp. Yes, the three-speed Borg-Warner automatic gearbox feels jerky and compromised now, lumbering the cars with low overall gearing and clumsy kickdown actions. And, yes, the power steering is too light – yet it is somehow an essential part of the XJ’s character and makes even low-speed manoeuvres a kind of pleasure as you paw the cars into position. Indeed, it is responsive and accurate once you get accustomed to it, for these were the first Jaguar saloons with rack-and-pinion power steering.

These were also the first Jaguar saloons in which you sat really low, secured against cornering forces in relatively slim figure-hugging seats (rather than the fat, slithery armchairs of earlier cars). Also, the centre console gives the cabin a new and modern sense of command compared with the older generation of saloons with their column-change automatic quadrants. The delicate steering wheel and handsome array of switchgear (much prettier than the Series II with its ugly plastic vents and ‘rational’ column stalks) gives this early XJ a pleasing link to the older saloons.

But in all other respects, these cars marked a new era of stability, comfort and driving relaxation and, in my view, form the most important single series that Jaguar ever built, the fully matured products of a train of thought that had started 30 years before with the first of the SS Jaguar 2½ and 3½ litres. Even the famously reticent company founder, who retired to this Warwickshire country retreat in 1972, admitted that the XJs were his proudest achievement.

Think of them like this: these were not only the last products of Jaguar Cars Ltd as an independent company before it became embroiled in – and was almost subsumed by – the chaos of the British Leyland debacle, they were also the last purely William Lyons Jaguars. Through three series, the six- and 12-cylinder XJs saw Jaguar through the trauma of the BL years and bolstered its reputation into the reprivatised 1980s and beyond – although they had originally been designed for only a seven-year life expectancy. Who would have predicted that the Series 3 XJ12 would still be in production as late as 1990, pitched against all manner of German and Japanese techno-statements?

Although these original saloons inspired the XJ-S and went on to inform all variants of XJ40 and X300, there’s no doubt that Jaguar styling lost its way after the departure of Sir William Lyons. Even today’s Jaguars – better built, more usable, but really from a different world – have arguably yet to recapture the elegance of the Series 1 XJ.

Thanks to Tony O’Keeffe of Jaguar Heritage, and the owners of Wappenbury Hall.