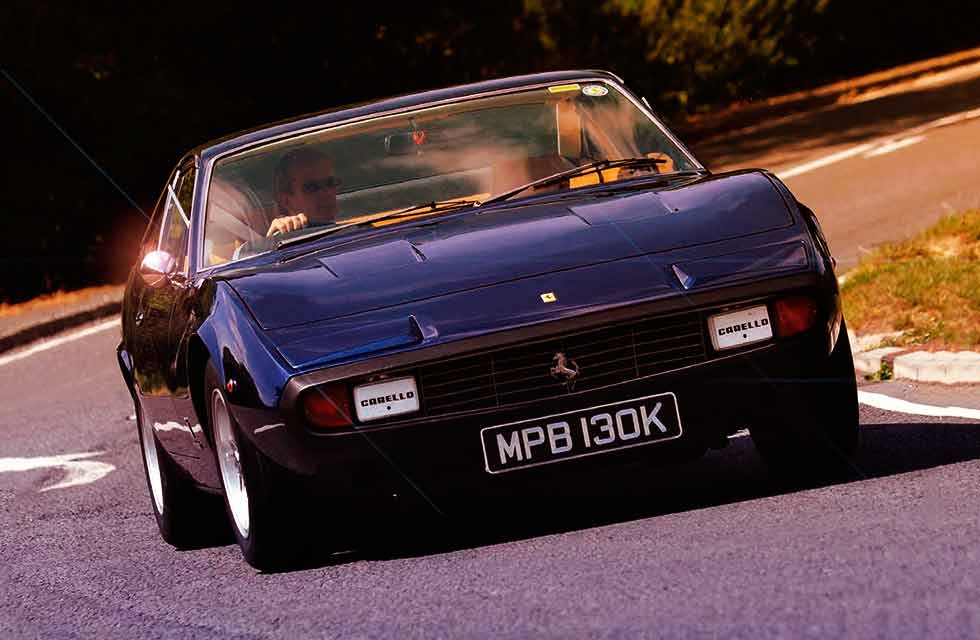 Ferrari 365 GTC/4 Driving the ‘half-price’ Daytona 2+2 Four the Love of It Ferrari’s early 1970s four-seat GT may lack competition allure but it’s understated, underrated and great to drive. Think of the rare 365 GTC/4 as a Daytona with double the seats but half the price… Story by Chris Rees. Images by Michael Ward.

In its 50th anniversary year, it’s no surprise that Ferrari’s 365 GTB/4 ‘Daytona’ has taken a lot of limelight in the world’s press during 2018. But I’m here to shine a beam on a car that very much hides in the Daytona’s shadow – its sister model, the 365 GTC/4 – and argue its cause. I reckon it’s an underrated, understated beauty that deserves far greater appreciation.

Don’t get me wrong, I’m a big fan of the Daytona – how it looks, how it drives, how it feels to sit in – and I’m in no doubt about how thoroughly deserved its iconic status is. The fact that the GTB/4 had a successful racing career is always going to give it extra kudos, too. So why should anyone look at the GTC/4, which was effectively a flabby four-seater iteration of the GTB/4? I hope I can persuade you.

The 365 GTC/4 was launched in 1971, and took a quite different approach to the car it replaced, the 365 GT 2+2 (which we featured in the August 2018 issue of Drive-My). In contrast to the lumbering ‘Queen Mary’ 2+2, Ferrari’s new four-seater was much more compact. Its 2500mm wheelbase was substantially shorter than the 2+2’s, but having 100mm extra wheelbase than the Daytona allowed two extra small seats to be squeezed in the rear.

The GTC/4 was styled by Pininfarina, which also constructed the bodywork and trimmed it, before it sent the part-finished car to Maranello for the mechanical components to be fitted. Most of the bodywork is steel, with only the bonnet and boot lid in aluminium. OK, Pininfarina’s design may not slot into history as an iconic shape in the way that the Daytona does, yet I’ve spoken to countless enthusiasts who actually prefer the GTC/4’s subtly lithe lines.

This is a sophisticated and elegant shape that rewards extended appreciation. The pointy nose features pop-up twin headlights – that 1970s ‘must have’ feature – to keep it clean and very low. Perhaps the car’s most controversial feature is its black rubber front bumper; this can look odd with certain paint schemes but it works best with dark colours such as this example’s metallic blue. From the wedgy front end, the smooth-sided body undulates, exaggerated by a teardrop-shaped glasshouse and slender fastback rear end, culminating in a neatly cut-off Kamm tail. Classic triple rear lights nestle above a plain matt black bumper. Keeping the Daytona vibe going, the five-spoke alloys with knock-off spinners on Rudge hubs look just right.

Step inside and the positive impressions continue.

The dashboard is a pleasing mélange of 1970s grand tourer and aircraft cockpit. The bare metal finish for the centre console has a certain period charm, while the leather seats are firm yet comfortable. The rear seats are just about big enough for kids and can be folded down to create a luggage area. And what’s this – electric windows and air conditioning? In the heat of our 2018 summer, yes please.

How about the way it drives? In some ways, it actually feels better than a Daytona. For a start, there is a bigger glass area and you sit a little higher, so visibility is excellent, accompanied by a light, airy feeling to the whole cabin.

The heart of any Ferrari of this era is its V12 engine – in this case the classic 4.4-litre unit with six Weber carbs. This was detuned very slightly compared to the 365 GTB/4 (340hp versus 352hp). The differences to the Daytona powerplant include dry sump lubrication (rather than wet sump), different cylinder heads and side-draught carbs (rather than down-draught) to reduce the bonnet height.

Peak power arrives lower down the rev range than the Daytona, keeping the engine more tractable at low speeds. Indeed, there’s very strong torque at low revs, accompanied by a satisfyingly deep exhaust burble. But the V12 is still capable of exceeding 7000rpm, and when you extend it towards its max, the throaty howl that builds relentlessly is unmistakably luscious.

The gear lever nestles in a conventional five-speed gate with none of the exposed metal that typified Ferraris of this era. Despite the long throw between gears, it’s surprisingly easy to shift, with a positive, weighty heft to the lever action, while the clutch pedal is beefy but not too heavy.

The suspension marks a good compromise between ride and handling. As with several grand touring Ferraris of this era, it has self-levelling rear suspension to keep the ride both level and comfy. Having power assistance for the steering is a huge boon for low-speed manoeuvring, aided by being fairly low-geared. Luckily it loads up feelsomely as you apply lock in corners, and isn’t over-light. Directional stability is excellent, and in bends the mild initial understeer gives you plenty of confidence to push on. Being more enthusiastic in corners, you can induce oversteer, but since this is a fundamentally well-balanced car (with virtually equal weight distribution front to rear), it’s a cinch to control.

The GTC/4 had a relatively short production run, from 1971 to 1972, during which time only 500 examples were built. This particular example is a 1972 car, one of just 31 original UK-supplied GTC/4s (of which a mere 20 are thought to remain on British roads). It’s up for sale at Rardley Motors of Surrey, and the price of £279,990 looks like a bargain – less than half what an equivalent Daytona would cost. As ever with Ferraris, four-seaters offer the best value.

Its deep blue metallic paint, tan hide upholstery and dark blue carpets work sybaritically well together. It was not originally blue, though. Ordered by Maranello Concessionaires in January 1972, the selected colour was Grigio Le Sancy (named after a thoroughbred race horse) with blue hide and light blue carpets. Its first owner was Simon Agace (of the estate agents, Mann & Company), who paid £9486.98 for it and took delivery in July 1972.

He covered 16,000 miles in it in its first year, during which time the warranty work apparently included a transaxle rebuild! The car was sold, along with his brother’s Ferrari Daytona, after company cutbacks due to the oil crisis. In 1974, it was bought by the 11th Baronet of Loton Park in Shropshire, whose 1349 metre-long drive is one of the UK’s longest hillclimb courses. By 1978, with 43,800 miles on the clock, it was owned for 20 years by the same man, who got marque specialist, John Etheridge of Watford, to maintain it. Its next owner bought it in 1998 via Etheridge for £32,500 and undertook a full restoration. Every nut and bolt was removed and everything was either rebuilt or replaced, a job that took some seven years to complete. In 2007, it deservedly won a trophy from the Ferrari Owners Club as the best pre-1975 car. Mike Wheeler of Rardley says: “Without doubt this is one of, if not the most, meticulously detailed cars and histories I have ever seen. We have also been able to check and verify that all numbers match.”

Mike also tells us that the specialist and GTC/4 owner, Miles Wilkins, is currently researching a book on the GTC/4: “A road test for the book carried out at Millbrook gave a genuine 155mph with a fifth wheel attached and 1000rpm still to go. Miles believes that the GTC/4’s superior aerodynamics to the Daytona and better attitude – the self-levelling rear suspension keeps the tail up under hard acceleration, reducing underbody turbulence – help reduce the power and weight advantages of the Daytona. John Surtees, who owned a GTC/4 new, rated it as one of the best, if not Ferrari’s best, road cars. Praise indeed.”

As for this car’s original owner, Simon Agace, he was quoted as saying: “I had two small children and they happily got in the back. I did some long runs to the south of France before there were speed limits, so it was run in carefully. At 120-130 [mph], it purred and you could hear the radio and the air con was good. The lighter steering was a big asset. The Daytona was too heavy for general driving and parking.”

That sums up the appeal of the GTC/4 perfectly, and why it deserves your attention, even next to the overshadowingly mighty Daytona. The GTC/4 is an eminently usable, enjoyable classic. It’s a ‘go to events’ kind of car, perfect for taking the family to Goodwood. It benefits from being an unshowy machine, and it offers far, far keener value than a Daytona. Personally, I like to think of it as an understated gateway to the world of classic Ferrari V12s: just lovely.