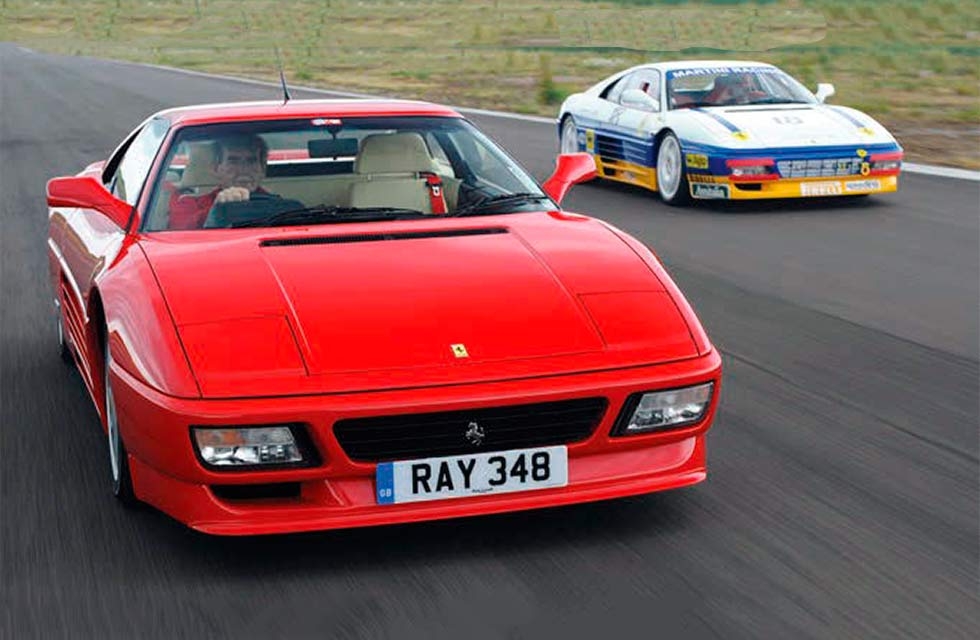 Eight is great. The unfairly maligned 348 in road and race form Forget everything negative you’ve ever heard about the Ferrari 348 and be prepared for a very pleasant surprise – that’s the message from two evangelical owners of 348s, both road and race. Story by Richard Heseltine. Photography by Michael Ward.

FERRARI 348: FORGET EVERYTHING YOU’VE EVER HEARD

In Ferrari marque lore, the 348 languished for years in a netherworld between used car status and classic-dom. Purists railed that it lacked the aesthetic purity of the 328 that it replaced, while others carped about its lack of dynamic ability compared to the F355 it spawned. Even company supremo Luca di Montezemelo went on record at the launch of the 360 Modena in 1999, saying: “Ferrari won’t be making any more mistakes like the 348.” Ouch. In so many ways, and on so many levels, the 348 was on to a loser the moment it broke cover 29 years ago. That’s one version of history. The thing is, it was well received at the time, for the all brickbats that have been levelled at it since. What’s more, the 348 in its many guises is beginning to garner quite the retinue. There are fans – quite a few of them, in fact. It is that rarest of things – an underrated Ferrari. Though never held in the wider public’s affections in the same way as the 308/328, the 348 was a commercially successful model that helped Ferrari weather the early 1990s global recession. Announced at the 1989 Frankfurt Motor Show, it represented a major departure from preceding Maranello supercars, in that there was a universal homologated specification rather than endless detail changes between versions sold in different countries.

Distinct from earlier V8 Ferraris, the 348 did away with the usual Ferrari practice of using a tubular steel chassis, in its place a pressed steel item with a tubular engine subframe. It also had its 3.4-litre ‘Tipo F119D’ unit sited longitudinally rather transversely for a truly competition-inspired layout (much like its F40 big brother). A development of the outgoing 328’s enduring Franco Rocchi-conceived engine, its power output was increased to 300hp at a dizzying 7200rpm. The gearbox was mounted transversely to the rear of the engine. Ferrari claimed a top speed of 165mph, with the 0-60mph dash taking a mere 5.5 seconds. That was seriously quick for the period. By means of comparison, its Testarossa big brother was purportedly capable of 0-60mph in 5.2sec before topping out at 180mph.

For some, the sticking point was – and remains – the styling. Clearly inspired by the Testarossa, not least its slatted side strakes, the 348’s outline was predictably the work of Pininfarina. It was also the Turin styling house’s second stab, its first attempt having been rejected. Bodied in steel (save for the aluminium bonnet and boot, plus glassfibre front and rear bumpers), build quality was markedly improved over previous models. Offered in closed form (TB for Transversale Berlinetta) or with a lift-out roof panel (TS for Transversale Spider), both models were replaced by the GTB and GTS versions respectively from late 1993, which boasted an extra 20hp and styling revisions inline with sister models such as the 512 TR. Rarest of all was the Zagato-customised Elaborazione edition, just 12 of which were made of the envisaged 20 cars, with styling revisions that teetered on vulgarity.

The 348 has long been a victim of maulings by magazines that should know better; the same ones that showered it with praise in period but have since developed selective amnesia. Autocar, for example, stacked the 348 against three rivals – Honda NSX, Porsche 911 Turbo and Lotus Esprit – on a road trip to Le Mans. Once in France, it found: “It’s the Honda’s body control and its meaty yet beautifully positive steering that allows it to feel so natural through the Esses of Le Mans… In the 348 you’ve got the same degree of body control, the same iron tautness through the corners, but the steering – lighter than the Honda’s but with much more feedback – lifts it clear of even the mighty NSX at La Sarthe.”

The oft-highly critical Car meanwhile, gushed forth: “There is nothing like [the 348]. It communicates so richly, involves you so completely. And, when you have finished driving it, cocooned in that exquisite cockpit, you can get out and feast your eyes on one of the loveliest cars ever designed.” Stateside, the late great Phil Hill was more circumspect when he wrote in Road & Track: “When I went out in the 348 at Fiorano, I was warned to be careful because the tyres (Bridgestones in this case) were brand new. I noticed a certain tendency to oversteer, but wrote that off to the new tyres… The fanfare surrounding the 348 is justified.” The 348 hasn’t completely outrun its haters, but those that love the model really love it. And none more so than Ray Ferguson and Ian Sterling. The old friends and sometime on-track rivals are fervent Ferrari fans with a particular penchant for the 348 in particular.

What’s more, there’s plenty of overlap in their ownership histories. Stories are being told the long way around as we wait for the rain to clear, neither man being what you might call ‘precious’ about their cars. Ferguson has every reason to be, however, as his 348 TS is about as close to perfect as you can get. What’s more, he has owned it twice. Not only that, he also used to own Sterling’s race car, as he recalls: “I bought ‘RAY 348’ – my first Ferrari – in 1990. I convinced my wife to let me spend the tax money, VAT money and part-exchange my Porsche for it on the basis that if she said I had to sell it to put money back into the business, I would do so without moaning! As soon as I got the car I was hooked. I worked days, nights, evenings and weekends to pay it all off and the rest is history. I’ve been hooked ever since.

“It was followed by 348 Challenge car, but then I missed my road car so much that a friend of mine, who was very ill, persuaded me to buy his 348 TS. I then bought a left-hand drive 348 GTB from Germany and had it converted to a race car which I raced in the Auto Italia racing series so, all told, I’ve had four of them.” Ferguson’s competitive instincts also stretch beyond his trackside forays. “I campaigned it for 10 years,” he says. “It was used for high days, holidays and so on. I also raced it a couple of times. I then decided to enter it in the Ferrari Owners’ Club and Autoglym concours events. I really wanted to win the FOC Car of the Show award, which took me five years to achieve. During this period, I just used to drive it to and from competitions. After that, I sold it to a dentist in West Bromwich. I only let him have it because he wanted it for his collection and I couldn’t do anything more with it concours-wise. A decade later, I came across the dentist at a car show and asked him about ‘my’ car. He mentioned it was for sale. It turned out that he hadn’t even started the engine for five years. The 348 was still in perfect condition so I bought it back. The car had done only 900 miles in the 10 years he had owned it!”

The equally affable Sterling followed a similar path to Ferrari ownership, even if he hadn’t originally planned on becoming a track warrior. “Over the years, I had many low-value Fiats and Alfas and can clearly remember a Classic & Sportscar magazine front cover featuring a Ferrari 308 GT4 with the strapline ‘A Ferrari for the price of a Mondeo’,” he muses. “That got me thinking. 15 years later, I just about managed to scrape together enough cash to buy a 308 GT4 which, because it had been used for racing, appeared to be a bit of a bargain. I paid pretty much what had been spent prepping the car to race. There I was with a ready-to-race Ferrari, so what could I do! I should mention the Ferrari Owners’ Club racers and organisers were very encouraging and supportive.”

Sterling graduated to the 348 Challenge 16 years ago, the car being one of 59 cars converted in period. It was originally raced by Saverio Castellaneta. The car appears exactly as it did 25 years ago, livery, decals and all. It was resplendent in yellow with blue stripes when Sterling acquired it. “In 2002, following a couple of seasons of racing the GT4, I bought the 348. The car had been with UK-based drivers since 1994, firstly running in the West European Ferrari Challenge and then the Pirelli Maranello Challenge. Ray drove the car during the 1998-1999 seasons, having been a GT4 runner like me prior to that. The smile on Ray’s face after his first race in the 348 could have sold it to anyone! When I got the car, it was in well-thumbed condition, and had a number of battle scars that had only had minimal repairs to get back out on track. I did a bunch of work on the car before it went in for a bare metal respray in 2016.”

Sterling has since gone to great lengths researching the car’s history, going so far as to establish the www.f348ch.co.uk website. “Most of the changes made to the Challenge over the road car were safety-related: they added a roll-cage, cut off switch, fire extinguisher, race seat, harness, different suspension bushes, brake cooling ducts, competition pads, competition clutch, slick tyres and so on. Then it was merely a case of optimising suspension settings and cam timing. I would love to know more about the background to the model. It would appear that a couple of 348 Challenge prototypes, although not designated as such, raced in the Italian GT series in 1992-1993, and I’ve seen a Eurosport video clip of my car taking part. As far as I know, there’s no more than a hint that [Ferrari race car builder] Michelotto was involved. The 348 Challenge cars were assembled at Ferrari dealerships from an official kit of parts supplied by Ferrari. Michelotto, did of course, produce a number of quite famous 348s for Le Mans and so on.”

Both men are evangelical about their 348s, while being refreshingly devoid of pretention. Last word has to go to Ferguson, perhaps the most hardcore fan of the model on the planet. “I love the shape, the size and the strakes in the doors,” he says. “I’ve had so much fun with the 348s and all the comments in the media about them having crap handling is rubbish! They are a bit tail happy when you are racing, but then so are a lot of other cars. It’s all part of the fun!”

Ian Sterling’s superb 348 Challenge is one of only 59 race-spec cars converted by the factory in period. Ray Ferguson’s targa-roof 348 is utterly immaculate. This is actually the second time he’s owned it!