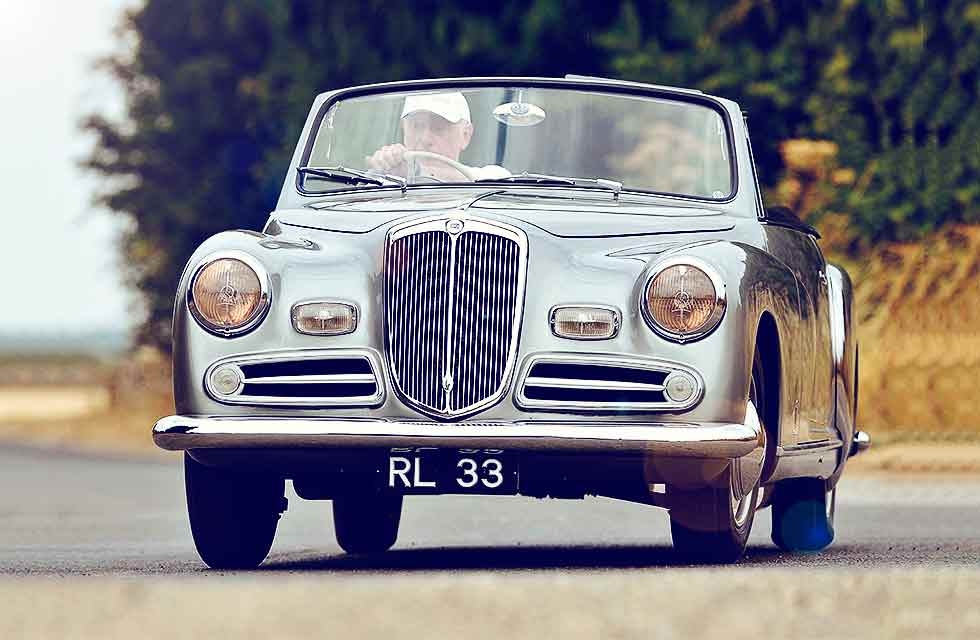 Back to the Future Farina’s gorgeous drop-top Aurelia B50 is a poignant reminder, from nearly 70 years ago, of Lancia’s halcyon days. Story by Simon Park. Photography by Michael Ward.

The time is rapidly approaching when petrolheads at the Vatican (well, it’s a fun thought, isn’t it?) will be preparing a requiem for dear old Lancia: a whiff of incense, a quick Requiem Aeternam and then… well, over and out. The marque’s decline and fall – from producer of some of the world’s most beautiful, exquisitely engineered and sought-after cars to purveyor of just one rather dull and dated supermini (and that, almost certainly, for not much longer) – is a tortuous, sad and familiar story. But let’s not go there; instead, let’s remember the good times.

“Remembrance of things past is not necessarily the remembrance of things as they were,” declared Marcel Proust. Time, certainly, can distort our memories and perspectives. But not always; and just as, for example, the fancifully-named Austin Allegro (‘Adagio’ would have been more appropriate) really was every bit as dreadful as we remember it (if we remember it), so the Lancia Aurelia still enraptures with its repertoire of superlatives from the very first moment of reacquaintance.

Of course, if you remember the Aurelia B50 from back in the day you will now have teeth the length of Pinocchio’s nose. My own memories of it go back merely a dozen years or so, to a sunny day in Milan when we shot one for this august organ. But it wasn’t as nice as the one you see here. Aurelias can, I’d suggest, be divided into two definitive categories: the big, comfy saloons and cabriolets (B10, 21, 50, 52 and so on) and the more compact and sporty numbers (B20 GT, B24 Spider and Convertible). But they all stem from a common seed, sewn in the late 1940s by, essentially, three people.

Gianni Lancia, son of company founder Vincenzo, was just 23 years of age when he became General Manager in 1948. Vittorio Jano, despite his 13 years at Alfa Romeo (during which he designed most of their greatest pre-war models), was sacked by Alfa in 1937 for failing to beat Mercedes and Auto Union on the racetrack. He joined Lancia the following year, becoming Technical Director in 1943.

By this time, multi-talented 31-year old engineer Francesco De Virgilio, who joined the company in 1939, had been tasked with finalising the design of a proposed V6 engine for the Aprilia. De Virgilio’s painstaking research eventually convinced him that, in order to achieve acceptably smooth, vibration-free running, such an engine had to have a V-angle of either 60 or 120 degrees. But not even 60 degrees could be accommodated under the Aprilia’s narrow bonnet; and a 45-degree prototype – which could – was deemed insufficiently refined. So towards the end of 1948, Gianni Lancia, impressed by De Virgilio’s diligence and reasoning, finally consigned the illustrious 11-year old Aprilia to history and instigated development of a replacement with enough engine room for a 60-degree V6.

The shape of the original B10 Aurelia saloon owed much to a special-bodied Aprilia designed by Pinin Farina, and he too played a major part in the new model’s success. The dashing, monocoque B20 and B24s are undoubtedly the finest feathers in his Aurelia cap; but like most of the leading carrozzerie of the time, Farina also availed himself of the separate chassis produced by the factory, alongside the mainstream monocoque saloons, to cater for coachbuilt variants such as this.

The B50 was there right from the start, 485 being produced between 1950 and 1952. It shared with the B10 all of the radical features which set the Aurelia apart from its contemporaries, and which induced amongst motoring cognoscenti the reverence which endures to this day. The all-alloy 1754cc engine was the first V6 to go into series production anywhere. It provided a modest 56bhp at 4000rpm, which was transmitted via a four-speed gearbox (with synchromesh on the top three) nestling with the clutch, final drive and inboard drum brakes on the rear transaxle. At the front, suspension was by the familiar sliding pillars (which had first appeared on the Lambda, in 1922), but the rear end featured a new independent set-up, with semi-trailing arms, coil springs and hydraulic dampers. The final touch was the revolutionary new Michelin X radial tyre – well, four of them – which contributed hugely to levels of handling and roadholding unprecedented at the time.

The example we have here is a little bit special, having been built in late 1950 for the 1951 Geneva Salon. It was bought off the show stand by an English lady, the magnificently-monikered Anna (Nancy) Cobleigh Payne-Jennings, for 32,531 Swiss Francs (around £155,000 in today’s money). Sadly, she died within a year and it was then purchased by a Mr Jenkins of Richmond, Virginia, who was visiting England. Jenkins and his wife then embarked on an extensive tour of the UK and Europe, during which they visited the flamboyant coachbuilder Jacques Saoutchik, in Paris. Saoutchik added some signature features – chrome flanks on the rear wings, extensive chrome work to the hood frame and door shuts, plus perforated silencer covers and built-in Marchal auxiliary lamps.

It remained with the family at their Palm Beach home for 43 years until Jenkins died in 1995. It then passed to his son Todd, who in 1996 sold it to Rick Fitzgerald, a professional car restorer. He undertook a slow and careful restoration, finished just in time for the 2005 Pebble Beach Concours d’Elegance, where it was placed third in Class. He had undertaken the restoration to a very high standard for his own personal use. Sadly, he then found himself getting divorced, enforcing the car’s sale and subsequent return to the UK.

It’s still as spick and span as you could wish for, and a joy to behold. Overall, the cabriolet’s lines are pleasingly clean and uncluttered from every angle. The extra four inches of wheelbase compared to the B10 saloon are clearly evident in side profile. Given the amount of legroom this provides in the back, you do wonder why the two rear seats are of the ‘occasional’ variety, with meagre fold-down squabs revealing nonexistent backrests – there’s easily room for two comfy armchairs back there. But two people would not go short of luggage space, as this car’s suite of suitcases clearly demonstrates – they weren’t even in the boot.

Saoutchik’s adornments aside, the detailing of hand-made Italian cars of this period is invariably exquisite, and so it is here. The wonderfully delicate fold-out door handles, stylish internal door cards and furniture, the T-spoked cream steering wheel and the unusually neat and tidy (for the period) disposition of switchgear on the painted dash are all soothing on the eye, no doubt helping to convince the owner that her/his not-inconsiderable investment was justified. Instrumentation is simple – clock, fuel and oil-pressure gauges, and a speedo marked from ‘2’ to ‘14’ (or 20-140km/h) – supplemented by a slightly awkward after-market temperature gauge attached to the bottom of the dash. Tellingly, there is no rev counter.

The front seats promise considerably more comfort than those behind, and they deliver. The lack of lateral support might be an issue in a B20; but here, as I’m about to discover, you’ll not be too concerned about bracing yourself against high cornering forces. Firing up the V6 brings a bit of a shock: the stately cabriolet comes on like a pur-sang racer, the raucous growl from the rear a tad incongruous, and Very Loud. Somewhat taken aback, I must now address myself to the steering-column gearchange. These infernal things don’t improve with age, but the Aurelia’s is tolerably slick – first and second nearest the dash, the top two towards you. The clutch is friendly; takeoff achieved without drama.

Now we do go back in time, and need to reacclimatise to steering with a certain amount of free play around the centre, and a graceful, floating quality to the ride. I’m not expecting much from the unassisted drum brakes, and I’m not pleasantly surprised. But think well ahead and the heel-toe double-declutch that’s advisable on downchanges is none too difficult to achieve. Apply some lock and the steering acquires a much greater degree of certainty, commanding neutral turn-in – at ‘sensible’ speeds, I should add – aided greatly by those new-fangled Michelin radials.

In truth, 56bhp is not a great deal in something this size and weight (around 1240kg) and progress rather belies any expectations raised by the rorty exhaust. (The thought of a B50 with the later 2.5-litre V6 and double the power is tantalising. Heresy to the purists, of course.) And maximum power-at-all-costs was never a priority for Lancia, which was always more concerned with driveability, handling and balance. That so many distinguished racers elected to drive Aurelias in period is an impressive vindication of that philosophy. But almost without exception, they went for the B20 GT, which offers a far more focused driving experience.

Whether the likes of Fangio, Collins, Behra and Hawthorn would have been as happy in the B50 is conjectural. Somehow I doubt it; she is very much the grande dame to the B20’s flighty floozy. Here, dignity is paramount – she’d much rather not have to lift her skirts and make unseemly haste. But go with the flow, sit back and enjoy the details, the ambience, the view, and you’ll very quickly feel that the world is an altogether better place for it. The B50 has a timeless quality about it which transcends past and present. Proust’s compatriot Coco Chanel put it well: “Fashion fades, only style remains the same”.

THANKS Our thanks go to The Classic Motor Hub, which is offering this fabulous Aurelia for sale. Tel: 01242 384092. Web: www.classicmotorhub.com

“It’s a joy to behold. The cabriolet’s lines are pleasingly clean and uncluttered from every angle”