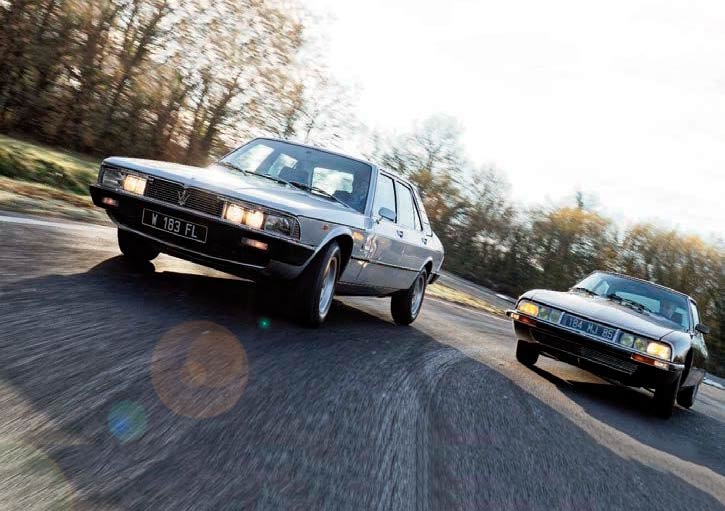 Strange Sisters Maserati QP Bizarre QPII. The extraordinary Quattroporte II was the only Maserati ever to have front-wheel drive. But why were only 13 examples ever made, and how does the QPII compare to the car that donated its parts, the Citroën SM? Words: Axel Catton. Images: Bernard Canonne.

A front-wheel-drive Maserati saloon with a 190hp V6 engine, super-soft hydropneumatic suspension and, er, five wipers? Sounds like it must be a joke. But it’s completely true: there really once was a Maserati like that.

The Quattroporte II is one of the strangest Maseratis of all – and one of the rarest. According to Maserati Archive boss, Fabio Collina, the company only ever made 13 examples of the QPII from 1974 to 1978. Just four are known to have survived, only two of which are on the road. One is in England (on the Isle of Man) while the other is the car pictured here, which lives near Nantes in France.

But how did technology like front-wheel drive and spring-less suspension find its way into a saloon from this rather conservative brand? Because the QPII was developed while Maserati was owned by Citroën, and using the Citroën SM’s drivetrain seemed like a logical move. At the end of the 1960s, Maserati – like many small high-end manufacturers – found itself in a financially perilous situation. While the marque had made history with models like the 3500GT and the 5000GT, it couldn’t cough up the funds to finance new developments.

At the same time, Citroën was looking for a suitable drivetrain to power its upcoming flagship GT. The French purchased a majority stake in the Trident badge and immediately set chief engineer Giulio Alfieri to work on a V6 engine. The 2.7-litre six-cylinder unit, internally dubbed project C114, was slated for use in the SM due to be launched in 1970. On the other hand, fresh French capital allowed the Italians to start thinking about new models of its own.

Work on the Quattroporte II started at the beginning of the 1970s, after the first-generation Frua-designed QP had already reached the end of its life. Originally, Alfieri had considered a V8 layout by adding two cylinders to the SM’s V6, but in the end costs meant that almost the entire mechanical setup of the SM was used for the big saloon. Of course, the dimensions were entirely different, as the QPII was meant to be luxury saloon with a wheelbase of almost 10 feet.

The Maser’s front and rear track at 152cm and 149cm were in contrast to the SM’s, which famously had a much narrower track at the rear. In charge of the design was Marcello Gandini at Bertone, who had already made a name for himself, having penned the Lamborghini Miura, Espada and Jarama, as well as the Iso Lele. In pictures, the QPII looks a bit out of proportion, primarily because of its long wheelbase and low height, exaggerated by another Gandini hallmark – chromed sill covers. The front end lacks the typical Trident grille, while no fewer than three windscreen wipers, and six front lights with another two wipers, all look a bit fussy. The two inner lights swivel with the steering, as on Citroën’s DS and Citroen SM models.

Auto Italia wanted to learn more about this unique Italian saloon so we travelled to Nantes to compare it with its donor, the SM. As it happens, the Maserati’s owner, Bernard Guénant, is not only a fan of the Trident marque but is also a dealer for Maserati, Citroën, BMW and Mini in La-Roche-Sur-Yon. Here we met up with the silver prototype of this stillborn series (internal code AM 123), which was the very car displayed at the 1974 Paris Salon. According to Monsieur Guénant, this was also the car used for the publicity shots in the extremely rare QPII brochure. The metallic brown 1971 Citroën SM is also owned by our gracious host. “My dad was a Citroën dealer as well,” he says proudly, “and he never sold this car. It’s been in our family since new.”

First up, we have a good look around the silver saloon. Straightaway, we realise it’s much more imposing in real life than in pictures. At 513cm long, the QPII is huge – some 7cm longer than even the Mercedes-Benz 450 SEL W116 of the same year. Gandini’s playful styling elements, like the fuel filler hidden behind a Trident badge, appear like ornamentation on an otherwise rather stark-looking body. As with the SM, the headlights are hidden behind transparent covers. At the rear, you notice the emphasis on the middle line expanding like a sculpture to the outside, giving the otherwise flat surface some much-needed contours. The rear lights are from the Lancia 2000 saloon and seem a bit small, resulting in that massive rear looking weaker than the front.

On the inside, the dashboard is hewn out of solid wood, harking back to the 1960s and the tastes of Maserati’s affluent clientele. In front of the driver is a collection of seven Jaeger instruments flanking a central speedo, which is calibrated at an optimistic 280km/h (174mph). The inviting interior is covered in marine blue leather, with the rear bench seating three passengers. There is ample legroom thanks to the long wheelbase and the complete lack of a transmission tunnel. While there is also a large sliding roof, the owner comments: “I wouldn’t open it as I don’t know if it would close again!”

Under the bonnet, there’s an unusual sight: green balls everywhere. That’s the Citroën hydropneumatics system. All in all, this Maserati is as Italian as a sauvignon blanc.

We’re keen to understand why only 13 examples of the QPII were ever made and why owner Bernard Guénant runs his Quattroporte on black dealer plates. “This car was developed during the time of Citroën ownership,” explains Guénant, “but by the time it was finished, the French had already ended their adventure in Italy and Maserati was now owned by Alejandro de Tomaso. He had no interest in the complex Citroën development which would have required him to purchase the running gear in France at great expense. It would be fair to say that the 13 units built were all prototypes. As a result, this car never received European type approval. The majority of cars were sold to the Middle East, and a few to Spain which wasn’t yet part of the EU.”

In fact, Guénant found this car in Spain a few years ago and imported it to France. Since then, he has overhauled the mechanicals and repainted it in its original colour – but other than that, it is exactly as he found it.

We start out driving the SM, as this is the car that started it all in 1970. It measures just 133cm high but offers surprisingly ample space up front. The space age captain’s chairs would look good in any car sold today, even if they’re far from comfortable in reality. Compared with the Maser, the Citroën’s dash with its oval dials looks more futuristic; the speedo even has a brake distance indicator.

The 2.7-litre V6 starts on the button with a suprisingly raspy tone emanating from the two widely spaced exhaust pipes. The five-speed manual gear lever runs in a gorgeous metallic shift-gate.

Acceleration is unexpectedly brisk and we quickly got used to the infamous Citroën button-type brake pedal and the single-spoke steering wheel with its strong self-centring action. The radio’s odd location between the two front seats shows that dashboard space was at a premium for the SM.

Now for the Quattroporte. Compared to the SM, the Italian boudoir offers a lot more space, wider seats, and more headroom and legroom. It’s obvious that the QPII was aimed at the affluent owner-driver. Even though the exhaust note is very similar to that of the SM, in the Maserati it sounds raunchier and more rebellious.

The QP accelerates smoothly and without fuss, but it is by no means fast – perhaps one of the reasons why De Tomaso had no interest in moving the project further. With only 190hp on tap, it takes a full nine seconds for the QPII to reach 60mph, so it’s not so much a sports saloon, more a cruiser. The hydropneumatic suspension is Citroën all the way and does an even better job here than in the lighter SM. But the Maserati feels softer and leans massively in corners, even at ridiculously low speeds. In fact, below 30mph the body is tilting like a 2CV and the driver risks sliding off the wide leather seats. It’s impossible to navigate the car around roundabouts at any sort of speed without tyre squeal – slightly embrassing for a car of this pedigree.

However, thanks to the power-assisted steering, there is little hint that this car has front-wheel drive. I can imagine hard acceleration on wet surfaces might pose a few problems, though.

Overall it’s not hard to understand why the production run ended at 13. “This is not a massively sought-after car despite its rarity,” states our host. “For some it is just not powerful enough, while most people just don’t know anything about it.”

That’s a shame because, as we drive our photo cars at speed back to their storage location, it’s obvious just how much effort went into the development of the Quattroporte II.