PORSCHE 911 R 1967 A POWER-TO-WEIGHT RATIO OF FOUR KILOS PER HORSEPOWER STILL STANDS UP WELL TODAY. IN 1967, IT MUST HAVE BEEN EXPLOSIVE.

A dry weight of 800 kg and 210 horsepower means just under 4 kg per hp – a whole 1.5 kg less than the closest competitors at the time. With its low weight Porsche could dominate the GT class, just as the 356 Carrera had done previously. In October 1966 a first test car was built, which was driven both on the new skid pad in Weissach and at Hockenheim. The tests were extremely successful and showed the great potential of the car. With a lap time of 2.17.5 minutes, the 911 R was actually only twelve seconds slower than the lap record set by a Porsche Carrera 6. The time was extremely impressive, particularly since the Carrera 6 was a genuine Group 4 racer that competed in the world championship. 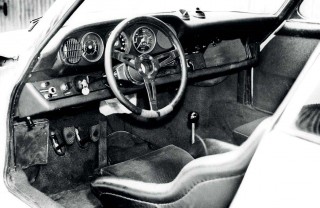 The 911 R had a six-cylinder engine that was very similar to the one used in the Porsche Carrera 6. The type 901/22 engine, which was equipped with dual ignition, titanium connecting rods and two triple carburettors, had a power output at 210 hp of 8,000 rpm. The 911 R managed zero to 100 km/h in 5.9 seconds and one kilometre from standstill in 24.2 seconds – one second faster than a Porsche 904 Carrera GTS and a full five seconds faster than an Alfa Romeo GTA. In 1967, four 911 R prototypes were ready. The doors, bumpers, front lid and front wings were made of glass fibre reinforced plastic parts manufactured by the Stuttgart-based company Karl Baur. The weight reduction could be seen in several places. The windscreen was made of four millimetre thick glass, while the rear and side windows were 2 mm thick plexiglass.

Purism in its purest form, what was not absolutely necessary was left on the shelves. The interior was further trimmed down with, for example, two of the five instruments, the ashtrays and cigarette lighters and passenger side sun visor, being removed.

The crank mechanism for the side windows was left out and was replaced with leather straps. Compared to a standard 911 S – which is anything but a heavyweight at 1,030 kg – they had managed to strip off 230 kg. The fact is that the 911 R is the lightest “normal” 911 ever and, with all the safety and technology built into today’s cars, is likely to remain so for all time. However, Porsche were uncertain regarding production volume for the 911 R. With an estimated sales price of 45,000 D-Marks, a 911 R was almost twice as expensive as a standard 911 S when it was launched. And considering the economic recession in the middle of the 1960s, the volume of 500 cars needed for a GT homologation was a distant dream. In May 1967, Porsche’s management finally decided to build just 19 911 Rs. 15 of them were to be sold to customers, while the remaining four would stay with Porsche. Since homologation was impossible, the factory decided to enter the two-litre class for prototypes (GTP). The 911 R made its racing debut in July 1967 at the Mugello circuit in Italy. It came in third after two Porsche 910 race cars. The drivers of the 911 R were the Brit Vic Elford and the Dutchman Gijs van Lennep. 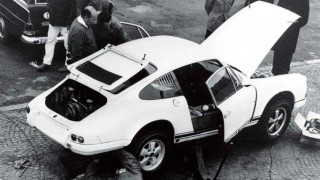 Their finishing position meant not only that they had beaten all the Alfas – they had also beaten a Ford GT40 Mk III, which finished in fourth place. The car also took part in a number of other races over the years. For example, Vic Elford won the “Rallye Coupe des Alpes” in 1967 and, in 1968, the podium place at Mugello was repeated.

In 1969, Gérard Larrousse won the “Rallye Neige et Glace”, and the success were followed with further overall victories in the “Tour de Corse” and the “Tour de France” for Larrousse. In the autumn of 1967, a 911 R attracted a great deal of attention. The reason for this was the four Swiss: Jo Siffert, Dieter Spoerry, Rico Steinemann and Charles Vögele. They decided to break a number of world records at the Monza circuit.

Initially they had planned to drive a Porsche Carrera 6, but it soon proved unsuitable for the task and Porsche quickly sent a 911 R as a substitute. Not only had the car been driven from Zuffenhausen in Germany to Monza in Italy on its own wheels, the engine had already done 100 hours on the dynamometer. The only preparation necessary was a change of gear ratio. To avoid too much wear on the highest gear during 96 hours at full throttle, fourth and fifth were equipped with the same gear ratio. The record attempt took place in November 1967 and lasted three days. After 20,000 km they had set five new world records and 14 international records – all at an average speed of over 200 km/h… 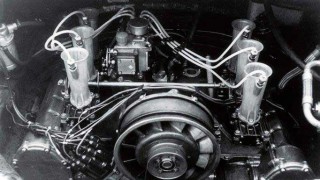 Early 911s don’t get any lower and meaner than this. Note the small and extra-light indicator lights. On the previous page we see Gérard Larrousse on the way to one of his victories in a 911 R.