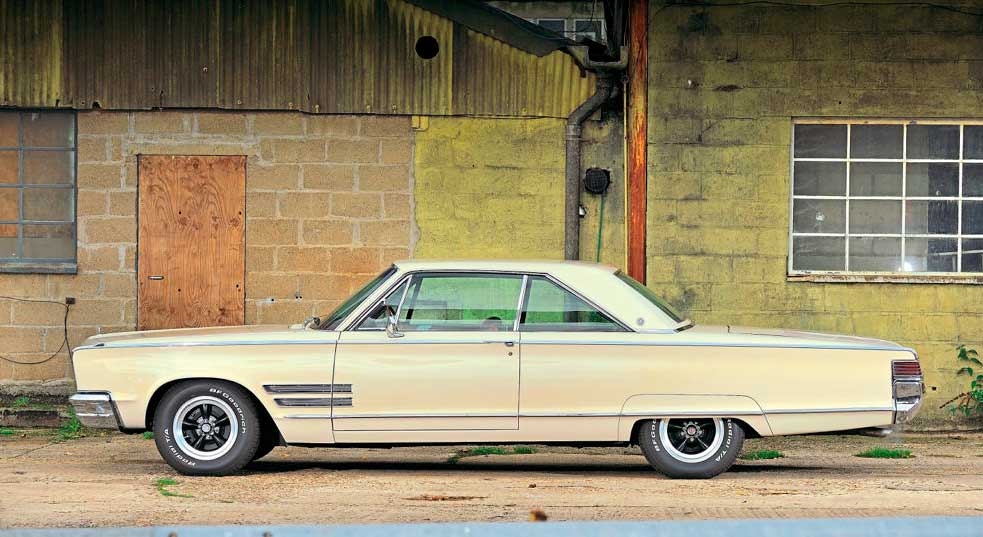 White Lighting Chrysler’s Magic Number. Paul Elvin bought this 1966 Chrysler 300 partially because he adored its fantastic interior, but before long he loved everything about it… 1966 Chrysler 300  Words: Mike Renaut. Photography: Matt Woods.

Growing up in Norfolk with a father who owned American cars, it was almost inevitable Paul Elvin would later buy one of his own. “I’ve been into cars my entire life, my dad had American cars that were usually a few years old and I got taken to school in them. I remember various mid-Sixties Chevrolets, a 318cu in Valiant wagon and particularly a 1963 Thunderbird coupe with a red interior – I cried when he sold that.” That ’63 had quite an influence: “I bought a 1966 Thunderbird convertible,” says Paul. “It was my first ever classic car and I spent a fair bit of time and money on the engine and the roof. They have a complicated top mechanism that has its origins in the Skyliner retractables and they need to be properly maintained. I’m a bit of a purist so I made the Thunderbird into a very nice car and that was part of the problem – it got too good to use regularly. I couldn’t leave it parked anywhere and it became a real ‘fair weather only’ classic.

“I’d always fancied a 1963 Thunderbird, so after 18 months with the ’1966 I started looking around at other cars,” remembers Paul. “I wanted something usable, but different. My other big interest was Mopars and I saw this 1966 Chrysler advertised on a classic car website. It turned out the seller, Jonny Lang, was very keen on Thunderbirds, so we met for a chat and he ended up trading me the Chrysler in exchange for some cash and the Thunderbird.”

That was in April last year. Because Paul wanted a car less pristine than the Ford it’s easy to assume the Chrysler was in poorer shape – but that’s evidently not the case. “It’s in very good condition. When I bought it the Chrysler had stock steel wheels and dog dish hubcaps – it looked like a stock car. But when I saw the red vinyl interior I instantly fell in love with it.

“I hadn’t seen a two-door ’66 in the UK,” continues Paul, “they built a little over 24,000 of this 300 model that year, but they didn’t ever become as desirable as a collector car in the same way as, say, a Road Runner did. Quite a few 300s got wrecked on race circuits or in demolition derbies.” That means some parts are now tricky to get hold of and Paul admits he’s a bit of a perfectionist when it comes to his cars. “I bought a lot of the parts from Murray B Park (www. cbodies.com) in Tiffin, Ohio. I’ve got a new dashboard pad coming because the old one has cracked, I replaced the original Carter carburettor with an Edelbrock and added electronic ignition.

“Just little things that make the car more usable but don’t detract from the original looks. The rear window rollers were broken so I replaced them to allow the windows to wind up and down, happily I also found that rear seatbelts were fitted but they’d been tucked out of the way so I was able to take the kids out safely in the car.” The way the 300 drives is one of Paul’s favourite things about it: “Compared to my Thunderbird it obviously feels more solid because there’s none of the scuttle shake you get in a convertible, but the Chrysler has no rattles either and it uses no oil. It seems like a really well cared-for car, which drives beautifully.”

The Chrysler 300 capitalised on the name of one of the world’s best performance/luxury cars of the time, the 300 letter series that began in 1955 with the 300A. The 300 provided a similar look and name without the high price. The body ornamentation was different from the other models and vinyl bucket seats suggested a sporty image. Paul’s is one of the 24,103 coupes produced in the 300 series for 1966 making it that year’s best-selling model in the 300 range. The previous year had seen a completely redesigned body so the ’66 Chryslers were little changed beyond trim and minor front and rear tweaks. The 1965 300s had headlights mounted behind glass but the idea only lasted a year. For 1966 each side of the car got a pair of thick chrome stripes behind the front wheel that extended into the door.

Looking at the Vehicle Identification Number (VIN) we can tell this Chrysler rolled out of the Newark, Delaware plant with a projected build date of September 30, 1965. According to the Certicard that’s still tucked away next the battery on the radiator panel the first owner was Frank P Zahner of Walnut Grove Road, Tennessee. The Certicard was used from 1966 through to 1968 and was for the dealer to refer to during warranty repairs. It includes equipment, trim and paint codes and, on removable Dymo labels, the original owner’s name and address.

Mr Zahner didn’t stray far over the showroom sticker price of $4005, opting for tinted glass and air conditioning – clearly he lived in a hot climate, which ties in with the choice of Ivory paint – and those aforementioned seatbelts. He decided against the optional power windows, power locks, a Positraction rear axle, exclusive 300 centre console, underseal or even a radio – the radio delete panel is still in place in the dashboard. An automatic transmission was specified however – the three-speed Torqueflite – and it was bolted to the standard 383cu in, 325bhp V8. Is it much of a stretch of the imagination to picture Mr Zahner was perhaps more senior in years? He clearly appreciated the styling of a two-door coupe and the luxury image of the 300 badge – maybe he’d even owned a few Hemi 300s in the past – but felt no need to go with the performance options of a four-speed manual ’box or the newly introduced 440cu in, 365bhp V8.

“The car was shipped into the UK in 2014 from Texas,” explains Paul, “having been with the same family in Memphis for 10 years living just off Elvis Presley Boulevard. I understand they repainted the Chrysler in the original white, pulled the engine out and redid the engine bay and boot interior. It’s a matching numbers car, which was part of the appeal for me. The paint was quite heavy in places though, especially around the rear window where it had started to crack, so I had the roof repainted.”

There’s some 44,000 miles showing on the odometer. “It must be 140,000,” says Paul, “although the Chryslers used plastic wheels on the cables and they are notorious for breaking with age so it would be hard to tell for sure.”

Sadly the 300 came with very little history and previous owner Jonny no longer has any contact details for that family. “Personally I think that it’s 45,000 given the unworn, original interior,” says Jonny, “but the car was stripped completely for painting so perhaps they removed the engine to rebuild it because it was on 100,000 miles-plus? I’m genuinely not sure.”

“I also upgraded the brakes because the original spec from the factory was drums all round with no servo,” continues Paul. “I considered putting on the discs from a 1971 Polara but in the end I wanted originality, so I got a new master cylinder and added the brake booster that was an original option. That also meant fitting a new brake pedal. It’s a heavy car and power brakes give me a far better chance of stopping it quickly!”

The Chrysler also got a new starter motor and a complete front suspension rebuild. “Some of the bushes looked a bit worn so I thought I might as well replace everything while it was apart. I took the car to Mike Wood at Mustard City Speed (www.mustardcityspeed.co.uk/01603 623 428) and he did a lot of the work I’ve mentioned. Mike really liked the Chrysler, saying ‘if every car I worked on was this good my life would be very easy…’”

Paul hasn’t finished improving the Chrysler yet. “I’ll replace the foam in the front seats since they’re sagging a bit and I’d really like some new tail-light surrounds, but they’re like gold dust.” Isn’t Paul in danger of ending up with another car that’s too nice to use? “I’ve bought a 1972 Ford F100 long wheelbase pick-up to use as my bad weather classic,” he admits. “I keep the Chrysler out of the rain in the garage and it’s become more of a summer car, although it gets regularly used for shows.” Not that Paul’s exactly slumming it in his pick-up since that has a 390cu in V8 and four-speed Toploader…

Thanks to Beverly Austin Newton of Wensum Valley Restorations and Ant Skipper of Bears Grills for allowing the use of the Lenwade site for photography.

Pristine interior gleams in the sunshine. Fantastic linear rear profile. Gorgeous clam shell bucket seats. Central filler means it can be refueled either side of the pumpl. Despite being a coupe, there’s room for at least two sets of golf clubs. 325bhp 383cu in V8. Original Certicard. Lucky man – owner Paul Elvin. Aftermarket wheels and BFGs. Chrysler 300 nameplate was revived in the Seventies briefly on what was a Cordoba. Ribbed contoured tail-lights are reminiscent of a GTOs.